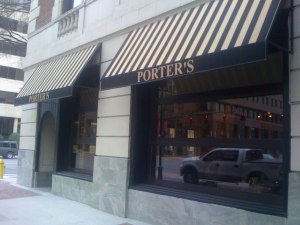 IMPRESSIONS: Porter’s Steakhouse is primarily an upscale restaurant attached to the Read House Sheraton, an historic hotel now owned by the Sheraton chain. The hotel itself is amazing – a mix of classic architecture with modern amenities. Beth and I stayed here on our recent visit to Chattanooga, Tennessee, and the quality of the hotel ready made the trip. Porter’s has made a name for itself as a steakhouse; apparently their peppercorn steak is famous. I don’t know if Porter’s breakfast is open to the public, or reserved just for hotel guests. We didn’t have to show a room card, and you can access the restaurant from the hotel lobby, so I’m guessing it’s opening to anyone.

Beth and I visited on a Saturday and Sunday morning, when Porter’s does a breakfast buffet. My understanding is that you can order a regular breakfast at that time, too, but most patrons opted for the buffet. The menu online lists fruit, pastries, eggs, meat, potatoes, grits, a waffle station, and biscuits and gravy. In actuality, the buffet had French toast instead of the waffles (and waffle stations are so exciting, aren’t they?).

ATMOSPHERE: The atmosphere is mostly that of an upscale restaurant, with a dash of buffet thrown in. Now this definitely isn’t a Golden Corral/Ponderossa type of buffet (read: long lines of overweight people stuffing themselves with crab legs), but it is a buffet nonetheless. Still, you do get the feeling of eating in a nicer restaurant: cloth napkins and table clothes, high-backed chairs, well-dressed waiters, a host to greet you, and the like. It fits with the overall atmosphere of the hotel. 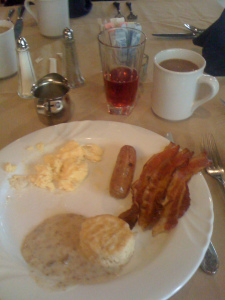 FOOD: There are always downfalls to buffets, but Porter’s manages to avoid most of them. In fact, it’s one of better breakfast buffets I can recall trying, although my preference is definitely for traditional fare. Buffets are handy if you want to try a bunch of things, or if you want more of one item than another. But they usually mean that food sits longer before it is eaten, or that it’s made generically from pre-packaged items. That was the case with a few of the items at Porter’s. 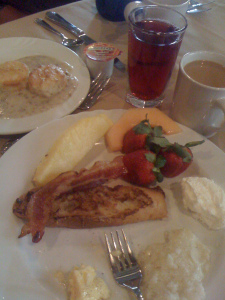 Here’s a basic run-down of what we tried and what we thought. Probably the best part was the fruit: crisp melon and pineapple, fresh strawberries. Beth was a big fan of those. That’s great for a buffet, and in January. The potatoes were fine (again with the onions and peppers – a Southern thing? Some tell me.). The scrambled eggs were good, depending one where you scooped. If you found the right spot, you get them just the way I like them: just a tad runny. If you looked to the sides of the tray, you get them too dry. The grits were a little greasy, the biscuits quite good, and the sausage gravy above-average, as were the bacon and sausage. I opted for the sausage links over the patties. I just don’t trust sausage meat in patty form… 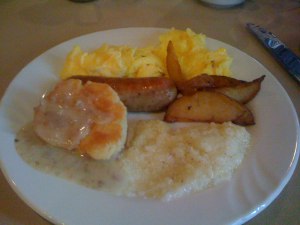 The French toast was too dry the first day, but nice and melty the second. Again, you never know with buffets.

SERVICE: At Porter’s you’re welcomed with a smile by the host, seated promptly, and given the same amount of attention as you would be given in a regular restaurant. You are on your own to go up and get your food. So if you’re hungry, there’s nothing stopping you! The restaurant was never too busy while we were there, and the crew kept the buffet well-stocked.

OVERALL: I usually don’t seek out buffets for breakfast (although they’re appealing, no?), and I found myself surprised to review one. And while Porter’s hasn’t made a name for itself for its breakfast buffet, theirs is certainly above-average. They limit the menu adequately, if only to keep themselves from having to cook so many items. If you’re staying in Chattanooga (especially at the Read House), it’s a great way to begin the day.