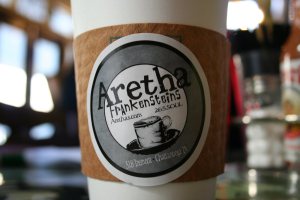 IMPRESSIONS: This is the third and final breakfast review from Chattanooga, Tennessee. When Beth and I were planning our trip, Aretha Frankenstein’s popped up on all the websites, on the Food Network, and in friends’ recommendations (particularly my friend Matt Dunmore). So, on our final day in town, we hit the place up for some early-morning grub.

Aretha’s is a really fascinating place, not only for their fun menu, but for their interesting location and history. The restaurant is in North Chattanooga, on the north shore of the Tennessee River, close to Coolidge Park and the Chattanooga Theatre Centre, with it’s very Short North-like burgeoning arts district. 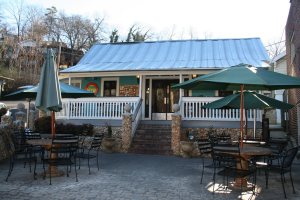 The restaurant is in an old house in a very residential neighborhood. There’s parking to be found, although you may have to explore some side streets, and be prepared to use that parking brake – it’s hilly! We actually drove by Aretha’s the first time we went looking for it; it’s slightly set back off Tremont. Out front is a wide patio, and the building itself has a big porch. I’ll bet it’s great to have breakfast out front in the summer.

Be sure you check out Aretha’s website. It’s a bit spotty – not everything works on it – but there’s a message board to post your thoughts, a downloadable menu, some photos, and a collection of videos. The videos are the best part. There’s the feature from Rachel Ray’s visit to Aretha’s, plus videos of the fire that gutted the restaurant a couple years ago. Apparently the restaurant burned badly in April 2006, and the owner immediately set to work restoring and reopening it – the fact that they’re doing well speaks to the customer loyalty. The fire videos include a security camera recording of the fire itself, plus some great clips on the clean-up and rebuild. Worth checking out. When you visit the place today, you wouldn’t imagine it had burned so badly.

ATMOSPHERE: We visited in January, so the patio and porch were closed. This left about four or five tables, plus a long bar in the center of the restaurant. Many of the reviews I’ve read mention Aretha’s being pretty busy in the mornings, but we found a table immediately when we arrived. (This may have been b/c of the Martin Luther King, Jr. holiday.) 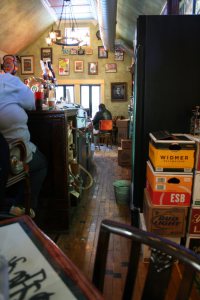 The inside of Aretha’s is a fascinating piece of eye candy. It’s full of so many knick-knacks and chotchky: there’s a flat screen TV in a picture frame above the bar. Movie posters, board games, and posters for musical acts line the walls; many of the posters feature Frankenstein’s monster. Two chandeliers hang from the ceiling, and a dual set of oscillating fans hangs from the center. Probably the coolest part is the floor – the owner purchased an old gymnasium floor and installed it. The visit is worth seeing that alone. 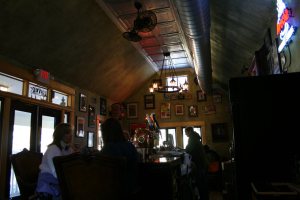 Here’s another shot – it turned out a little darker, but gives you a sense of the size. Boxes of supplies line the back walls. In addition to being a happenin’ breakfast joint, Aretha’s serves up lunch, dinner, coffee, and drinks until midnight each night. So part of the decoration includes coffee creamer and boxes of beer.

FOOD: Aretha’s turned out to be the best breakfast in Chattanooga, and that’s saying something for that city of fine food. Their menu is as quirky as the decor, and a majority of the items are spot-on. 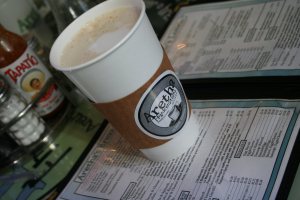 First, here is the Chai Tea Latte. The menu describes it as “delicious,” and Beth declared it “unreal.” It really was something, with some subtle, complex flavors that I’ve never tasted in your typical store-made chai. Other beverages include some very good coffee, which I tried, and rich chocolate milk made with Ghirardelli chocolate. Beth also noticed they serve Tazo tea, which is always a bonus. 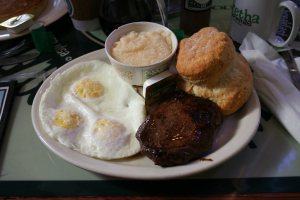 I was in a steak and eggs mood, so I picked the Flat Iron & Eggs. This is an 8 oz. Flat Iron steak with the expected accoutrement. This prompted the discussion as to what is a Flat Iron. It’s a steak, but isn’t it also a building in New York? And there’s a steakhouse in Columbus called the Flat Iron. So what is it? It turns out the Flatiron is a famous building in New York that tapers on one end, where two streets meet at a sharp angle. A quick look at Wikipedia reveals that a flat iron steak is a cut of shoulder from a steer. But the article doesn’t say where they got the name.

End of digression. My Flat Iron & Eggs was quite good, although not perfect. I ordered it medium, but it came out mostly medium well. But I’ll admit that it’s hard to cook such a small piece to order. I liked how well they combined the three eggs over-easy, but they were a little too cooked on one side. Plus, once I started cutting into the juicy steak and the runny eggs, my plate turned into a pretty sloppy mess.

The grits, however, were the best I’ve ever had. Just the right thickness – not cake-y and not runny – with a smidgen of salt and butter. Really good stuff, although they give you such a big bowl that you’ll never finish it.

The biscuits deserve props as well. They’re absolutely huge! Seriously, one Aretha’s biscuit is double the size of every other biscuit I’ve tried. Below is a picture of Beth holding one, to give you sense of their size. 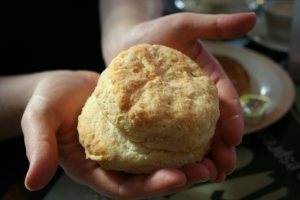 These are great biscuits. Puffy and sweet, with some coarse sanding sugar on top. The sweet taste is unexpected, but delicious. 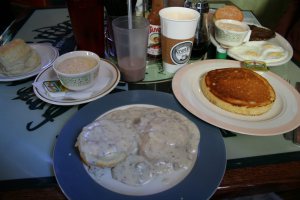 Beth went with a selection of sides. She, too, had the grits, although she didn’t like them as much as I did. She did have the biscuits with sausage gravy. They actually give you two biscuits, which are so huge that they cut one in half to use for the gravy. The gravy was really interesting. I think I liked it, but it tasted more like they used a base of a chicken or vegetable stock. Some nice complexity, and not the typical peppery blend. 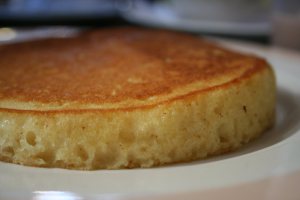 Beth also ordered a single pancake. Everyone we asked in Chattanooga, at other restaurants, at the hotel, etc. recommended trying Aretha’s pancakes. They also told us that we could never finish the tall stack. Indeed, they were right, so we ordered only one. The pancake was nearly an inch thick, and golden crisp. Imagine ordering three of these!

The menu also features interestingly named items such as Shrimp & Grits, the SuperDave Scramble, the Sodbuster, Elephants Gerald, and the Waffle of Insane Greatness! (The exclamation point is part of the name.) Check out the Rachel Ray video for a look at the waffle.

SERVICE: The woman who served us at Aretha’s was very nice. Like the other employee there, she was casually dressed and very friendly – although not as casual as the other guy, who looked like he rolled out of bed and threw on an old army jacket. When I asked her permission to take pictures, she seemed a little nervous, so I tried to be extra nice the whole time. She had nothing to worry about. She was attentive, fast, and friendly. 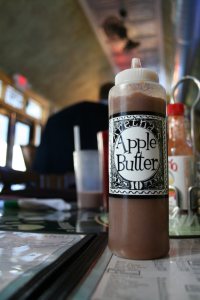 I’m not quite comfortable with taking pictures of people I don’t know yet, so I took a picture of something else. This is not to imply that our server was a container of apple butter.

By the by, this is MY type of breakfast joint: a plastic bottle of apple butter on every table. Try putting it on the biscuits. Mmmm…

OVERALL: Although we were in Chattanooga for a weekend, Aretha’s was definitely the most unique and local breakfast experience. If I were to recommend breakfast places for Chattanooga (which I guess I’m doing now), Aretha’s would be at the top of the list. It’s quirky atmosphere makes for a fun place to enjoy your morning meal, and their food is right up there with the best, and with a large enough selection to please all.

OTHER LINKS:
-> An article about the fire from The Chattanoogan
-> The recipe for the Waffle of Insane Greatness! from the Food Network