Wildflower Cafe
3420 Indianola Ave. (map it!)
Columbus, OH 43214
(614) 262-CAFE (2233)
Open Tuesday-Saturday 7a-9p (bfast served till 11); Sunday brunch served 9a-2p
Accepts cash & debit/credit
IMPRESSIONS: My brother- and sister-in-law Chip and Marcia visited this place in our neighborhood and suggested I check it out. So Chip and I ventured out on a snowy winter morning. Wildflower Cafe is located on Indianola Avenue, one of the main routes through Columbus’ Clintonville neighborhood. The restaurant is set back from the road, and it’s in a smaller building, so it might be easy to drive by. But there’s plenty of parking out front and on the side.
ATMOSPHERE: Wildflower Cafe has the small-diner charm without the diner cram. There are plenty of tables, plus seating at the counter; Chip and I found a table immediately. 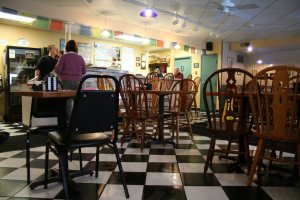 The atmosphere the morning we visited was definitely casual. Of course, the snow day probably helped. In addition to us, the customers included two guys who had apparently just finished a night of snow-plowing, an old couple eating their meal, and two old guys at the counter who had probably been enjoying their newspapers and coffee for hours already. 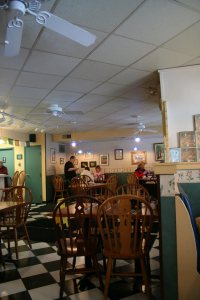 Some of the decor seems the typical of diners: black and white checkered floor, simple lighting and music, and clattering coming from the kitchen. Plus, there’s a definite wildflower theme: pictures, window drapes, and wall stenciling. Chip pointed out all the mis-matched chairs. Fun stuff.

FOOD: I ordered the standard breakfast mix of eggs, meat, potatoes, and some toast. Portions were appropriately-sized, but I would actually have liked more. Eggs and bacon were good, and the potatoes were very nice. They were scalloped, seasoned, and salty. Well done. Other bits of the breakfast disappointed: the toast came out cold and unbuttered. I like having the option to put butter or jam on your toast, but it’s no fun when it’s cold! 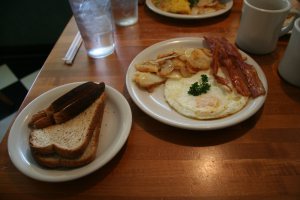 And finally, the coffee was a little weak, or at least a little thin. On a cold February day, when the parking lot is all hilly with packed ice, and your car takes a moment or two to start, I like some bold, robust coffee to warm me up. 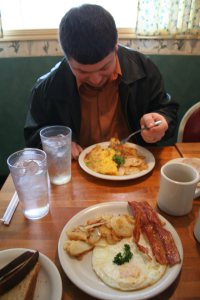 Here’s another shot of my breakfast, and my brother-in-law Chip digging into his omelet. He’s awesome. We’re frequent breakfast buddies. Several of my breakfast discoveries in Columbus I owe to he and his wife Marcia. 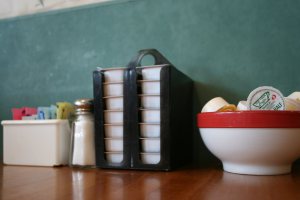 I just had to capture this little setup on our table. This little grouping of creamer, butter, salt, pepper, various sugars and sweeteners, and the little double-tower of jams and jellies is a must-have for any diner. I hope that there’s a company out there, where you can buy your ready-made diner in one complete package. That package would include the creamer-sweetener-jam setup, along with little coffee mugs (preferably an outdated brown, like they have at Jack & Benny’s), tacky placemats, and cheap metal silverware. I can only hope.

SERVICE: The one server working at Wildflower was nice enough, although she acted a little rushed, even though the restaurant wasn’t busy. So it wasn’t the most personal of service, but she took our orders quickly, kept us caffeinated, and brought out our food pronto. 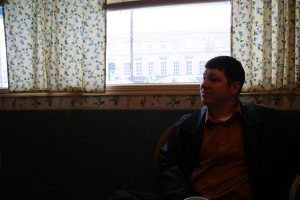 Here’s another picture of Chip. He’s awesome. Notice the floral-patterned curtains behind him.

OVERALL: Yeah, I would go back to Wildflower Cafe again. It’s relatively inexpensive, it’s cozy, it’s close to home. But I feel like it was missing the needed oomph to make it really special diner food. If you want something out of the ordinary, try Northstar Cafe or Banana Bean Cafe. It you want some straight-up diner food, definitely give Wildflower Cafe a try, although I prefer some other local diners over it. 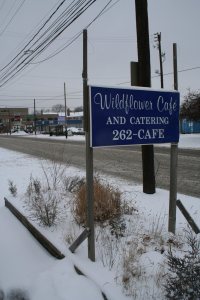