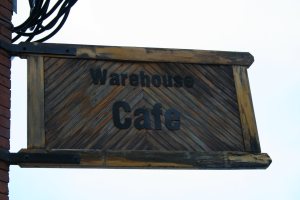 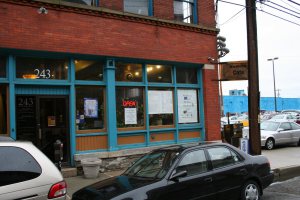 IMPRESSIONS: The Warehouse Cafe is tucked away in northern downtown Columbus, on a side street that’s easy to miss. It first came to my attention when a group of regulars from Columbus Underground started meeting there every Saturday morning. They make the regular trip to support more downtown businesses being open on the weekends. 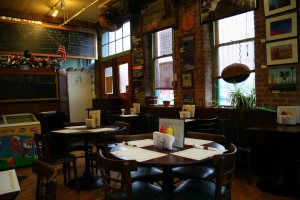 Always on the lookout for more breakfast joints around Columbus, I suggested Warehouse Cafe when Chip asked me to breakfast again. We headed downtown on a chilly March morning. We found parking right in front of the restaurant, then easily found a table in the empty (but bustling) cafe itself. 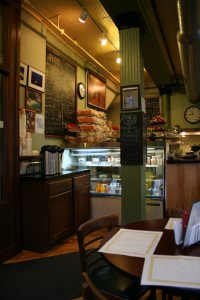 ATMOSPHERE: Even though the Warehouse Cafe was empty when we visited, it hummed with activity. I think it does a brisk carry-out business with the working crowd downtown. Indeed, while Chip and I munched on breakfast, a steady stream of folks came in for sandwiches, salads, munchies, and drinks then headed out the door. 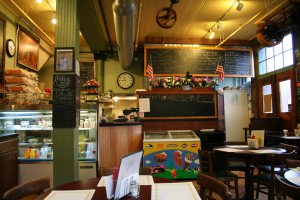 The restaurant itself is right up my alley: it’s pretty small, pretty cozy, with some nice historic touches. The name implies that the building itself may have once been part of a warehouse, and the decor fits that: exposed brick walls, wooden slat ceiling, and a series of old leather cabling along the ceiling (I tried to get pictures but they turned out too dark). The “kitchen” takes up about a third of the space. You can peruse the menus on the table, or order by the chalkboards with breakfast, sandwiches, desserts, and drinks hanging on the walls, then you place your order at the counter (it took us a few minutes to figure that out). Once you order, the kitchen clatters to life. 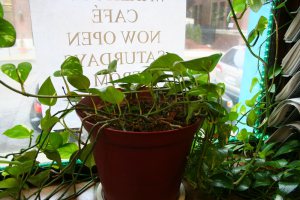 The decor is interesting, too. Black and white pictures of old warehouses and working folks are mixed with potted plants in the windows. A TV hangs high in one corner and blares CNN.

FOOD: Chip and I were so pleasantly surprised by the cheap prices (big selling point here!) that we basically each ordered two breakfasts. We each selected a breakfast platter (eggs, meat, potatoes, toast) and added carbs: Chip took pancakes, I chose French toast. 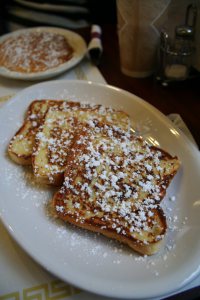 Given that Chip and I were the only two people actually sitting, the breakfast took a little longer to prepare than we expected, but when it arrived, it made the wait all worth it. The French toast isn’t fancy, but it’s dusted with powdered sugar and cooked just right – not crunchy but not mushy. 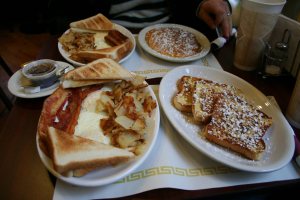 Here’s our too meals together. The syrup (to the far left) seemed like your standard syrup – not all-natural maple syrup – but it was served warm, which is always good in my book. 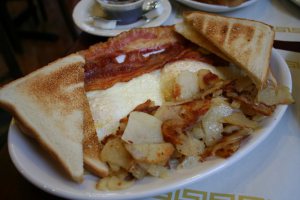 The breakfast itself was just what I’ve been looking for. It’s standard diner fare, but with a little bit of oomph. It just tasted freshly prepared. The potatoes were newly sliced and appropriately salted and peppered. The eggs were spot-on, the bacon had the right crunch-factor, and the toast was toasted just right. All in all, I feel like I’ve been searching for this breakfast for a while. This isn’t fancy food, but it’s top-of-the-line diner fare.

About the coffee… when you order, you’re given a to-go cup and shown to help yourself at the little coffee stand. There’s caf and decaf, plus the whole gamut of sweeteners and creams. Nice setup, but the coffee… kinda rough. I ordered a large (trying to force productivity that day), and I regretted it. The coffee tastes a little burned and a little like it’s been sitting around for a while. I couldn’t see what type of coffee they used, but I doubt it’s freshly ground. So it’s got an acidic burn to it. And it’s probably the most caffeinated coffee I’ve tasted – Chip and I were jittering in our seats when our breakfast arrived.

SERVICE: I read somewhere that the folks at Warehouse Cafe are all from Albania – their accent certainly sounded like it. They’re super sweet, although you don’t see much of them. But you do get a sense that you’re eating breakfast in their kitchen. They greet you when you come in, you look over the menu, then order at the counter. The first time Chip and I went, we didn’t know about the counter-ordering, and not ever table had a menu, so we were puzzled at first. Fortunately, the place is so small, and the counter is pretty obvious, so we figured it out. Once you order, you don’t hear much from the folks until they bring your food out. On our first visit, the food took a while, about 15 minutes, which felt long given that we were the only folks there! But we really didn’t mind – we weren’t in rush.

OVERALL: As I said with the food, I feel like I’ve found something in Warehouse Cafe that I’ve been searching for. It’s just a perfect storm of tasty, very inexpensive food, a comfortable and unique atmosphere, friendly service, a nice, sorta hidden location with some historic touches. I think I would put Warehouse Cafe as a top stop for diner food in Columbus. If only the coffee were better! 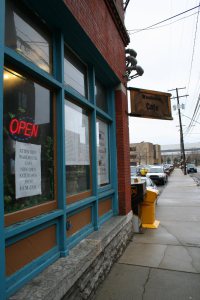 As I mentioned earlier, a group of folks from the Columbus Underground community meet regularly at 10 a.m. every Saturday m
orning. I haven’t yet been to join them, but if you live in Columbus, I encourage you to go. Be sure to support the Warehouse Cafe – we need more breakfast venues in Columbus’ growing downtown.