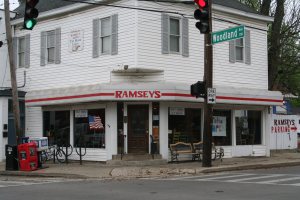 IMPRESSIONS: On a recent visit to some family in Lexington, Kentucky, we hit up a breakfast joint called Ramsey’s Diner. Ramsey’s has five locations around Lexington, and – after unsuccessfully trying one closer to their home – we hit up the location closest to downtown.

Ramsey’s reminded me of a less-kitschy Aretha Frankenstein’s, in that it’s a bar and restaurant that also serves breakfast. We all discussed the tradition of going out to breakfast on weekend mornings, particularly on Saturdays. Most of us grew up with it, whether it was a family brunch after church on Sundays, a group of friends with a weekly meeting, or like my parents, who are Saturday-morning regulars at the Real Food Cafe. But apparently this tradition isn’t necessarily a southern thing. Ramsey’s, despite being known as a breakfast joint, doesn’t open until 10 a.m.! In my mind, a true breakfast joint opens around 7 a.m.

ATMOSPHERE: From the outside, Ramsey’s seems like an easy-to-pass corner pub, and the inside kinda reflects that. Again, echoes of Aretha Frankenstein’s here. The low ceiling and dark-ish lighting, long bar with rows of bottles and taps, and wall pictures – combined with the wooden tables and chairs – gives a bar-like feel with a dash of family restaurant to boot. 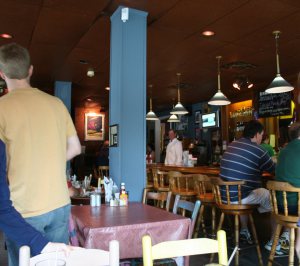 Hoping for an earlier breakfast, the group of us showed up right at 10 o’clock. Shortly after we were seated, the restaurant started to fill up. So clearly Ramsey’s breakfast draws a crowd, despite the later opening time.

FOOD: Ramsey’s is known particularly for the Traditional Ramsey’s Breakfast, which at $8.45 includes your choice of any or all of the following: 5 eggs (prepared any way except poached or as an omelet), bacon, sausage, hash browns, pancakes, and toast. This is an absolute steal if you’re starving and can’t make up your mind. If you’re hungry for just some eggs and toast… try something else.

My version of the Traditional Ramsey’s Breakfast included the pancakes, bacon, sausage, hash browns, toast, and two eggs over-easy. The pancakes, we saw, were prepared by one of the servers over a griddle on the bar. These bad boys came out first, accompanied by packets of butter and syrup. Simple and straightforward. The pancakes weren’t bad by any means – they were plate-sized and puffy – but they reminded me of something I could easily make at home using Bisquick. 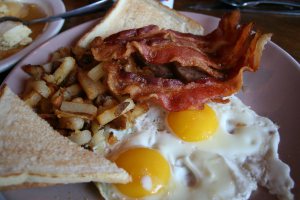 Here’s my plate. It is a good-looking breakfast, isn’t it? Meat-wise, the breakfast did well. The bacon was definitely good, and the sausage patties okay. Sausage can always be iffy, you know? Especially when in patty form. I’ve tasted some nobly-homemade varieties that are bland, while some store-bought versions I’ve sampled are over-processed and more than a bit frightening. These patties landed square in the middle of the sausage spectrum: probably not homemade, but still tasty. 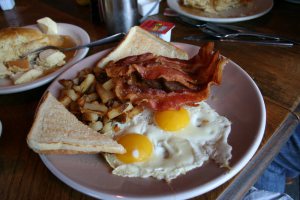 Here’s my breakfast in wide shot. The hash browns needed some seasoning, and all of us noticed that they looked suspiciously like cut-up fries, but it’s hard to argue with fried potatoes. The eggs were excellent – probably some best specimens of over-easy eggs I’ve tasted. Look at those! They’re nearly aesthetically perfect. (Beth tried her eggs scrambled, and they were great as well – a little bit slippery; just how I like ’em.) Finally, the toast was lightly buttered, a little floppy, and a good accompaniment to a whole symphony of breakfastness. Round this off with some coffee that classifies as good brown, and you’ve got a fair-priced, plenty filling, all-around decent breakfast.

SERVICE: Because we caught Ramsey’s right at opening, the employees were all ready and raring to go… perhaps a little too much. We noticed a total of seven employees plus a manager working the place – and Ramsey’s isn’t huge. This doesn’t count anyone who was in the back cooking everything but the bar-griddle pancakes. The employees all wore T-shirts and jeans, with tool belts strapped to their wastes and ties loosely tied over their shirts. Funny little get-up. Where it got a little uncomfortable was when the over-abundance of employees just stood in a corner and stared at the handful of customers while they ate. I know work might be boring at first, before the big breakfast crowd, but do you have to stand their awkwardly in the corner and stare like you’ve never seen a human eat before? (Hint: the answer is no.)

OVERALL: Ramsey’s certainly wasn’t the most exceptional breakfast I’ve ever had, but it’s definitely filling and the food isn’t all that bad. Again, if you’re really hungry for a big meal, the Traditional is sure-fire bet. You can get up to 5 eggs, in addition to all the meats and carbs. But if you only want 2 eggs and toast, you’d be wasting money to order it. Overall, though, I would go again – it’s a good breakfast with a few quirks that make the place interesting.