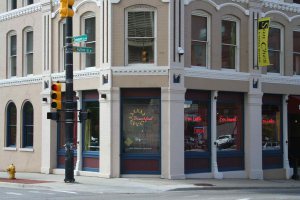 IMPRESSIONS: We’ve been visiting San Chez Bistro in downtown Grand Rapids for years now – it’s always been a favorite. They’re a tapas restaurant – meaning they feature small plate meals that are meant to be shared with a group. I can’t remember ever having a bad meal at San Chez, so the place has always had a dear place in our hearts. And now we’ve found even more reason to the love San Chez… breakfast at their cafe.

My wife, sister-in-law, and I made a stop here on a bright and beautiful Monday morning while visiting some family in Grand Rapids. We had intended to go home that day, but as the remnants of Hurricane Ike had rendered much of our home city of Columbus, Ohio powerless, we decided to extend our stay in GR. 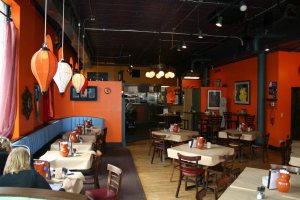 The Cafe is located in the same building as the Bistro, on the corner of Fulton and Commerce. The entrance is on Fulton, and is separate from the Bistro’s. When you enter the building, you’ll feel like you’re headed into a set of offices, but if you keep your eyes to the left you’ll see the entrance to the Cafe.

ATMOSPHERE: The Cafe features awesome decor, with a bright palette of yellow, purple, red, and orange. Most of walls include big windows with some good views of downtown. We visited late morning, just after the breakfast crowd and just before the business lunch crowd, so it was nice and quiet. 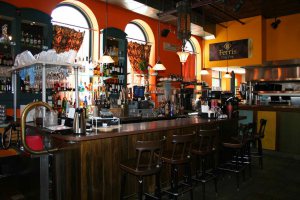 I counted ten booths, eleven tables, plus a counter with about five seats. So there are plenty of options. We opted for a booth by some of the big windows. Nice and bright! 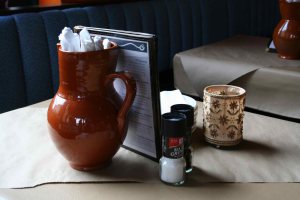 Each table has its own little setup of cutlery and napkins in a jar, a drinks menu, a candle, and salt and pepper grinders. Big fan of this: you freshly grind your own salt and pepper at the table. 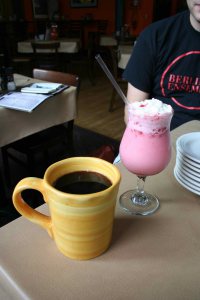 FOOD: Alright, let’s start with the drinks. I ordered a coffee, which was mellow and sweet. It came in a large mug – so large that I didn’t need a refill throughout the entire breakfast. Beth ordered a soda drink called a Tipasa, with vanilla and raspberry cream soda. It was fizzy, creamy, and tasty. The Cafe’s menu features a range of drinks, from coffee, tea, and juices, to smoothies and even alcoholic drinks (that part of the menu is called It’s Never Too Early). 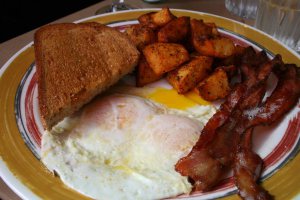 Their menu features a wide range of items – from breakfast basics like pastries, melts, and omelets to some more unique offerings. Because we visited around 10:30, the lunch sandwiches were available, too. I tried the Mezze Traditional Breakfast (pictured above). I loved it all: thick, crusty toast, large chunk potatoes that were well-spiced. Thick cut bacon. Two eggs over-easy done just right. It was a model breakfast. 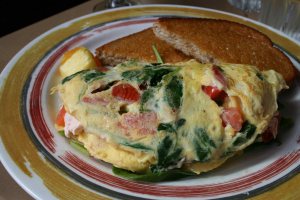 My sister-in-law Abbey ordered the Fresh Spinach & Tomato omelet. They made it with a special salsa cream cheese instead of the goat cheese listed on menu, because, as our server told us, the chef didn’t like the goat cheese they had. It’s nice to hear of a chef taken license with their own menu, particularly if they’re not satisfied with their ingredients. It was full of big chunks of tomatoes and fresh spinach, and Abbey declared it good. 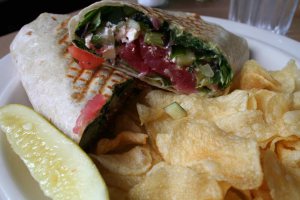 Beth tried the Tuna & Avocado wrap. It was full of veggies and nice pieces of raw tuna. The tuna was really nicely flavored – it was tasty while complementing the other flavors in the wrap. Oftentimes fish can be overwhelmed by the other elements. But not this one; it was divine.

SERVICE: The service was excellent – one of the biggest selling points of the place. Since the Cafe wasn’t very busy, our server clearly had more time to spend with us. But she was very patient with us as we were very slow to choose our meals (we were playing with our son Will). But she had a great sense of humor, made jokes with us, and was very willing to make recommendations. I always like it when servers are bold and confident enough to make suggestions and really answer questions about the menu. It shows that they know everything on the menu, and can understand people’s tastes enough to help them find something they like.

OVERALL: There’s a lot of good stuff going on at San Chez Cafe. I would gladly return there for breakfast or lunch. The decor is interesting and comfortable at the same time, every bit of food we tasted there was fantastic, and the service was top notch. Now, our experience might be slightly skewed by the fact that we went on a slow morning, but it’s not going to prevent me from returning. If you’ve been to the Bistro, you already know the high quality food that comes out of San Chez, so you know that your experience at the Cafe will be a good one, too!