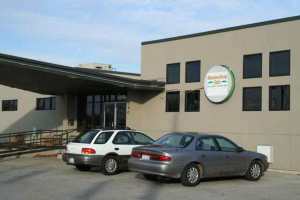 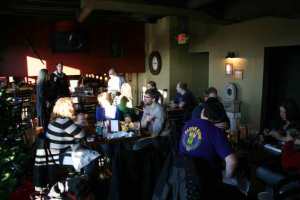 We gathered with a large group of people at the new Banana Bean location as part of the Wild Goose Creative 2008 New Year’s Festival. The folks at Banana Bean kindly opened up a couple hours early for us to hold a breakfast/food blogging event there. I spoke a little bit, as well as Jim Ellison from CMH Gourmand. It was nice to have full run of the restaurant – we got some good pictures of the overall event and the restaurant while we ate. (You can see some video of the breakfast and the festival events here.)

ATMOSPHERE: There’s something I really like about their original location, about the intimacy of that one small room with a handful of tables, and BB manages to mostly retain that sense in the new location. They split the restaurant into two parts: the lower has rows of booths and free-standing tables opposite a big, long bar. A fireplace stands at one end – this room has the darker, more intimate atmosphere of their original location. The upper room, where we dined, is up a short flight of stairs, and feels brighter and more open. 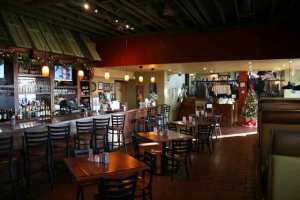 The outside of the building isn’t much to look at – a large tan front with a strange, triangular overhang jutting towards the street – and while the location is technically in the Brewery District, it feels a little outside of it, west of the Scioto River. Let’s hope that the neighborhood continues to improve around Banana Bean – it could certainly serve as a mainstay to the area.

FOOD: Banana Bean did a solid A+ on the food during this visit. We tried a few old favorites, as well as some new specialties, and enjoyed them all. 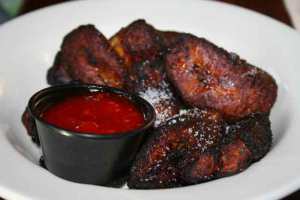 My wife ordered two smaller plates. First up was the fried plantains, which are up there with some of the best we’ve had. The sweet, mushy fruit is balanced with a salty crust and a spicy dipping sauce. 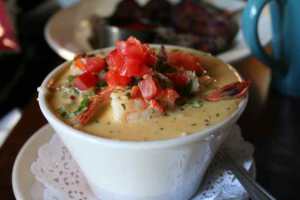 The real star of our meals was the Cedar Key Shrimp & Grits. The bowl packed a huge wallop of flavors. Great mixture between the tomatoes, the grits, the shrimp, and the sauce. I could easily go back for more and more of this. 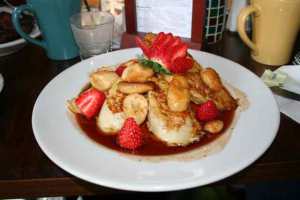 I just had to have the Bananas Foster French Toast again. It was every bit as fruity and custardy as I remembered it. There’s a nice glaze to the bread and the bananas, and the sauce has a little bit of a tang to it. I would like it to be a little thicker – closer to straightforward maple syrup – but the rich flavor makes up for the loose consistency.

SERVICE: Because we were a special group visiting that day, the folks at BB clearly busted their butts for us. Our meals came out quickly, they were attentive to our needs, and they provided a very warm welcome. Again, they were kind enough to open two hours early for us, so we were pretty much the center of their attention while we ate. It was great – I should do it more often!

OVERALL: Oh, sure, I’m going to be going back to Banana Bean. I knew that even before I wrote this review. I know some people have qualms with it, and their food isn’t perfect, but I’ve got more menu items to try, and they keep offering such a wide variety of items you can’t find elsewhere. This new location is more polished than the original, but the decor is still unique and fitting to the food.