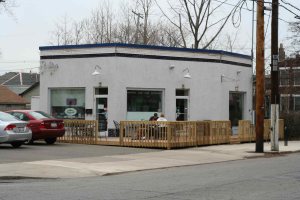 [The restaurant is under new ownership; for an updated review, please see Katalina’s Cafe Corner.]

IMPRESSIONS: I’m ashamed to say that I used to live just one block away from Cafe Corner, and only visited once for a cup of coffee. The coffee was excellent, but because of that ignorance I, along with many people, tend to have of the things immediately around you, I never returned. Have you ever had that? Where there’s some hidden gem – a restaurant, a coffee house, a boutique shop, whatever – sitting a stone’s throw from your house, and you never visit. And when you finally do, you smack your hand to your forehead and say, “How could I have missed this for so long?”

Such is my experience with Cafe Corner.

Sadly, I’ve now moved away. But that’s no excuse not to return.

ATMOSPHERE: Cafe Corner’s name really says it all: it’s a small cafe, on the semi-busy street corner of Third and Pennsylvania Avenues in Harrison West. The building itself takes up barely a quarter of the corner lot – the rest is given over to parking. Handy for the Cafe; parking is free most of the day. 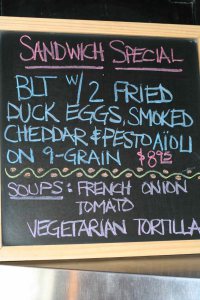 We visited during Columbus Restaurant Week, during which a select number of restaurants around town offered $15 and $30 specials on a fixed menu. It was a great chance to try some of Columbus’ best dining offerings. So I took this as my impetus to finally visit Cafe Corner; it was one of only two places doing breakfast specials during the week. 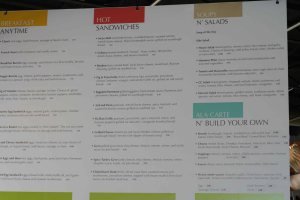 I didn’t get very good pictures of the inside, aside from the menu and the chalk board featuring the day’s special. The small space feels even smaller on the inside. I counted five or six tables; the rest of the space is given over to the bustling kitchen. They really need the patio out front, which adds about nine more tables, but clearly a majority of their business is takeaway.

FOOD: My wife and I did the Restaurant Week special, which was any two menu items plus dessert for $15. Naturally, I chose a breakfast option. 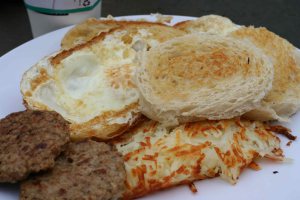 This type of breakfast is very near and dear to my heart. Cafe Corner calls it Hens in a Basket. Some friends call it Toad in a Hole. I know it as Eggs in a Nest, and it’s one of my favorite breakfasts to make (future blog post on this topic, I think). Whatever you call it, this specialty involves buttering up your choice of bread, cutting a hole in it, then frying it with an egg in the middle. It’s simply delicious (my favorite variation uses Panera’s tomato basil bread). Cafe Corner’s was no exception – they use a nice, thin bread, so the egg is cooked evenly. Very tasty sausage patties, and the hash browns were browned and hashed just the way I like them. I washed it all down with coffee from Stauf’s. My only complaint about the meal was the slight fake buttery taste to it all. I suspect this comes from the butter substitute that Cafe Corner uses on their grill. I think they should replace whatever it is with real butter, so that it tastes less like, well, butter, and let’s the full flavors of the eggs, sausage, and potatoes shine through. 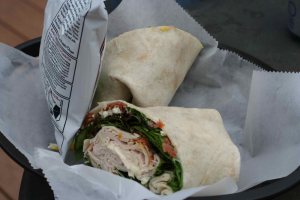 My wife and sister-in-law tried some of Cafe Corner’s wide selection of sandwiches. These seem to be the Cafe’s specialty, which makes sense considering their takeout business. Abbey had the Turkey Bacon Bleu wrap and declared it very good. 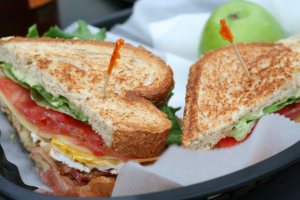 My wife had the special: a BLT with fried duck eggs (where else can you get those?), smoked cheddar, and pesto aioli. It was really something else. I don’t think I’ve had duck eggs before. Tasty. Very rich and hearty sandwich.

SERVICE: Service was awesome. We were served by the woman who turned out to be the shop manager. I didn’t catch her name, but she was super friendly and willing to accommodate. She even gave Abbey the Restaurant Week special for half price.

OVERALL: I’m sad that I don’t live as close to Cafe Corner as I once did. It’s easy to pass this place by, because it’s a tiny building with a nice patio that looks mostly like a coffee shop, in a mostly residential neighborhood. But, like most great finds, the Cafe is small, unassuming, and worth taking the time to discover. I probably won’t return for their breakfast, but the sandwiches are worth the visit alone.