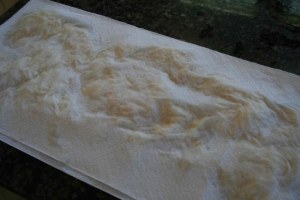 In my last post I documented my first try at making hash browns. Sounds simple, I know, but I had to try it. This is Round #2, using some suggestions from folks on Twitter. First off, I peeled the potatoes and then shredded them with our food processor. Much faster. Then I laid them between paper towels to dry them some. 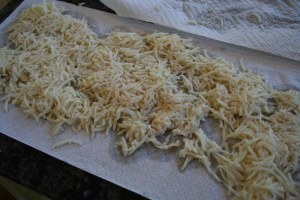 I only used two pieces of paper towel, but I can tell that I could have used many more. I’m still surprised that potatoes are so watery! 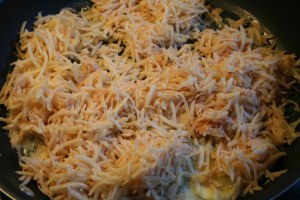 Into the frying pan. With about 3/4 stick of butter. This is about 10 small potatoes worth. 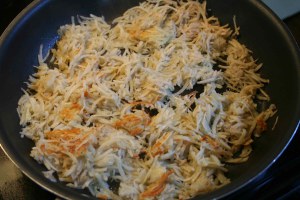 They’re starting to brown! I used a larger pan to try and spread them out more. 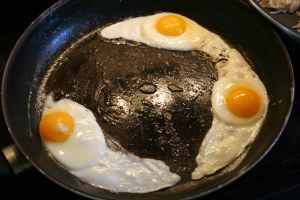 I fried up some eggs, too. This frying pan is a little too rounded, so the egg whites run too far to the sides. They look like the alien ships from the first War of the Worlds movie. 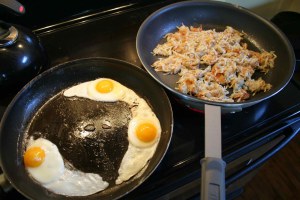 The whole gang cooking together. 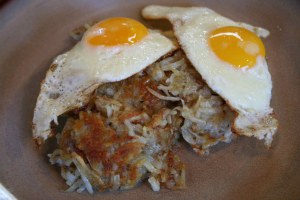 And the end result. Another dash of kosher salt and pepper on the eggs. Left the yokes a little runny so they dripped down into the potatoes. Taste was great… I mean, how can potatoes, butter, salt, and pepper be bad? Still, I think I’ll try them again sometime soon. Maybe dry out the potatoes more. And I’m curious what would happen if I didn’t peel the potatoes. Any thoughts?