Return of the Hash Browns 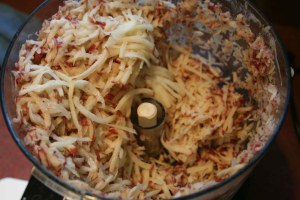 Third time’s the charm! Using the last of the potatoes, I took some more readers’ suggestions and made hash browns again. This time I didn’t peel the potatoes – trying to preserve more of the nutritional value of the spuds. Much easier that way, and it didn’t seem to affect the final outcome. 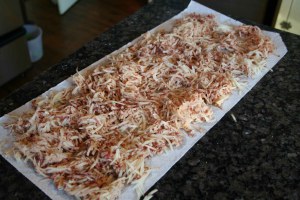 I made a lot of potatoes this time. A lot. More than one person should eat in one sitting. Laid them out on paper towels again, and took the suggestion of salting them to draw out more of the moisture. 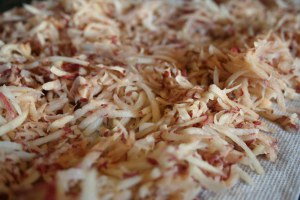 I think my main problem is that I’m impatient. I know I should keep soaking and re-soaking the potatoes, but I get hungry and throw them in the pan early. 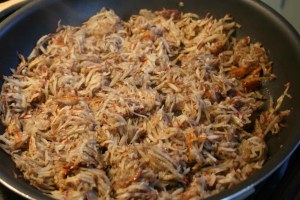 It makes sense, though, when I think back to almost any visit to a breakfast diner. They typically have a lot of potatoes – hashed or chunked – just sitting on the grill. They leave the potatoes there to keep browning, then scoop them up as needed. 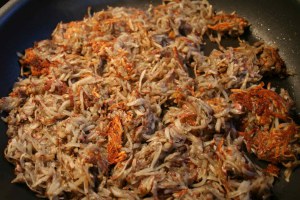 That being said, we got our best browning yet. I was little more patient and let them sit in the pan longer. That’s the key, I think, especially if your potatoes are still wet. The color of the potatoes still seems a little off – a little too dark. Any ideas? Is it because of the moisture? Does the butter burn (although I don’t think it did)? But they tasted fine, especially with another fried egg on top. Although I forget to get a picture of the final product. Next time!