Breakfast at the Pumpkin Show? 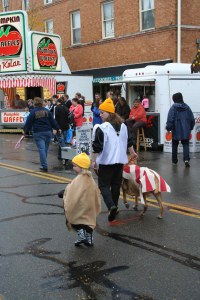 This picture isn’t the greatest, but I just had to share a moment from the parade in the Circleville Pumpkin Show. We ventured down there despite the rain, and were rewarded with a light mist and no crowds. During the parade I caught this little gem: a mother, daughter, and their dog dressed as eggs, bacon, and pancakes. Bizarre, yes, but breakfast in a parade never hurt anyone.