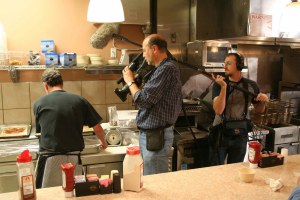 This morning I was fortunate to join a crew from WQED, the PBS affiliate in Pittsburgh, as they visited Columbus while filming for Breakfast Special, a show about breakfast in America due out next June. Producer Rick Sebak contacted me and asked for suggestions in Columbus. 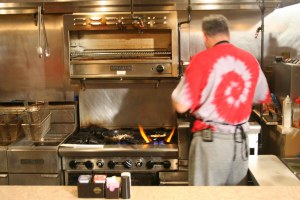 Stop Number #1 took place this morning at Best Breakfast and Sandwiches. Beth and I visited for the first time last week (review here), and it became an instant favorite. When Rick asked for suggestions, I wanted to highlight two types of Columbus breakfast joints: the traditional and the innovative. I think these two things define the Columbus breakfast experience, and Best Breakfast is a great example of the traditional. Pictured above is owner Tom in the kitchen. 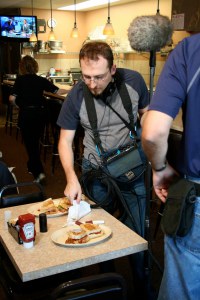 They served breakfast to all of us. Here’s Glen the sound guy with his sandwich. 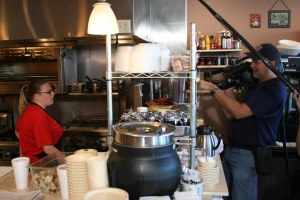 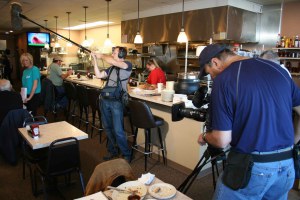 Filming Kelly while she interacts with customers. 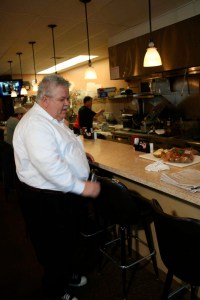 This is Rick Sebak, producer of the show. He’s created a number of documentaries about some of the most fascinating aspects of American culture: flea markets, hot dogs, cemeteries, amusement parks, the Lincoln Highway, and many more. 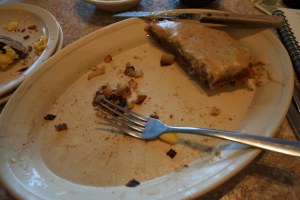 During this visit I ordered the Country Fried Steak. The gravy on it was similar to that of the Sausage Gravy and Biscuits, although without the chunks of sausage, obviously. It was delicious and peppery, and as Tom observed, the fried steak itself had “actual meat” in it, it wasn’t just a pile of bread chunks. The potatoes, toast, and eggs were excellent as usual. For some reason, I like getting the scrambled eggs here, even though I normally go with over-easy. Some sort of highly-tuned breakfast intuition, I guess, led me to order these scrambled eggs.

What amazed me most this time around, as I sat for a couple hours near the door while we filmed, is how EVERY customer was greeted by name at the door. All sorts of people came steadily pouring in, and all the folks at Best Breakfast knew their names, their jobs, their stories, all sorts of stuff. Suzanne or Jan kept pointing out customers and suggesting I talk to them about various aspects of the restaurant business or about breakfast in general. It was incredible to witness something like that, and how they knew so many names. They even pointed out a few customers who visited Best Breakfast twice a day. Suzanne pointed out one pair of gentleman and said, “If we served dinner, they’d be here for that, too.”

A big thanks to Tom and Jan, the owners, as well as Kelly, Suzanne, and the rest of the crew at Best Breakfast! I hope to be visiting again soon!