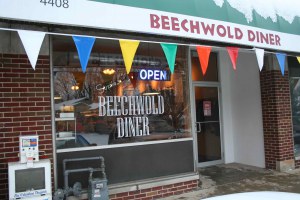 IMPRESSIONS: With the New Year comes new breakfast adventures! Beechwold Diner just opened on January 2 in the spot once occupied by Rube’s Diner on Indianola. After fifteen-ish years in business, Rube’s closed it’s doors in 2005. Up until this past spring, the location almost became Ginna’s Eatery (read an article on it’s “opening” here), but the attempt stalled. I never visited Rube’s, but I hear it was about as greasy hole-in-the-wall as you could get. 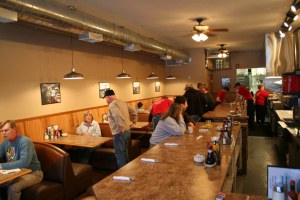 Well, now Beechwold Diner has taken it’s place and seems to be doing quite well for itself. I visited recently with CMH Gourmand (read his post here) so we could take stock of the place. We asked one of the owners how business was going. He said when they opened on January 2, he panicked, because no one came in the first hour of business. But then, for the next four-and-a-half hours, they were standing room only. Awesome. 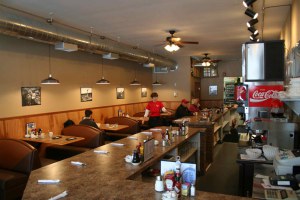 ATMOSPHERE: We hit Beechwold Diner up around 8 a.m. on a Saturday, and by the time we left it was full. Typical, the owner said, of a Saturday morning. So clearly word is getting out, despite very little advertising, and the citizens of Clintonville/Beechwold seem desperate for a diner. 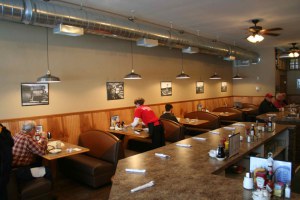 Beechwold Diner is a strange combination of old-style diner with fresh construction. Someone put some serious work into the place. New stainless steel everything in the kitchen, new seating, new lighting, new booths and counter, the floor looks new, too. So if Rube’s dirtiness kept anyone way, there’s no excuse now. The layout is open and bright. Big counters with about 13 stools, plus 8 tables. Fairly boring colors of browns, grays, and mauves. Comfy and easy to like. In a nod to the area’s history, a series of black-and-white photos hang on the wall, showcasing past and present Clintonville/Beechwold landmarks like Weiland’s Market, Olympic Pool, an old streetcar, and the amusement park that once existed at High Street and Kelso.

FOOD: My pics are from a combined set of visits – I really don’t order this much food in one sitting. But this allowed me to sample a wider range of things. 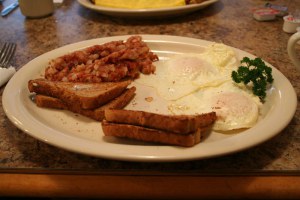 BD’s menu features all the breakfast standards – nothing exceptional, but enough variety for anyone. The menu is organized by variations on Two Eggs, Classics (including pancakes and sausage gravy & biscuits), Omelets, Sides, and Drinks. This is my brother-in-law’s 2 eggs, toast, and corned beef hash. Over-easy eggs done right. Buttery toast. And an excellent corned beef hash. 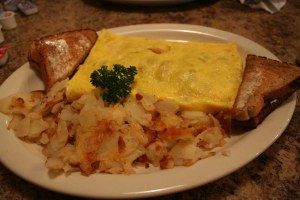 On my first visit I order the garbage omelet. Never actually had one of these, and our server recommended the omelets. Came with potatoes and toast. The potatoes were good – sliced thin and crispy enough. Definitely needed more seasoning, at least some salt. The toast was buttery and soggy (read: delicious). 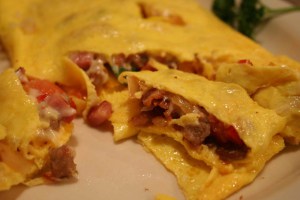 The omelet itself had some highs and lows. Some of the ingredients weren’t spread out too well, so one end had no cheese while the other end was loaded with it. One of the cheeses looked and tasted like Velveeta – maybe it was American cheese? – and it turned me off. My advice to the Beechwold Diner folks: be a little bolder in your seasoning. We can take it. And it will make your already good food more memorable. You want people to take a bite and then start looking forward to their next visit. 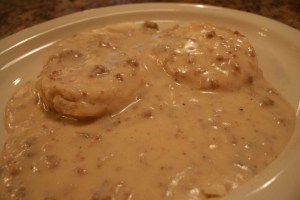 On the more recent visit, I picked a half order of the sausage gravy and biscuits. Similar experience to the garbage omelet – lots to like: good biscuits, very chunky gravy – but they could punch it up a notch with more seasoning. 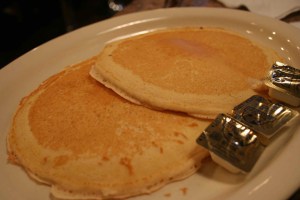 Half stack of pancakes, too. Nice and fluffy – I never how to get them this way at home. Very good. 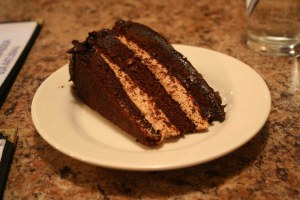 SERVICE: A very friendly group here, who seem at home with their customers. The diner is actually named Suzzie’s Beechwold Diner, but we didn’t get to meet her. Still, BD has a very comfortable atmosphere already. The servers seem to know everyone’s names already, so in this department the diner seems right on track.

OVERALL: Jim and I talked a little bit about the nature of diner fare. When you really compare diners side-by-side, there’s not much variety. Anywhere you go you’ll find the old standards, in a pretty warm and inviting atmosphere, and in a place that naturally pushes everyone to be neighbors. And that’s really what defines diners. Not the food. But the neighborhood identity, the regulars who gather to see each other and the wait staff, and the pride everyone takes in a local establishment. Beechwold Diner seems to be filling a niche for the Clintonville/Beechwold area. Sure, Wildflower Cafe is down the road, but I honestly find the place unimpressive. Nancy’s is hopefully-soon-to-be-re-opening over on High Street, but when you really think of it, Beechwold Diner feels miles away up on the northern stretch of Indianola. Clearly the neighborhood desires this establishment, because the regulars filling the tables and counters here seem to have picked up right where they left off when Rube’s closed. I’m happy to see this, and look forward to being one of those regulars, too.