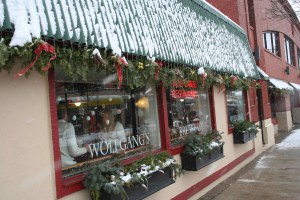 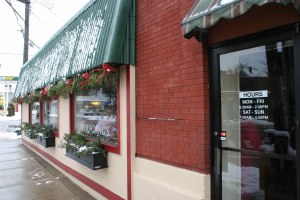 IMPRESSIONS: Wolfgang’s is a staple amongst the proud tradition of breakfast in Grand Rapids. As evidenced by the 20 minute wait we experienced on a Monday, Grand Rapids is a serious breakfasting city (that might explain my origins). Wolfgang’s sits in the center of Eastown, the hipster part of Grand Rapids. Close to Wolfgang’s is another Grand Rapids favorite: Yesterdog. Both places are great examples of the history of the neighborhood and the longevity of some of the eateries there. 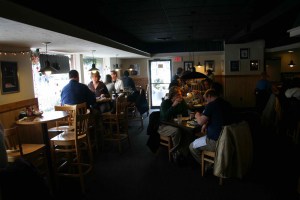 ATMOSPHERE: It’s been years since I’ve been to Wolfgang’s, but I don’t remember it being this busy. We visited on a Monday – granted, the Monday after Christmas – and found ourselves in the crowded waiting area for about twenty minutes, which isn’t unreasonable. Any native Grand Rapidian will know that you sometimes have to wait for your breakfast. Ask anyone who’s been to Real Food Cafe or the now-gone Boston House on a weekend. Like I said, Grand Rapids is a breakfast town. 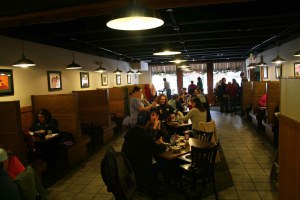 Wolfgang’s is made up of two sections. The first, pictured directly above, is a large dining area with plenty of tables and booths. Fairly bright, and packed the morning we went. The other section (pictured further up) is closer to the kitchen and feels more bar-like: lower ceiling, a small counter with stools looking partially into the kitchen, plus a dozen or so cafe tables and chairs. A little darker, and still packed. I believe this is the smoking section (something I’ve thankfully been able to forget about since Columbus passed its smoking ban a few years ago). 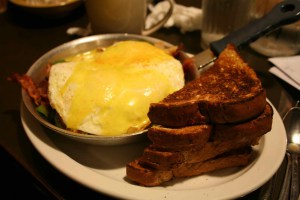 FOOD: Wolfgang’s has a HUGE menu, which is my big hang-up about the place (more on that below). Here’s a sampling of our food. Pictured above is my order: the Cooper, a skillet with all the goods: potatoes, onions, peppers, bacon, turkey, and cheddar, with three over-easy eggs on top and a dash of hollandaise. Comes with a side of toast. I’m a little leery of skillets, but this one was decent. Not too greasy, a good amount a seasoning, although they could used a little more seasoning in the hollandaise, and actually put more hollandaise on it. 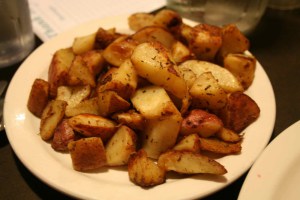 A side of good chunky potatoes, with appropriate seasoning. 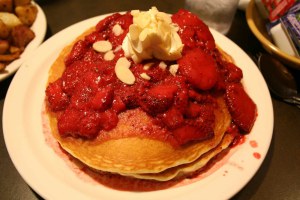 My brother ordered the Mahoney Cakes (what does the name mean?): pancakes with cream cheese, strawberries, and slivered almonds. Hard to go wrong with that. 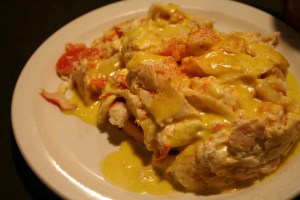 My sister-in-law tried the Baker, Jr: egg whites, crab meat, cream cheese, and tomatoes, on English muffins with hollandaise. I didn’t try it, but it looked like a big tasty mess. The big disappointment was that they used fake crab in it. I understand that adding real crab would up the price (Michigan’s not terribly close to saltwater), and that fake crab doesn’t taste that bad. But krab-with-a-k… always a letdown. 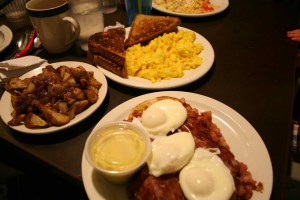 My wife ordered the corned beef hash. Overall good, although the three “poached” eggs were overdone and not technically poached eggs. Real poached eggs should be completely submerged in water – these were maybe floated in boiling water in some sort of container, and again way overdone.

Wolfgang’s serves up a lot of more-than-decent food, and clearly has a strong following amongst the Grand Rapids breakfasting crowd. You can’t deny that. My big problem with Wolfgang’s is that their menu is too expansive and very poorly laid out. Seriously – it’s a graphic designer’s nightmare. Certainly there’s something for everyone, but that’s good only to the extent that a newcomer can understand your menu. It’s typical for restaurants to have a page of favorites or specialties or signature dishes – something that stands out from the standard items – but Wolfgang’s has THREE pages of it. First, there’s the Hall of Fame Favorites, with dishes named after owner Matt Wolfgang’s friends. Then the Smash Hits, with another dozen odd dishes, all with special names that tell you nothing about the dish. THEN we get a page titled Breakfast, featuring things like benedicts, steak & eggs, etc. plus a la carte items. And we round it out a page of omelets, pancakes, waffles, french toast, and so on. Four pages of breakfast is not a bad thing, but all of the descriptions are in upper case and/or bolded or italicized. Just look at this page or this page of the menu. Take one glance and see if you can easily understand the selections.

Another note about the menu… as we waited in line before being seated, I moseyed over to the counter and asked a server to fill my son’s cup with water. They graciously obliged, and while I waited I watched the opening into the kitchen, where the cooks set out the finished dishes for servers to pick up. The countertop in the window was completely packed the plates ready to go. I mean packed – it was a busy morning. And two servers stood over them, obviously confused and discussing which plates were which. I could hear them saying, “I need a Westsider.” “That’s a Westsider.” “No, that’s a Westsider without bacon.” And then one of the cooks jumped in trying to decipher the dishes. When the waitstaff and and kitchen staff are confused over what’s what, that means your menu is too expansive.

SERVICE: No complaints here – our server was super friendly and able to handle all the varieties of our orders. How they keep that menu straight is beyond me. 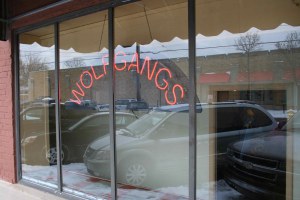 OVERALL: Wolfgang’s should be near the top of the list in breakfast offerings in Grand Rapids – I honestly enjoyed my experience there and would return – but they need to reign in their menu a bit. Perhaps doing this would allow them to improve some of the menu items, like make better poached eggs and avoid Krab meat. And it might reduce a newcomer’s confusion over what’s what.