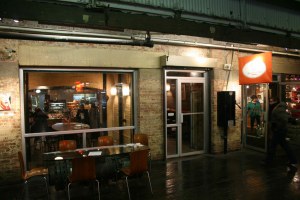 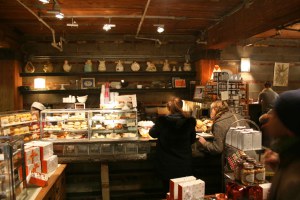 IMPRESSIONS: A few trusted sources recommended Sarabeth’s as a must-stop for the New York City breakfast/brunch tour. Sarabeth’s seems to have a loyal following at all of its locations, including ones West, East, and at Central Park South. Recently they established a relationship with Lord and Taylor, so now Sarabeth’s locations are popping up in L&T stores around New York City. I selected this location – listed as Sarabeth’s Bakery – without knowing it was in the Chelsea Market. This turned out to be fortuitous: not necessarily good news for our visit to Sarabeth’s, but the market was a very pleasant discovery. 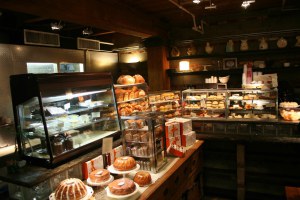 Sarabeth’s Bakery is located roughly in the middle of Chelsea Market, so to get to it you pass through a veritable hall of temptation: bakeries, wine shops, boutiques, chocolatiers, butchers, you name it. Very dangerous if you arrive hungry. 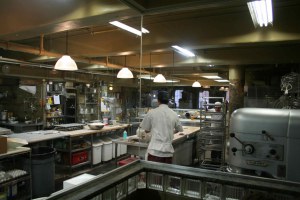 This location is specifically called Sarabeth’s Bakery. Next to the tiny restaurant portion is a large space where, I’m assuming, all the baked goodies for Sarabeth’s restaurants are made. Big plate glass windows let you view the action; there’s even a couple tables right by the windows.

ATMOSPHERE: Once you find the bakery itself, you’re in a relatively quiet little enclave, with low ceilings, shelves loaded with goodies, and pretty cramped seating. There are a couple cafe tables “out front,” plus a few inside, and one big long table that we shared with another couple (who were getting a little too close with each other). 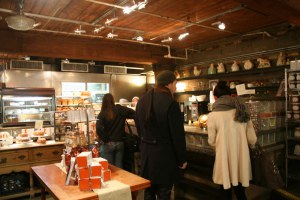 The shop itself was relatively quiet. In fact, the whole market was, considering it was a Saturday morning. Much of the shop consists of shelves featuring the various Sarabeth’s goods.

FOOD: In addition to all the baked goodies, jams, and other assortments, you can order a made-to-order breakfast here, although in some ways this menu seems like an afterthought to the location. 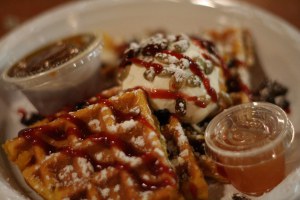 I ordered the Pumpkin Waffles. The name alone drew me in. These were four very good waffle slices, with a dollop of soft cream cheese, pistachios, raisins, a raspberry-strawberry sauce, maple syrup (real!), and a side of their homemade jam. Overall, very sweet and delicious, but served on a flimsy plastic plate that went completely against the complexity of the dish. 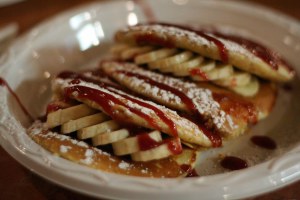 My wife went for the Oatmeal Pancakes. These were dressed up just as much as the waffles: bananas, powdered sugar, and the raspberry-strawberry spread. Again, very delicious and fun dish, but partly overshadowed by the crappy silverware and plates. 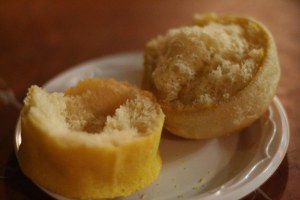 An English Muffin. Very good – the biggest and fluffiest I’ve ever seen. Although it was served with rock-hard cold butter – way too difficult to spread. That’s a pet peeve of mine: serving butter in a nearly unspreadable state.

SERVICE: Service here could use some serious improvement. I don’t like it when you order something directly off the menu, and the people behind the counter act like it’s an imposition, like the menu was just a nice suggestion. When my wife ordered the pancakes, she tried ordering a side of fried eggs (you need to try the eggs to judge a breakfast place!), and the server kept telling her that ordering the eggs and the English muffin was the same as ordering one of their sandwiches, which my wife didn’t want. It took several attempts at explaining it – the servers clearly weren’t listening – before my wife gave up and told them to forget it. The actual service of the food involved them calling out the dish – not your name, even though they took it – from the counter and handing it to you over the register. There’s very little counter space dedicated to the point of sale. This makes for awkward transactions, when they’re trying to hand you food in the same space that other customers are ordering and paying. Not the best use of their space.

OVERALL: Given the creativity of the dishes, Sarabeth’s clearly has a lot going for it, and judging by their expanding locations, they have a big following. The food is tasty and fun – these were some great waffles and pancakes – but the gruff service and plastic tableware left a lot to be desired. Perhaps it’s worth checking out another location!