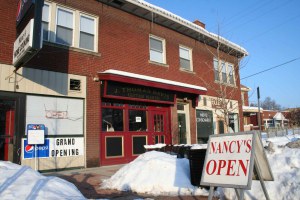 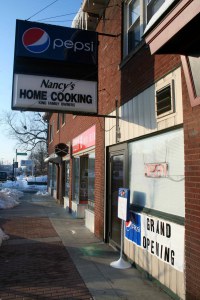 We pulled up at Nancy’s around 7 am that day, before the sun came up, and the neon “open” sign glowed warmly across the street. 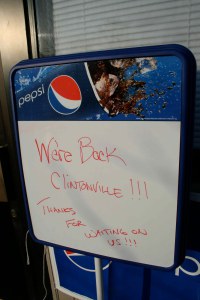 Just seeing the welcome sign and all the “open” signs gave me a warm feeling. 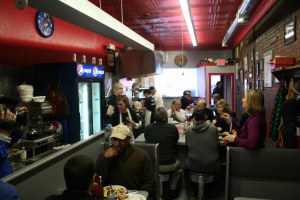 Inside, a crowd of regulars picked up right where they left off. Cindy King, the former owner, was on hand, as well as members of her family, and her niece Sheila Hahn, who took over the operations and led the efforts to remodel and re-open the Clintonville landmark. 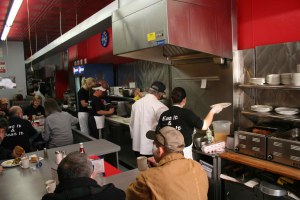 The interior looks pretty much the same. The folks from Lowe’s donated a new floor. The counters and booths look new, but they’re arranged the same way. The kitchen is in the same layout, but now sports a new range hood. Some of the original signs are still hanging, although the menu has been taken off the wall and is now on individual cards on the tables. And everything’s got a fresh coat of paint. If cleanliness every kept you away from Nancy’s before, there’s no excuse now! 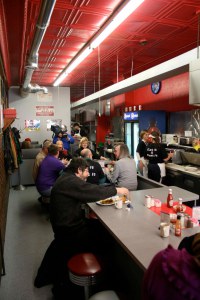 At the risk of sounding over-sentimental, especially for a place I haven’t visited nearly as often as many people, I found still this to be a really special occasion. You could see it in the faces of Cindy and Sheila and the small army of employees, all wearing black T-shirts with Nancy’s famous line “Eat it and beat it” on the back. (Cindy’s shirt said “Founder.”) You could see it in the faces of all the regulars who were eating their favorite breakfasts for the first time since June 2009. Every few minutes the door would open, and someone new would enter, to be greeted like Norm on Cheers. I can’t imagine what it must have felt like, if you were someone who ate at Nancy’s regularly for years, to actually be stepping through those doors again and see the familiar faces and smell those familiar smells. How often do you hear these days about small businesses that actually return after closing? I think it’s a testament to the power of the local and of the way food brings people together. It’s amazing how the community reacted to the closing, forming Facebook groups, holding fundraisers at local restaurants, and making donations from around the world. All to save this tiny hole-in-the-wall restaurant that holds such memories for each of them. 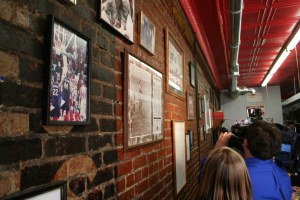 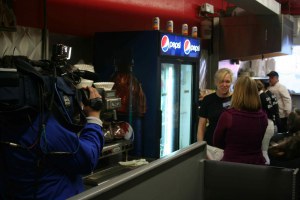 The opening has drawn a fair amount of press. Columbus Underground had an excellent interview with Sheila, and the Dispatch ran an article as well. A crew from Fox 28 did some live segments while we were there, too. 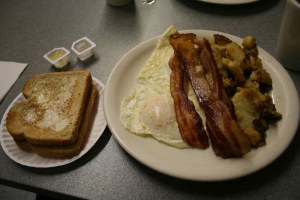 I ordered the same meal I had when I visited last May: 2 eggs, bacon, potatoes, and toast. It looked much the same as it did back in May. 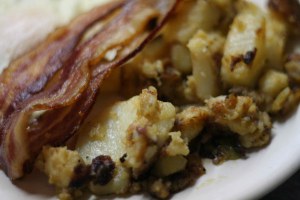 And tasted just as delicious! Now I’ll actually have to get around to trying their famous garbage omelets and chicken and noodles.