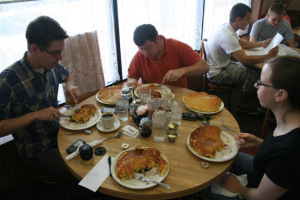 Last Saturday, a bold three of us attempted the Gena’s Restaurant pancake challenge: eat three of their whopping pancakes in one sitting, and you’ll get your picture on the wall. Over the years many have attempted it; only 14 have succeeded. Some strategies we discussed:
– don’t use too much syrup (the advice given by the servers)
– listen to relaxing music ahead of time
– drink water
– drink coffee
– put something in the pancakes (blueberries, chocolate chips, etc)
– use whipped cream instead of syrup
– vary the texture of the pancakes (this is what really did us in: the constant texture of the pancakes. Your body just gets sick of it.)
– order something salty to go with it: bacon, eggs, etc
– order the pancakes to go (they appear smaller that way), but then stay to eat them 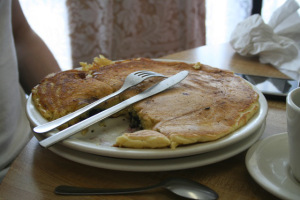 The four of us made a valiant effort, but alas, none of us succeeded. The servers from Gena’s brought the pancakes out one at a time. We delightfully sank our teeth into the first pancake, everyone eating at a moderate pace. Contrast that with the second pancake, in which we all slowed down or ground to a halt. We even took the suggestion of the servers and all ordered blueberry pancakes. They said we can add anything to the pancakes, and a little bit of tart fruit seemed to make sense. 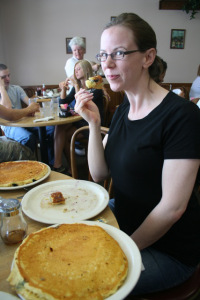 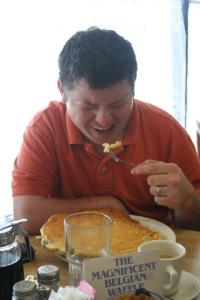 Chip taking one for the team. 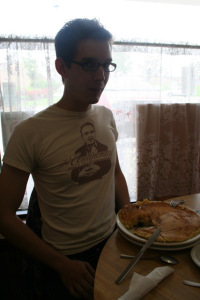 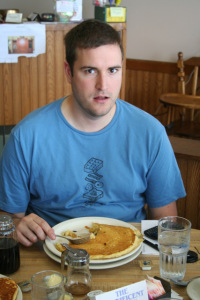 I am overcome by pancakery. 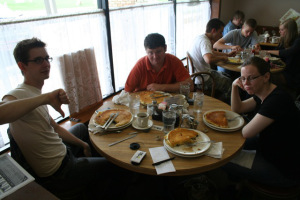 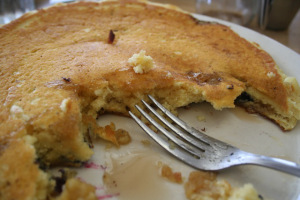 Just looking at this makes me feel ill. 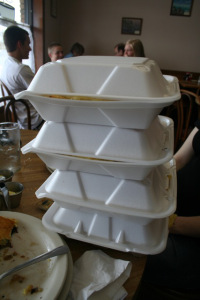 All of our third pancakes to go. 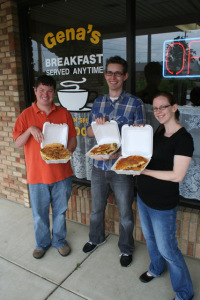 Jeremy certainly led the pack with his “in it to win it” attitude, but I think Megan gets the victory here. She calmly ate half the challenge, then stopped while she was ahead. She probably could have kept going, but she wisely quit.