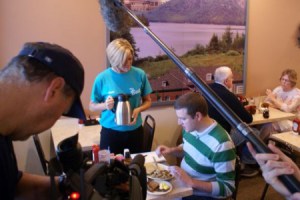 I’m gonna be on PBS! Tune in to see yours truly make an appearance in the upcoming PBS documentary Breakfast Special. Producer Rick Sebak – famous for his documentaries on hot dogs, amusement parks, diners, sandwiches, and more – contacted me last November about a visit to Columbus. He and his crew visited for a weekend the following month, while I lead them to first Best Breakfast and Sandwiches in Westerville (one of my favorites) and then Skillet in German Village (another favorite).

Rick and his crew have been busy traveling the country since then, from Georgia to Maine to Oregon to Hawaii. He just announced that they have SO much good footage that the documentary is splitting into TWO parts. This allows him to spend more time in each place. Myself and the Columbus stops made the cut into Part 1, airing in two weeks.

So join me in supporting Rick, his crew, and PBS by tuning in July 14!