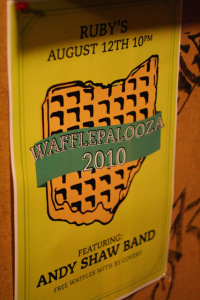 Recently, one of my favorite Columbus bands, the Andy Shaw Band, played a second annual concert/breakfast fest called Wafflepalooza. I missed it last year, but was invited to come by for the 2010 edition. 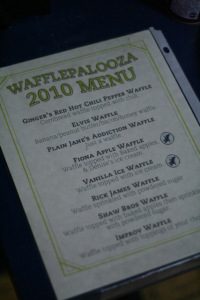 What is Wafflepalooza, you ask? Essentially, a concert from ASB, plus some kick-ass waffles. They had a whole menu of waffles, all musically-themed, for you to choose from. And they were all very delicious. 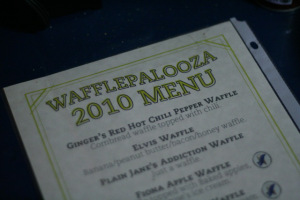 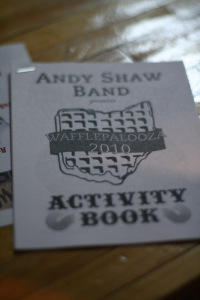 In case the waffles or the concert weren’t enough to entertain you, they created an activity book, too. Gotta love this. 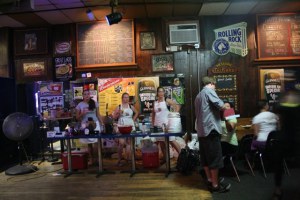 Melissa Fraley, head of the ASB Columbus Street Team, and the crew are set up to go with the waffles. 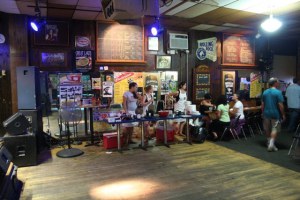 At last year’s concert, they let concert-goers serve themselves, which resulted in a waffle iron being set on fire. This year the Street Team headed things up. 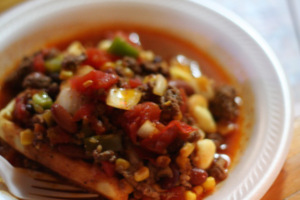 I got to try Ginger’s Red Hot Chili Pepper Waffle first. It takes the brilliant idea of a cornbread waffle and tops it with homemade chili. One of the hits of the evening. One concert-goer named Robert White who enjoyed this waffle in particular wanted to be quoted on the following: “It’s the best damn thing I ever ate,” and “I’ve just been baptized in corn bread and chili waffle.” There you have it. 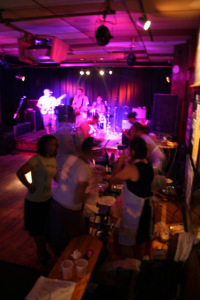 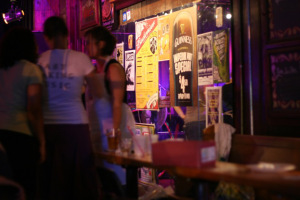 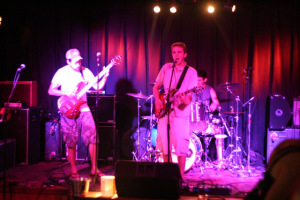 The opener was Speak Easy Three out of Buffalo. 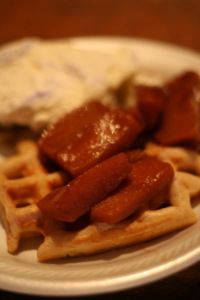 I then opted for the Fiona Apple Waffle. Delicious baked apple ladled on top, with a big melting scoop of Denise’s vanilla on top. A sweet antidote to the spicy chili waffle. 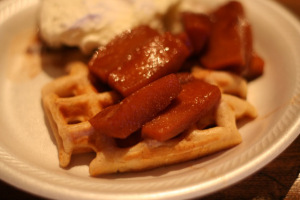 Seemed like a big success from one of my favorite local bands. I’ll try to be more on the ball and plug this sooner next year!