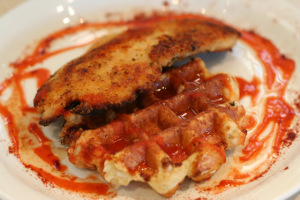 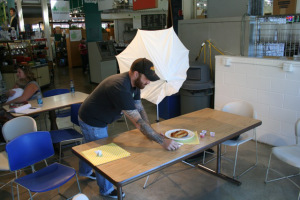 Consider this post a little “behind the scenes” about the latest (614) Magazine article, all about three spots where you can pick up chicken and waffles around Columbus. Part of the fun and mission of these articles is to find out more about these restaurants and get to know the enthusiastic owners behind them, and this is a way to share a little more! 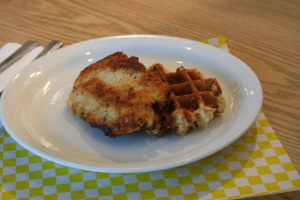 We met up with our trusty (614) photographer Chris Casella, and were joined by Jean-Francois Flechet of Taste of Belgium and Dan Bandman from Kitchen Little. 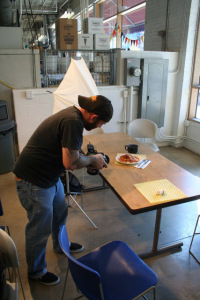 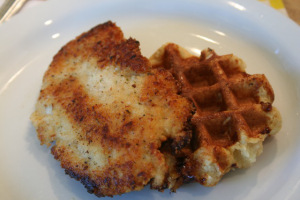 [Emperor Palpatine voice]: You want this… 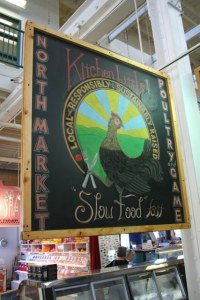 Kitchen Little has been serving delicious slow food for some time, although the name itself is new. I reviewed them as North Market Poultry & Game three years ago, early on in the life of this blog. 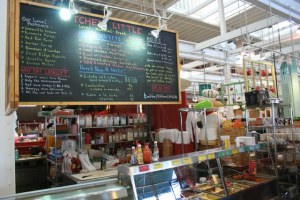 Dan from KL gave me the low-down on their side of the chicken and waffles meet-up. They get their chicken every other day from an Amish co-op in Kidron, Ohio. Their cutlets are prepared daily, pounded thin and soaked overnight in a buttermilk and hot sauce mixture. It’s breaded in panko and given a quick pan sear. The result is a tender piece of chicken with an amazingly tasty crust. 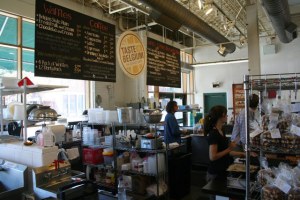 Contributing the waffles is, of course, Taste of Belgium. ToB has been in the North Market since June of 2009, and their arrival prompted everyone in Columbus to reevaluate how they thought about waffles. Jean-Francois and his team crank out waffles based on a family recipe from the Liege region of Belgium. The batter’s packed with beet sugar, leaving the waffles crispy and caramelized, and a perfect match for Kitchen Little’s chicken. Combine the two and top with Frank’s hot sauce and maple syrup, and you’ve got a sweet and savory combination that’s worth tracking down the next time you’re in Franklin County. 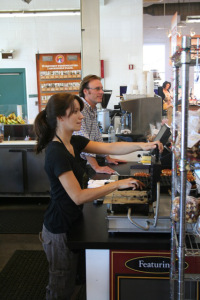 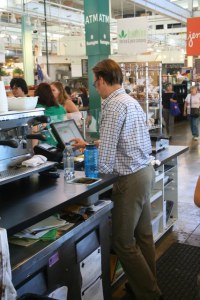 Taste of Belgium moved recently from their original location on the south side of market, to right across from Kitchen Little. The new location has been much busier, and has thankfully led to collaborations like the chicken and waffles. 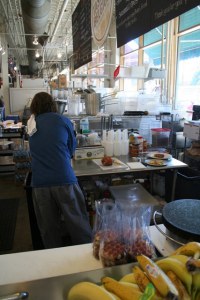 We also had the opportunity to chat with R. J. White, the general manager of the North Market Taste of Belgium (they have another location in Cincinnati’s Findlay Market, too). 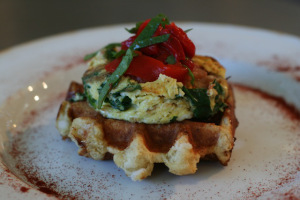 A. J. plugged their Fiesta Friday specials, and whipped up a sample version of their Waffles Rancheros. The Rancheros start with the standard waffle, topped with eggs, a black bean and corn salsa, peppers and onions, chorizo, and cilantro. 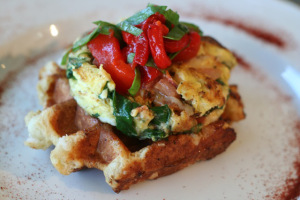 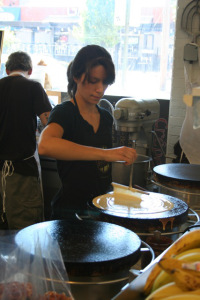 If all of that hasn’t tempted you, don’t forget that Taste of Belgium still does crepes well, too!

If you want these chicken and waffles:
Taste of Belgium (@TasteofBelgium) & Kitchen Little (@KitchenLittleOH)
in the North Market
59 Spruce St.
Served every day, Tuesday through Saturday.