An Anniversary & An Announcement

It’s the day after Thanksgiving, Black Friday, 2010. Time for a brief look back…

In June of 2007, I had just finished my Ph.D. and was looking forward to a new life and career without such a big project constantly hanging over my head. My wife and I had been blogging about our own lives for a couple years – the standard things like our dog, our house, our families – and I mentioned to her that I had thought of starting a new one about breakfast. I’ve always liked it, and with my kinda poor memory, I wanted to record the great meals we’d had. Also, writing about theatre history had really activated my instinct to document sometimes fleeting experiences. She encouraged me to do it.

It started with a simple blog post stating my ideas, and I continued from there. My first two reviews were bland and nearly photo-free. The very first, done while on a post-commencement vacation, was the Gingerbread House Bakery in Frisco, NC: an okay breakfast at a place better known for their pizza and donuts. No pictures. My second post, the first in Columbus, was… wait for it… a Bob Evans. One picture, of the outside, because I was too embarrassed to haul out my camera in front of our breakfasting group. 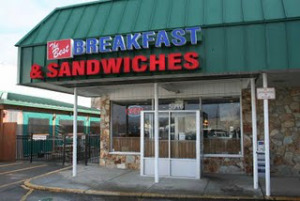 But the blog has thankfully grown from there. I haven’t really marked any of the anniversaries over the 3.5 years, but I feel the need to mark a particular one today. It was a year ago today – Black Friday 2009 – that my wife, son, and I had breakfast for the first time at The Best Breakfast & Sandwiches in Westerville. We were on our way to cut down our Christmas tree the day after Thanksgiving, and wanted to try breakfast somewhere new. Some quick web searches turned up The Best. Arriving there, we stepped into one of the most pleasant and welcoming breakfast experiences we had had in a long time. The food was homemade and comforting, although not out of the ordinary. But the total experience was. Everyone was friendly, engaging, interested in what I was doing, and proud of their own work. 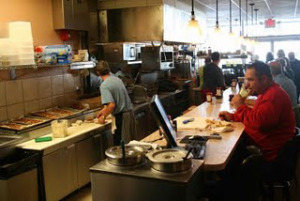 It’s funny how a little thing like that can make such a big impression.

A little later that month, I received an e-mail from someone named Rick Sebak. The e-mail was titled “Mmm. BREAKFAST!” I get a decent number of e-mails; most are great recommendations, a few are weird offers or ideas for projects. Rick said he was a producer with WQED Pittsburgh, that he was making a documentary about breakfast, and that he’d like to make Columbus part of the show. I’m sorry to say I didn’t fully understand or appreciate who Rick was, despite having a passing familiarity with his earlier documentaries. But I was smart enough to say yes, I’d love to be a part of it. Rick asked me to recommend a couple places they could visit. The Best Breakfast was on my mind, as was Skillet. 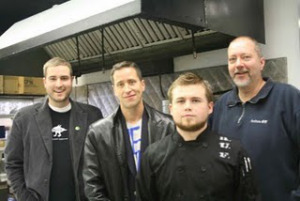 Skillet was a relative newcomer to the Columbus breakfast scene, although it was led by accomplished chefs Patrick and Kevin Caskey. Earlier that month, I had appeared on Good Day Columbus with Johnny DiLoretto at Skillet. They do wonderfully creative food; that day, I came home with leftover breakfast risotto for my wife.

Skillet and The Best. The innovative and the traditional. A great summary of the Columbus breakfast. I recommended the two, and Rick went for them. In early December, he visited and filmed first at The Best and then Skillet. I spent two fun mornings at the restaurants. Most of the time just observing Rick, his crew, and the restaurants at work, but also getting to jabber about breakfast, practice walking through the front door casually, and eating with an HD camera in my face. 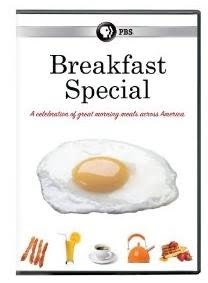 Breakfast Special aired July 14, 2010. That morning I got to chat on WOSU radio with Rick, Kevin from Skillet, Tom from The Best, and Lisa Dillman (aka the Restaurant Widow). We had a small party that night to watch my five minutes of fame. Rick sent us some signed copies of the DVD. The whole documentary is delightful, a true celebration of breakfast. I’ve watched it too many times. And Rick’s not done yet.

Since our first visit to The Best, we’ve had an exciting year. Over the course of 2010, we’ve traveled and sampled breakfast in New York City, Baltimore, Portland, Lexington, the Outer Banks, Pittsburgh, and in between. Nothing like a little travel to broaden your view, and bring some perspective on your own city.

The documentary gave my readership a nice boost. It made me feel grown up. It made me realize there was some significance to consistently writing (and hopefully improving) a blog over three years. I still flinch a little when I tell someone, “I’m a food blogger.” Not that I’m not proud of what I (or others) do. It just sometimes feels like I’m saying, “I’ve got this hobby and want to be taken seriously for it.” But experience is a great teacher, and other things have transpired to make this hobby feel a little more grown up: And that brings me to the announcement. (P.S. If you attended Pecha Kucha, I already spilled the beans.) But: I’m writing a book. Breakfast in Columbus, the complete guide. To help in-towners and out-of-towners discover all of Columbus’ unique breakfast stops: neighborhood diners, casual joints, upscale brunches, food carts, all of it. Pictures. Maps. Write-ups. Recommendations. Information. Fun symbols.

I’m working with Periodisa Publishing to print, market, and distribute (aka publish) the book. They’re a new company, but we’re excited about the prospects of working with them, and continuing to support the local scene. Look for official official announcements soon.

Also exciting about the project: photography and design will be done by the amazing Robin Oatts of Genre Creative. We’ve worked with Robin many times before, and absolutely love her work. She designed the Wild Goose Creative website, she tweaked my current logo, and any time we want pictures of our son Will, Robin’s our go-to. With Robin involved, we know the book will look spectacular, and truly show off Columbus’ breakfast scene.

The book should be out in later 2011. I’ll post updates, ask for suggestions, and maybe ask for some breakfasting buddies to help seek out obscure eats. And of course the actual writing and reviewing on the blog will continue, too. Lots more Columbus breakfast to document!

It’s Thanksgiving weekend, and I’m very grateful for the developments over the past year. Who’d have thought that a simple, warm welcome at The Best would turn into such a partnership, and be part of so many new opportunities? I never thought a lowly food blog (just one of a large number of high-quality ones in Columbus) would become something, however small that is.

Filed Under: Beyond
Tagged With: anniversary, breakfast with nick