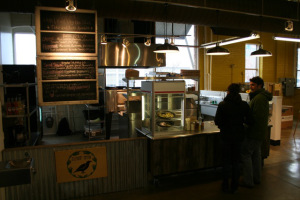 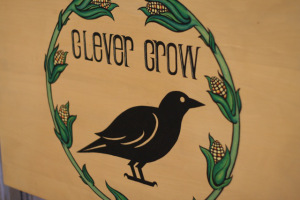 IMPRESSIONS & ATMOSPHERE: Pizza on a breakfast blog? Why, yes, I believe I will. Clever Crow Pizza has rapidly become one of the favorite pizzas around Columbus. Despite their original location inside the Circus bar in Short North, they’ve garnered enough attention to be featured in Anthony Bourdain’s and Michael Ruhlman’s now-notorious visit to Columbus for No Reservations. (For a full discussion of Columbus’ reaction to his visit, see here.) 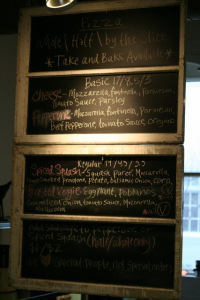 Just recently Clever Crow upped its profile by opening a space in North Market, too. Anyone who knows North Market knows that it’s a fantastic incubator for small businesses, so I hope that even greater things will come to owners Gary and Brooke Robinette. 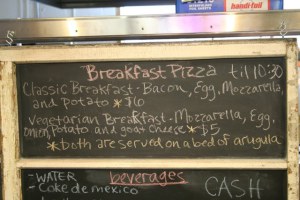 FOOD: This past Saturday, Clever Crow offered up breakfast pizzas for the first time, so I hopped in the van and headed down to a fairly quiet North Market. 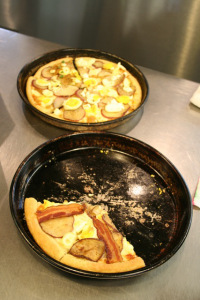 Brooke says that the breakfast pizzas will become a standard for Saturdays, and maybe for Sundays, too. They offer two types. The Traditional Pizza features your bacon, eggs, cheese, and potatoes. The Vegetarian drops the bacon and adds onion and goat cheese. 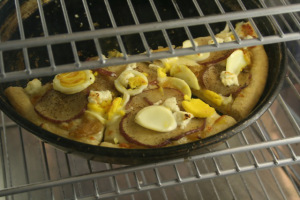 Both slices are served on a bed of arugula, with a dash of (I think) a vinaigrette dressing. 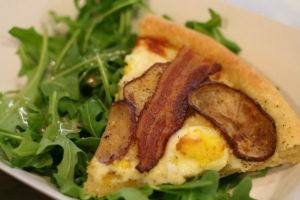 This is the Traditional. In some ways, it was surprising, in some ways, not. Clever Crow’s crust one of their benchmarks – a unique cornbread and sourdough mix – and they handled the breakfast ingredients well. I’ve seen some breakfast pizzas that overload the toppings, resulting in a chunky mess that falls apart, but not so here. The bacon was the right crispiness, the eggs hard boiled and sliced thin (including the yolk), and the potatoes were sliced the right size, too. So in most ways: it was exactly what you would expect a breakfast pizza to taste like. The arugula helps add a special tang of flavor. Overall, not bad, but not as surprising as some of Clever Crow’s other offerings. 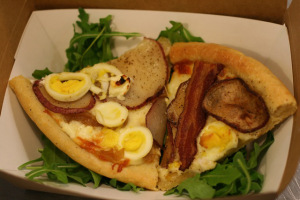 Same with the Vegetarian (on the left). Ingredients handled well, good flavors, excellent crust, but about exactly how you would think a vegetarian breakfast pizza would taste.

SERVICE: I chatted only briefly with Brooke, but both she and Gary seem to be doing well with their venture, and they clearly deserve the success. You can read more about their story on their official merchant page of the North Market website.

OVERALL: Great pizza, interesting take on breakfast. I wouldn’t necessarily rush back every Saturday morning for it, because it’s not quite as uniquely awesome as their other pizzas. But I’m excited to see where this will go, and it’s always nice to have another breakfast option in North Market.