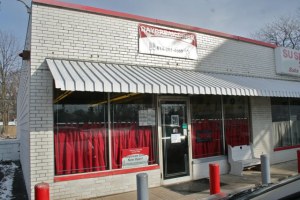 UPDATE: Ownership has changed, and the diner was going by Louie’s Daybreak Diner. 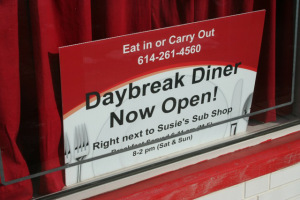 IMPRESSIONS: In my opinion, Columbus can always use another diner, especially to serve a neighborhood that doesn’t have one yet. So we were pleasantly surprised when we glimpsed the tiny store front of the Daybreak Diner down Weber Road. My brother-in-law and I are always on the lookout for more diner breakfasts, so we headed there on a free Monday morning. 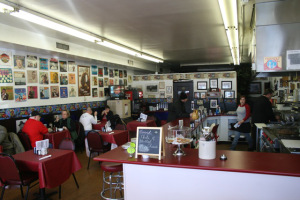 ATMOSPHERE: The diner was pretty quiet – only one other customer – when we first arrived, although the tables slowly filled up. Daybreak Diner is very diner-y. It’s like the owner had a checklist of The Things You Need In A Diner that he checked off one by one as he opened the restaurant. (P.S. that’s not a bad thing.) 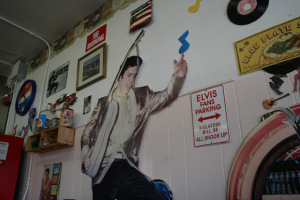 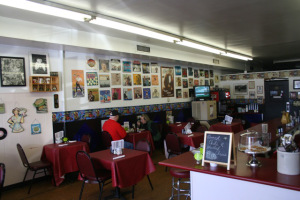 It’s all there. The only thing I didn’t like about the atmosphere were the TVs tuned to Jerry Springer or Maury Povich. I have nothing against TVs in restaurants; in fact, most of my favorite places will have a TV running a local/national news station or the Weather Channel. More and more I find daytime television off-putting, and while these TVs weren’t loud (that would be an entirely different issue), I just found it at odds with the laid-back diner atmosphere to have half-bleeped arguments and Maury repeating, “You ARE the father” in the background while I eat. 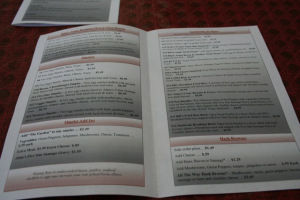 FOOD: Daybreak’s menu surprised me with a few new things for breakfast. Aside from the diner mainstays of egg combos, omelets, French toast, and pancakes, there are more unique offerings like a Cheeseburger Omelet, Breakfast Fried Rice, and Captain Crunch French toast. 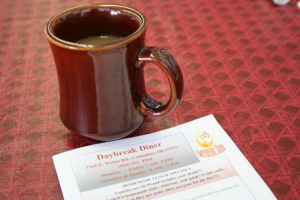 Coffee was served in those beautiful brown diner mugs. Check! The coffee itself was so-so diner coffee. 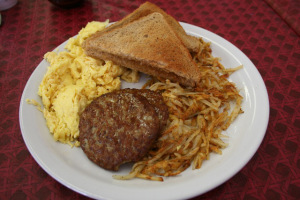 See that? That, to me, is a good diner breakfast: a big plate full of food. This is the Three Eggs platter. Toast and sausage were good, scrambled eggs done just right, not dry at all, and the hash browns were some of the best I’ve had in Columbus. Browned evenly without being burned, nice mix of seasoning on it. I saw the owner make a huge batch on the flattop, pouring them from a bag. I assumed they were frozen, but he said on Twitter they were not, so I’m guessing they were pre-made in the back? Maybe they’re not the greatest hash browns ever, but more places in Columbus serve home fries, so hash browns are always welcome. They’re my preferred preparation of breakfast potatoes. 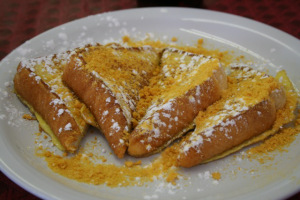 Out of curiosity, we had to order the Captain’s French toast. Mind you, we’ve had a superb version at the Blue Moon Cafe in Baltimore (and one featured on the Food Network, at that), so our standards are pretty high. Our expectations were dashed a bit when we saw that the Captain Crunch was sprinkled on top of the toast, rather than being part of the batter. I prefer it grilled to the bread itself, so that the sugary cereal gets caramelized and crusty. This was simply good French toast with a dusting of crushed cereal.

SERVICE: Our server was very nice. Took care of us just like you would expect. Very friendly. Kept our coffee refilled, helped accommodate my 2.5-year-old son, and the food came out quickly.

OVERALL: A mix of reactions, but overall very positive. The food blends nicely with the diner atmosphere and the service. Most dishes were maybe a $1 more than their equivalent at other diners around town, but nothing beyond-the-budget. And there’s some more interesting stuff on the menu that will make me return. At the very least, I want to have more of those hash browns.