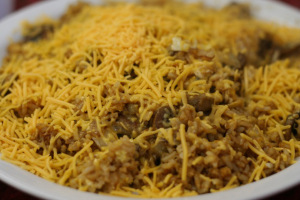 I wrote my full review of Daybreak Diner a couple weeks ago, but just recently the owner, Bill Kinniard, invited us back for another breakfast. We got to chat with him about the diner (which celebrated it’s one year anniversary on February 13), and he let us try some more dishes from the menu. Pictured above is Bill’s Breakfast Fried Rice. I’ve never seen this on a menu before. It’s essentially fried rice – cooked on the flattop with some soy sauce, I think – mixed with scrambled eggs, mushrooms, onions, sausage, and then topped (a la Skyline Chili) with cheese. We split this amongst the table, and devoured it pretty quickly. I can’t imagine eating one of these all on my own – it packs a salty, savory punch – but as a breakfast appetizer, it fits. 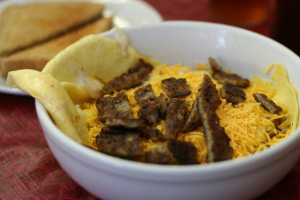 My wife tried the Daybreak Breakfast Bowl. Again, you don’t see a lot of bowls on breakfast menus, but this worked. If you like omelets, you can easily get behind this dish, basically an open-faced omelet in bowl. Add cheese, meat, hash browns, and some of their sausage gravy. Good diner eatin’. 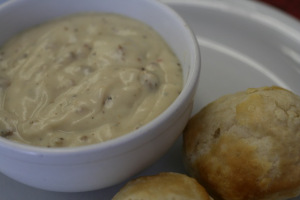 I tried Alma’s Five-Star Biscuits and Gravy. I had thought of this on my first visit, but opted for something different. This is good biscuits and gravy. Biscuits are fresh and obviously made in-house; I like how the biscuits are a little irregularly shaped. Baked goods shouldn’t always be uniform in appearance (see: DK Diner donuts). Gravy was good, too: thick and peppery. 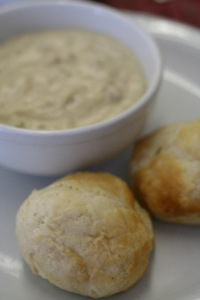 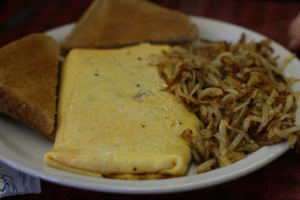 Another one of our party tried the Five Star Omelet, a cheese omelet filled with their sausage gravy. Again, don’t think I’ve seen that before. It stayed together fairly well. 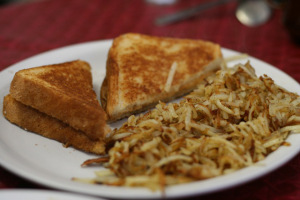 And finally, some Grilled Cheese with hash browns. Nothing says breakfast like grilled cheese, right?

Overall, another good meal at Daybreak. Thanks, Bill!