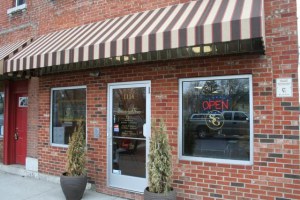 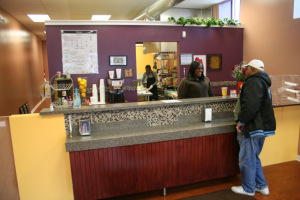 IMPRESSIONS: Smothered Gravy’s opening has been much-anticipated since the first announcement about it last September. I mean, look at the name! Smothered Gravy? Uh, yeah, who wouldn’t want soul food smothered in sauce? After much discussion and a false start, they finally opened on Saturday, March 19. The story of owner Eugena Dade is a pretty amazing one, given her heritage and all that she’s overcome to get here. In lieu of writing more about it here, I’ll just direct you to my article on her for (614) Magazine. 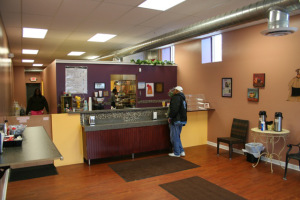 ATMOSPHERE: The couple times I’ve visited Smothered Gravy, the atmosphere has always been very laid-back. There’s no formal seating, save for a single table and a couple miscellaneous chairs. You can certainly dine-in, should you choose, but the seating is more intended for waiting carry-out customers. 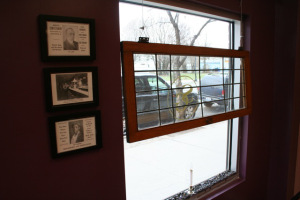 The decor is soft and simple. A few window decorations, some basic signage. The most interesting part is the black and white photos of old restaurants from Columbus’ East Side (including one of Eugena’s aunt’s old restaurant, which was located just down the street). 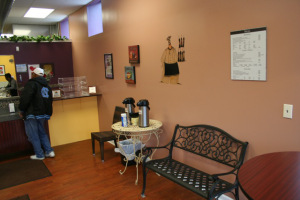 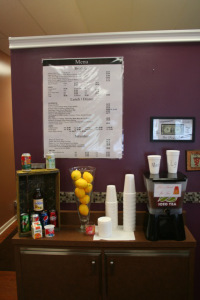 Their full menu is posted on the wall behind the counter… 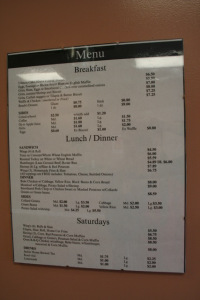 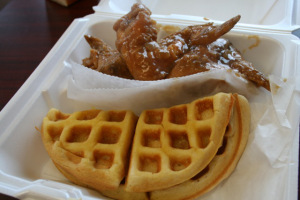 FOOD: Breakfast covers a lot of the soul food basics: salmon cakes, brown sugar ham, catfish nuggets, shrimp and grits. (Pssst… they even have Resch’s donuts.) Being a sucker for good chicken and waffles, I had to order them up. Your options on this dish are fried or smothered. I’ve had plenty of fried chicken with my waffles, so I opted for the smothered version. This means they’re simmered in a pan of gravy. The waffles were good – nothing too out of the ordinary. I liked the flavor of the chicken – the gravy is a tasty (if under-salted) onion gravy. But I think I missed the crispiness of the fried chicken. That seems like a better complement to the waffles. Overall, though, a decent version. 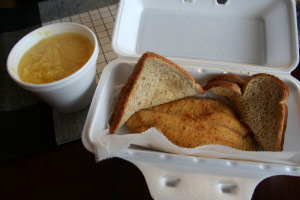 I liked the fried tilapia better. Cooked just right so it was flaky. Very light breading, simple seasoning (again, could be saltier and stronger). Served with a basic side of toast, plus a cup of the grits. This version was rich and buttery, and surprisingly sweet. Eugena said she adds some sugar to it. I’m more used to savory grits, but this was nice. I ate it all! SERVICE: If you visit Smothered Gravy, take the chance to talk with Eugena and her crew. They welcome you with huge smiles. Cooking is clearly in Eugena’s blood, and she welcomes you almost as a family member into her restaurant. 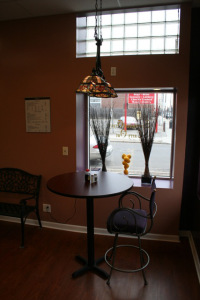 OVERALL: I think Smothered Gravy still has some room to grow, but it’s off to a good beginning. It’s hard not to root for Eugena, knowing her story, and her efforts to enliven the community around her deserve to be supported.

OTHER LINKS:
-> my write-up on Smothered Gravy for (614) Magazine