I know it’s mid-January already, but I’ve been behind, okay? I have a family and a job and a dog, and lots of other things. That’s why I’m writing my look back on 2011 now, even though we’re firmly planted in 2012. 2011 was full of highlights for us, not the least of which was welcoming our son Owen into the world in August. 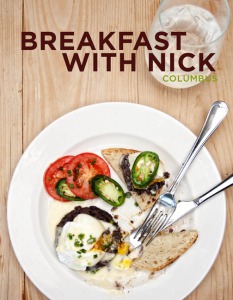 Breakfast-wise, the year was eventful as well. 2011 was defined by our work on the book. Photography started in March, and we worked consistently up until the November release. The year saw slightly less blogging while we focused on photographing, writing, designing, marketing – heck, publishing – the breakfast book. Some people have asked if I’m now going to move on to Lunch With Nick or Dinner With Nick, when in fact the book only showed me how many more places there are to visit around Columbus. So my work is far from done!

New Discoveries
Throughout the year, we found many new places to eat breakfast. Some had been around for years, some newly opened, some just started offering breakfast. These aren’t the only spots we visited, but they stuck out to me. 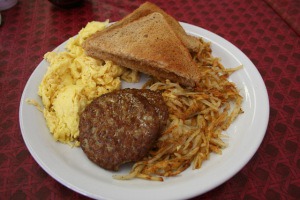 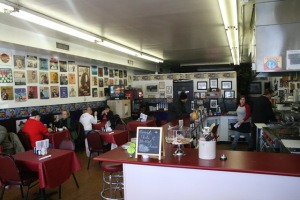 This small diner in the Linden neighborhood opened in early 2010. It’s small, simple, and easy to like. The space is loaded with diner goodies, and owner Bill makes some fun specialties like breakfast fried rice bowls and Captain Crunch French toast. Also: props to Bill for making some really good hash browns. They are hard to find around Columbus. 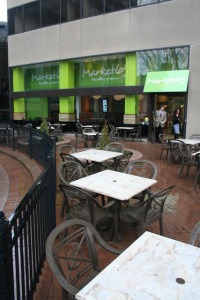 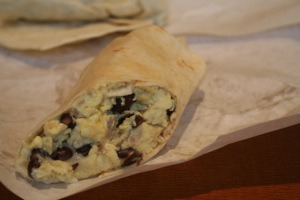 Indicative of the resurgence of downtown dining, Market 65 offers a bright and colorful atmosphere in which you can customize breakfast wraps and salads to your heart’s content. Drawing on local goods whenever possible, the market gives you a tasty and fast stop to grab breakfast, lunch, and even dinner on Capitol Square. 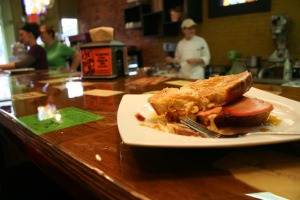 Although I haven’t made a “formal” visit to AB yet, I’ve stopped by a couple times and liked everything I’ve tried. Angry Baker, along with spots like Yellow Brick Pizza and L’Appat Patisserie, shows how the Olde Towne East neighborhood continues to revive itself. In addition to cinnamon rolls, muffins, brioche, and breads, breakfast dishes like the French toast sandwich are served all day. 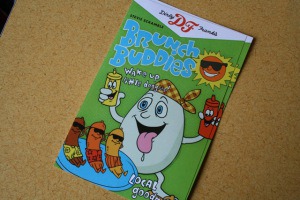 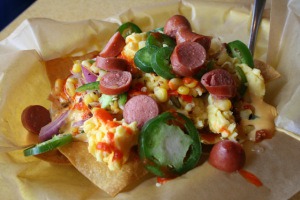 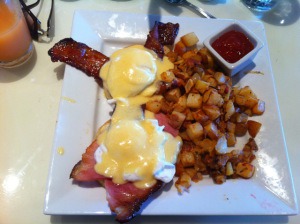 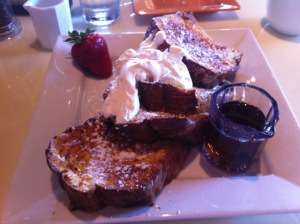 Chain restaurants aren’t all bad, especially when they’re willing to be creative and make dishes from scratch. We’ve enjoyed our handful of visits to Sweet Clove, which is a concept store from the Honey Baked Ham company. They piloted this location with a country kitchen theme, and large-portioned dishes like French toast and eggs benedict. 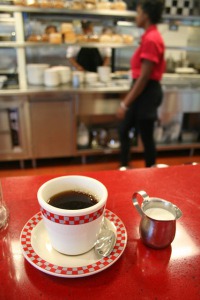 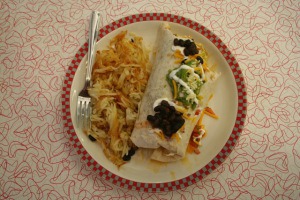 Admittedly, this is a new diner trying to be an old diner, but the concept of “diner meets the Buckeyes” is fun all the same. You can eat like a student with big servings of burritos, pancakes, sliders, and omelets, or go completely nuts with a breakfast buffet on football game days. Props to them for going all-out with the Buckeye theme: everything from plates to counters to flooring is scarlet and gray. 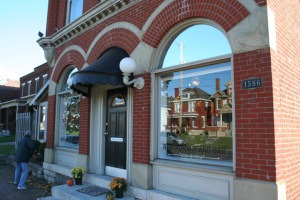 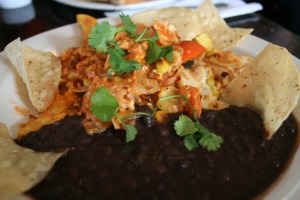 There’s been a lot of buzz about Explorers Club opening down in Merion Village. The owners bring with them a long history of much-loved Columbus restaurants, so needless to say expectations were high. There have been some complaints, although reviews are generally positive. It seems like some dishes are hit or miss, but we mostly enjoyed our visit there, if only because there aren’t enough places serving spicy Cuban food for breakfast around town. 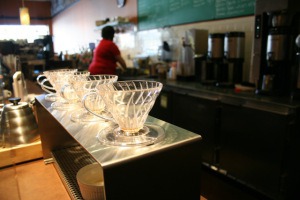 In 2011 I finally wrote about favorite coffee shops like Luck Bros in Grandview and Yeah, Me Too in Clintonville. 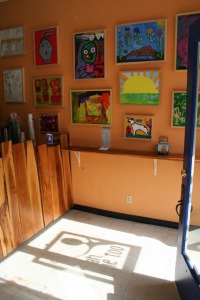 Columbus’ coffee scene continues to grow and evolve, with new roasters setting up shop and with more restaurants or stores serving their beans. We’re getting national attention for much of our food scene, and I can’t wait for our coffee shops to get their due.

Out of Town
We didn’t travel nearly as much in 2011 as we did in 2010 (it’s hard to beat Portland and New York in one year), but we did venture out for breakfast on a few trips. 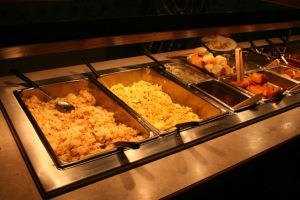 Where does a breakfast blogger go for his birthday? Out to Plain City for Der Dutchman’s breakfast buffet, of course! 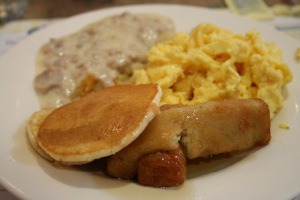 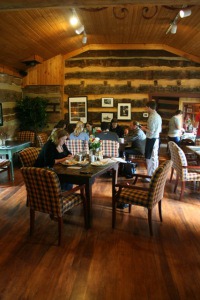 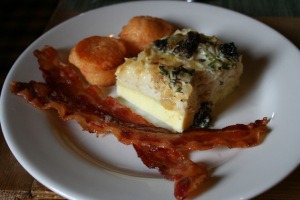 My wife and I were invited on a food/travel writer’s retreat to the Inn & Spa in May. This getaway is tucked amongst the rolling hills of Hocking County; there we enjoyed a tour of their accommodations, a hike around the falls, massages, morel hunting, a beer tasting (with the incredible Rockmill Brewery) and yes, breakfast. Along with house-made granola, we got a plate of bacon, muffins, and a breakfast casserole topped with morels. 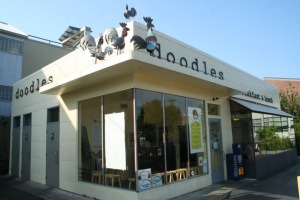 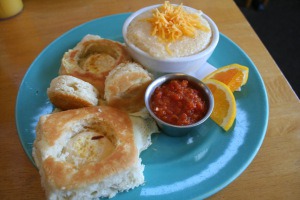 Doodle’s was my favorite breakfast find of the year. The experience itself was magnified because it kicked off a day of hanging out with my three brothers that included a distillery tour, shooting guns (not one right after the other), spicy Cajun food, beer, and movies. Apart from that experience, Doodle’s has everything I love in a breakfast: creative dishes (why had I never thought of Eggs in a Nest using a biscuit?!), loads of spices, colorful dishware and decorations, and a dedication to good food. They source ingredients locally, and advocate good preparation: for instance, a giant poster on the wall explains how to French press your coffee.

Worth a Revisit
2011 also saw some returns to old favorites, resulting in updated blog posts. 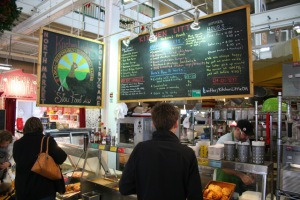 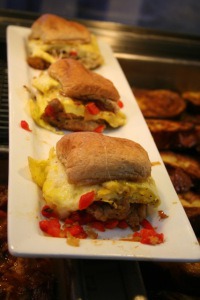 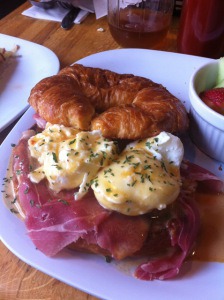 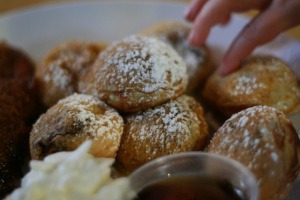 Over recent years, Cafe Corner has become another favorite of Columbus food lovers, despite a cramped space (which is only a problem in the winter). After Kathleen Day took over the cafe, she added the Spanish version of her name to the restaurant, and spiced up the menu with Latin specialties like breakfast tacos and pancake balls, plus the occasional Mexican eggs benedict (pictured up above), which will hopefully become a menu standard. (Please, Kathleen?)

In all, an exciting and eventful year. Here’s to many more breakfast discoveries in 2012!

Filed Under: Breakfast
Tagged With: 2011, highlights