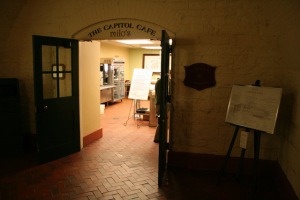 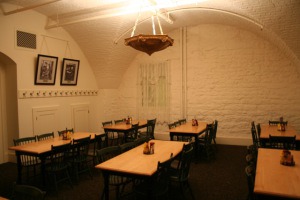 IMPRESSIONS: A few years ago, my wife worked for an event planning company, and one her first big projects was creating new Civil War-era Christmas decorations for the Ohio Statehouse. I helped occasionally with the project, and through that work we both got to know the Statehouse’s layout and history. It’s a grand old stone building, plunked down in what is now the center of Columbus’s busy-and-getting-busier downtown. 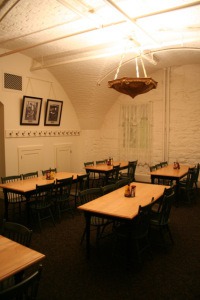 During that time, we got to know the Statehouse Cafe, a lackluster basement eatery that served the very basic cafeteria food. Because of their limited hours and slightly hard-to-reach location, the cafe never showed up on our food radar. 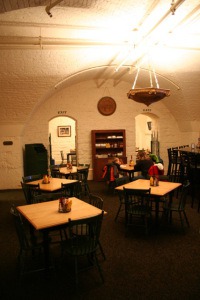 Until the summer of 2011, when the Statehouse announced it had been taking bids for a new cafe operator, and that the good folks from Milo’s Deli in Franklinton would be taking over. I’m sad to say I’ve never been to Milo’s (shame on me, I know), but I’m very familiar with Tommy’s Diner, which is owned by the same family, and we love everything about that diner. So the odds were good that we would like the cafe more when it was reborn as Capitol Cafe by Milo’s. 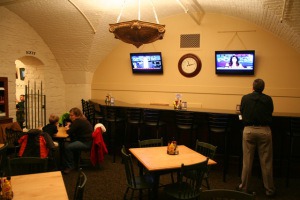 ATMOSPHERE: The Cafe’s change of ownership has resulted in a restaurant than actually has some personality. Sure, there are some aspects of the cafeteria style remaining, but the decor and food quality have taken it far beyond sloppy joe’s on a tray. The entire restaurant has been redecorated, which really maximizes the charm eating in the basement of 150-year-old building: vaulted brick ceilings, portraits of past governors, three small dining rooms. The new cafe owners added a bar in the main room; this meek and mild-looking bar has actually drawn some national attention in a debate over serving alcohol in a government building. 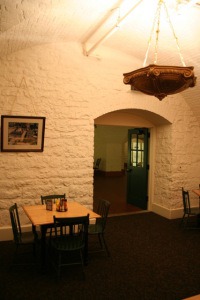 I liked this atmosphere. It’s nice and quiet, and eating in such an historic setting is fun. I kept looking around while we ate, taking it all the details. 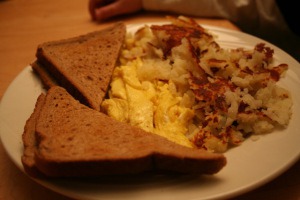 FOOD: We ordered a mix of dishes, some standards and some specials. For my three-year-old, we got the plate of 2 Eggs, Homefries, and Toast. This turned out to be a huge plate of food, especially considering that it cost about $4.25. It was more than enough for anyone, and we took home leftovers. Bonus points: it’s all well cooked. Homefries had plenty of brown crispy edges, the eggs weren’t dried out, and the toast was good and buttery. 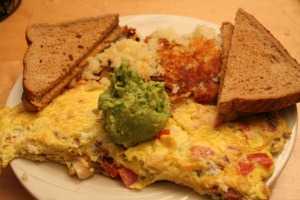 My wife and I split a couple specials. The first was the Cobb Omelet. This is obviously a cobb salad in omelet form, stuffed with tomatoes, bacon, turkey, and blue cheese, plus a dollop of fresh guacamole. Comes with big sides of toast and homefries. I’m not a huge omelet person, and I generally don’t like blue cheese, but I still enjoyed this omelet. They don’t skimp on the ingredients, and the guacamole itself was great (my wife makes amazing guacamole, so our standards are always high). 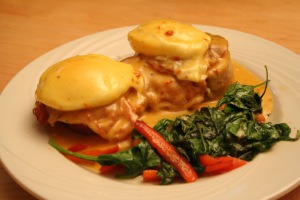 The real star of the morning, however, was the Italian Eggs Benedict. Eggs benedict is perhaps one of my favorite breakfasts, and Columbus needs more options for them. This benedict is a special that doesn’t always show up on the menu, but if you can order it, do it. This version is built on a fried polenta cake, then layered with prosciutto, poached eggs, and a rich hollandaise. It comes with a side of crispy red peppers and spinach. It packs a flavorful punch; the only downside for me was that the polenta cake is a tad salty. But this dish now has a place near the top of my favorite-benedicts-in-Columbus list. Serious, my wife and I geeked out about it. 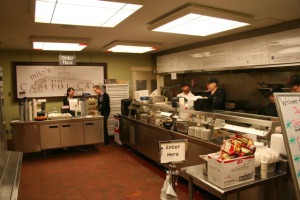 SERVICE:  The kitchen and ordering counter is the first room you encounter when you enter the restaurant. It may seem a little abrupt, and this is where the restaurant feels the most like the old cafeteria. But the process is smooth. You get a brief interaction with the kitchen crew, as you’re standing and ordering, and you can see into much of the prep area. The layout is easy to follow. Once you place your order – either take-out or dine-in – you can have a seat in the dining room and they’ll bring it out to you. 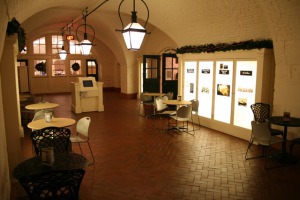 OVERALL: The location and hours work against the Cafe a bit: it’s only open weekdays – obviously aiming for the downtown lunch crowd – and it’s tucked far down in the basement of this gigantic old building. There isn’t any signage outside that would alert a passer-by to its presence. Parking isn’t easy, but it’s readily available: there are meters along Third and Broad, plus an entire garage underneath the Statehouse. But I encourage you battle against these things, because I think the Cafe is more than worth a visit. I’m still craving that Italian Benedict, and the atmosphere is hard to beat. And if you’ve never toured the Statehouse, now’s your time. It’s a beautiful building with a rich history. On the same floor as the Cafe is an interactive museum and the Statehouse Gift Shop (which may or may not carry a certain author’s breakfast book). 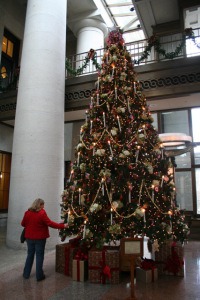 As a bonus, we visited when the Statehouse’s Christmas decorations were still up. These are the decorations that my wife created and installed years ago for her event planning job. After enjoying a tasty breakfast, we took some time to revisit them, and I encourage you to do the same when the holidays roll around again. 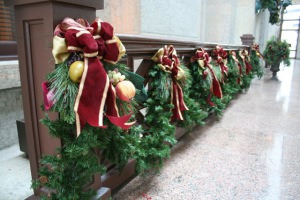 Filed Under: Beyond
Tagged With: cafe, Columbus, downtown, Ohio