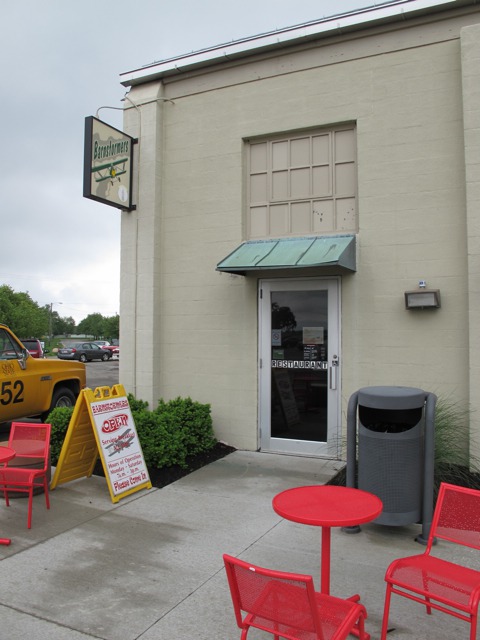 [UPDATE: Barnstormers Grill has closed, but has been re-opened under new owners as Jack & Benny’s Barnstormer Diner.] 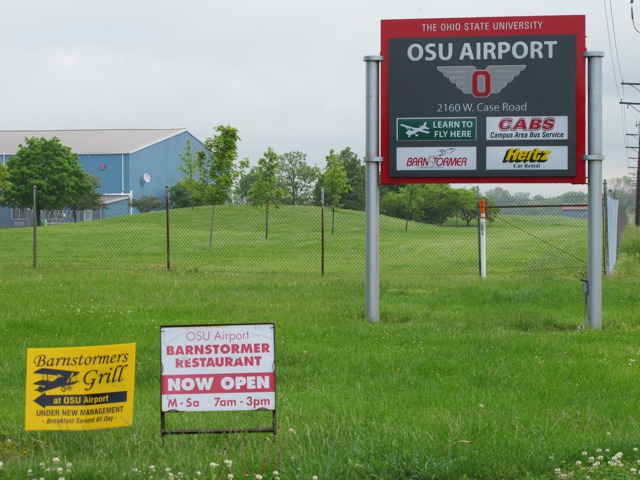 IMPRESSIONS: Oh, how I had loved the idea of The Barnstormer. Breakfast in an airport? Are you kidding me? Two of my favorite things! But alas, it wasn’t meant to be: I visited once in late 2009, had an okay experience, and then the restaurant quietly closed a couple years later. It was a missed opportunity. Until two days ago, when a reader sent me a message saying that the restaurant was re-opened under new management and serving good food! On top of that, the reader pointed out that you can you can go up in the old control tower, now converted into a simple observation deck. Needless to say, less than twenty-four hours after finding this out, I was eating breakfast and watching airplanes with my boys. 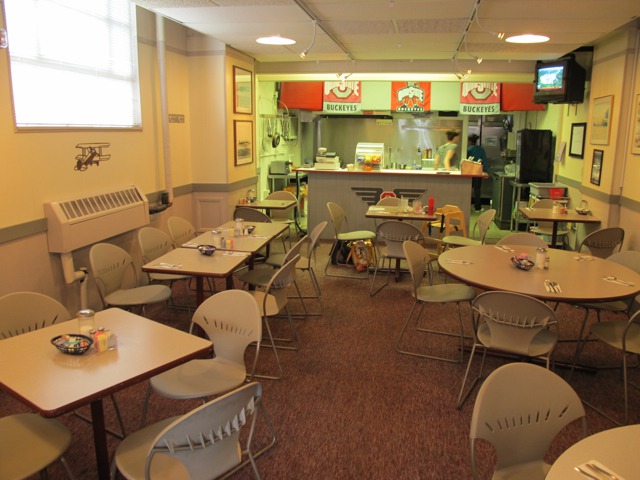 ATMOSPHERE: The restaurant space isn’t radically changed, although there are a few more dashes of OSU colors, and it’s brighter overall. Still a lot of aviation-themed decorations. It’s a three-and-a-half-year-old’s dream. (Oh, heck, I loved it, too.) There are plenty of tables scattered throughout the space; only one other was filled while we ate. 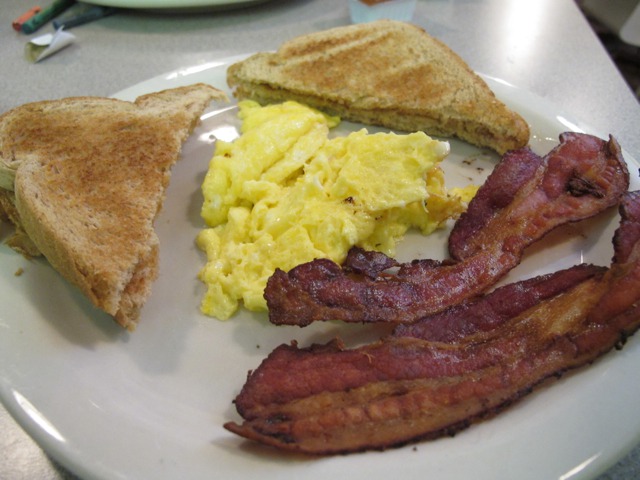 FOOD: The menu is simple and straightforward: four omelets (including a vegetarian option), four combination meals, and a kid’s menu. There’s plenty of a la carte items, too. Breakfast is like that. My son chose the Little Flyer: eggs, toast, bacon, and a drink. He didn’t have much of his bacon, so I tried some. Crispy, just the way I like it. 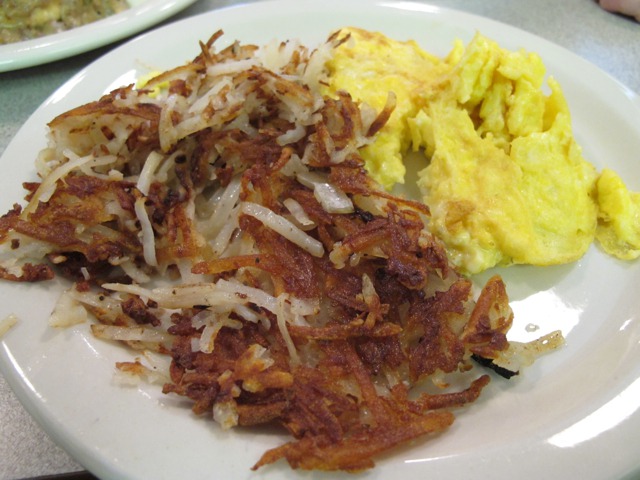 I was in a sausage gravy and biscuits mood (the dish is a new addition to the menu). It came with a heaping side of two eggs and hash browns. This is just one of the plates. Good crispy hash browns, and the eggs were wet enough, although they tasted slightly of that generic diner flattop cooking oil. 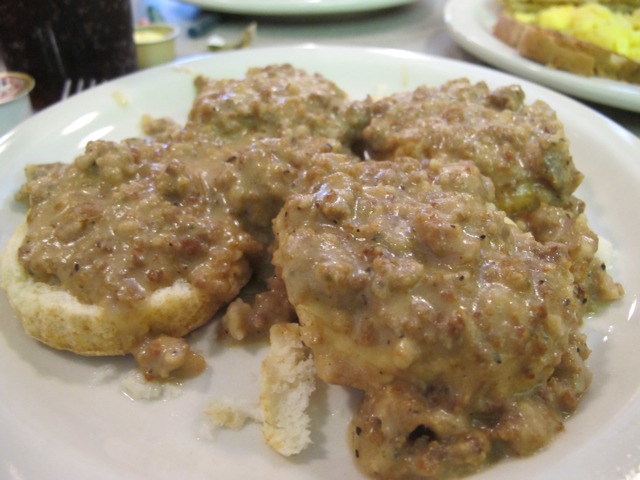 And this is the plate of biscuits and gravy. Two dense biscuits halved, covered in gravy. It was perhaps the thickest, meatiest sausage gravy I’ve had. Very dark, and pretty well seasoned. 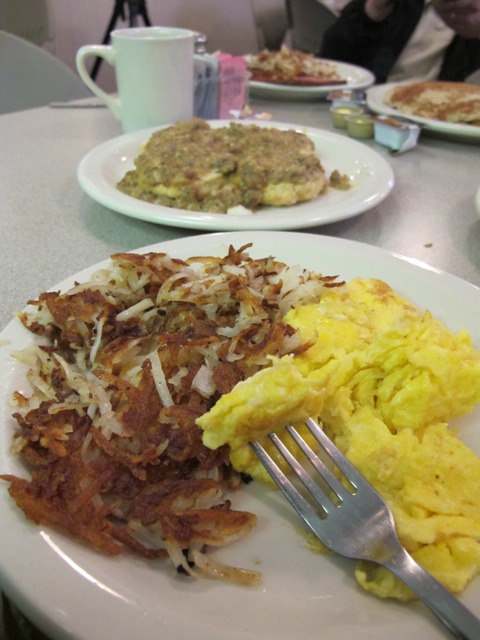 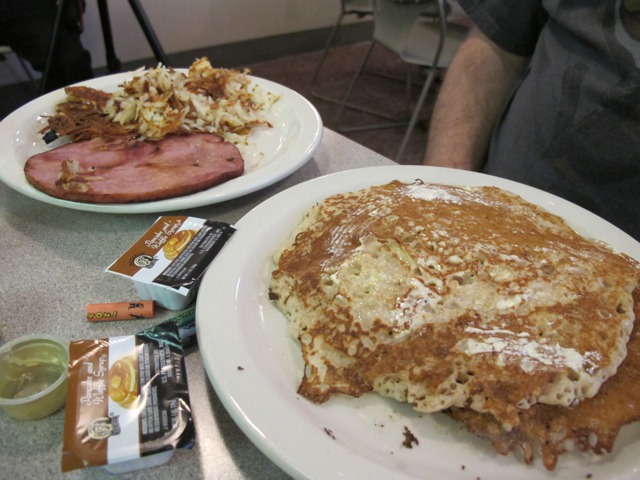 Our breakfast companion, Bill, ordered the pancakes and gave me a taste. Overall, very good. It was browned well on the grill, but spongy throughout. Good example of diner pancakes. 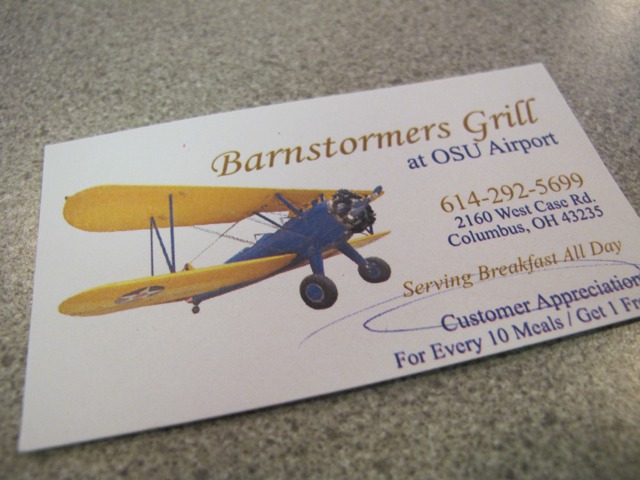 SERVICE: We were treated very nicely by our server and by owner Jodi Perez. It certainly helped that there weren’t many people in the restaurant, but they were very attentive and our food came out quickly. Our server left this card with us at the end of the meal. I don’t think I’ve seen a breakfast punchcard before! 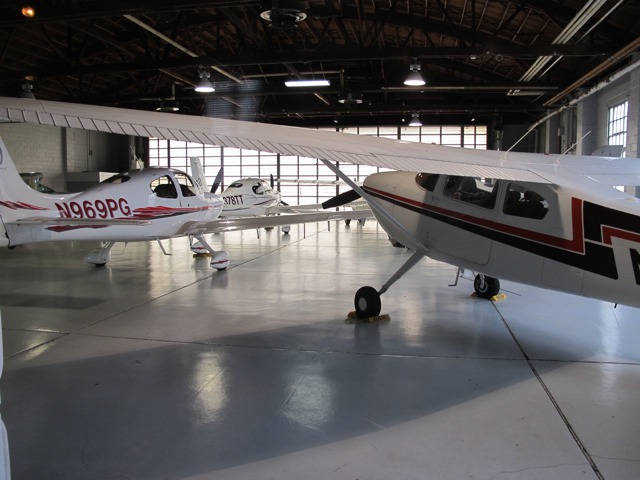 OVERALL: I think the new management and little makeover for Barnstormer (now renamed Barnstormers Grill) is just what it needed. The space is brighter, the menu is more focused (I’m told they have good burgers for lunch), and it’s a little better connected with the airport itself. The improved food makes me want to return, whereas the previous version didn’t. And knowing more about the airport grounds makes me want to visit every morning. The restaurant is just a small room connected to one of the hangars. This is the view through the service door that leads into it. 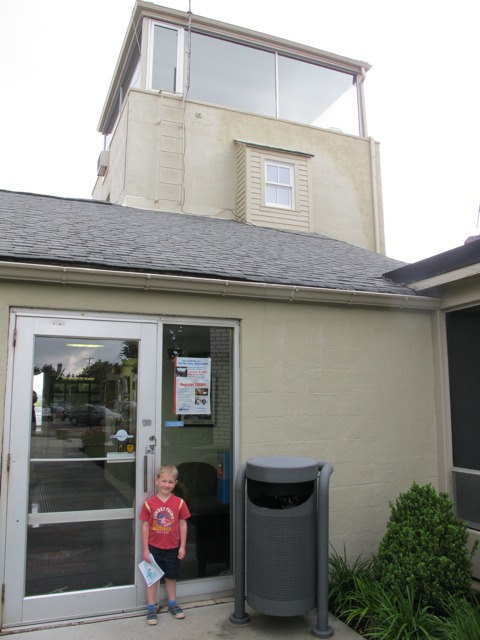 Of course the boys and I went exploring afterward. Just outside the door to the restaurant is this entrance to the airport terminal. At the top of the picture is the old control tower, now the observation deck. It’s reachable by a series of short flights of stairs. 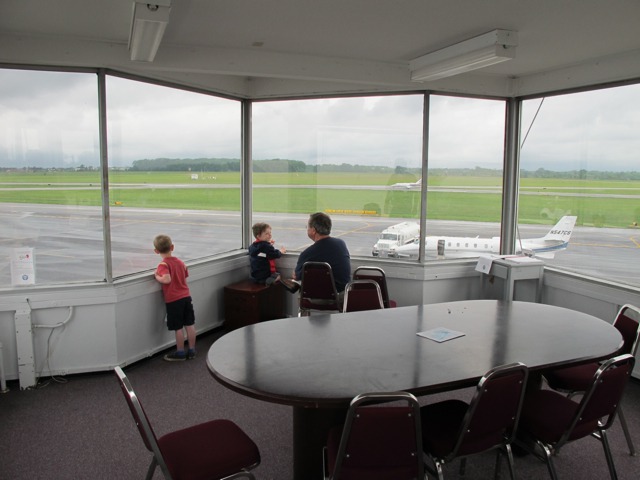 But the view from the top is pretty awesome. You’re right next to the runway and the plane “parking” area. There’s a table and chairs, so you could order your breakfast to-go and then come up here. Just sayin’… 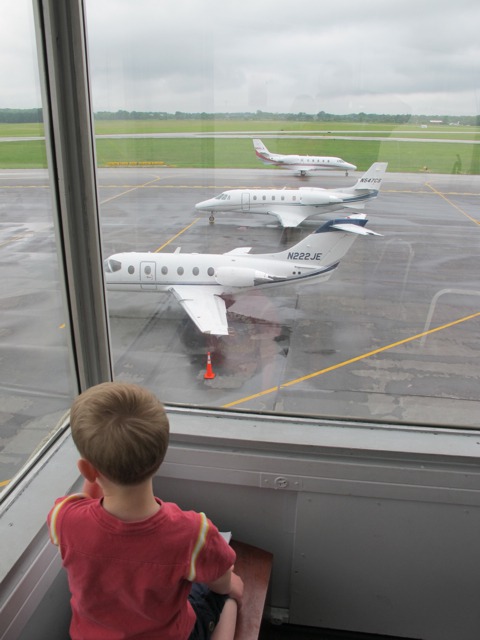 Breakfast and some plane-watching made for an enjoyable morning, especially given the company.

Filed Under: Beyond
Tagged With: airport, Columbus, diner, Dublin, Ohio