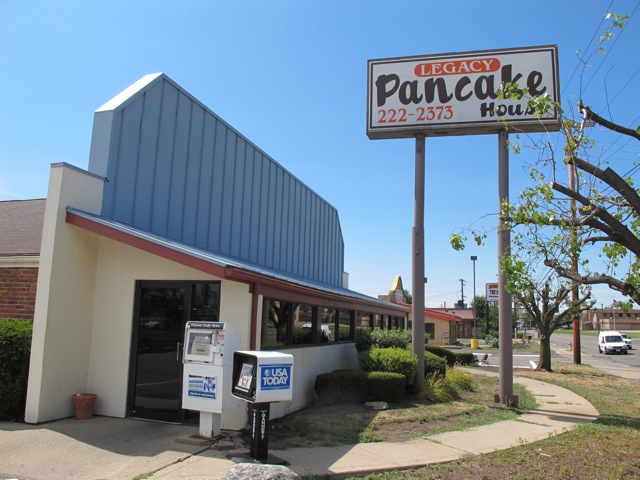 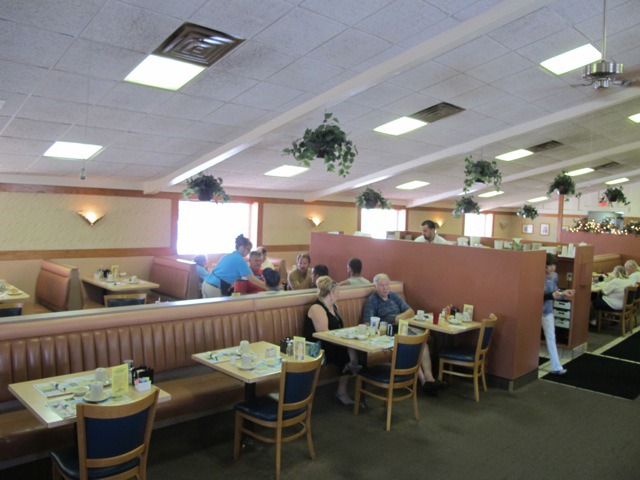 IMPRESSIONS: This summer we’ve tried taking a number of family day trips around Ohio, and we finally nabbed the opportunity to take our boys to the Air Force Museum in Dayton (which is well worth the visit). Of course, any day trip is automatically preceded by breakfast somewhere nearby. A couple years ago, a student of mine told me I needed to visit the Golden Nugget; unfortunately, it isn’t open on Mondays. Also unfortunately, I didn’t do good enough research to know they weren’t open, so we found ourselves scrambling and searching for a place that was open. But we lucked out and discovered the Legacy Pancake House. 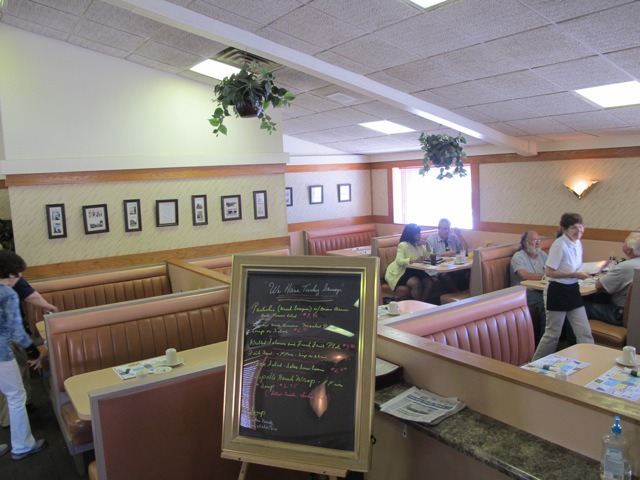 Legacy is actually located in the space of the original Golden Nugget, on the north side of Datyon. The current GN is in a fancier building further south. 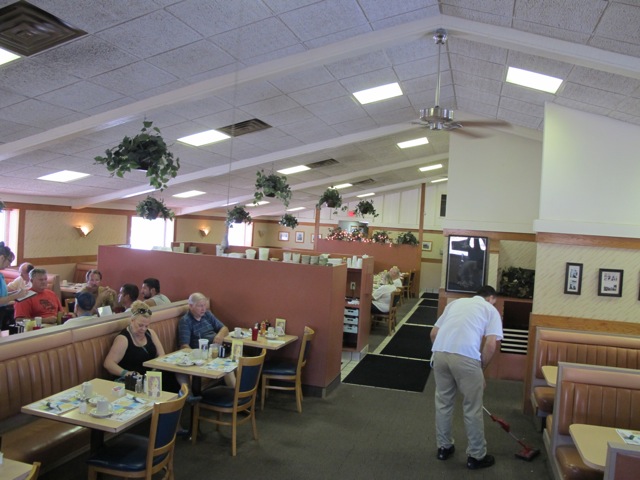 ATMOSPHERE: The pancake house is a genre of breakfast joints that I haven’t explored much. Of course, they most recognizable version is IHOP, but apparently Dayton is a pancake house hotspot. What’s different about a pancake house? I can’t really tell, except that pancakes feature significantly on the menu. Legacy’s building is shaped with the tall, slanted roof. There are different sections for seating, mostly booths. Otherwise the decor consists of mauves and beige, dotted with plastic hanging plants. 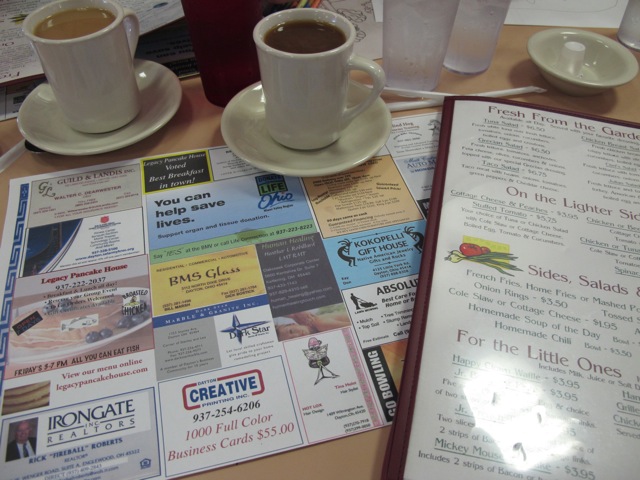 FOOD: The breakfast menu is fairly broad. You can read through it by visiting Legacy’s website, which is essentially a giant image of their menu and the paper placemat full of local advertising. 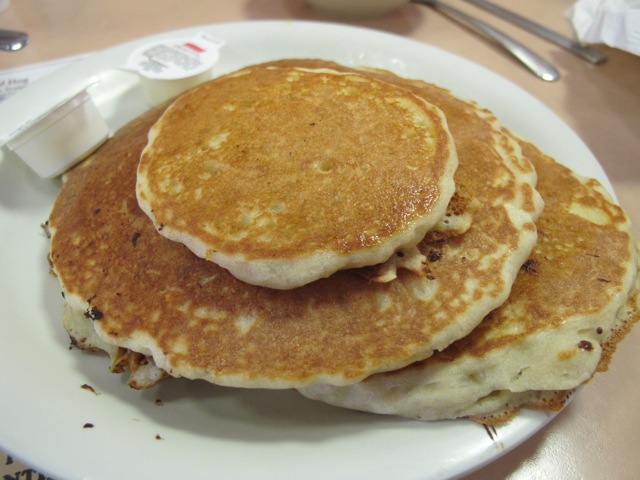 Of course, I had to order some of their “famous” pancakes. 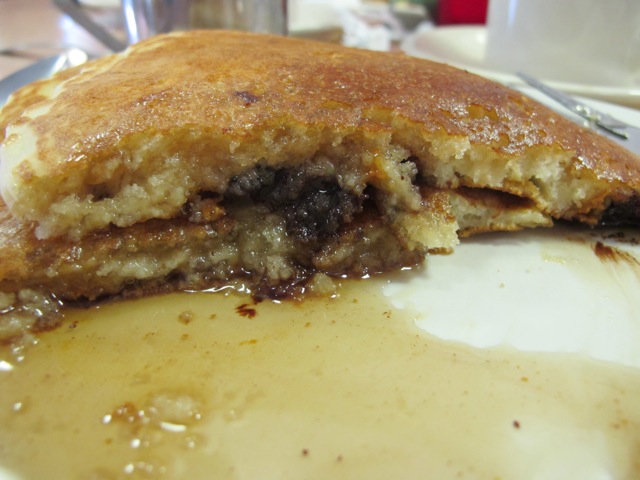 I was most definitely in a sweet mood, so I requested the peanut butter chocolate chip pancakes. They were delicious and easy to like, if maybe a little rich. Of course, it’s hard to complain about them when I’m the one pouring syrup over them. 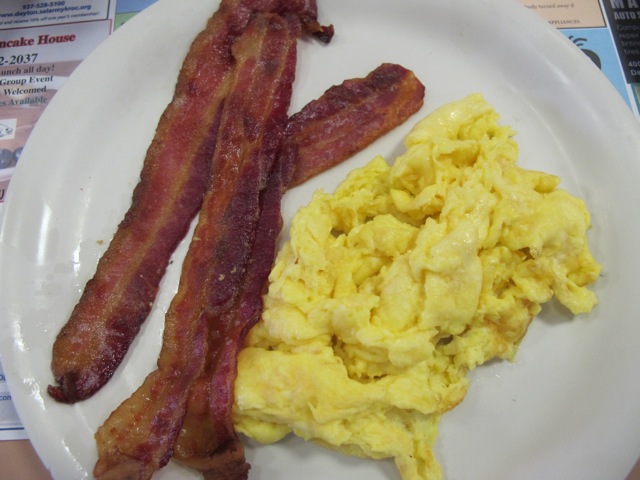 I wanted some savory, too, so I chose a plate of bacon (crispy and good) and scrambled eggs. The eggs were funny. Not bad, but they almost tasted a little milky, like they had added too much milk to them. (I grew up adding a dash of milk to my scrambled eggs. Did you?) 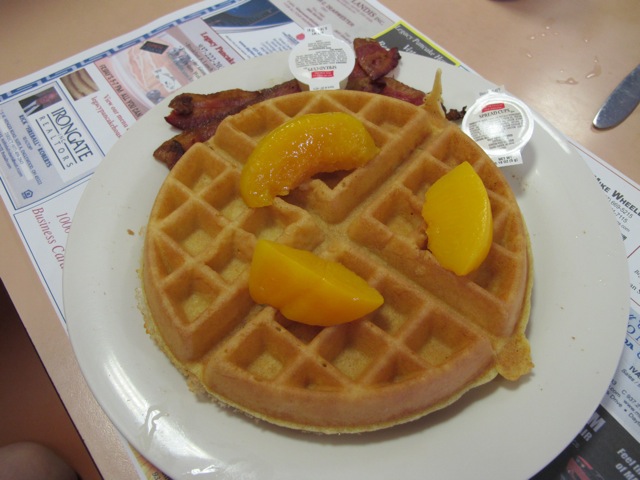 Our four-year-old chose the happy clown waffle, which was a waffle with some peaches. He seemed to like it. 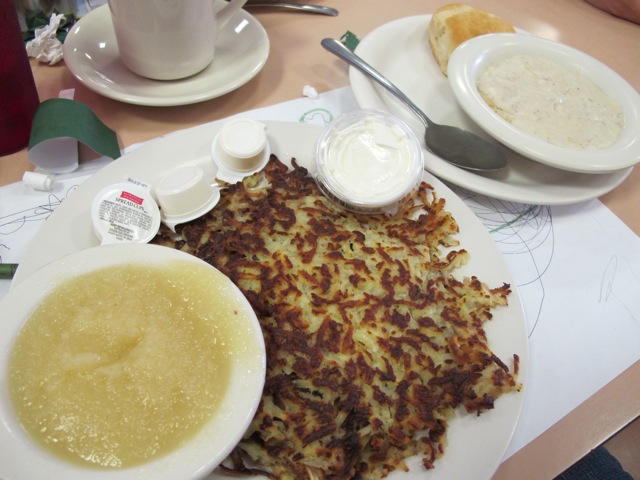 The real winner of the morning for us were the potato pancakes. They were served with the tradition garnishes of sour cream and apple sauce. It’s hard to pinpoint what exactly stood out about them, but they were crispy on the outside, soft on the inside, and seasoned just right. 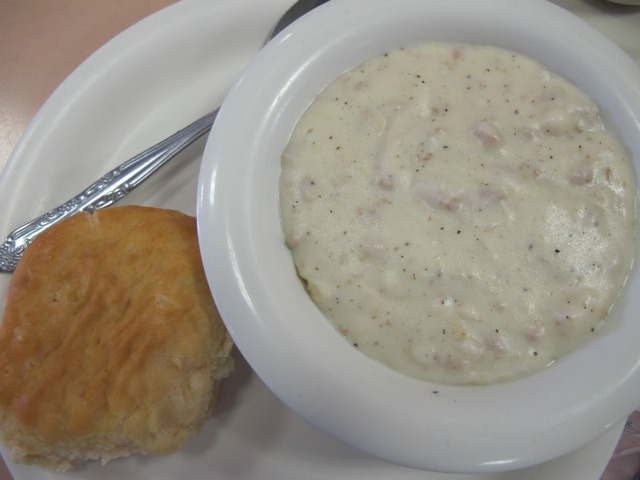 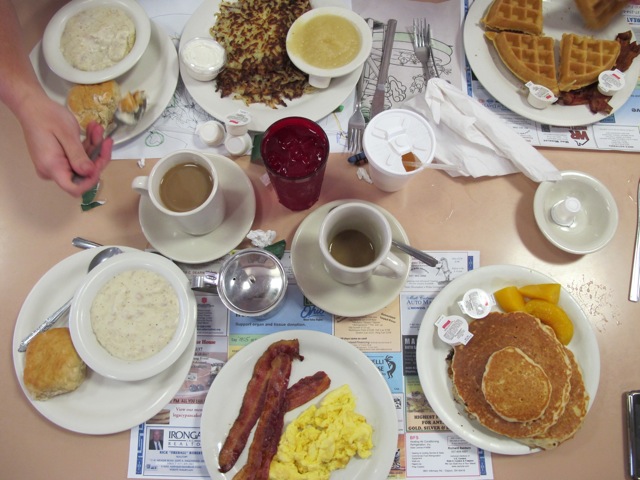 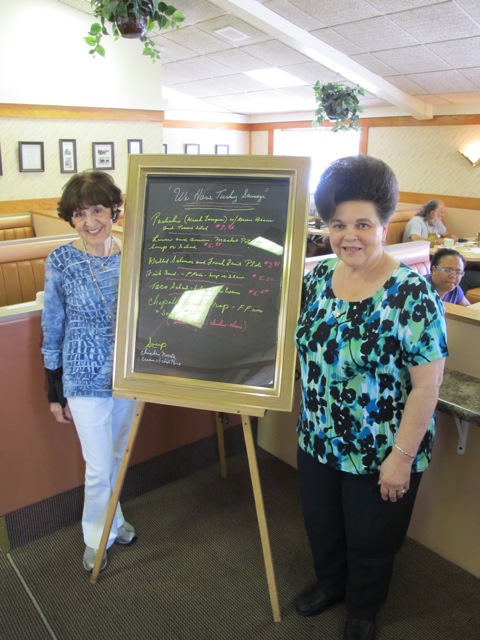 SERVICE: Our service was really stellar and charming. We were seated by Bertie (on the left), who was incredibly sweet. On the right is Stacie, one of the owners (also very sweet). Another customer told me that Stacie and her husband once owned a small diner in downtown Dayton. They closed the diner roughly six years ago, but a year later, when this location of the Golden Nugget went up for sale, they bought the building and opened Legacy. 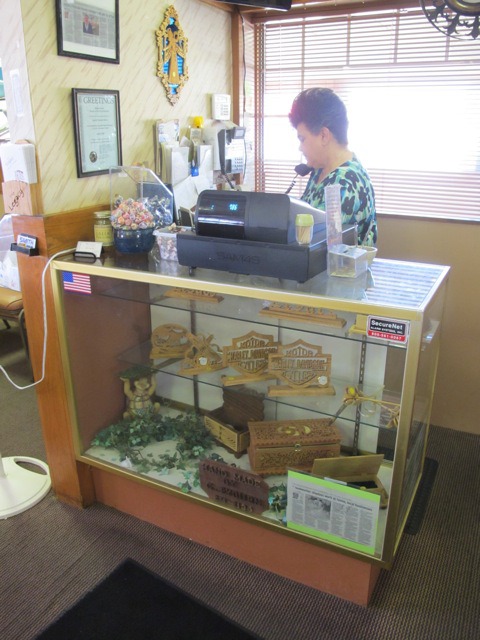 Here’s Stacie behind the counter. Gotta love her hair. 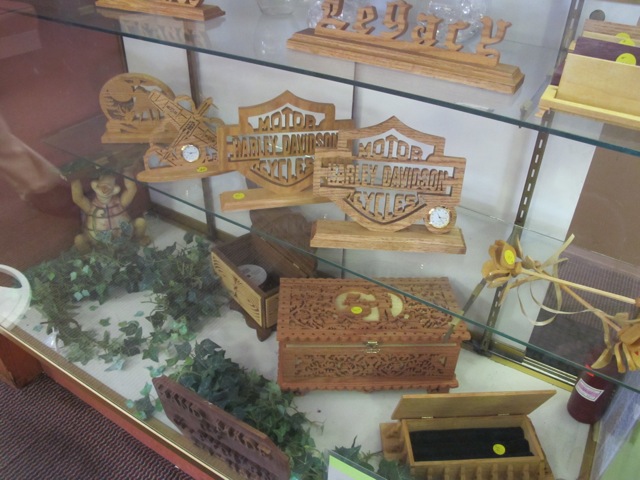 At the cashier’s counter is a display of wooden carvings made by a local artist, all for sale.

OVERALL: Legacy Pancake House is uncomplicated but completely charming. I get the sense that we experienced a little bit of Dayton culinary history when we were there. The food doesn’t stand out as spectacular, but it’s easy to love, from the pancakes to the waffle to the potato pancakes. I’ll continue exploring other breakfasts around Dayton, but I think a trip to the Legacy is certainly worth making.