Whew! What a year 2012 has been! Naturally we like to look back on New Year’s Eve, so here are some highlights that have stood out for me, breakfastally speaking: 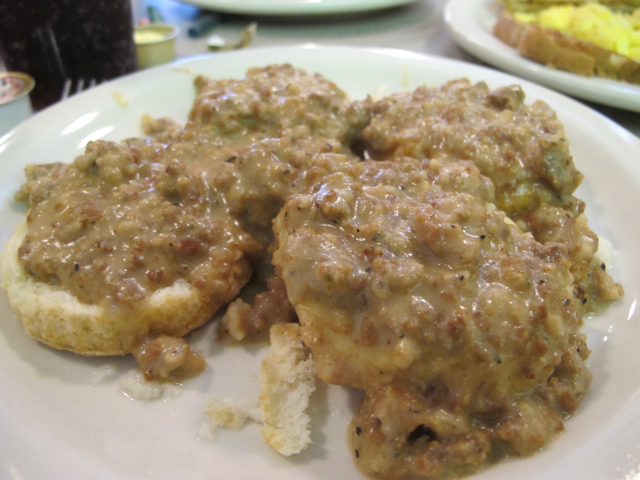 Barnstormers Grill – the little diner in the OSU Don Scott Airport was reborn this year as Barnstormers Grill. The space and the menu got some small updates which resulted in a brighter restaurant and a more solid breakfast lineup. I especially enjoyed their very thick and meaty sausage gravy and biscuits. Bonus that you can also go sit in the old control tower and watch planes taking off and landing!

Auddino’s – I made a first trip (of many) to this long-running family bakery this year. The tiny retail shop occupies one small corner of their big wholesale facility. You can visit with the Auddino family while you pick up cake donuts, lobster claws, and their special glazed croissants. This year has been a good one for them, too: Auddino’s expanded with a cafe in Mill Run in Hilliard. 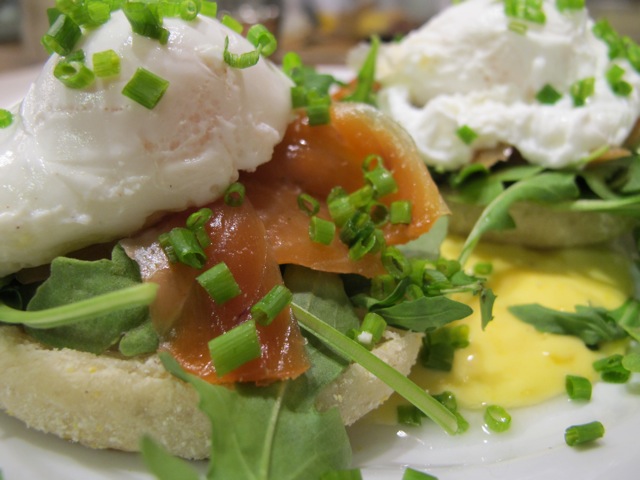 161 Diner – the diner counter inside the Dublin Whole Foods Market serves a solid weekend brunch, packed with thick French toast, corned beef hash, omelets, and sandwiches. They retooled the menu earlier in the year, adding some new favorites like the gravlax salmon benedict.

Jury Room – I’ve been totally remiss on reviewing the brunches at Columbus Food League restaurants, especially when they define comfort food in Columbus. While I’ve visited Tip Top’s and Dirty Frank’s for brunch, I haven’t written about all of them. Fortunately, we did slip in an early visit to Jury Room for cocktails, breakfast burgers, and B.E.L.T. sandwiches, and we plan to hit them up again and again. 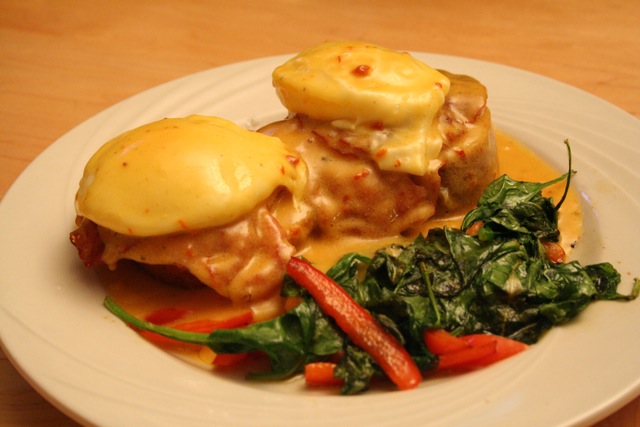 Capitol Cafe By Milo’s – one of our favorite early discoveries was the newer Capitol Cafe in the basement of the Ohio Statehouse. The Pappas family (from Tommy’s and Milo’s) took over the cafe operations and created an actual restaurant out of it. It’s hard to beat the vaulted brick ceilings, marble staircases, and grand sense of history of the Statehouse. It’s also hard to beat their Italian benedict when they’re serving it.

Dinin’ Hall – 2012 has certainly seen an explosion of magnificent food trucks around Columbus, as well as locations and events dedicated to supporting them, from the Food Truck Fest downtown to OSU’s hiring of the trucks to FoodFort’s hard work supporting them. Foremost amongst these is Dinin’ Hall, Columbus’ first food truck pod, located at 400 W. Rich in Franklinton. Dinin’ Hall does a lot of special events, including some weekend breakfasts complete with coffee carts and specialized brunch menus from Columbus’ best trucks. 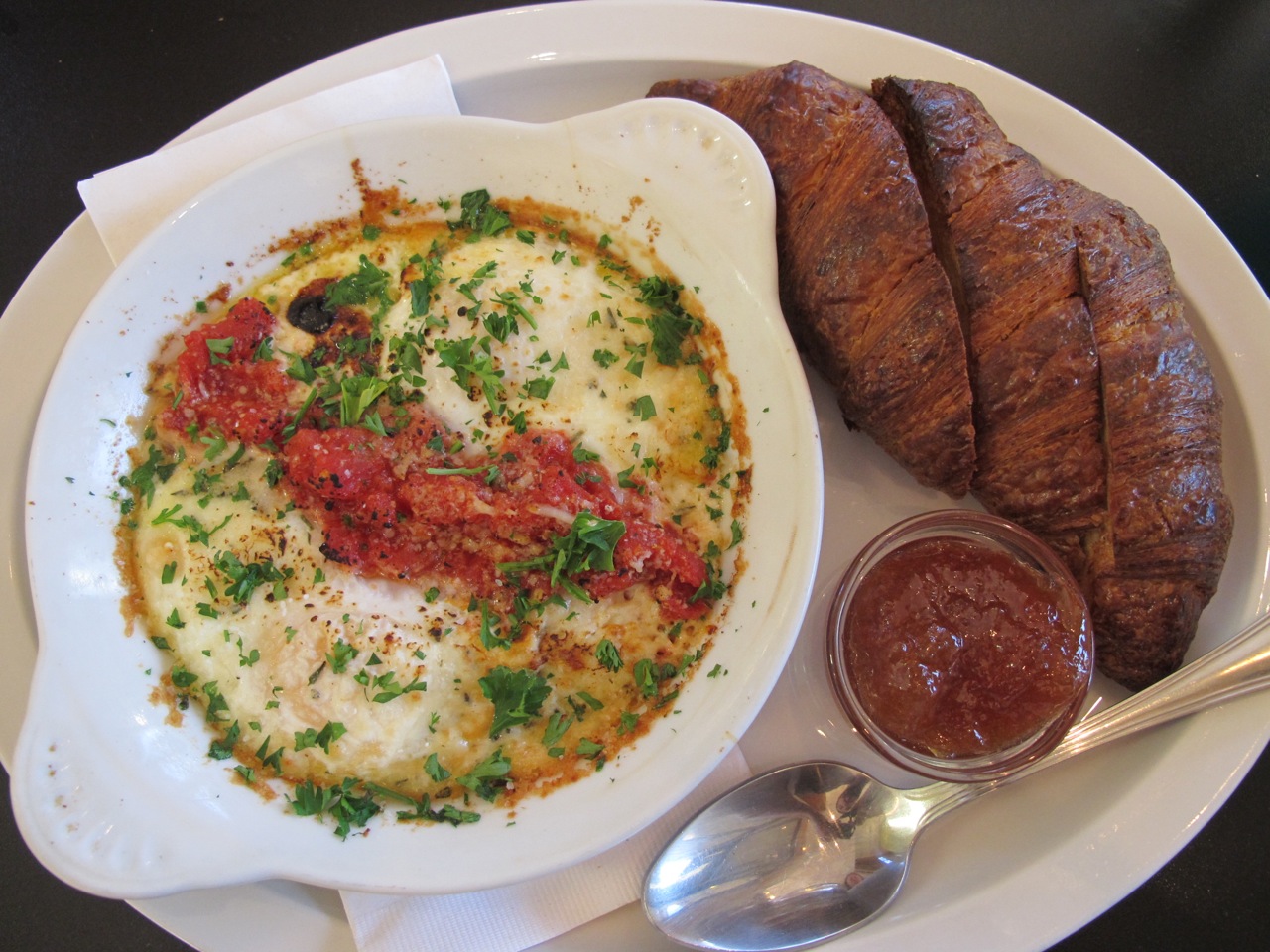 Pistacia Vera – Pistacia Vera is already a Columbus favorite brunch spot, but I finally wrote about it toward the end of this year. Everything about PV makes it an easy recommendation to out-of-town visitors, from the beautiful macaroons and croissants, to their baked eggs and quiche.

Angry Baker – speaking of beautiful bakeries, Angry Baker has become a mainstay of Olde Towne East, with brioche and muffins, plus prepared breakfasts like vegan biscuits and gravy and French toast sandwiches. 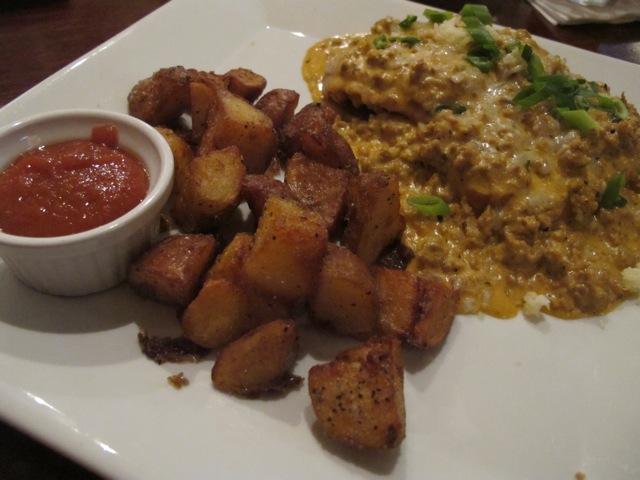 de-NOVO – one of our favorite surprise discoveries is the breakfast at de-NOVO bistro & bar downtown. Their underrated breakfast includes rich flavors in good-sized portions. We especially liked the mushroom omelet and the chorizo biscuits and gravy. de-NOVO is set up more like a fancy cocktail bar, but their breakfast deserves more attention, too! 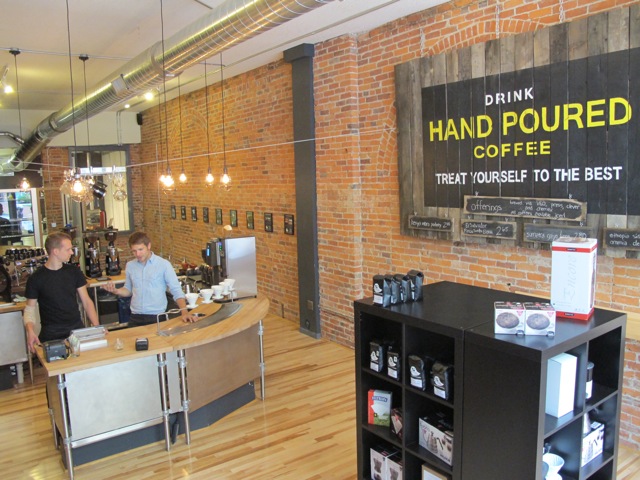 2012 has been another great year for coffee in Columbus, too, with the first North Market Coffee Roast in March, to the opening of fantastic spots like One Line Coffee and Mission Coffee in Short North, to our personal new favorite, the Hemisphere Coffee Roaster cart in Clintonville. Here’s hoping that Columbus roasters and brewers continue to get the attention they deserve in 2013! 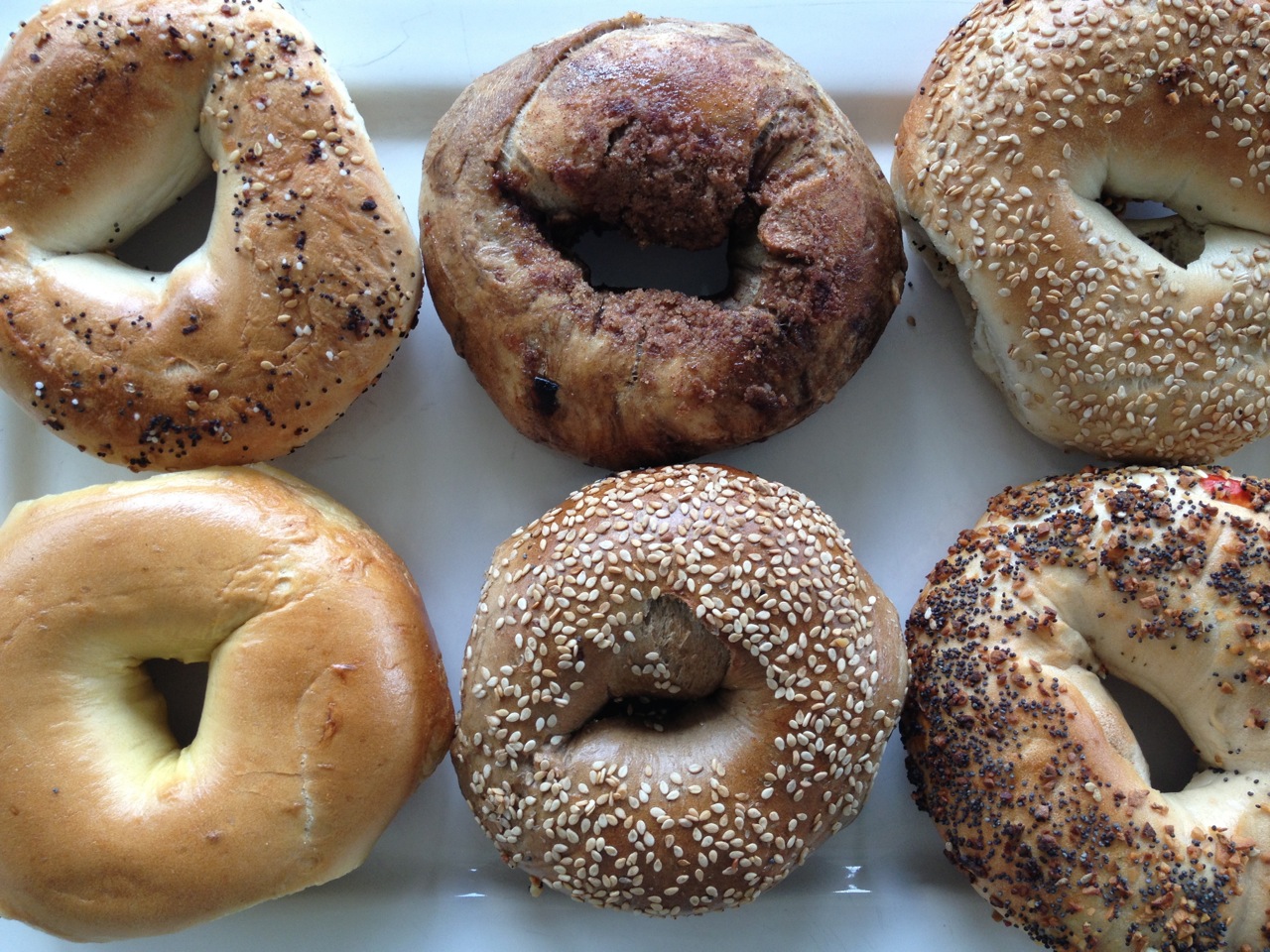 Even before our New York City trip in October, 2012 was feeling like the Year of the Deli. New York-style standouts include some delicious corned beef and eggs at Danny’s Deli downtown, plus a home delivery of fresh bagels from Sammy’s New York Bagels. 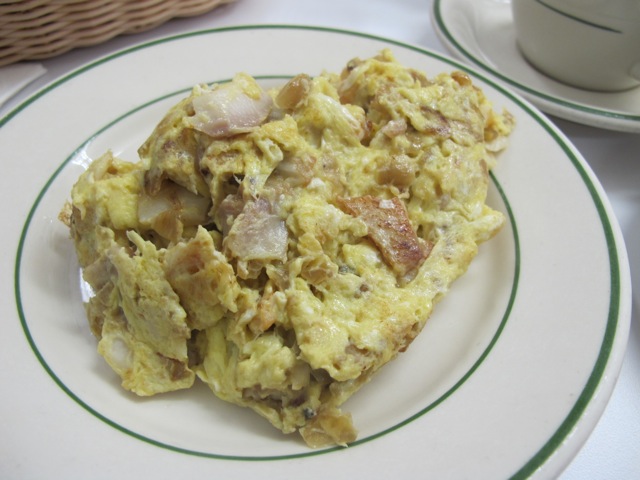 We were fortunate to be able to travel a bit this year, including a short but busy weekend in New York City. Of course good food abounded, from porgy soup at Momofuku Ssam Bar to late-night Belgian waffles at the Wafels & Dinges truck, an incredible breakfast of lox, bagels, and sturgeon at Barney Greengrass (one of my favorite breakfasts of the year), amazing pastries at Sullivan Street Bakery, and finishing with donuts at Dough and my first ever egg in a nest bagel at Bergen Bagels. 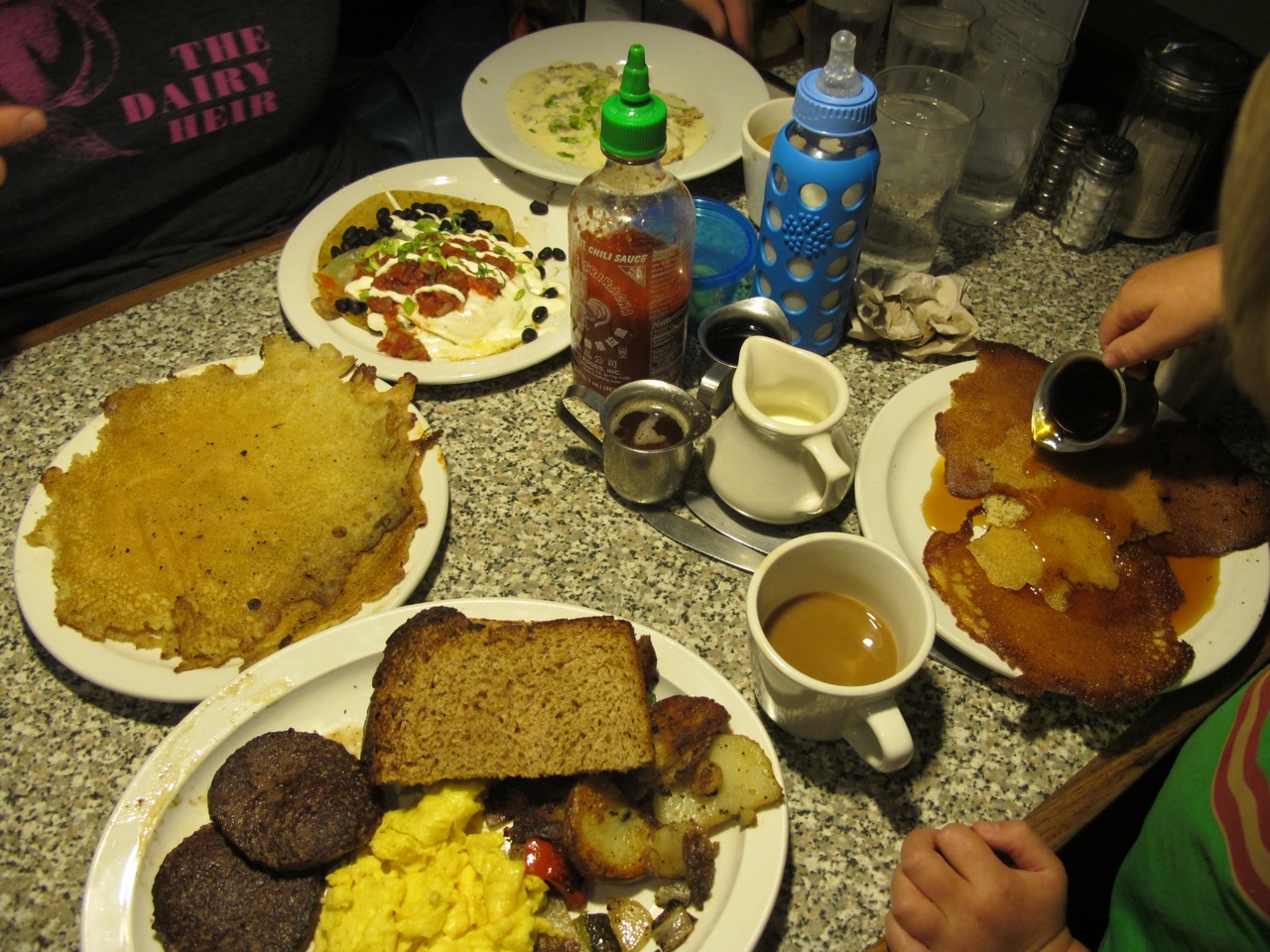 We also made some smaller trips, like discovering the old-style Legacy Pancake House in Dayton to the very excellent Sunrise Cafe in Yellow Springs. We also visited family again in Lexington, Kentucky, finally having brunch at Alfalfa downtown and picking up some crack-laced melty yeast donuts from Spalding’s Bakery. Back in my hometown of Grand Rapids, we explored the new Trillium Haven farm-to-table restaurant, plus the hip Rowster Coffee (write-ups to come soon!) 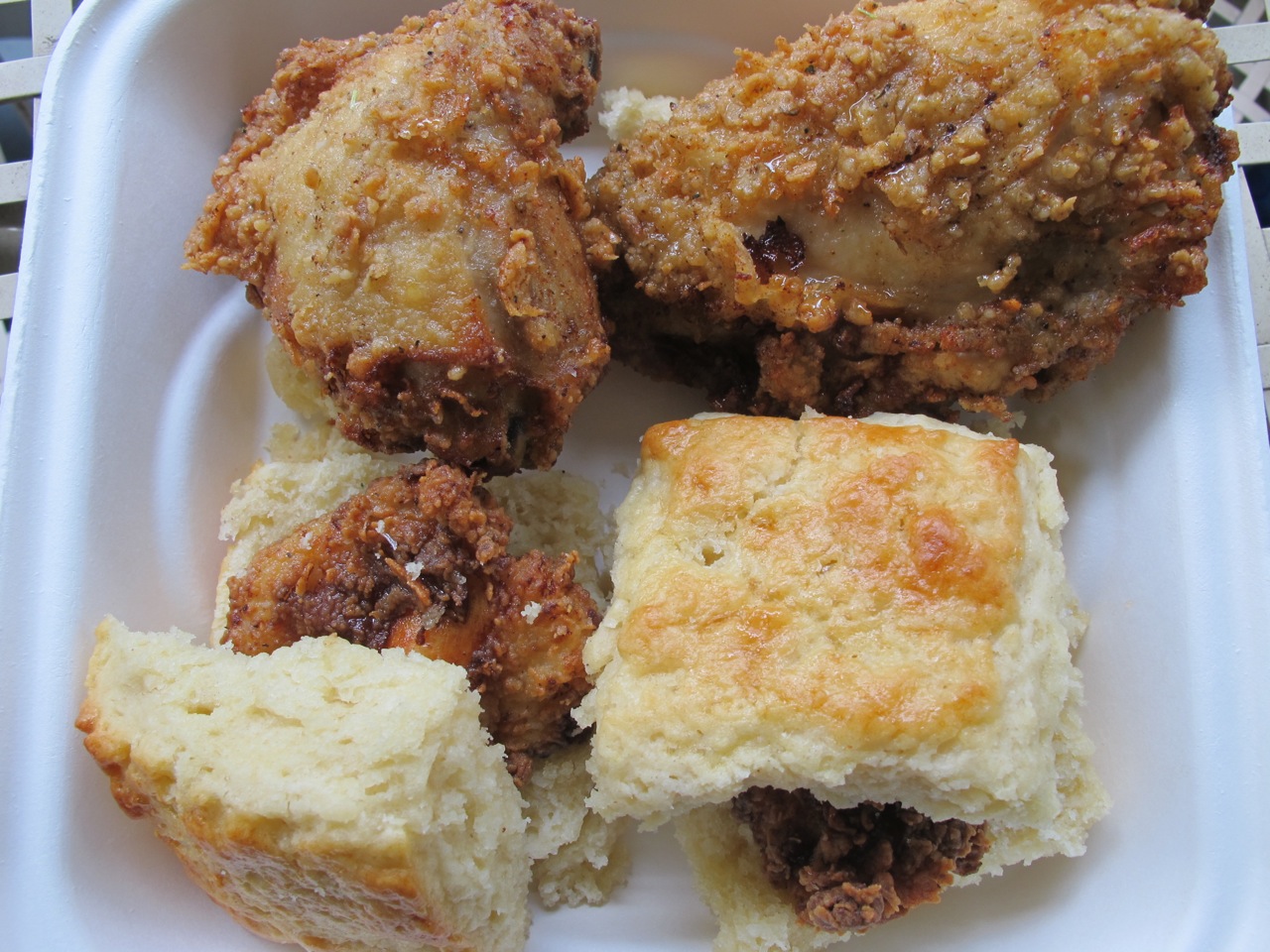 Finally this year I introduced the Beyond Breakfast series of posts. There are just too many good places that we love for lunch, dessert, dinner, drinks, and beyond, and I wanted to plug some of my favorite small businesses. Beyond Breakfast has allowed me to cover spots in NYC, as well as roasted chicken at Kauffman’s BBQ in eastern PA or fried scallops at Quality Seafood in North Carolina. It’s also a good way to share our constant cravings for al pastor tacos at Taqueria El Fogoncito or fried chicken and smashed potatoes at Mya’s Fried Chicken.

It’s been a fun year in eating and blogging. The breakfast book has done well, too, and we may be making plans for the next book in the series (!). I want to say a special thanks to everyone who follows the blog, supported the book, joined me for breakfast, and made this a fun and successful enterprise!

Here’s to a Happy New Year and lots of happy breakfasting in 2013!

From Nick & The Fam

Filed Under: Beyond, Breakfast
Tagged With: 2012, photos, year in breakfast