Photos: eating our way around the Outer Banks 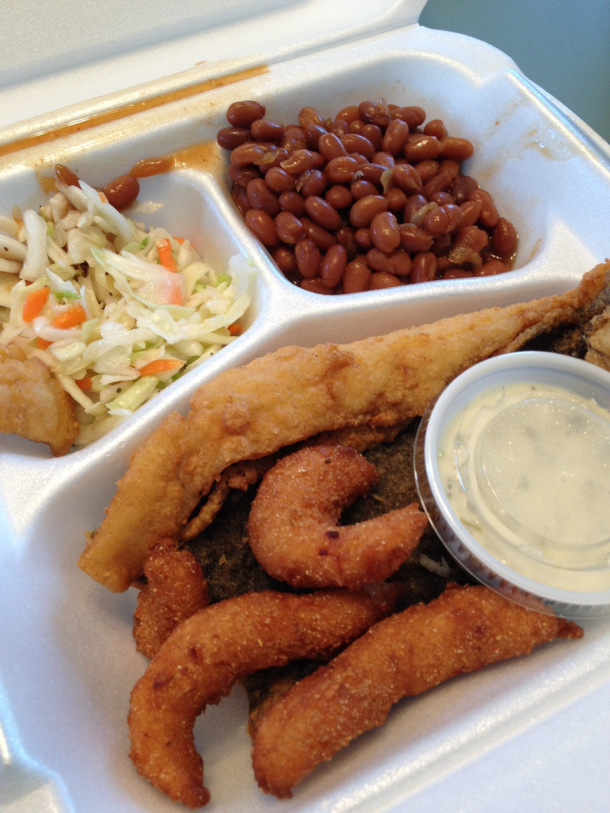 [ADDITION: If you want to read about the restaurants we’ve visited on OBX, look up North Carolina in my List of Reviews.]

Warning: gratuitous photos of seafood ahead.

Okay, you’ve been warned. Welcome to my brief culinary travelogue of our recent visit to the North Carolina Outer Banks. It’s an annual trip we make with our family, and over recent years it’s become an opportunity to try new restaurants and dishes that we don’t normally get in Ohio (or that we don’t get as fresh). Mainly I’m talking about seafood.

The picture up top is a basic platter of fried fish. During the summer months, a number of groups on the Outer Banks hold fish fries as fundraisers. In Avon the volunteer fire department holds one every Friday, so we pick up some meals to go. The firefighters gather out front of the building and fry up fresh fish (in this case Spanish mackerel) and serve it with hush puppies, cole slaw, baked beans, and tartar sauce. 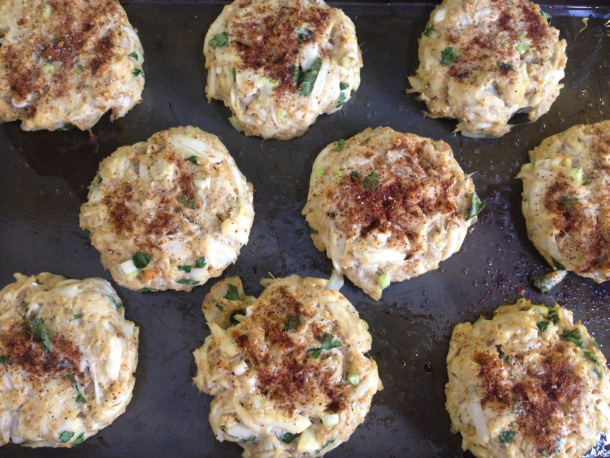 One of our family traditions is making crab cakes. We stop by one of the small seafood stores to pick up a few pounds of fresh crab; my mother-in-law has found a tried-and-true recipe for crab cakes, and we look forward to the meal every year. 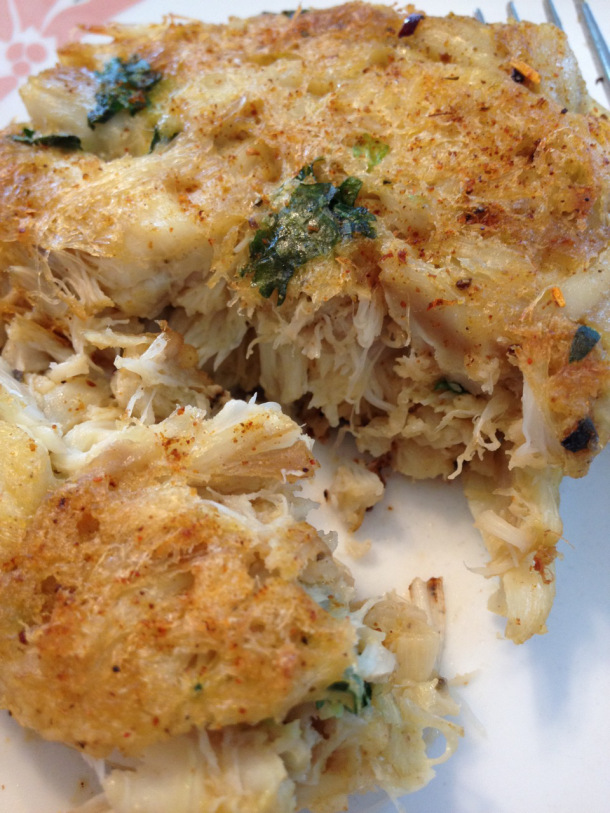 The nice thing about making your own crab cakes is that you control the amount of crab. Some restaurants over stuff their cakes with filler. But not so here. It’s pure crab cake heaven.

On a side note, we were saddened this year to discover the closure of one of our regular seafood stops, Daniel’s Crab House. Daniel’s was located in a ramshackle building on the side of the highway between Nags Head and Manteo. The business was family-run for over 50 years, so to suddenly see it closed was very sad indeed. I did a little digging and found that their building was damaged badly by Hurricane Irene in late 2011, so I’m guessing that contributed to the closure. There are very few places like Daniel’s on the Outer Banks now. 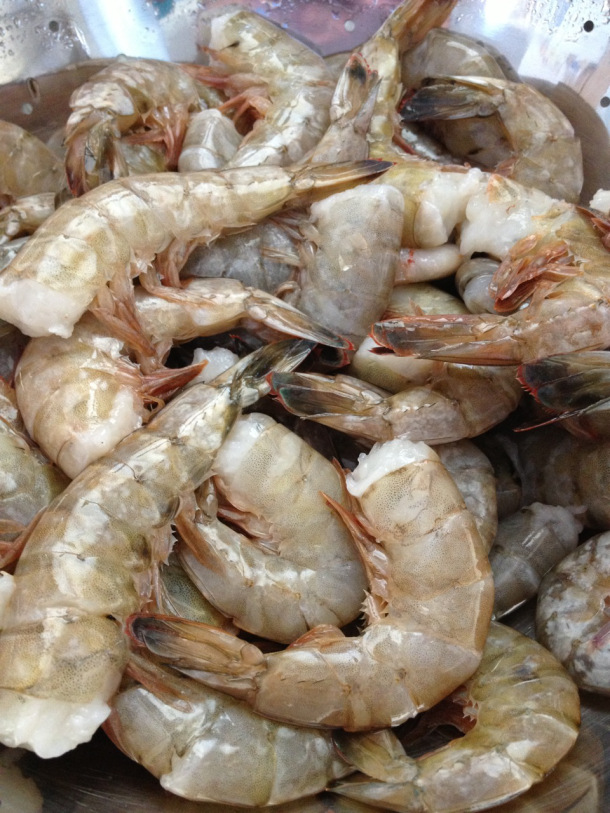 Despite Daniel’s closing, our seafood quest continued. We ate pounds and pounds of shrimp, too. They’re great when boiled and served with homemade cocktail sauce, or in a seafood linguini. Or keep reading for one of our family preparations… 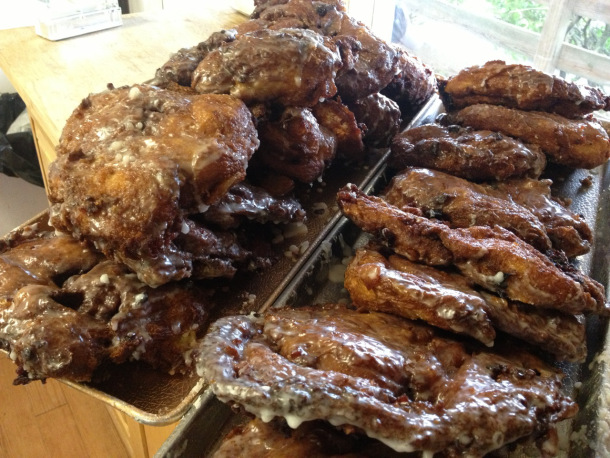 Our trip also includes one or two runs to the Orange Blossom Bakery for their famed apple uglies. The uglies are really just glorified apple fritters, but they’re giant, crispy on the outside, squishy on the inside, and heavily glazed. Long-time customers have learned to either cope with an extended wait in line or to place large orders the day before. Over the years, we’ve been frustrated by the seeming lack of preparation on the part of the crew, as if it’s a surprise that carloads of customers show up at 6:30 a.m. You’d think by now they would have perfected the art of cranking these out more quickly. They’d probably make more money and tick off fewer customers if they did. 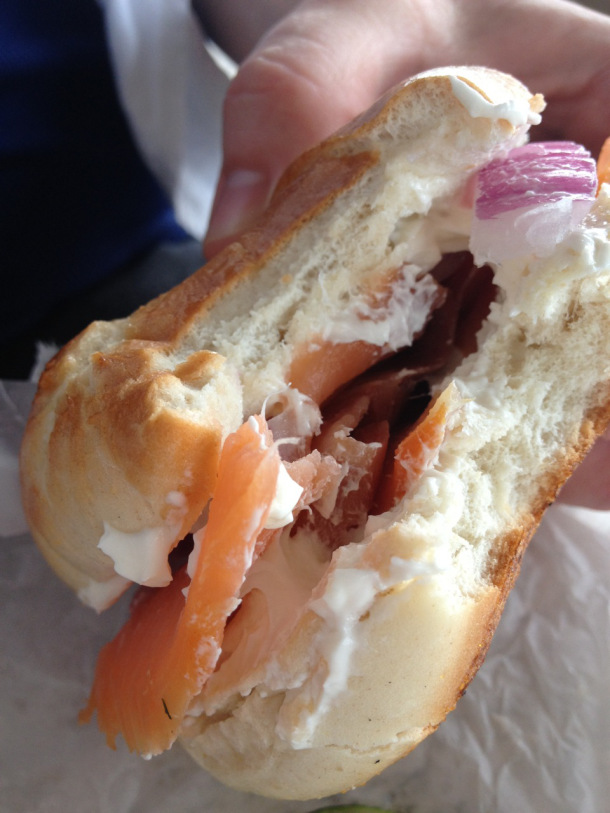 This time around we resigned ourselves to waiting in line. Fortunately, you can order a hot breakfast at Orange Blossom, too. While the Mrs. and I waited, she enjoyed a bagel with salmon and cream cheese. 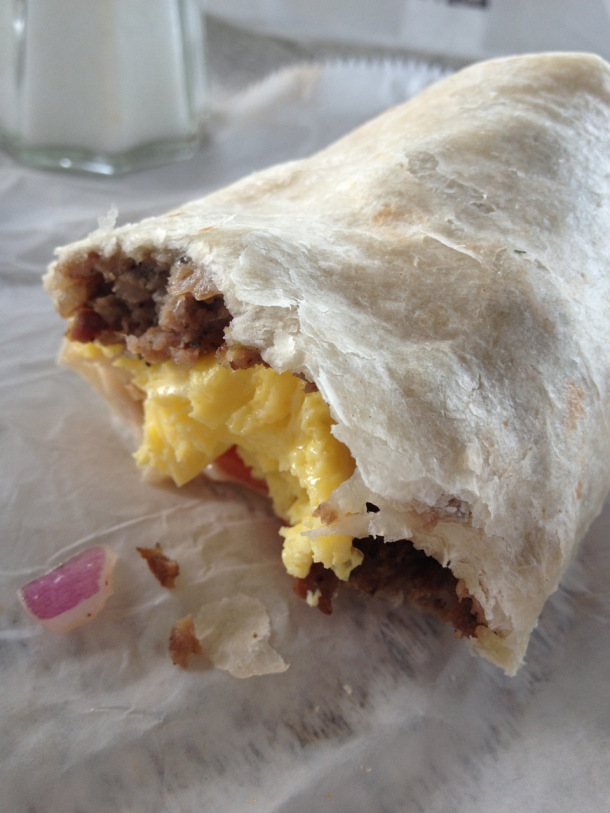 And I feasted on a basic but likeable breakfast burrito. 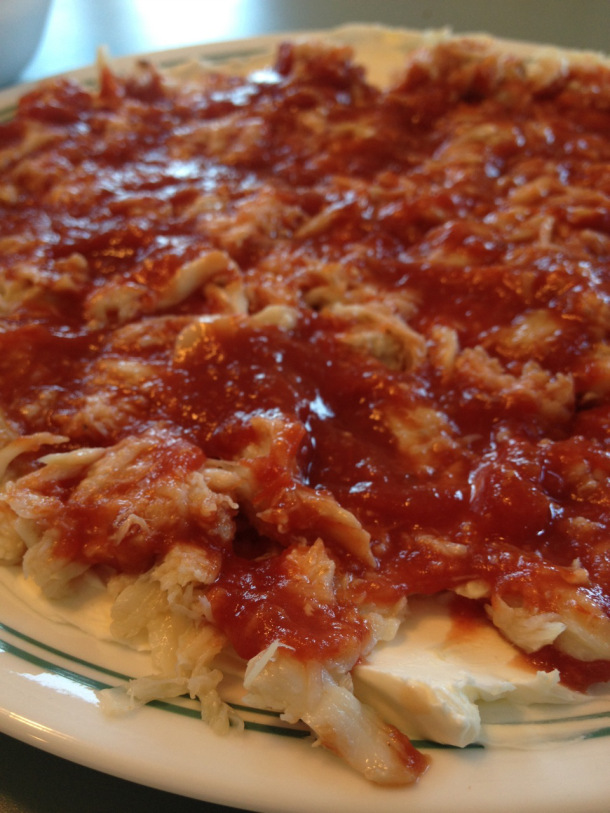 Aside from crab cakes, our favorite crab preparation is a simple dip of cream cheese, crab, and homemade cocktail sauce. My wife’s grandma rightfully doesn’t trust any store brand sauce, so she makes her own and it’s terrific. 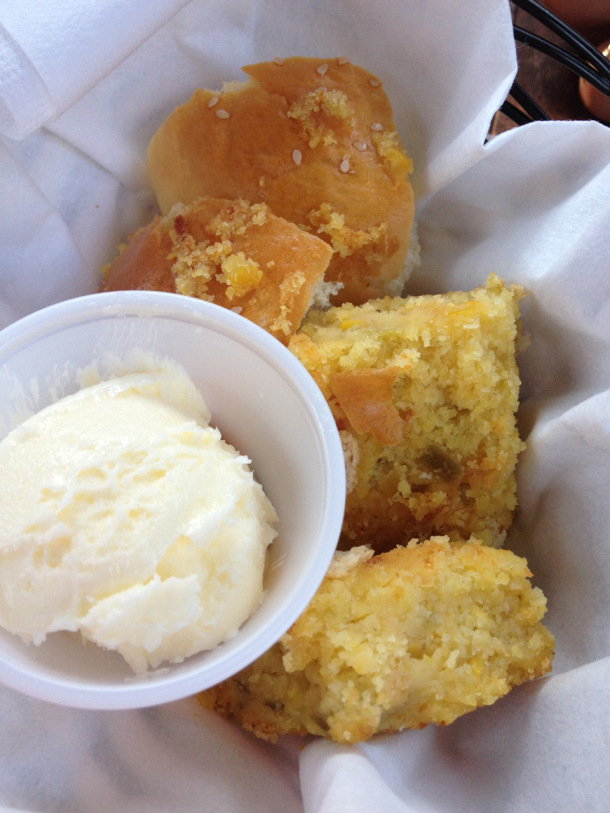 Mrs. Bfast w/Nick and I enjoyed an overnight getaway down to Ocracoke Island. Ocracoke is one of our favorite places to be; it feels like a little bit of our souls lives there. Being sans kids allowed us to explore the small village more thoroughly, and to enjoy some meals with actual adult conversation. For dinner we stopped by our favorite restaurant Dajio. The meal began with fresh rolls and dense, moist cornbread. 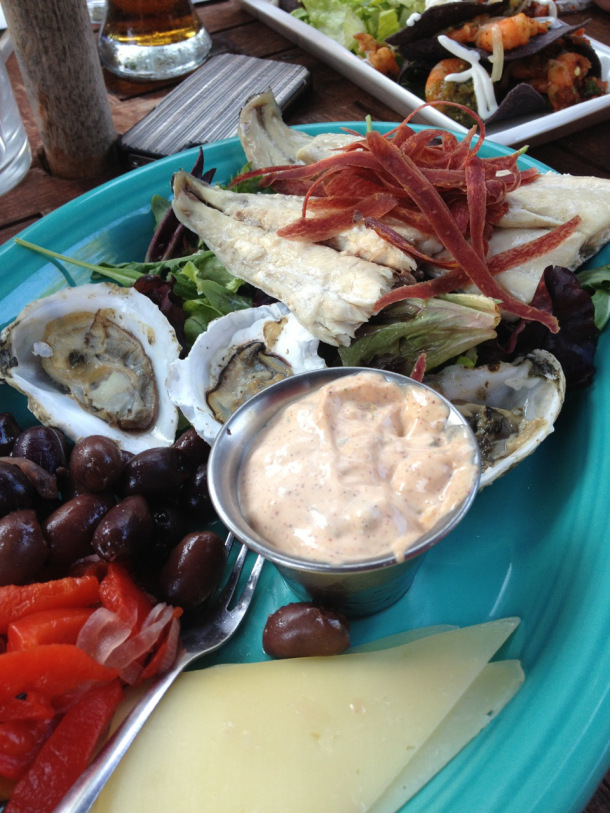 We split two plates between us. First was the local smoked fish platter. Oysters and fresh mackerel, both smoked in-house, are served with manchego, pickled peppers and onions, olives, and crostinis. The fish was amazingly fresh and smoked very delicately. 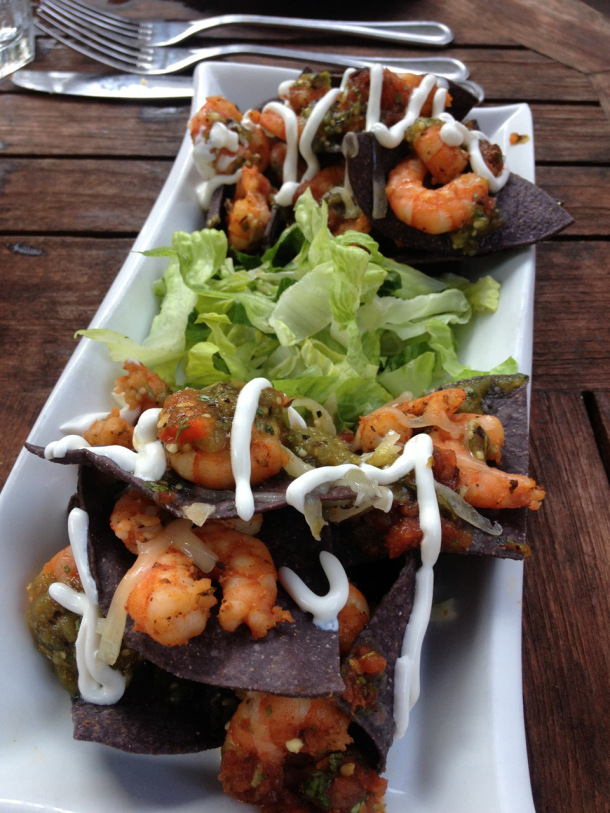 We also split the grilled shrimp and blue corn nachos. Also excellent and loaded with flavor. Overall, it was exciting to be there for dinner; usually we visit in the early hours for one of the best breakfasts on the islands. 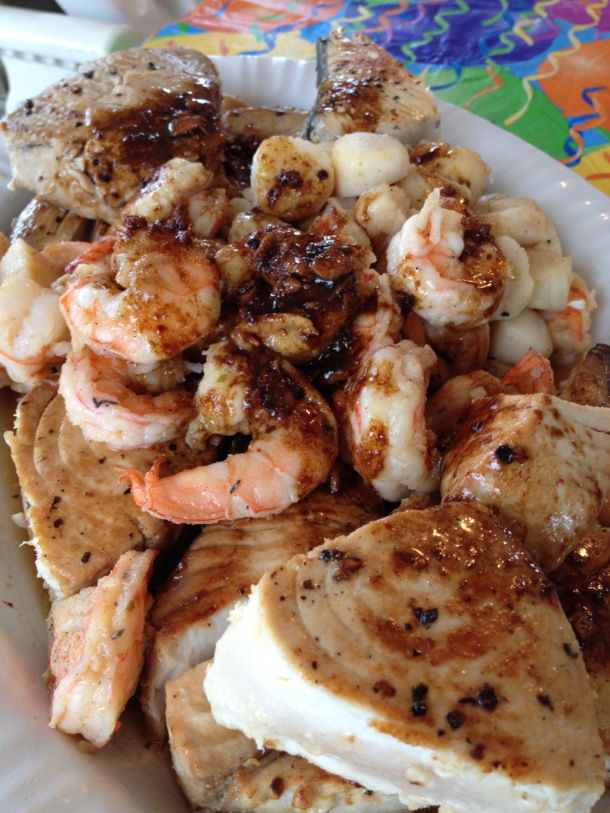 Back at the beach house we were cooking up a seafood storm. We typically take one night to make a massive bowl of seafood linguini. Here’s just the seafood, all pan seared and ready to go: shrimp, scallops, shark, and tuna. 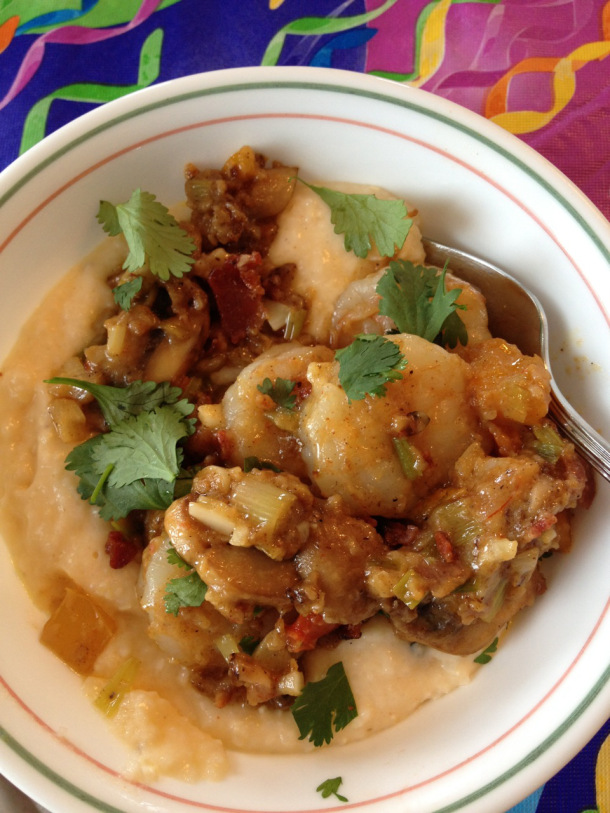 Oh, speaking of house favorites, here’s one of the best things you can do to shrimp: serve it over grits. Mrs. Bfast w/Nick and I made this dish (well, more so her), and really knocked it out of the park. Cheesy grits (cheddar and parmesan), bacon, vegetables sauteed in the bacon fat, and fresh shrimp that’s lightly floured, seasoned, and pan fried. Garnished with cilantro. A small bowl like this is incredibly rich and filling. 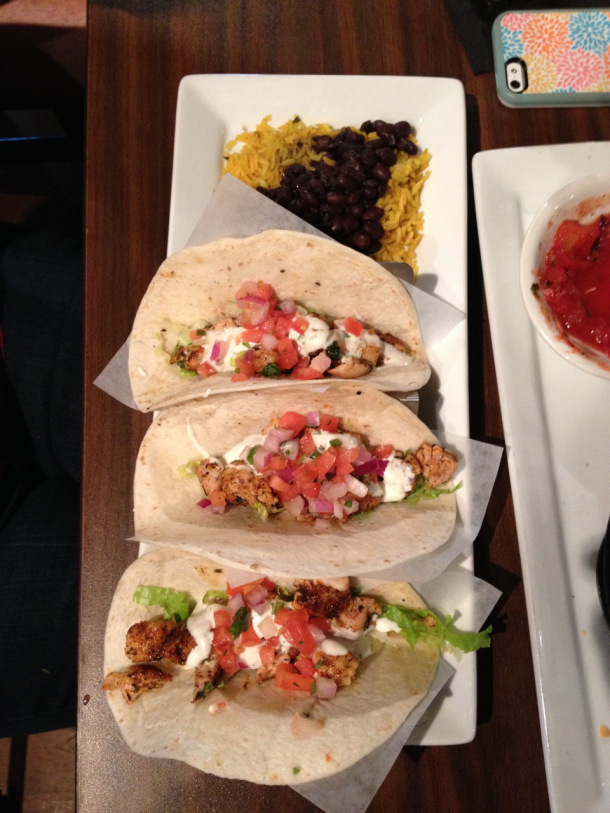 On an excursion north to Manteo, we sought out a lunch spot called Ortega’z Southwestern Grill, smack dab in the heart of historic Manteo. Ortega’z was on our map because of a recent feature on Diners, Drive-Ins, & Dives. They were worth the attention, from their solid fish tacos (above)… 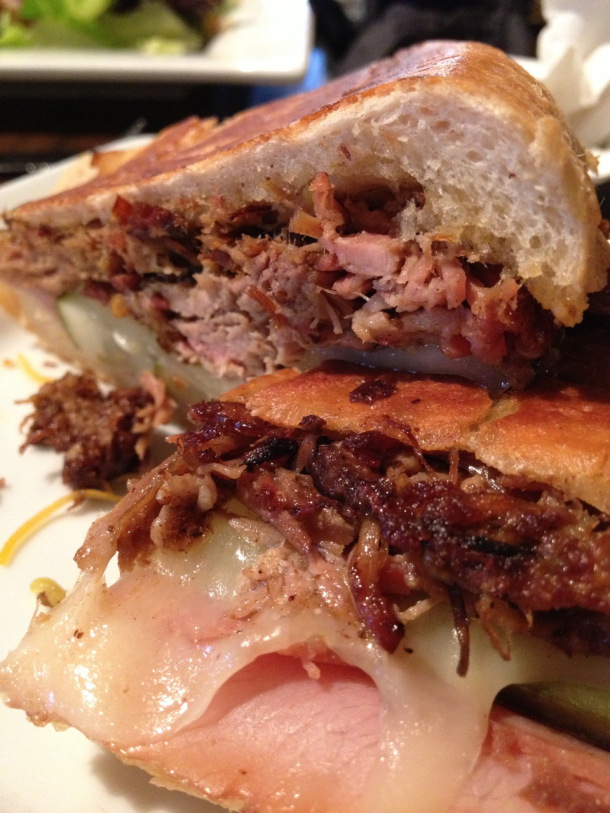 …to the dense and delicious Cuban sandwich… 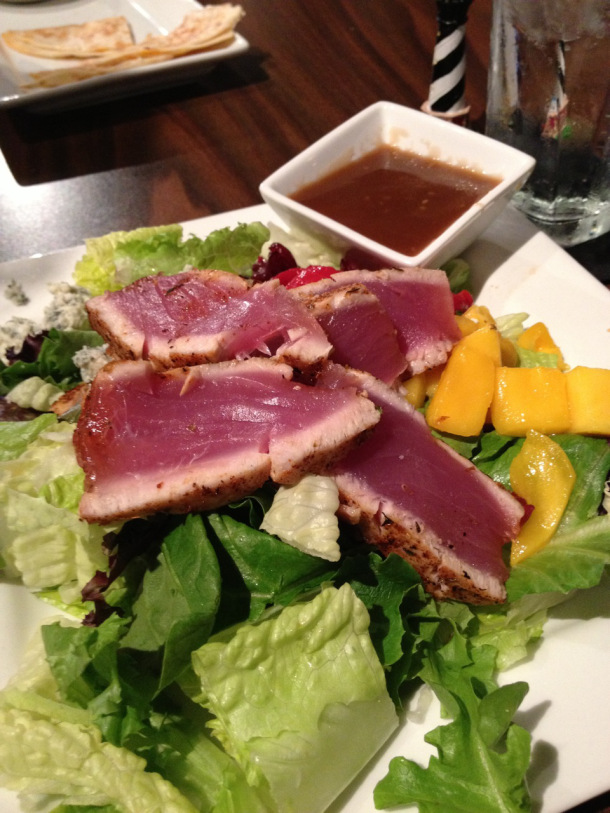 …to the cobb salad with fresh tuna. When asked how she wanted the tuna cooked, my wife replied, “Barely.” That’s the only way to cook tuna, if you’re going to cook it at all. 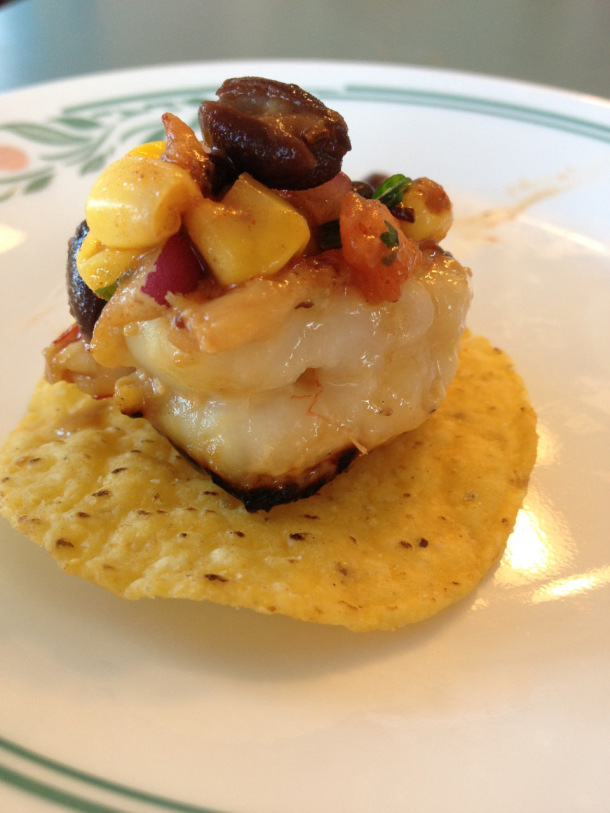 Finally, our last stop. We jokingly created our own amuse bouche out of a tortilla chip, fried shrimp, and fresh pico de gallo.

Looking back over these pictures, I’m amazed I didn’t gain twenty pounds on vacation. Believe it or not, we did do other things than just eat. The fun thing about the Outer Banks is that you can spend a lot of time running around on the beach, swimming, flying kites, and building sandcastles, so you work up a genuine appetite for the local fare.