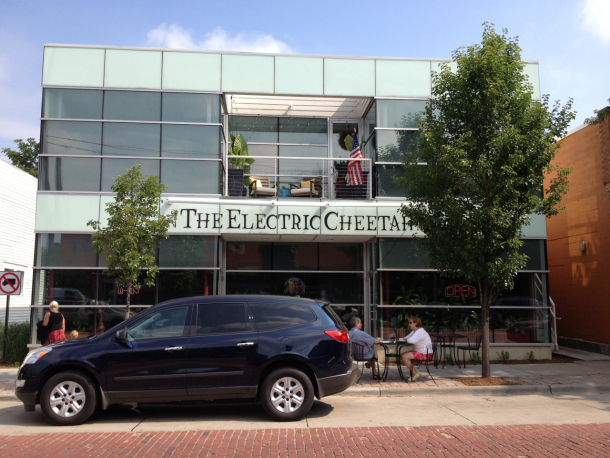 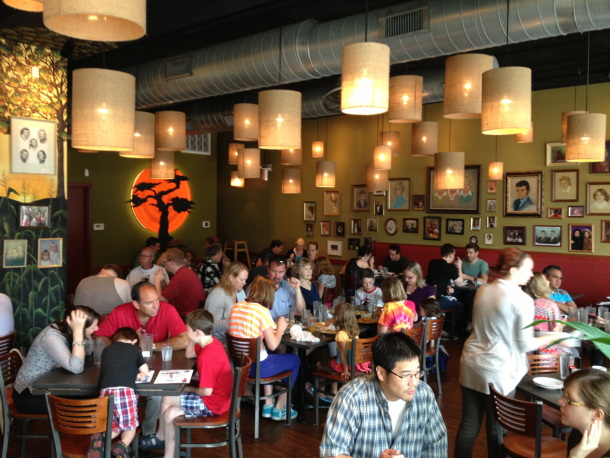 Electric Cheetah is another one of those hip restaurants that has opened since we moved away from Grand Rapids. It’s in the center of a growing district along Wealthy Street, which runs east-to-west a little ways south of downtown. Much of Wealthy Street’s brick streets have been rebuilt, and the neighborhood identity has lent itself to a growing number of restaurants, stores, a theatre, coffee shops (like Rowster American Coffee), bakeries, and more. Electric Cheetah fits well in the middle of all this: kitschy, trendy, fun, a little goofy, and a big draw. 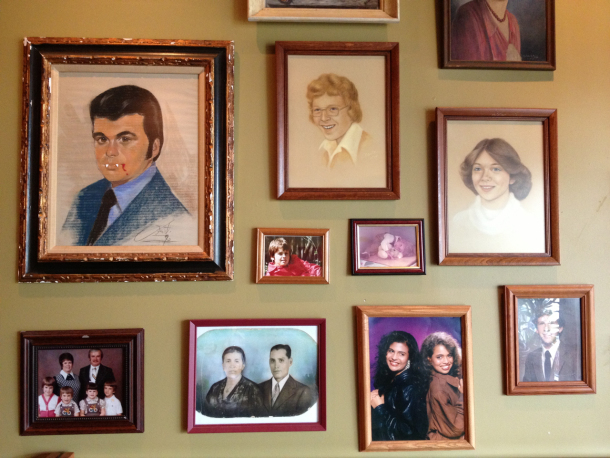 Case in point: re-purposed family portraits are hung on the walls. Note the big one on the left. 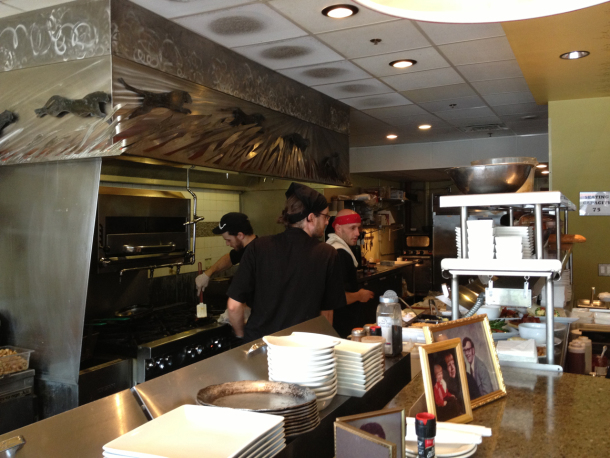 The restaurant is mainly one giant room with an open kitchen. Floor-to-ceiling windows let in a lot of light. There are a handful of cafe tables out front, too. 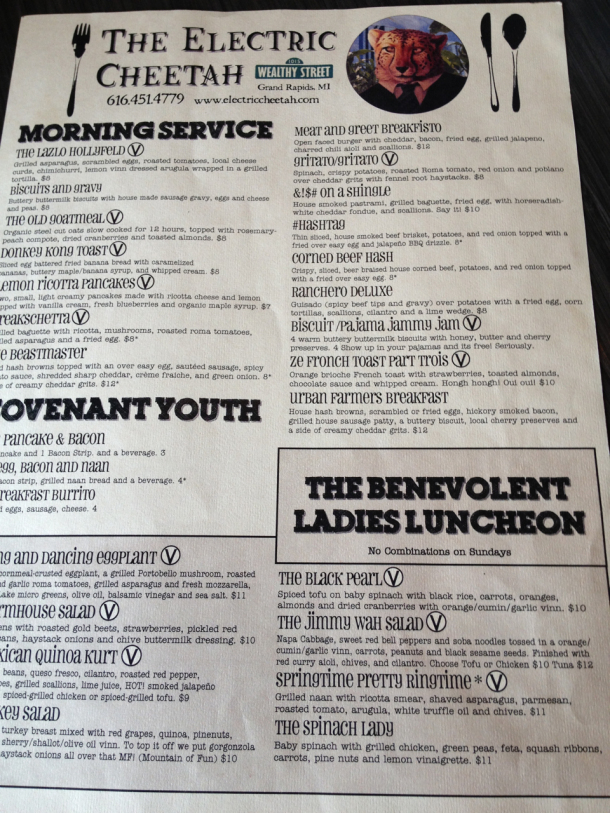 Points to them for having an eclectic and creative menu, too. All of the brunch sections are given churchy names like Morning Service, Covenant Youth (for the kids’ menu), Benevolent Ladies Luncheon (for salads, pasta, and entrees), and Church Potluck Supper (for mac & cheese dishes). The individual plate names are fun, too: #hashtag for brisket & hash, Donkey Kong toast for banana bread French toast, or breakschetta for a breakfast bruscetta. Notice that there are a lot of vegan options, too. 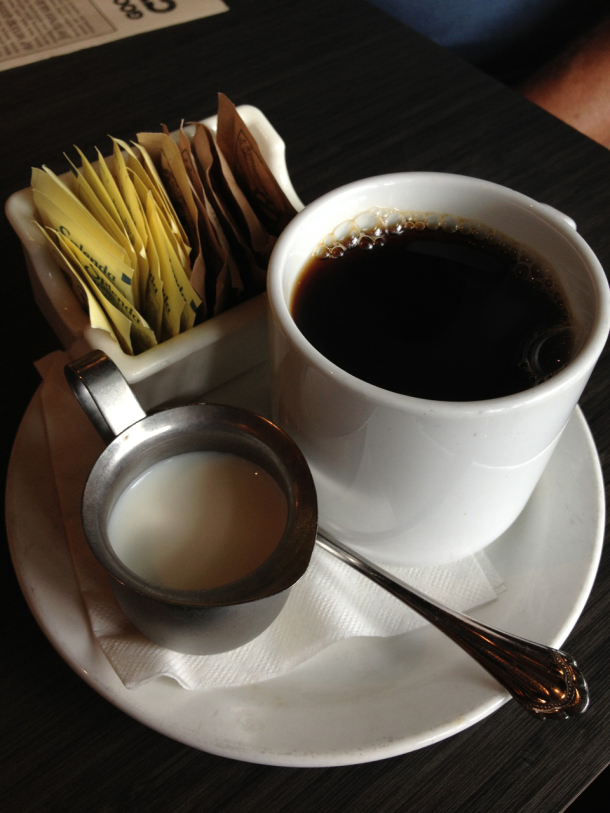 Coffee is a standard order for us. It arrived in our preferred presentation: with cold cream. It’s good coffee, although I didn’t catch the roaster. 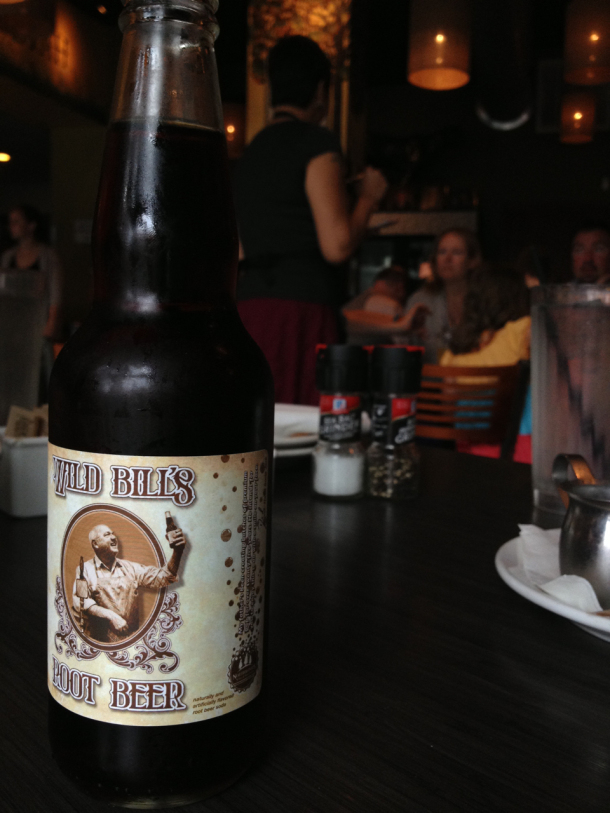 One of Electric Cheetah’s claims to fame is their root beer menu, which is certainly the largest I’ve ever seen. It’s an entirely separate page from the regular menu and it spans over 40 bottled selections plus one on tap. I’ve never thought to pair brunch with root beer, but I took advantage of their menu and tried a sweet Michigan brew from Wild Bill’s. 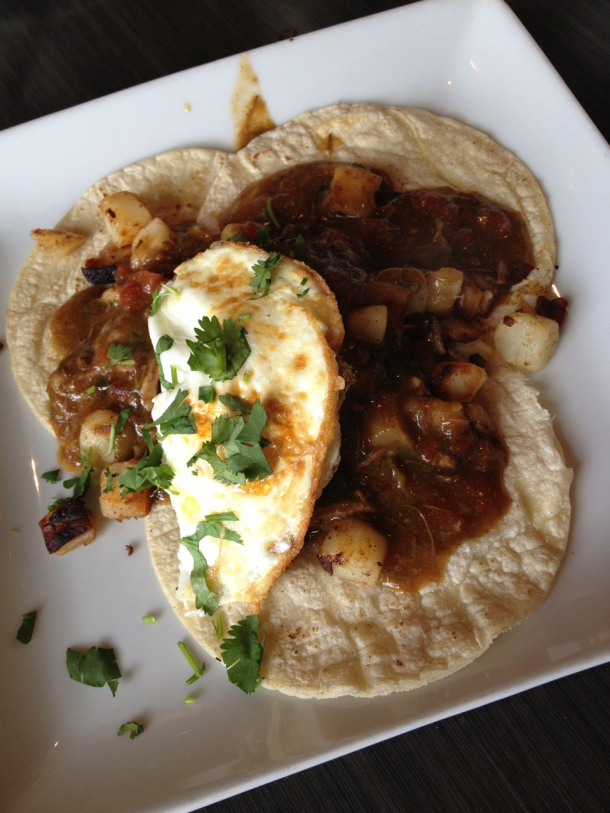 The brunch menu is a little pricier than a straight-up diner breakfast, but the creative dishes and flavorful combinations make up for it. I wanted something savory, and a huevos rancheros or chilaquiles always draws my attention, so I ordered the ranchero deluxe: open-faced corn tortillas topped with potatoes, eggs, and beef tips with gravy. Very rich with the gravy, but nicely seasoned. A really solid brunch dish. 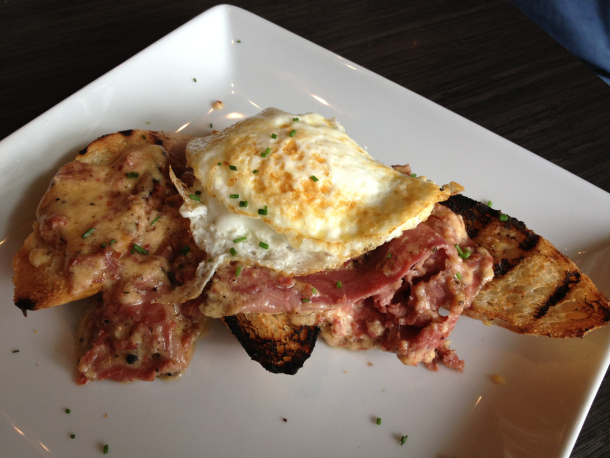 Mrs. Bfast w/Nick ordered the S&!t on a Shingle. We love a good SOS, and liked this creative take on it. Instead of just chipped beef in gravy on toast, they top grilled baguettes with house-made corned beef, a “cheddar fondue,” and a fried egg. Again, a rich and flavorful dish – I especially liked the corned beef and cheese mixture (how could you not?), and almost preferred that to the huevos. 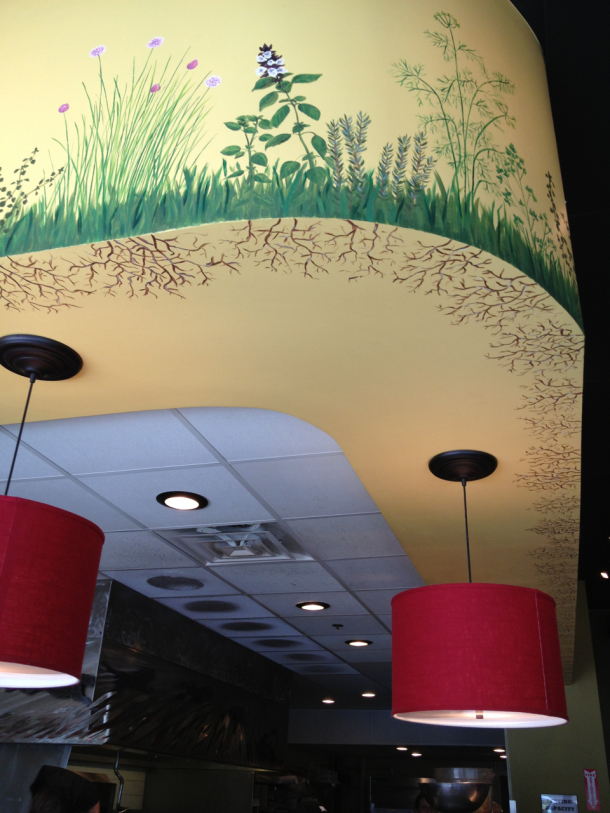 Electric Cheetah could be called Eclectic Cheetah (I’m not the first one to make this joke, right?). The brunch menu covers a lot of ground without feeling stretched. The decor includes the old family portraits, crazy ceiling lamps, plus a smattering of other styles of art. I liked this detail above the kitchen, of the plants and their roots painted on the bulkhead. 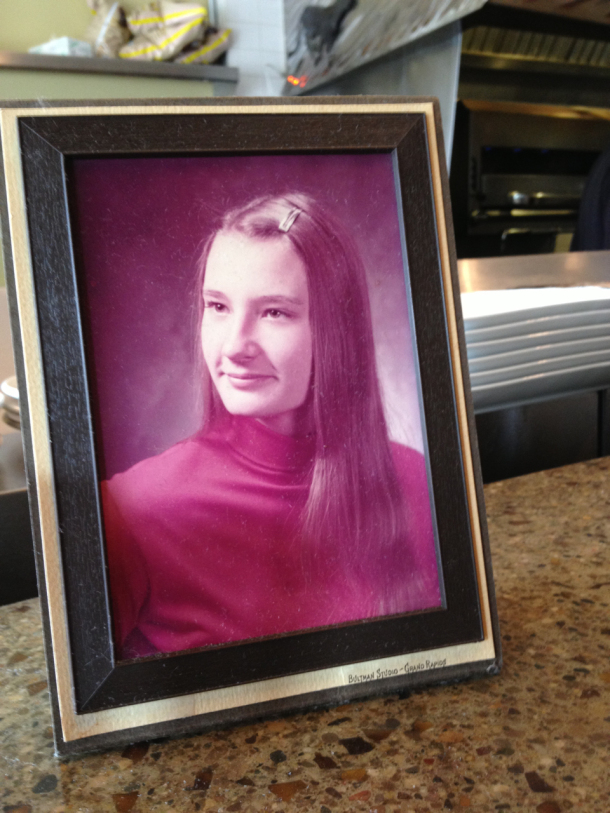 Even if you sit at the counter, you still get to eye the portraits. 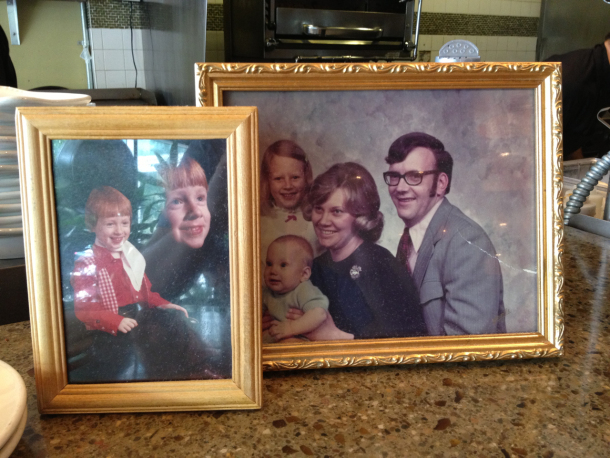 We arrived about ten minutes prior to Electric Cheetah’s opening for brunch, and already there was a small crowd out front. By the time we left the place was full, and I can see why. The atmosphere and food is fun and funky without being too off-the-wall, and our server was very friendly and helpful, although the food took a little longer to arrive than expected. But that’s brunch for you: it’s supposed to be relaxed and casual, starting a little later in the morning and allowing you to ease into the day. And if Electric Cheetah is a sign of the neighborhood’s continued revitalization, I’d say they’re right on track.