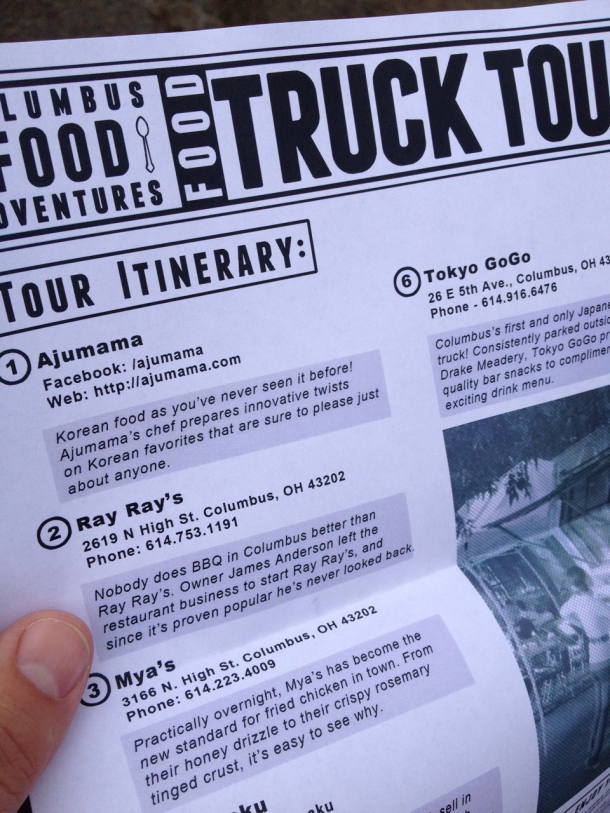 This past weekend Mrs. Bfast w/Nick and I had the pleasure of taking Columbus Food Adventures‘ newest tour, their food truck tour. The tour was established out of their expertise in writing the blog Street Eats Columbus, where they document Columbus’ growing food truck scene. 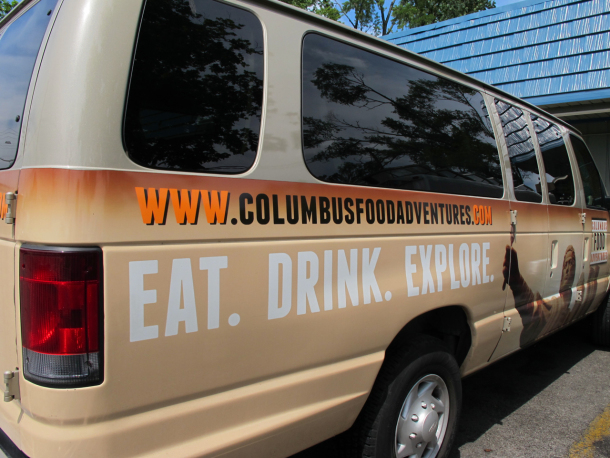 The tour takes you to five of Columbus’ more active and innovative food trucks, going from Grandview, to Clintonville, to the northeast side, and back down to Short North. Each stop gives you chance to learn the background of the truck and their specialty, sample the food, and meet with the owners. 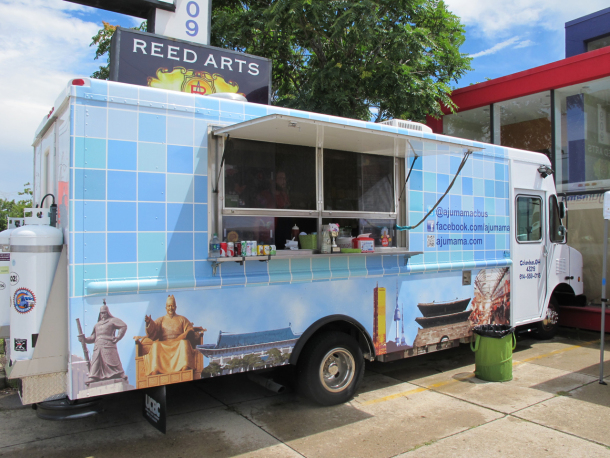 The first stop was Ajumama, a Korean street food truck that’s been open a little over a year. The truck was set up in front of the new location of Zauber Brewery on Fifth Avenue. Zauber is in the process of renovating the space, but they’ve already begun parking food trucks out front. 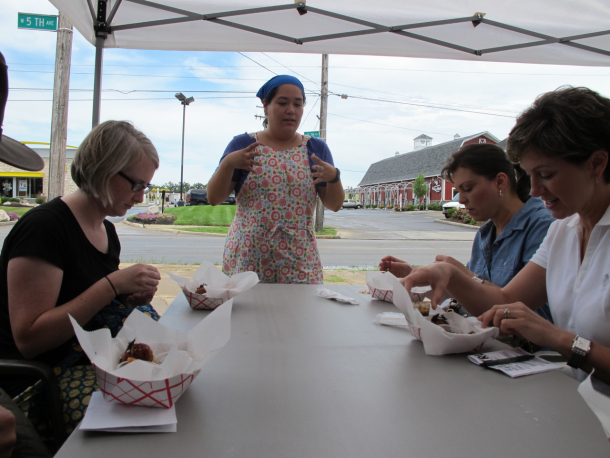 Owner Laura Lee took some time to explain Korean street food and its influences to us. Laura and her truck have been favorites of the food truck scene since she opened. She told us about the funny loop of influences, with American cuisine having an effect on Korean food, which is now being brought to the States. 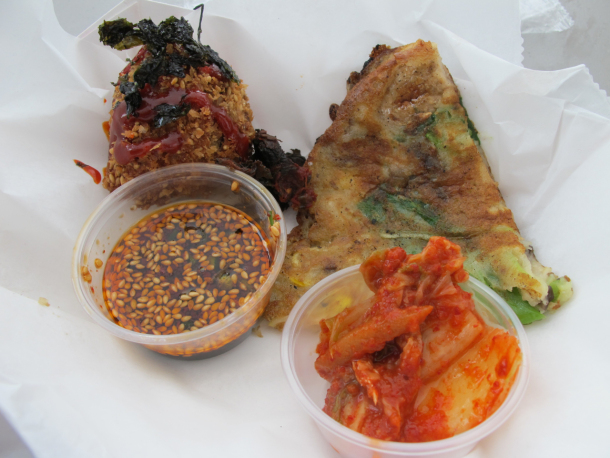 Meanwhile, we got to sample what she does best. The upper right is pajeon, a thin pancake that Laura fills with vegetables. The bottom right is some of Laura’s homemade kimchi, all tart and savory and salty at the same time. 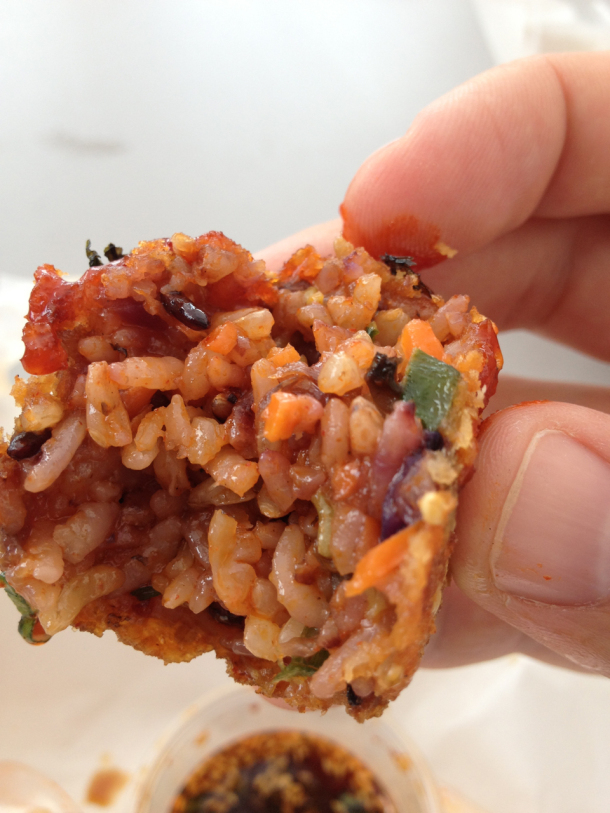 The round balls are Laura’s adaptation of the Korean dish bibimbap into hand-held street food, called bibimballs. Bibimbap is usually served in a big bowl with rice, vegetables, seasonings, and egg or meat. Laura’s put it all together in this massively flavorful fried ball. 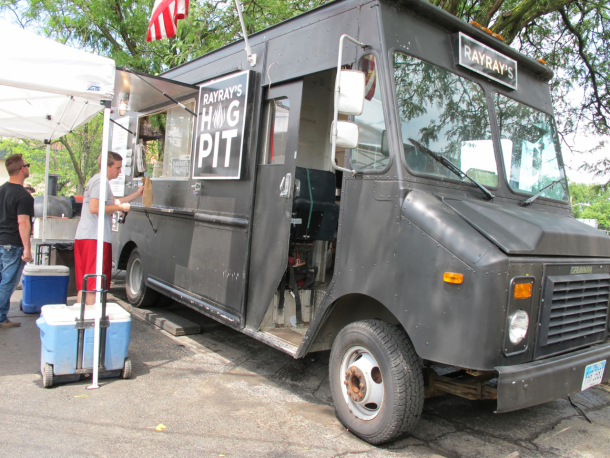 The second stop brought us up to Clintonville/Old North to the home of Columbus’ best BBQ (in my opinion, at least): Ray Ray’s Hog Pit. Ray Ray’s is camped out on weekends next to Ace of Cups bar; like many of the city’s regular food trucks, they’ve formed a symbiotic relationship with their hosts. Ace of Cups provides regular seating and bar service for the food truck, while the truck takes care of bar snacks. A couple of us complemented our BBQ with drinks from the bar. 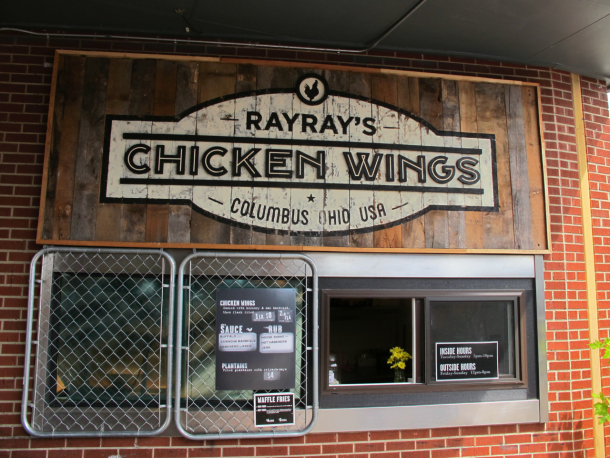 Ray Ray’s just recently added a wing shack, with a window to the seating area out back, and one inside for the bar. 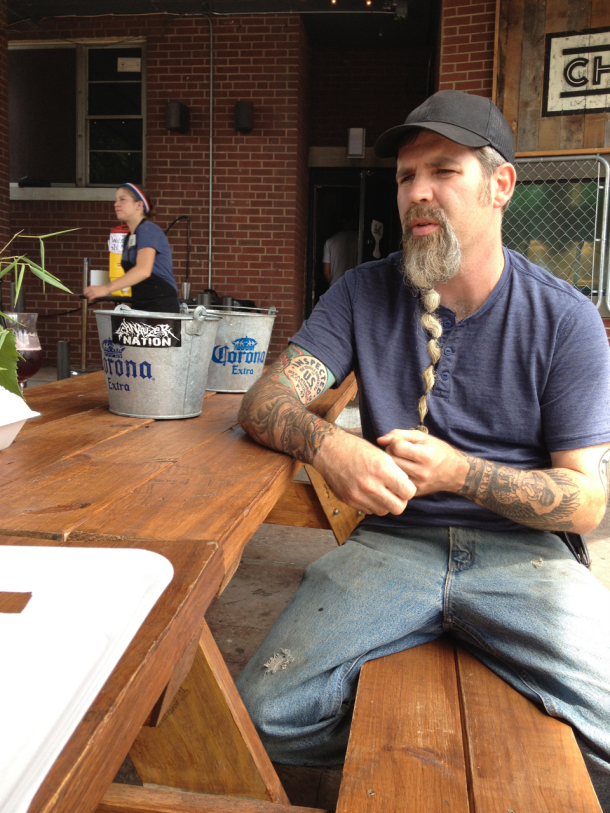 At this stop we met James Anderson, owner of Ray Ray’s and really the godfather of barbecue in Columbus. He discussed his process of smoking brisket, ribs, and wings, going into detail about temperatures, times, types of wood he uses, how he sources his meat, and more.

Sampling include ribs, wings, brisket, plus sweet and hot sauces. Ray Ray’s brisket is my favorite of their offerings; just look at that incredible smoke ring! 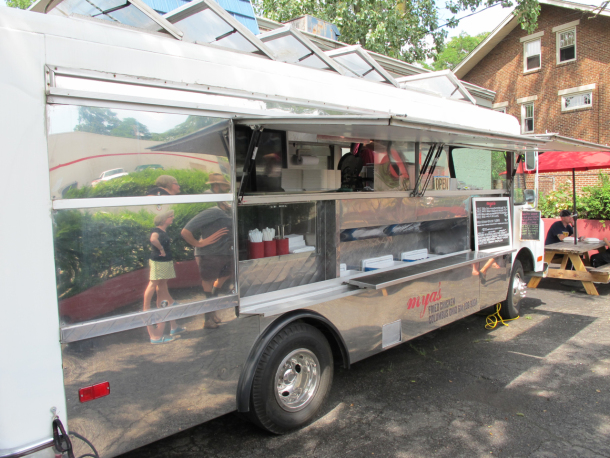 Our third stop was just up the road at Mya’s Fried Chicken. Mya’s is parked in the spot formerly inhabited by Ray Ray’s (James at Ray Ray’s said the two trucks regularly trade food). 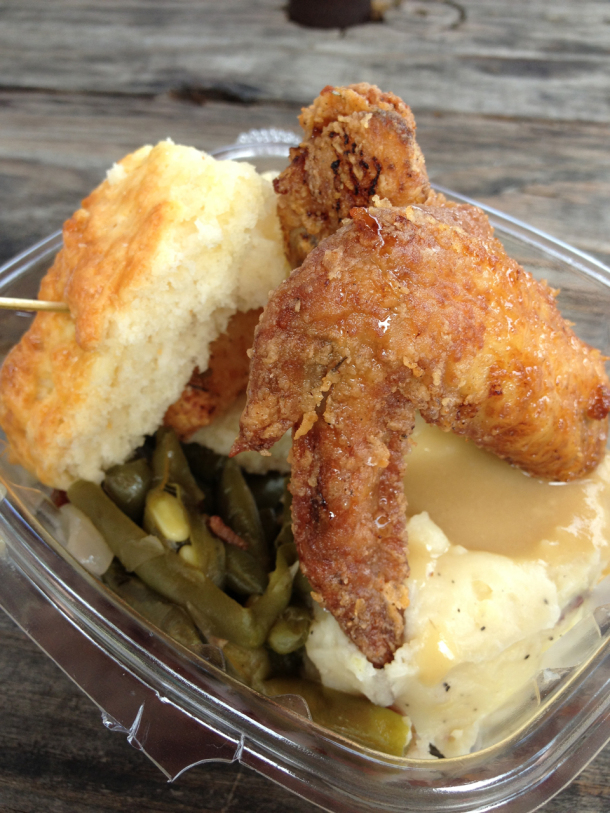 Clintonville is lucky when it comes to mobile food. If Ray Ray’s is the best BBQ, Mya’s is the best fried chicken. The generous sample here include a wing, a boneless breast on a biscuit, some green beans, and mashed potatoes with pan gravy. 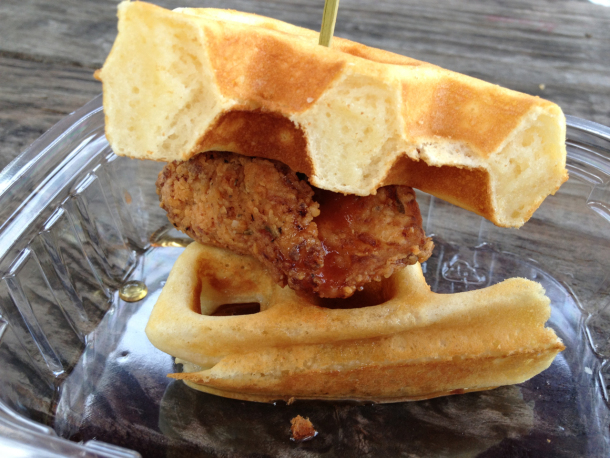 After owner Mark Tolentino elaborated his frying technique (his chicken is twice-fried, giving it a better crisp and a deeper color), he brought us a sample of their weekly special: chicken and waffles. They serve it one weekend a month, drizzling the chicken with syrup and hot sauce. 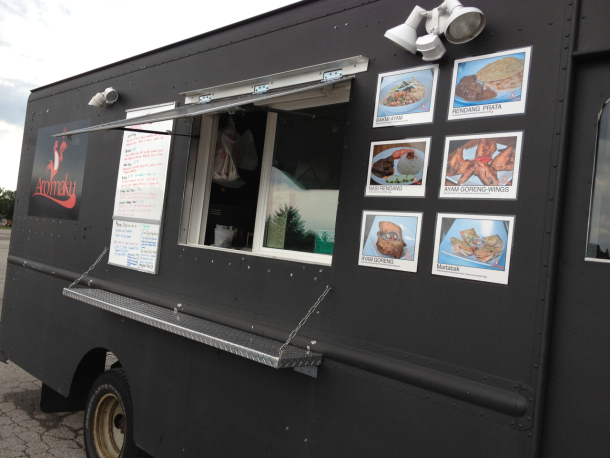 Our fourth stop was further up north off Route 161 at Aromaku, a newer truck serving Indonesian fare. Our guide Bethia (who runs Food Adventures with her husband Andy) pointed out that Aromaku is also one of the ONLY places to get Indonesian food in Columbus. 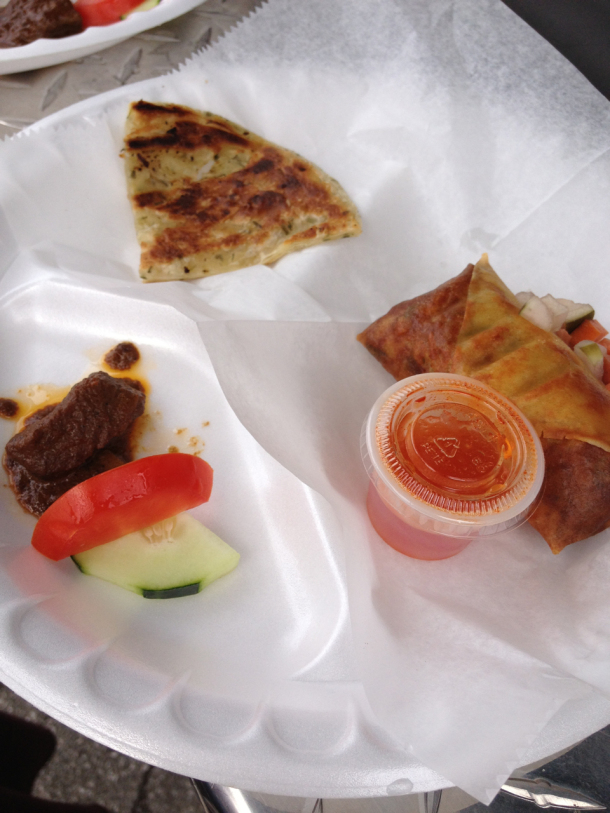 Aromaku owner Hendri explained some of the facets of Indonesian food, and gave us a sampling that included rendang (lower left), a very tender and rich beef stew; prata (upper left), a savory fried flatbread that’s often served with the rendeng; and martabak, a fried roll filled with scrambled egg, beef, and onions, and served with a side of pickled vegetables. 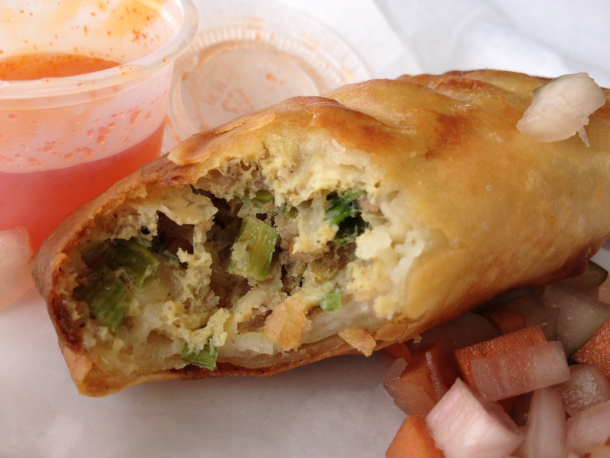 Here’s a close-up of the martabak. It was crisp and very well seasoned. The Aromaku truck was new to us, and this taste, plus the chance to chat with Hendri, has me excited to try them again. 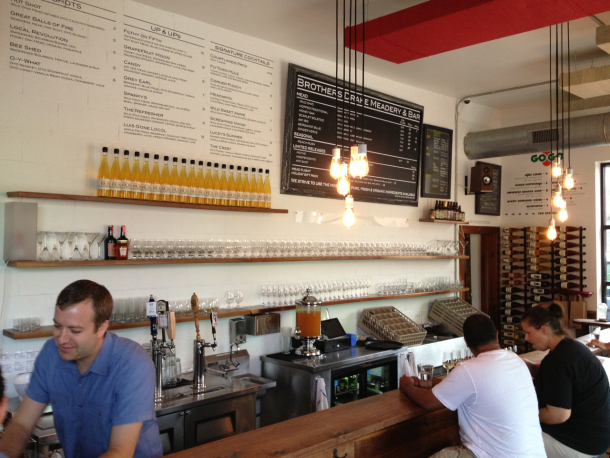 The final step of the tour took us to Brothers Drake Meadery in Short North. Brothers Drake took their mead production space and turned it into a comfortable bar and music venue, serving their meads, mixed drinks, draft beer, and more. 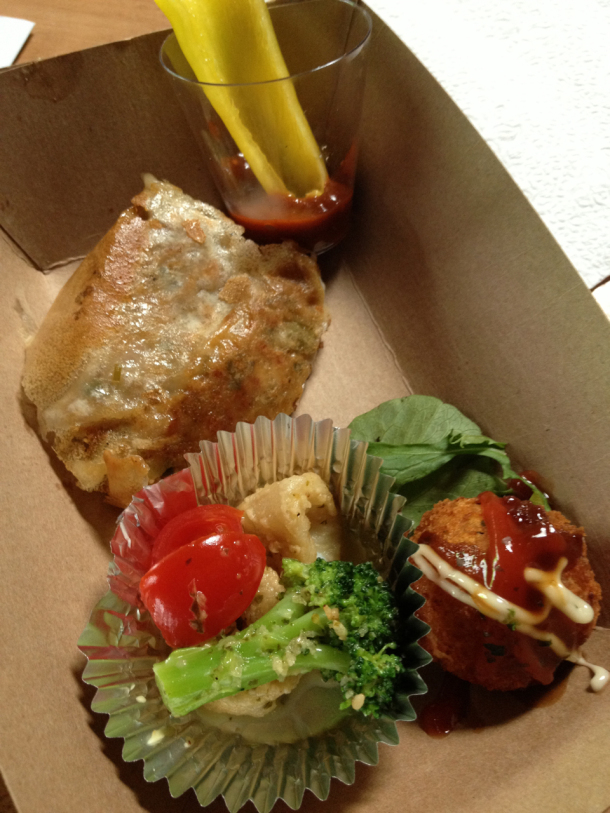 Parked out front of Brothers Drake is the Tokyo Go Go truck, which makes up for Bros Drake’s lack of kitchen space, and offers lighter fare to match their mead. We sampled a piece of fried calamari with vegetables, a pork dumpling, a potato croquette, plus a taste of some of their sauces. It was a relaxed and fitting end to the tour.

We loved the tour. Yes, you can find these trucks on your own. You can follow them on Facebook, Twitter, or through sites like the Ohio Food Truck Finder. But one of the nice things about the tour – in addition to the knowledgeable guides and the delicious food – is the chance to meet the owners. More often than not, the truck’s owners are there and cooking your food, but you don’t always get the opportunity to meet them and ask them questions. The tour is timed to visit the trucks outside of their busiest periods, so the owners have more time to tell you what they do best. The food truck tours run two Saturdays a month in the late afternoon; check out the tour schedule here.

If you want to learn more about Columbus Food Adventures and their tours: