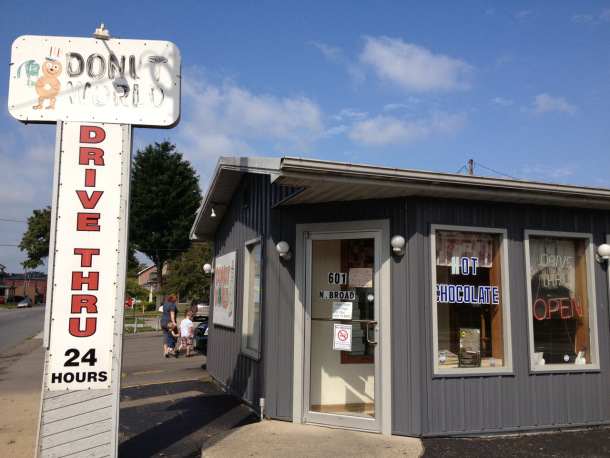 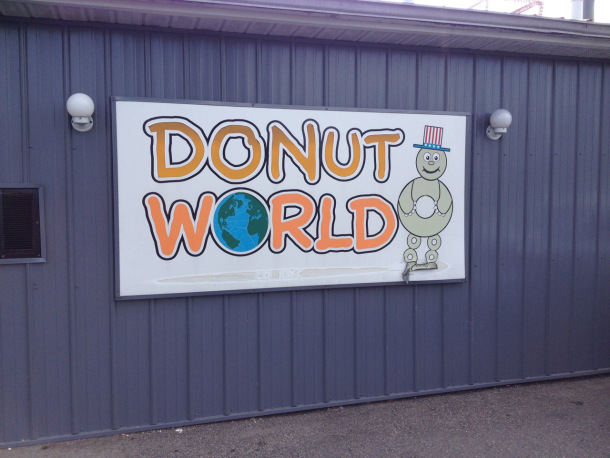 The first sign that Donut World is the right spot for donuts: we almost drove past it. This is important to note, especially when it comes to donut places. If it’s got a huge sign out front, and a giant parking lot, and everything is sparkly clean, you’re not in the right place for donuts. If it looks like a tiny wooden shack with a faded sign and mismatched lettering in the windows, chances are you’ve hit the jackpot. 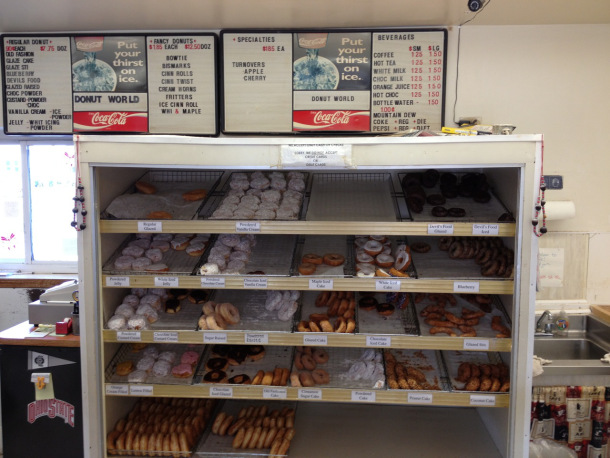 Donut World is a small corner building – almost a shack – in “downtown” Lancaster. If you’re heading to Hocking Hills from Columbus, you can re-route yourself with only the slightest inconvenience through Lancaster to stop at Donut World. You don’t even have to get out of your car; just pull up to the drive-through window to pick up a box of donuts. 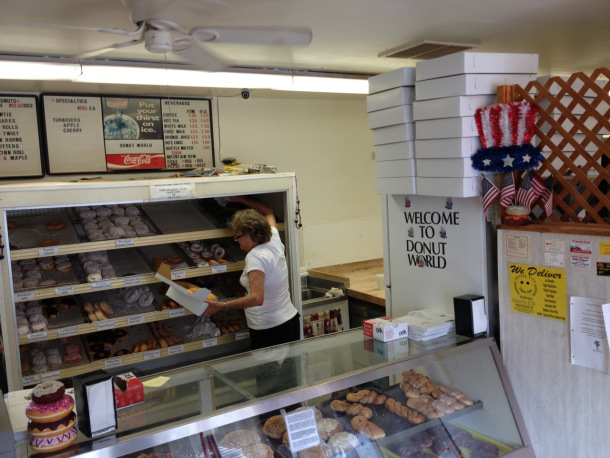 If you choose to step out of your car and into the building, you’ll find that the customer area only gets a sliver of the square footage. The rest of the space includes the production area and a counter facing racks of delicious, delicious donuts. 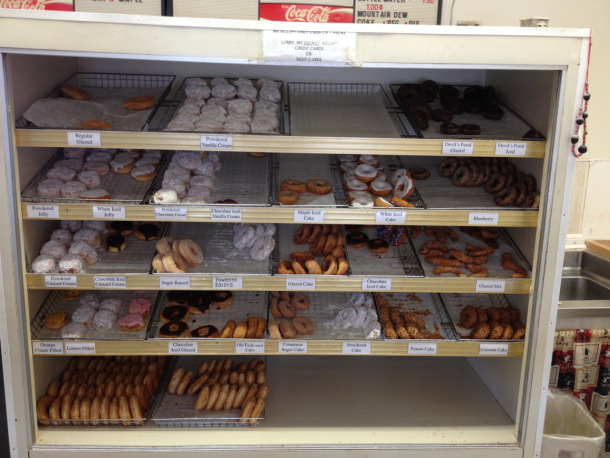 Donut World’s selection is pretty wide, from cake donuts glazed and coated every which way, to yeast-raised donuts, fruit-flavored, and specialties like apple fritters, Bismarks, bowties, cinnamon twists, and rolls. In short, enough choices to satisfy your donut preferences. 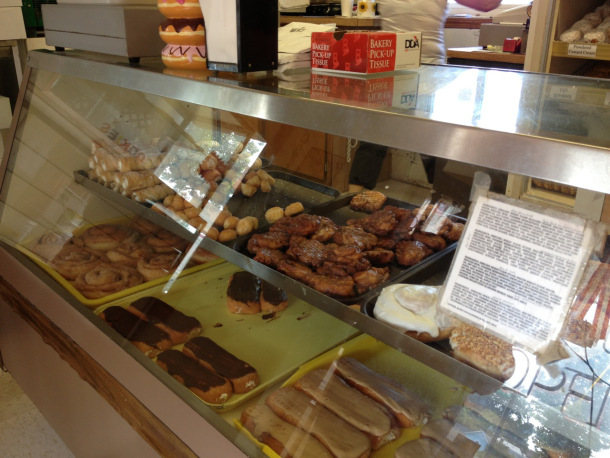 Donut World is a classic example of those old-school donut shops, with lettered menu boards, signs taped up all over, and big yellow trays for the donuts. They’ve been running things the same way for so long, and there’s really no reason for them to change. 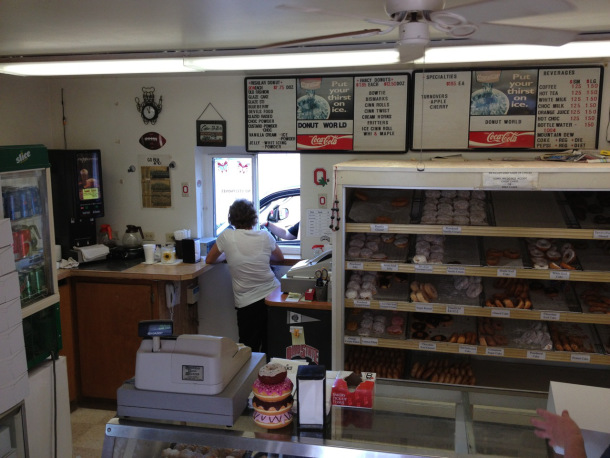 Part of that old school-ness is the woman behind the counter, who has clearly been working in the shop for years and years. She has no reason to change either. To some customers, her attitude might come off as abrupt or even rude, but to me it just shows that she knows what she’s doing, she knows what she’s selling, and she’s been asked every possible question by every possible customer. 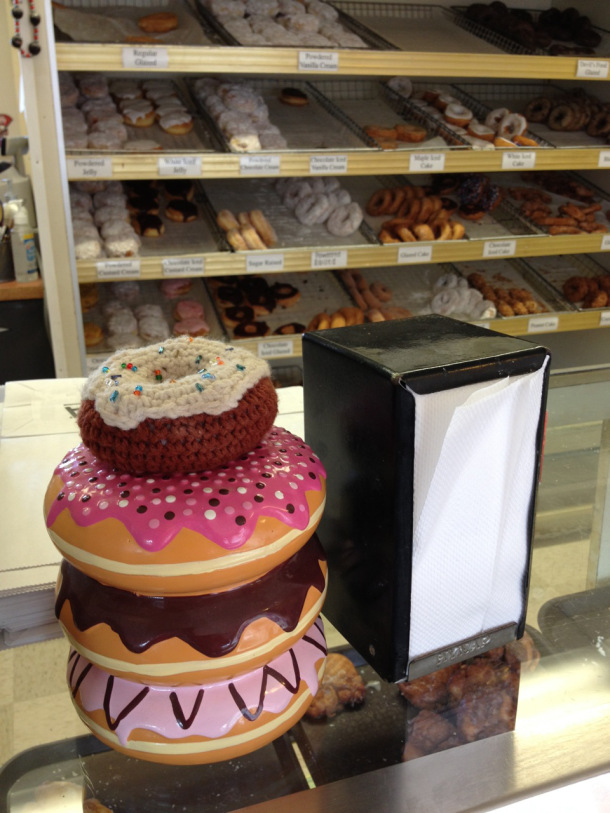 This also means that she won’t steer you wrong: she knows which donuts are the best. 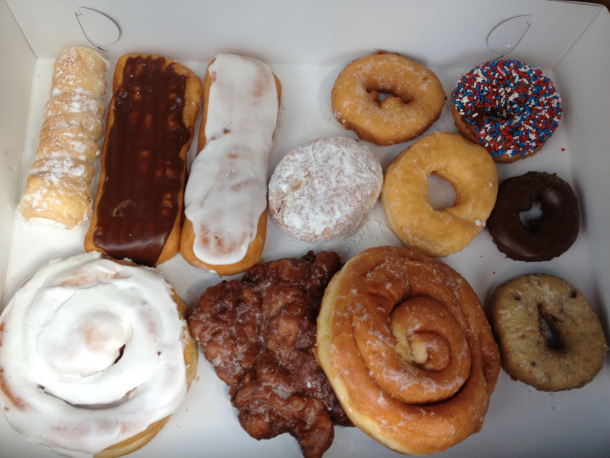 Taking the advice of a few online friends, we picked up an assorted box. And let’s face it, when it comes to good donut shops, an assortment is the way to go. We certainly liked some things better than others, but we didn’t find anything bad in the box. The sour cream donuts were very moist and soft, with the blueberry a special stand-out. We loved the cinnamon rolls, especially the iced one, and the apple fritter was chewy and very appley. And the Bismarcks were about as good as you can get. 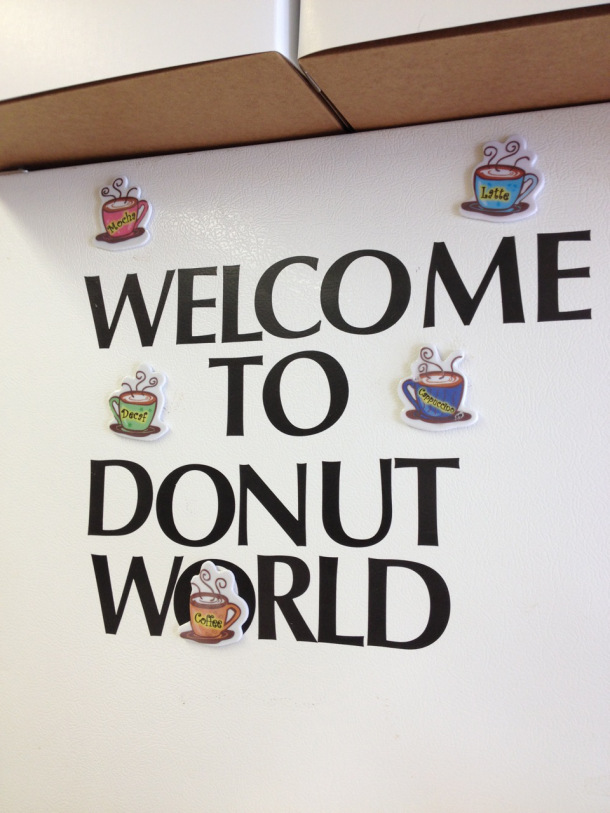 Donut World is a worthy stop for any of the following reasons:

2. It’s a convenient stop coming to or from Hocking Hills.

3. It’s an example of a shop that does one thing, old school, very well.