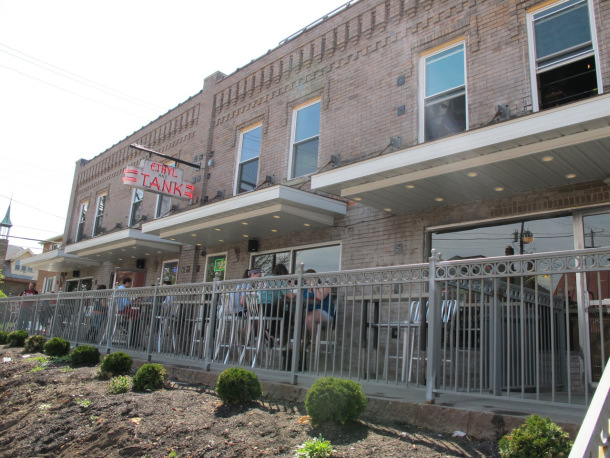 Have you heard about this newer place called Ethyl & Tank? It’s a coffee shop close to Ohio State’s campus. Oh, it’s also a bar with a solid 40 taps of beer. And they’re a restaurant serving burgers, tacos, and brisket. Plus, they’ve got an arcade.

Yes, Ethyl & Tank is a little bit of everything, established to serve the student population surrounding them, but accessible to everyone. 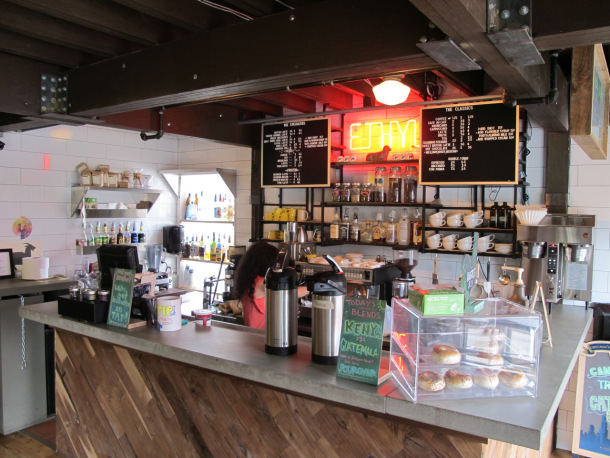 About a block east of High Street – easily walkable but reachable by car only via side streets – is Ethyl & Tank’s long brown brick building, marked by a perpendicular neon sign. Enter through the corner doors and you’ve run into the coffee shop aspect, labeled “Ethyl” in neon. Ethyl sports a full coffee shop menu – cappucinos, machiatos, pour overs – and more. 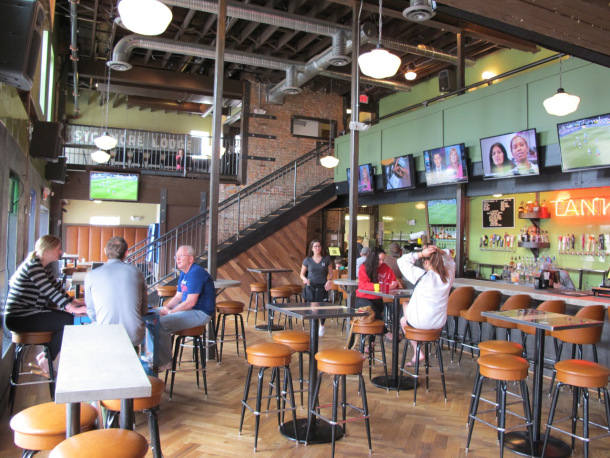 Keep moving and you’ll run into “Tank,” or the bar/restaurant. The large open space is very nicely appointed: leather bar stools, exposed ceilings, brick walls, wood floor. Combined with big windows and a patio out front, the space is bright and welcoming. 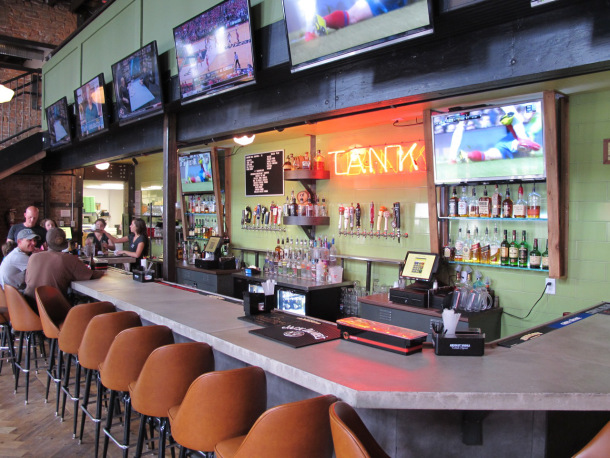 Over the poured concrete bar are rows of TVs, so if you’re also looking for a sports bar: check. 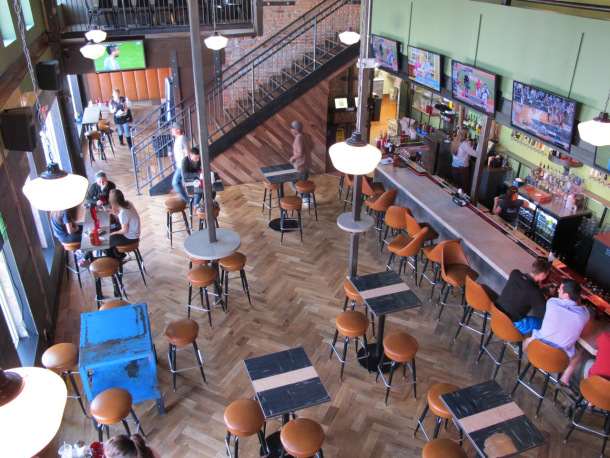 The second level – with more seating, tables, and a small arcade – opens onto the main space. 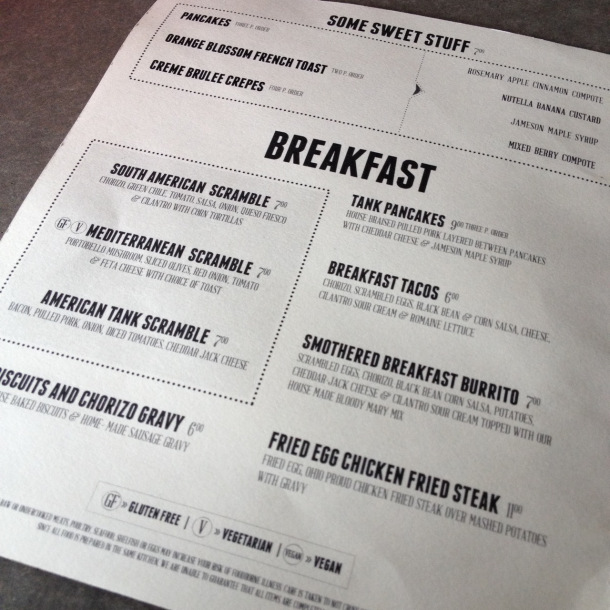 The brunch menu covers a couple pages, and it’s focused on big dishes that pack a punch. Fried Egg Chicken Fried Steak? Biscuits and Chorizo Gravy? Creme Brulee Crepes? They’re not messing around. Notice the availability of some vegetarian, vegan, and gluten free items, too. 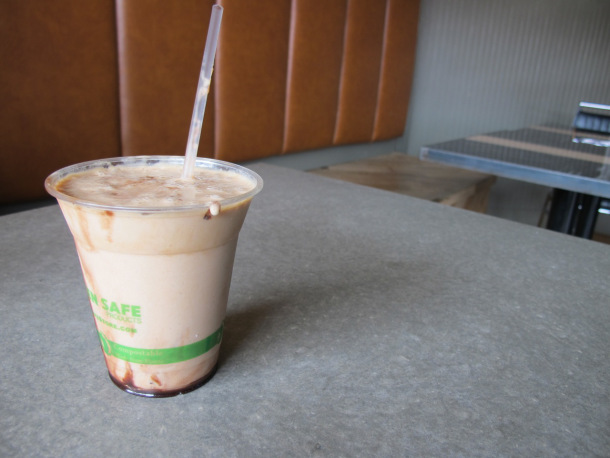 We started brunch with a sample of a blend mocha from the coffee shop. It was nicely whipped without being overly sweet. When I first reached to pick it up, I was surprised at its lightness; I expected the thick, heavy sludge of a corporate coffee shop frozen-uccuino. 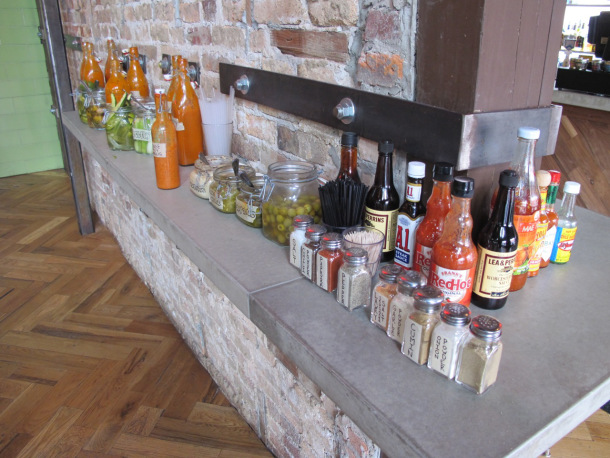 And here’s something else to entice you: the $5.00 Bloody Mary bar. This may be some people’s favorite phrase in the English language. You can’t do a good brunch without a good Bloody Mary, so Ethyl & Tank give you a glass of vodka then turns you lose on the accoutrement. 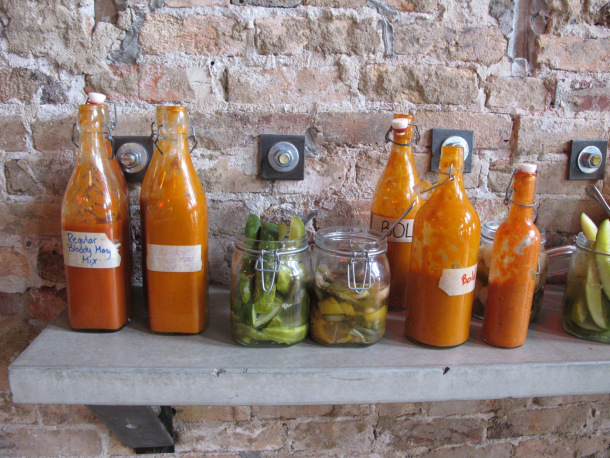 Everyone likes their Bloody Mary the way they like it. Some like it spicy, some like it mild. Some love garnishes, some love it salty, some like everything pickled involved. Ethyl & Tank gets your started with base mixes ranging from mild to mega spicy. 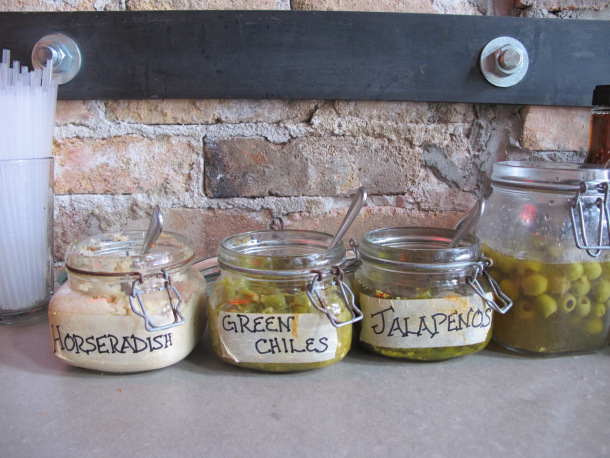 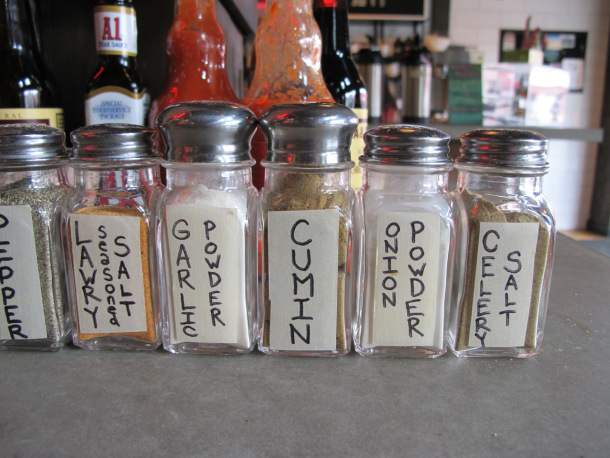 At the end are bottles of hot sauce, steak sauce, and jars of salts and powders. 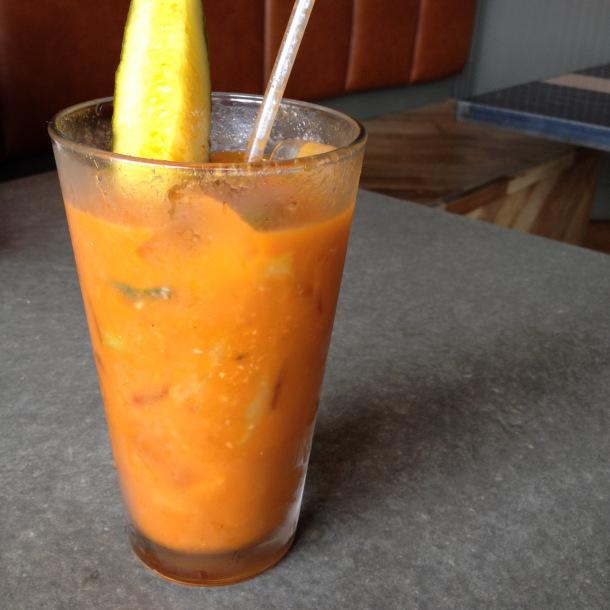 The challenge with build-your-own Bloody Mary’s is that sometimes you don’t know where to start. In this case a list of suggested additions might be helpful, but with E&T’s pre-made mixes, you’re off to a good start. Here’s the end result of our Bloody Mary. 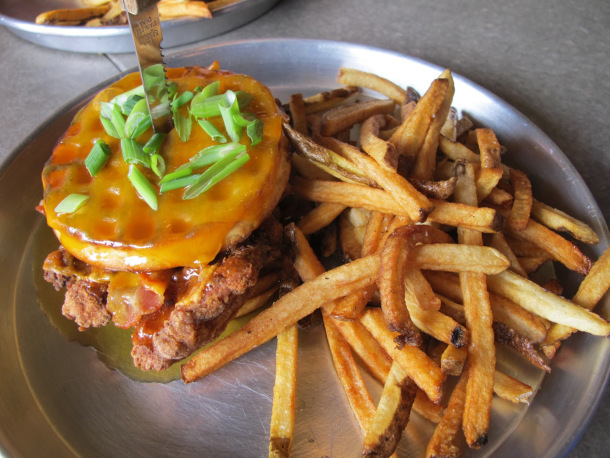 By the time we assembled our Bloody Mary and sipped our coffee, brunch arrived. And arrive it did. We split three dishes between our family of four and still had leftovers.

First, which I pretty much had to order, was the chicken and waffles sandwich. It’s a crispy breaded chicken breast served between two waffles (were they Eggo? If so, it didn’t matter) with bacon, a thin coating of melted cheddar, and syrup. It came with a side of thin-cut fries – just how we like them. All in all, it’s a solid dish. The chicken was cooked through and through, but the seasoning was spot on and the syrup and soft waffles made up the difference. I know some people still don’t get the whole chicken and waffles thing, but trust me: you need to try the dish. It’s a little sweet, a little salty, a little spicy. This is what “they” mean when they talk about a balanced breakfast. 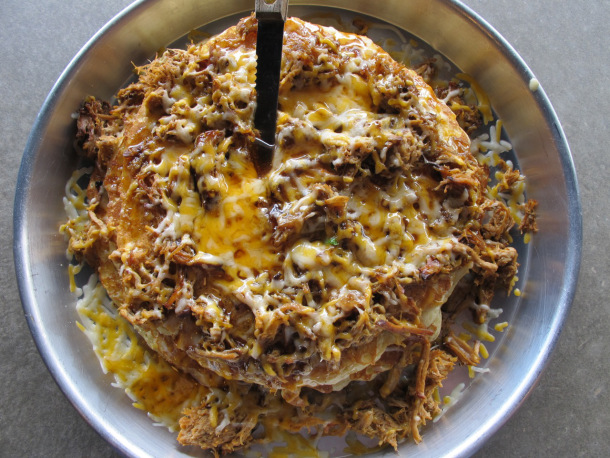 And if chicken and waffles weren’t big enough, we went even bigger with the Tank Pancakes. Just. Look. At. This. Dish.

Tank Pancakes are three big but not ridiculously fluffy pancakes stacked and covered with pulled pork, cheddar, and a Jameson maple syrup. Yes, this dish might seem too over-the-top, but seriously: we loved it. Again, the sweet and spicy balanced each other out. There’s not too much cheese (which could have done the dish in), the pork is tender, and the pancakes are already soaked just right in the syrup. This leaves them soft without being mushy. You’re given a bottle of syrup, but you don’t need it. Another benefit to this dish: it’s perfect for sharing. 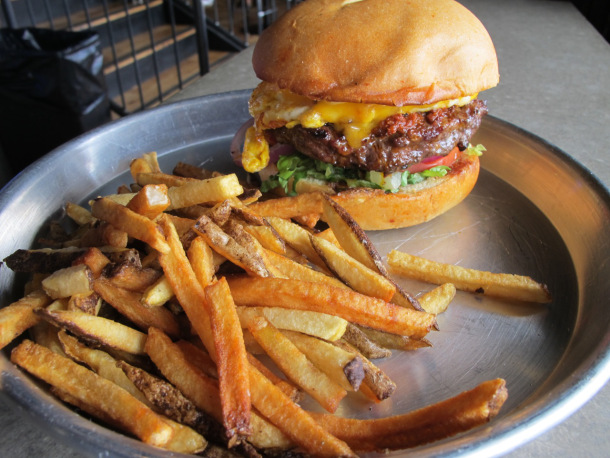 We rounded out brunch with the Breakfast Burger and another side of fries. 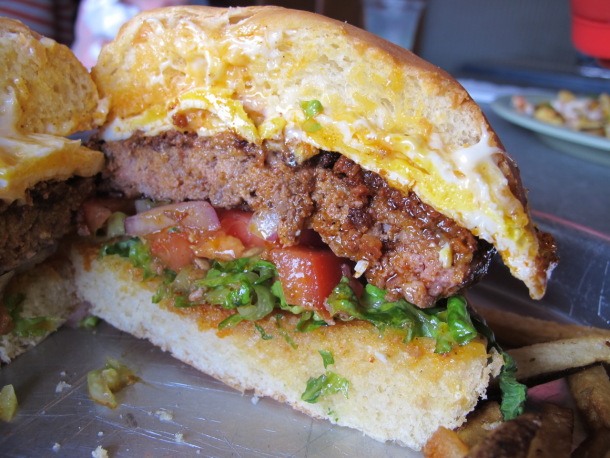 I’ve been craving burgers lately – it must be the turn toward spring – and this hit the spot. It’s built simply with a ground beef patty, lettuce, onion, tomato, cheddar, mayo. The real selling point is a fried egg (to qualify it as breakfast) but also a thin layer of chorizo between the beef and the egg. This little kick of spice adds a certain something that really makes it stand out. 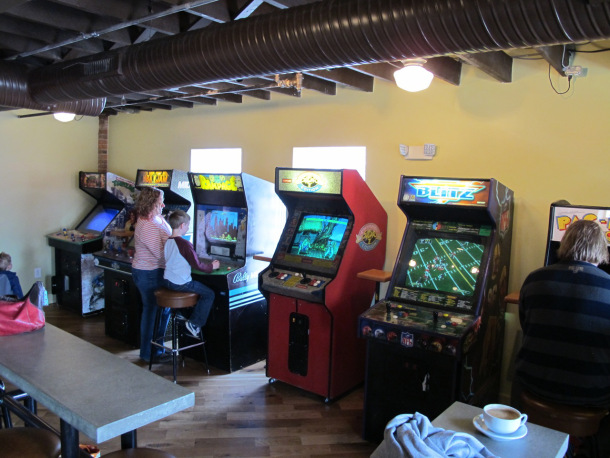 Of course, before leaving we had to visit the arcade. The games are all set to free play and with plenty of classics to re-visit (Pac Man, Rampage, TMNT, Terminator 2, Street Fighter). It was clear that some customers visit just to grab coffee and play games.

I’m sure you can guess already, but we were impressed with Ethyl & Tank. It was really unexpected, from the well-appointed space, to the breadth of the offerings, to the brunch menu. We were also impressed with the prices, which clearly must be kept in an affordable range for the nearby college students.

Ethyl & Tank is owned by same the folks who own The Crest in Clintonville. Our experience there for brunch was so-so, but The Crest is still going strong, and Ethyl & Tank seems to capitalize on similar strengths. And while The Crest maybe suffered from a little over-hype when they opened a year ago (not necessarily their fault), the opposite seems to be true for Ethyl & Tank. It’s sailed under the radar (at least for us) and so offers a surprising experience. We’ve already added it to the list of places to visit again and bring some out-of-town visitors along.