Sometimes, you need to stick with the classics. When we go to a new breakfast place, I can always count on Mr. Breakfast with Nick to order the Classic Breakfast – usually eggs, potatoes, bacon and toast. It’s a great way to test the place on the basics – which are, in our humble opinion, the most important indicators of a restaurant’s foundation. Our Green Bean Delivery box came with some beautiful potatoes, and I was eager to try yet another way to make hash browns…or home fries…or breakfast potatoes…whatever you call them, there are as many recipes in a city as there are people and we keep trying new ways to do them. Normally, what we like is to use some russets, boil them for 12 minutes first, chop them, and then pan “fry” them in a cast-iron skillet. These new potatoes were more tender, with two of them being classic reds, and I knew they could stand to just be chopped and thrown in to a pan with some great bacon fat. (This was a day I was also making bread, so although there are no veggies in our bread from Green Bean, I included that process below as well!) 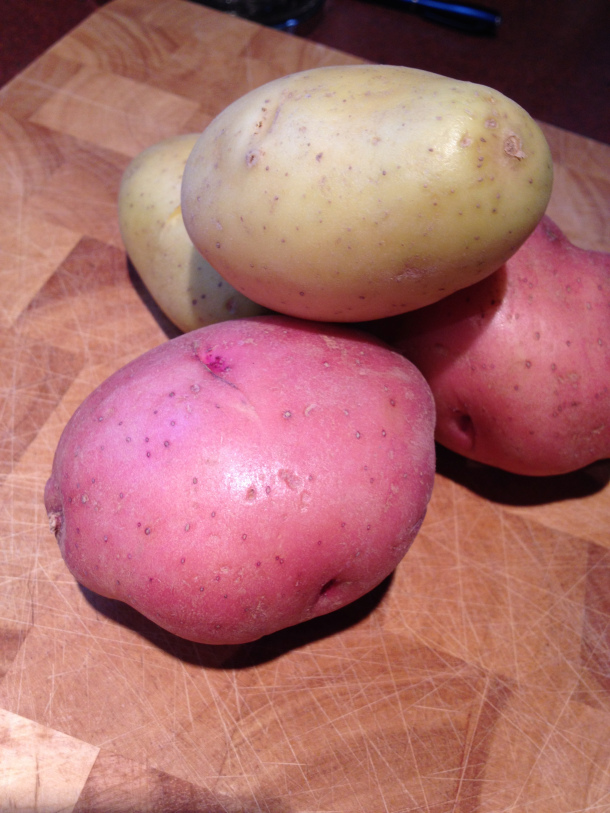 I kept the pieces very small, less than 1 cm. square, knowing that the heat would have to cook through without having boiled them first. 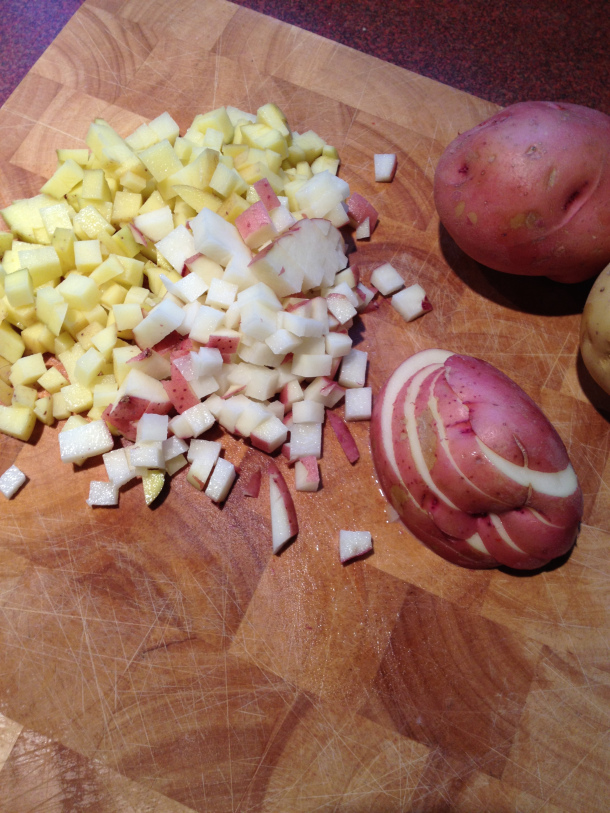 I chopped up part of an onion from the Green Bean Box as well as half a red and orange pepper to throw in. I sautéed the onions and the peppers in the bacon fat (we keep some in our freezer for these very occasions!), and threw the potatoes in when the cast-iron skillet was very hot. 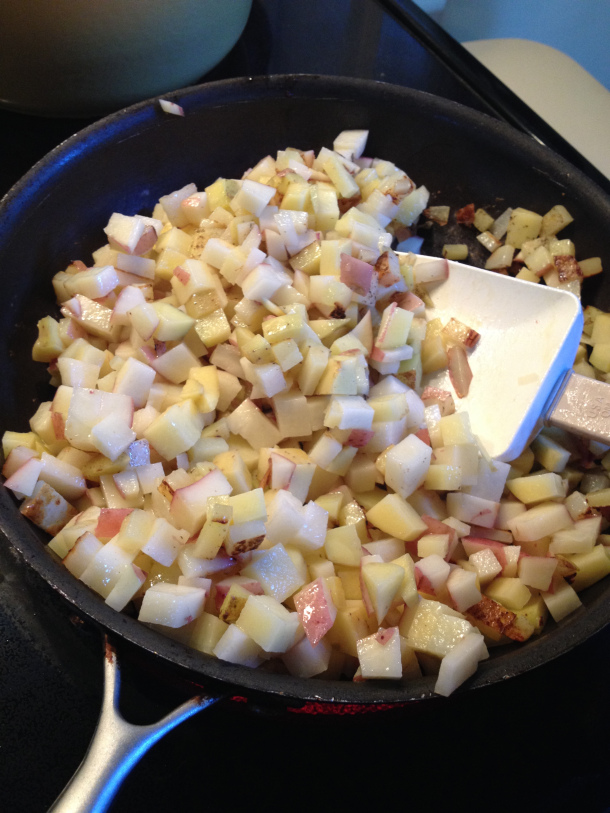 Last year, Chef Butcher from Creole Kitchen gave Nick this incredible cajun seasoning and I try and throw it in whenever I can, so I sprinkled a bit of this on the potatoes as they cooked. (You can see I’m running low!) 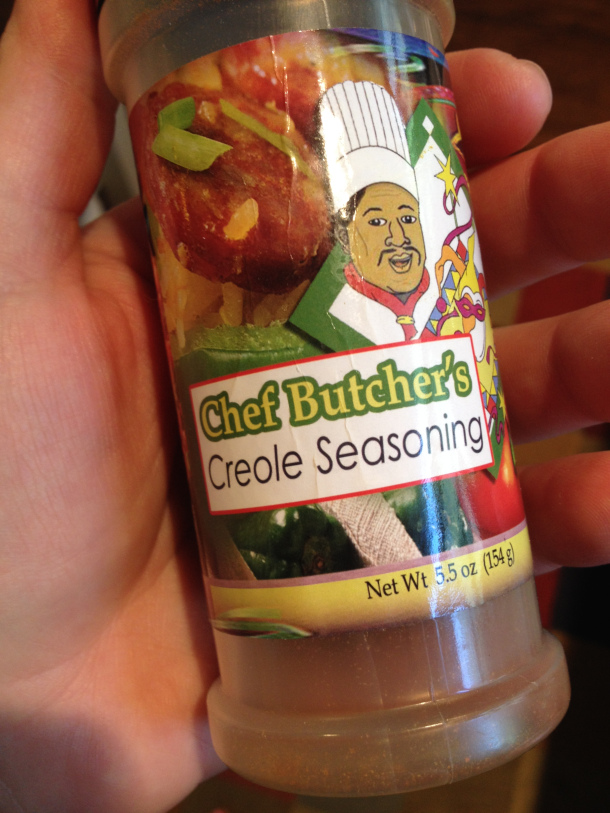 I fried up a nice egg – check out Nick’s post on Ways to Cook an Egg on lots of ways you can add one to this meal. 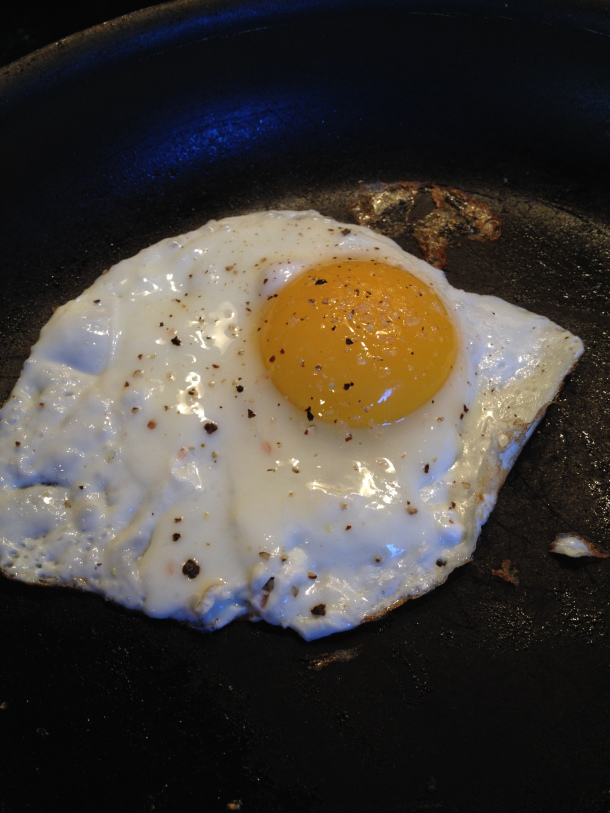 And there you go! The little brown bits on the potatoes were the best part, of course, and the cast iron skillet was the right choice. I still think, given the choice, I would go to the boil-first and then fry method, as they did take a bit longer to cook and they soaked up more of the bacon fat than I liked. But it was still delicious! 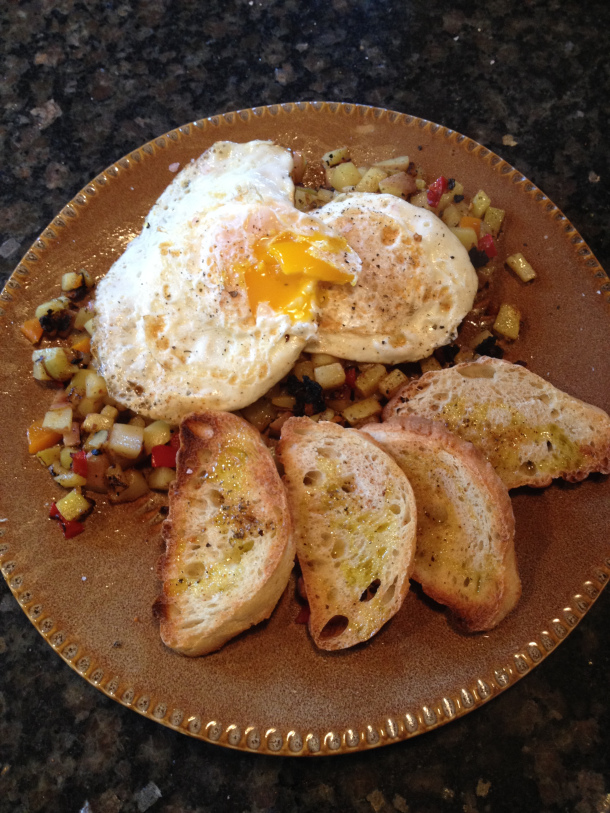 Now on to the toast… About four years ago, Dave Scarpetti of webercam.com fame hosted Nick and I and some friends for a bread-making class. He is a brilliant scientist, and had perfected his baguette recipe that he was sharing with us. I remember very specifically saying to a friend that night “This is fun, but there is NO WAY I have time to make bread every other day.” Well… I went home and, on a whim, tried it on my own. And then tried it again, and again… and for the past four years, we have been making bread every three days for our family.

We do this for a few reasons: 1. We know what is in our bread. We buy good ingredients, and that’s all that goes in. 2. Cost – for 2 loaves of beautiful crispy bread, it costs us $1. Our boys eat more than most adults, so every penny helps. And 3. The taste. Come on over, we’ll make you a believer.

The thing that makes it work, though, is keeping it simple. We have a specific area in our cupboard with all the bread ingredients, a measuring cup that stays with the flour, and bottles for the other ingredients that stay in one place all the time. We also use our bread machine to knead the dough and bring it through the first rise. I know it’s cheating, and I don’t care. I love it. (And we have never once baked bread in our bread machine, so we felt like we needed to use it for something!) And we use a scale. USE. A. SCALE. I can’t stress this enough. Baking is a science and science takes precise measurements. Your scale doesn’t need to be fancy – ours has a units and a tare button – that’s all.

We measure directly into the breadmaker container on the scale, water and flour first. Then yeast. I have tried lots of yeasts, and my favorite is Fleischman’s ActiveDry. I also like the packets much better than the little jar container. It stays active much longer, because once yeast is exposed to air it starts to slow down. And, even with making bread 2 or 3 times per week, by the time we finished the container of yeast, we had issues with the loaves not rising. 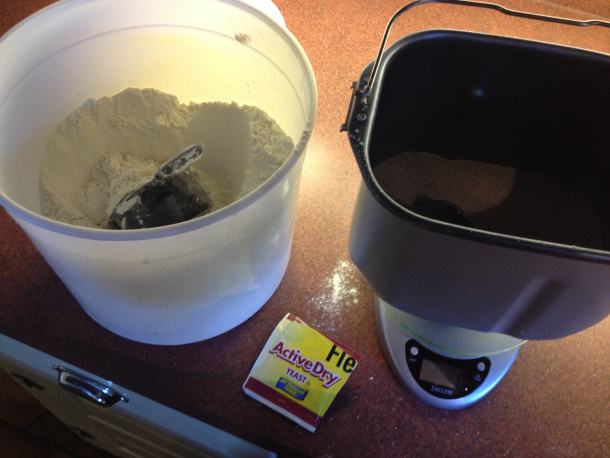 Here are my ever-so-fancy squirt bottles ($1 each at Wasserstrom). 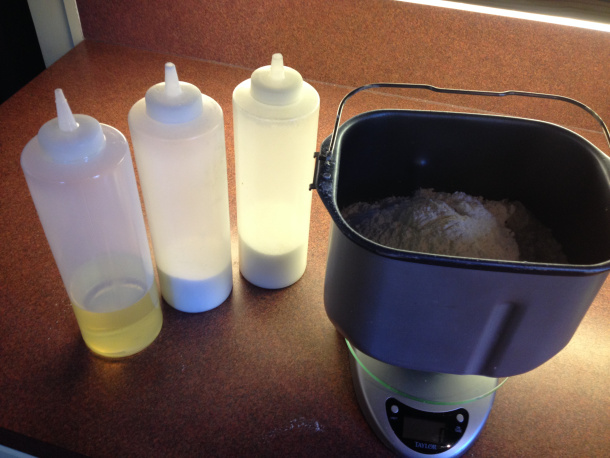 Each of the bottles, containing olive oil, kosher salt, and sugar, has a different cut spout depending on how fast I need it to come out for measuring. 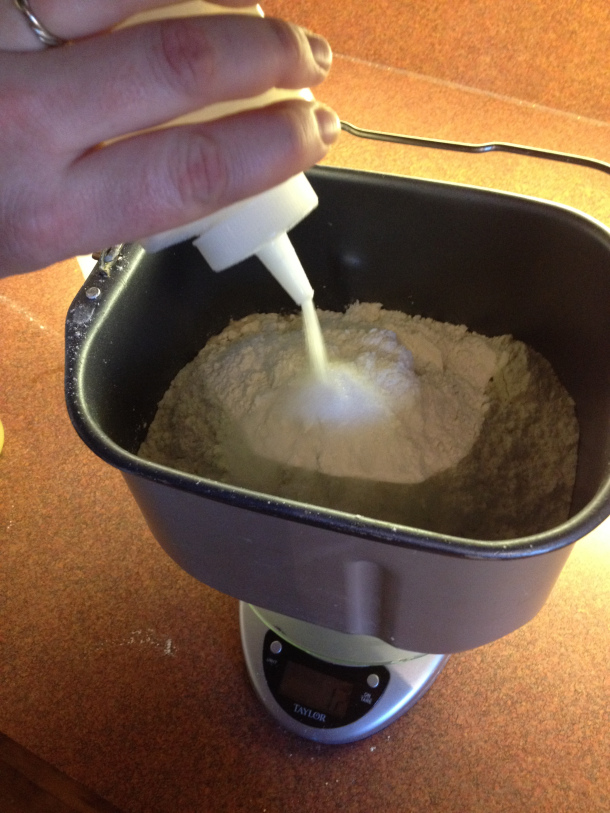 For the first rise, you lock the pail into the breadmaker and put it on the “dough” setting. (If you don’t have a breadmaker, never fear! Check out the recipe below for how to make it without one.)  It will take about an hour and a half and come out looking like this: 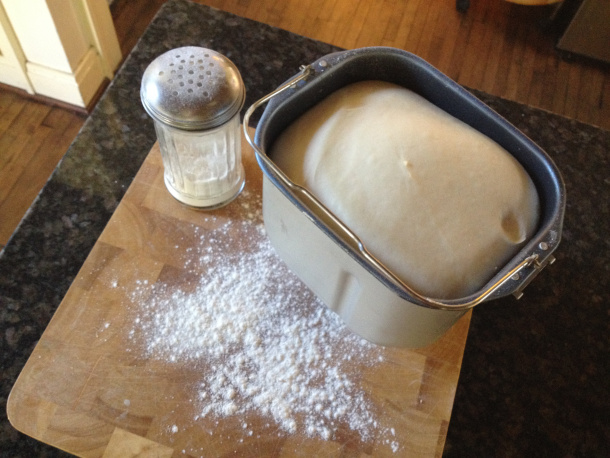 Dump the dough out onto a floured wooden board and shape into a rough mound. I say wood, because we have found that temperature and moisture control are both very important at this point. Something like granite is going to cool the dough down too quickly, and plastic or metal for the second proof doesn’t afford as much rise. Maybe I’m making that all up in my head, but we’ve tried it all the ways, and this is what worked best for us. 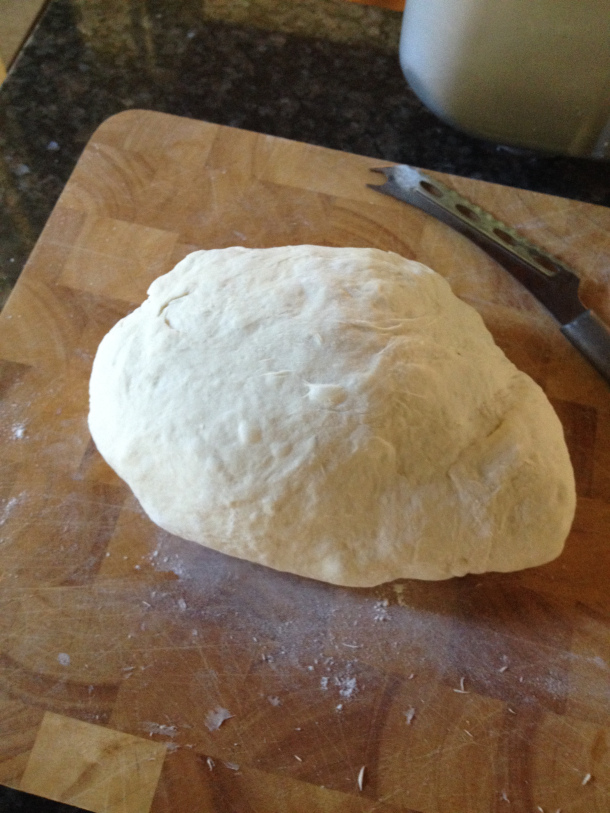 Cut the mound in half, and shape each ball into a smooth ‘boule’ shape. This is done by using both hands to fold the outsides under and to the bottom center underneath the ball of dough. This allows a nice “skin” to begin forming. Dust the tops with some flour and cover with a damp cloth. (What I do is form the boules, wash my hands, dry them on a clean dishcloth and use that to cover…it’s all a system after so many times of doing it!) Turn on the over to 425 degrees. 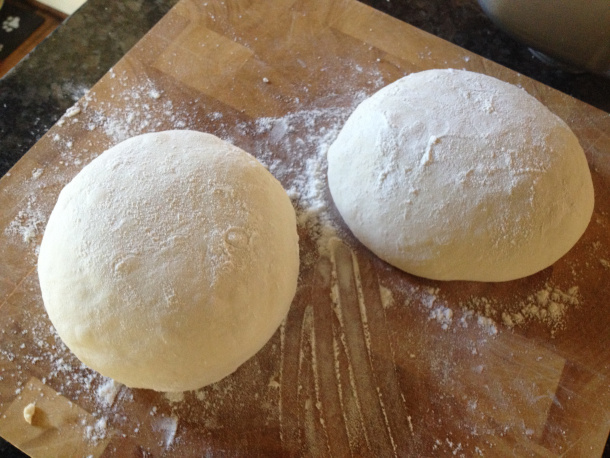 After about 25 minutes (depending on the time of year), your oven will be at a rip-roaring temp (there is no way it is at 425 after the normal pre-heating cycle – ours never is), and the boules will have doubled in size. 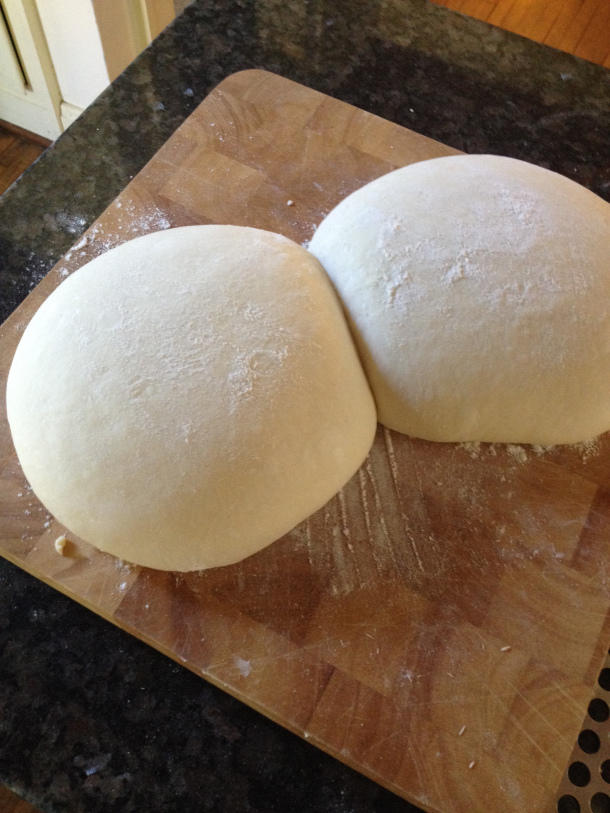 Move them to a cheap vegetable grilling pan. Yep. You heard me right. A vegetable grilling pan – they sell them at Lowe’s 2 for $3 or something. They are made from thin aluminum and are the BEST ways to bake this specific bread. You can leave them in the boule shape or form more “loaves” by tucking in two sides and setting it down on the “seam.” The slashes we do with a very sharp serrated blade, and are where the bread is going to split and grow during baking. You can also use a straight knife, a razor blade, or kitchen shears. 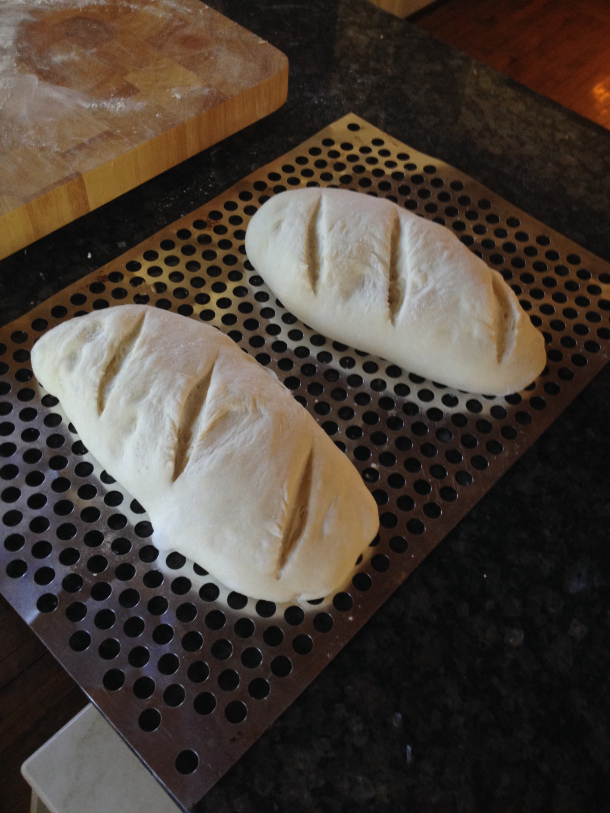 The most important step of this recipe is the water and is impossible to really show you in a picture. In order to get a beautiful brown crispy crust, throw 1/2 cup of water on the bottom of your oven which, for us, means directly on the filament. It creates steam which moves up through the holes in the pan and perfectly crisps the crust. You can do it without this step, but it won’t be as crispy.

20 minutes in a hot oven, and there you have it – two beautiful crispy loaves. 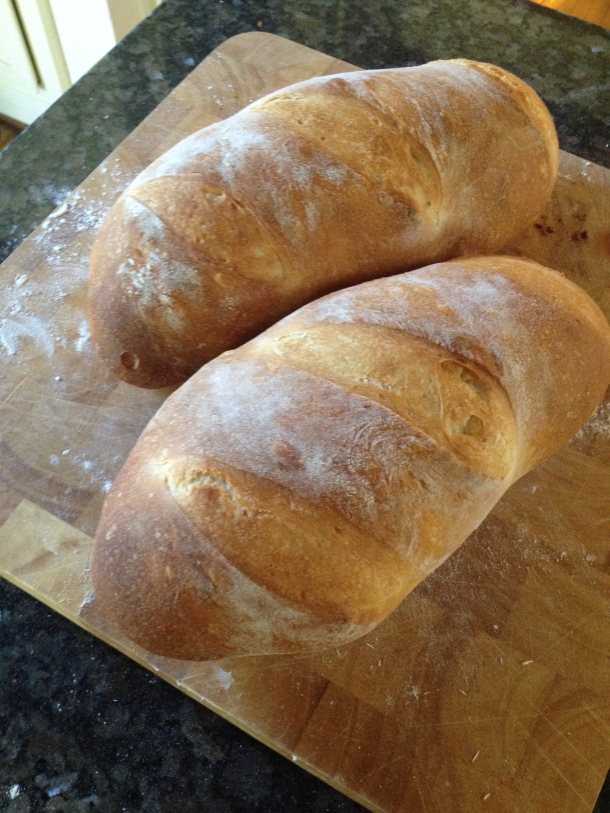 1. Add the ingredients, in the above order, to a bowl and mix to combine. (Rubber spatula works well.)
2. Turn out on a floured surface, cover, and let rise for 1.5 – 2 hours; it should double in size.
3. Punch down and divide into two balls, turning the dough under itself to create a smooth, tight surface. (This is where you can knead in raisins, olives, sun-dried tomatoes, nuts, etc…
4. Turn oven on to 450 degrees. It will take a normal oven about 25 minutes to get up to this temperature.
5. Place on floured surface, cover, and let sit for 30 minutes, or until a fingerprint in the surface of the dough almost disappears when you press into it.
6. Transfer the boules to a thin aluminum vegetable grilling sheet (with holes in it).
7. Take a sharp serrated knife and make 3 parallel slices in the tops of the dough balls, about 3/4 inches deep.
8. Put the bread in the center rack of the oven and throw 1/2 cup of water onto the bottom floor of the oven, right on the metal base or the element. It will steam like crazy. QUICKLY shut the door to trap the steam. Bake for 18 minutes.
9. Take out and let it cool down! Don’t eat (any) bread right out of the oven – the gluten doesn’t have time to set and it will be gummy and taste awful. If you want to eat it warm, let it cool and then warm it back up.

*A Note about Flour – You can use a mix of white and white whole wheat flour (King Arthur is great) but don’t use any more than 1/3 wheat to make up the 600g. Also, use the highest quality flour you can buy. I have tried 15 or so types of low-end flours, Aldi’s, Wal-Mart, etc… these will just waste your time. I use Montana Sapphire Unbleached All-Purpose and I buy it in 25 pound bags at Giant Eagle. Just try to buy the best kind you can, and try different kinds. The price difference is worth it.

Baking Those Fox in the Snow Biscuits