In June our family made the annual trek to the Outer Banks of North Carolina. Those of you who have followed the blog for a while may know it’s a long-standing family tradition, and we look forward to it every year. In addition to all the beachy fun, we enjoy the food the islands have to offer, as we visit old favorites and see what’s new each year. So without further ado, here are some of the culinary highlights of OBX 2014! 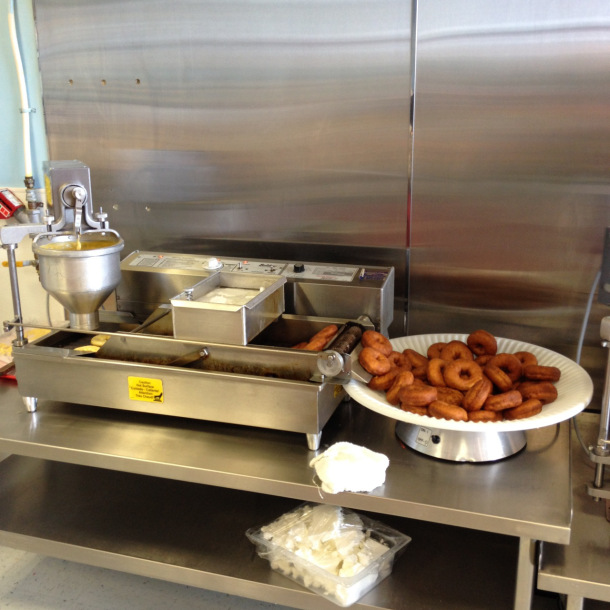 On a tip from a reader last year, we finally discovered Duck Donuts, a relatively new donut chain originating in Duck on the northern Outer Banks. Over the past year Duck Donuts has expanded into nearby Virginia, too, and they seem to be holding steady on the OBX. They use the brilliant model of selling one base, a slightly sweet and spongy cake donut, then dressing that up with frostings and toppings. 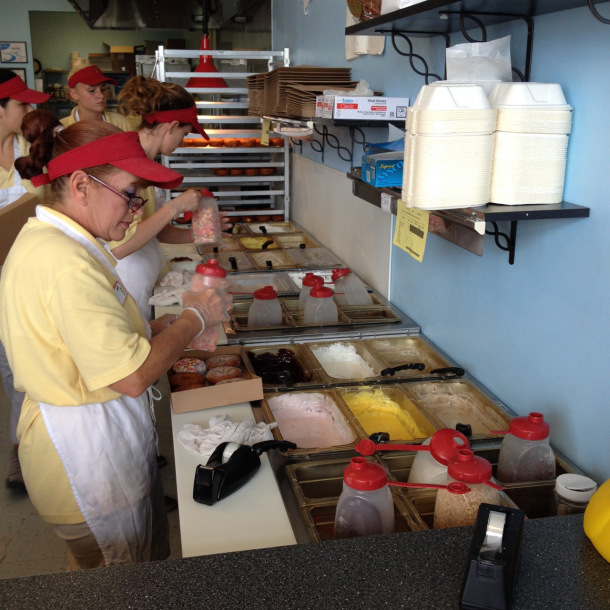 This lets them easily assemble larger orders for the visitors coming and going around the island. 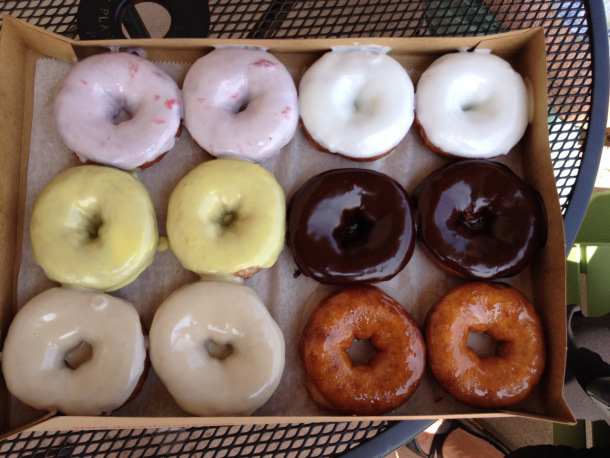 Frostings include everything from strawberry, lemon, vanilla, chocolate, peanut butter, and beyond. 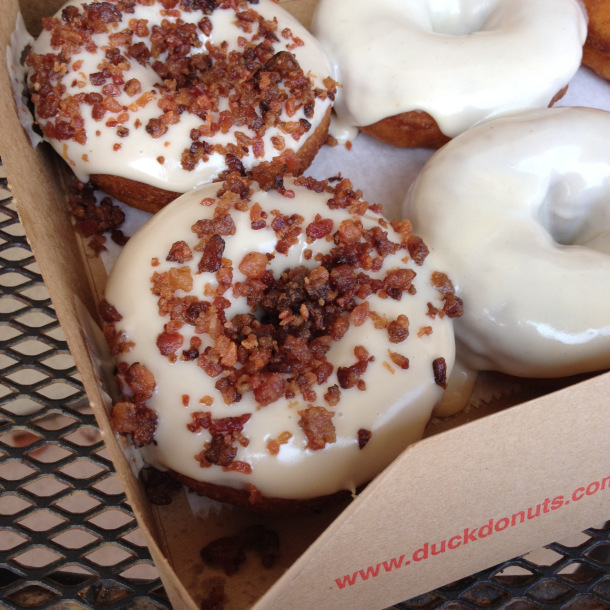 They even have an excellent maple bacon donut, with a sweet maple frosting and bacon bits that aren’t too soggy or too crunchy. 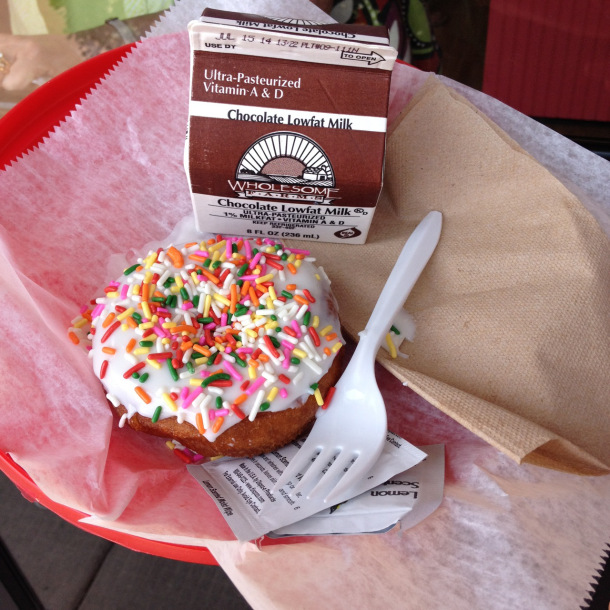 We discovered this year that they offer a little kid’s meal, with a single donut + a drink served on a Duck Donuts frisbee. It even comes with a wet nap! 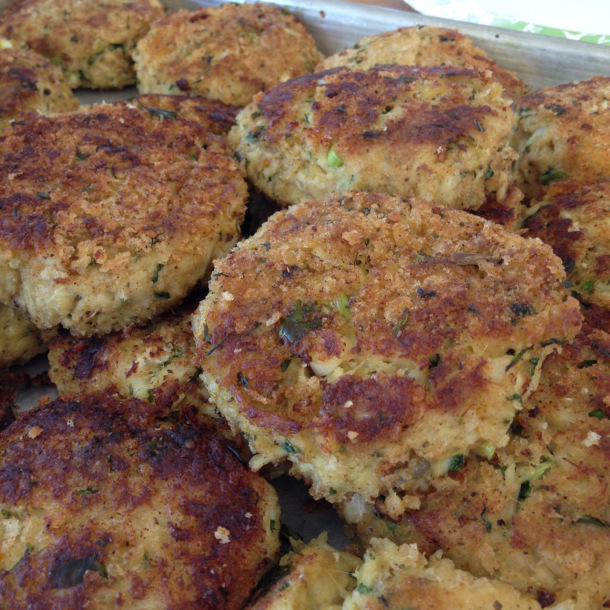 But enough about donuts. (I never thought I’d say that.) On the islands we’re really in the mood for seafood. A string of rustic seafood markets dot the islands, hawking the day’s fresh catches. We make regular stops for crab, scallops, clams, shrimp, and fish. My mother-in-law has perfected a crab cake recipe. Because they’re homemade there’s very little filler and the seasoning is spot-on. 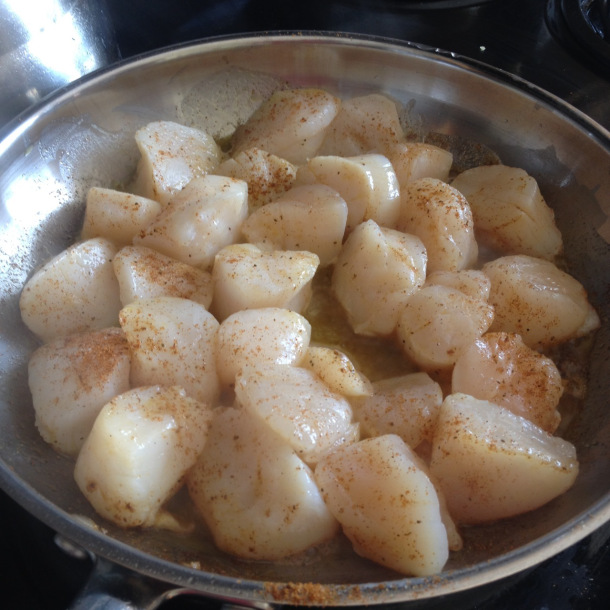 We also crowded the scallops into a pan for a quick sauteed before they were devoured by the masses. 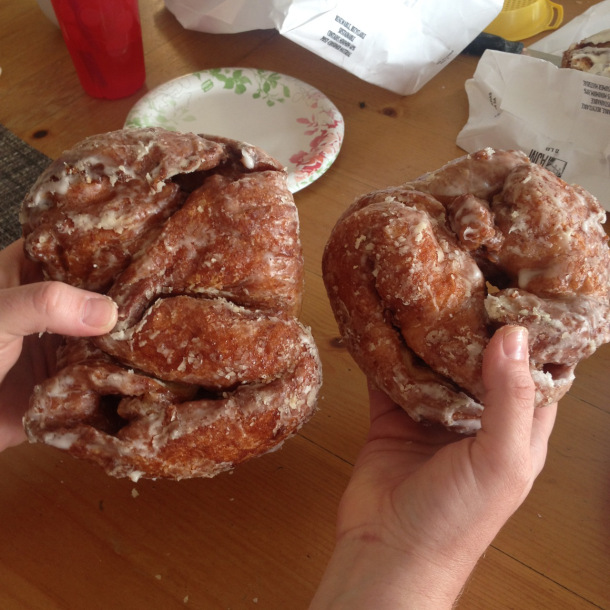 Besides Duck Donuts, our favorite island pastries are the ridiculously giant apple uglies from Orange Blossom Bakery in Buxton, NC. I swear, these glorified, calorie-ridden apple fritters get larger each year.

Over the past years, the service and organization at Orange Blossom had been declining. Customers were frustrated by long waits, the service was a little surly, and they never seemed to have enough product. This year, however, things seem to be improving – maybe there was a change of ownership? 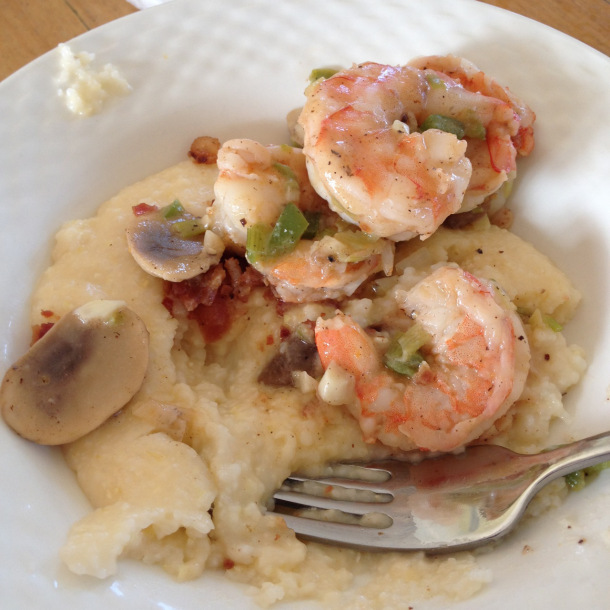 Because there’s such a large group of us, we take turns making dinner each night. Mrs. Breakfast With Nick and I made a perennial favorite: shrimp and grits, with lots of tangy cheese mixed in with the grits, a rich topping of sauteed veggies (and a little bacon), and fresh shrimp. 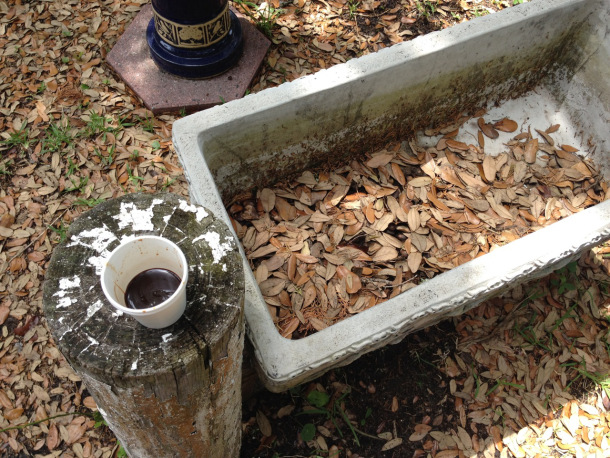 There’s great coffee on the islands, too. We regularly visit The Dancing Turtle in Hatteras, Uglie Mugs in Avon, and both Live Oak Coffee and Ocracoke Coffee Co. on Ocracoke. Here’s an artistic shot of my espresso on a post with some dead leaves in the background. 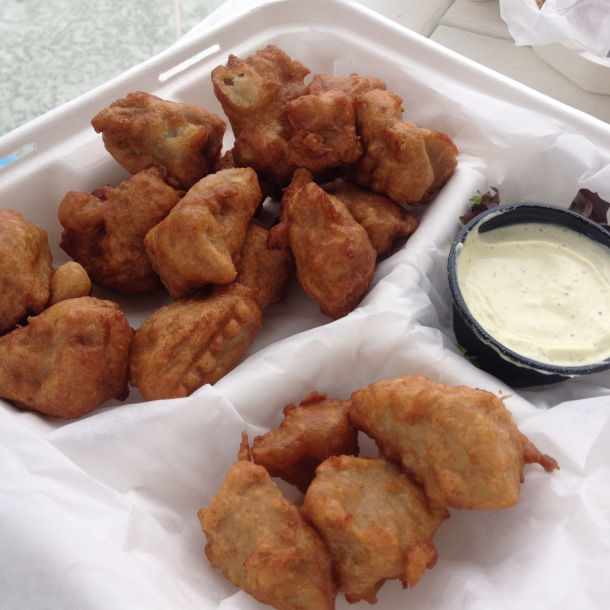 Most restaurants offer lots of fried seafood, and we regularly take them up on the offer. 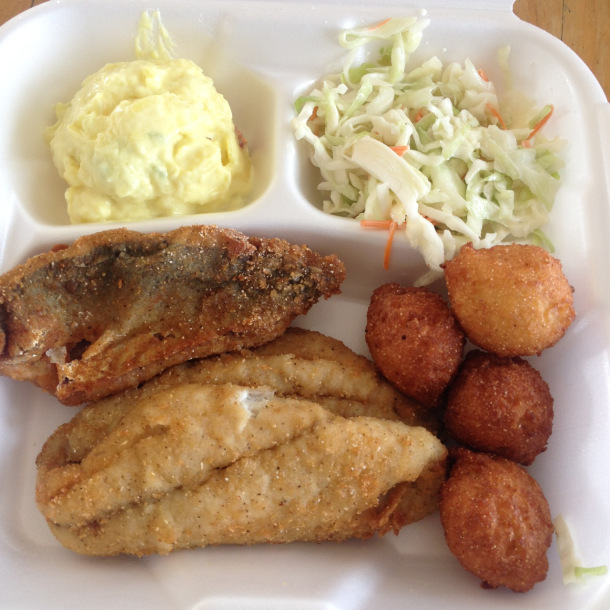 One of our favorite stops for fried seafood are the volunteer firefighter’s fish fries. Many of the little island villages host them on a weekly or monthly basis. We especially like the fish fry down in Hatteras Village. The meals usually come with hush puppies, cole slaw, and maybe baked beans or potato salad. Some of these events have been going on for decades. The little old ladies in Hatteras have been doing it for over 50 years, and they’ll wink and tell you theirs is the best on the Outer Banks. Hard to argue when they’re unloading freshly caught fish straight into the fryers. 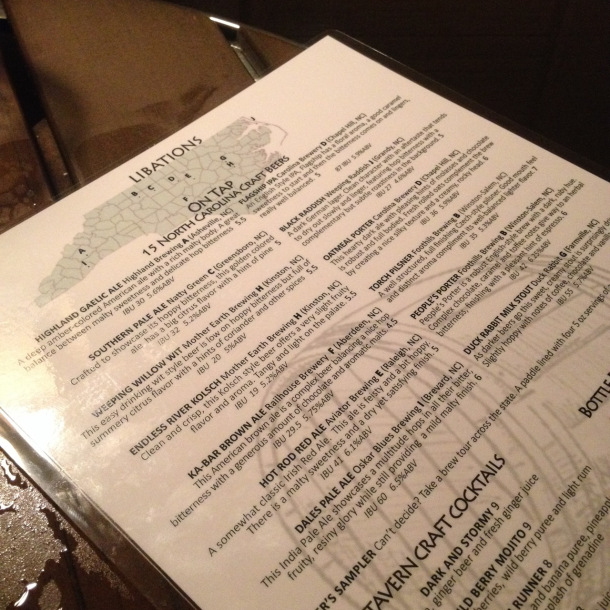 As a craft beer aficionado and beer tour guide, I’m always on the lookout for local brews, so we were especially happy to discover the new Pangea Tavern a block from our house in Avon. The little pub has a large screened-in dining room, so you can enjoy the ocean breezes free of mosquitos (which generally aren’t too bad anyway). The real star of their drink menu is the list of 15 North Carolina beers on tap. 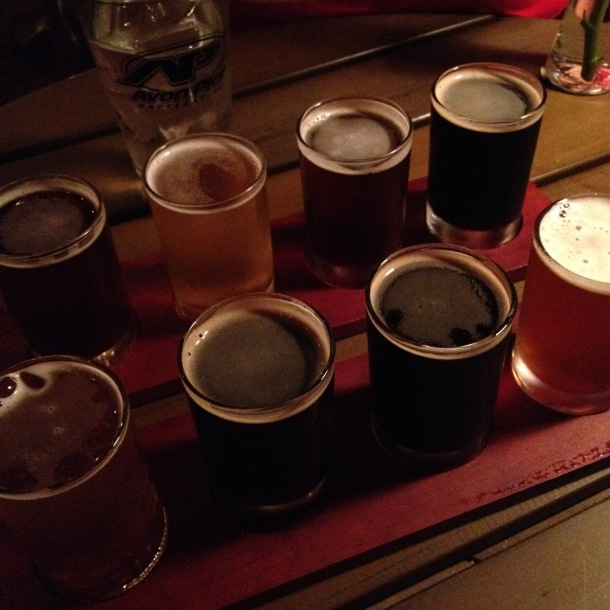 Even better is that they offer beer samplers, so we tasted North Carolina’s takes on pale ales, saisons, amber ales, milk stouts, IPAs, wits, porters, and more. In summary: North Carolina is doing it right.