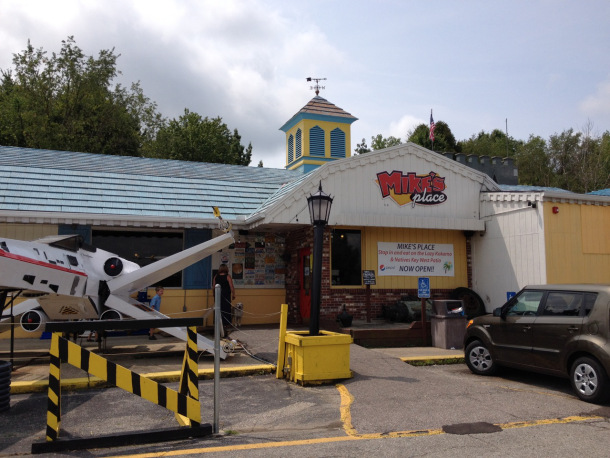 I seriously don’t even know how to begin to describe Mike’s Place. Okay, it’s a restaurant. It’s also a tourist destination. A college hangout. A collection of kitsch. A mish-mash of pieces. Or a crazy essay. 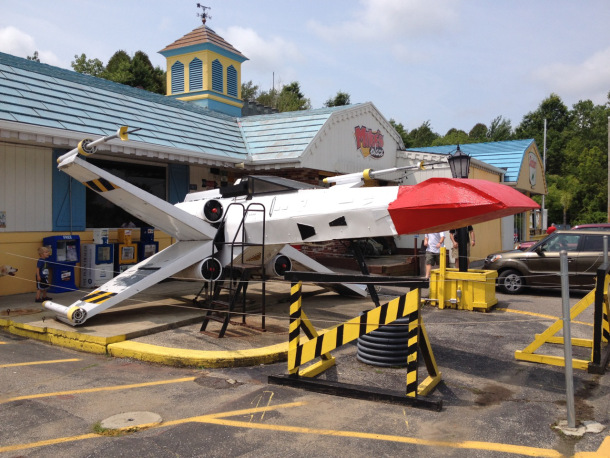 Those who know Mike’s Place know it well. It’s not the type of place that you  easily pass by. For one thing, there are the decorations, like the giant X-Wing out front. We first heard about Mike’s from Laura Lee at Ajumama. All she had to say was, “X-Wing out front” and we were sold. 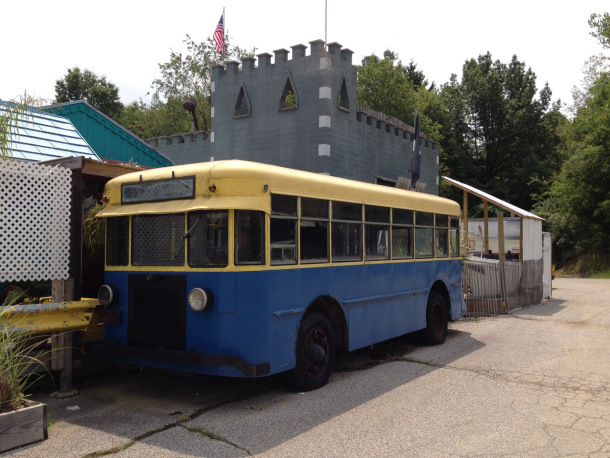 Then there’s the building itself, which is assembled – International Space Station style – from many different components being welded together. Part of the building looks like a castle, part of it is like a traditional restaurant. But then there are a couple busses turned into dining rooms. There’s a boat converted to a seating area. A small shack, a faux corner store. The result is a maze of rooms, hallways, and nooks and crannies. I wonder if they’ve ever lost a customer in there? 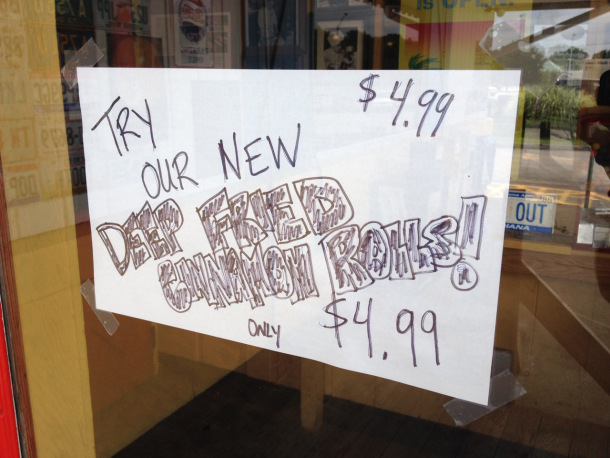 And then there are the signs. Mike has a lot to say. Everywhere you look, there are things to read. Handwritten signs, permanent signs. Short ones, long form ones. Some informative, some completely unnecessary. 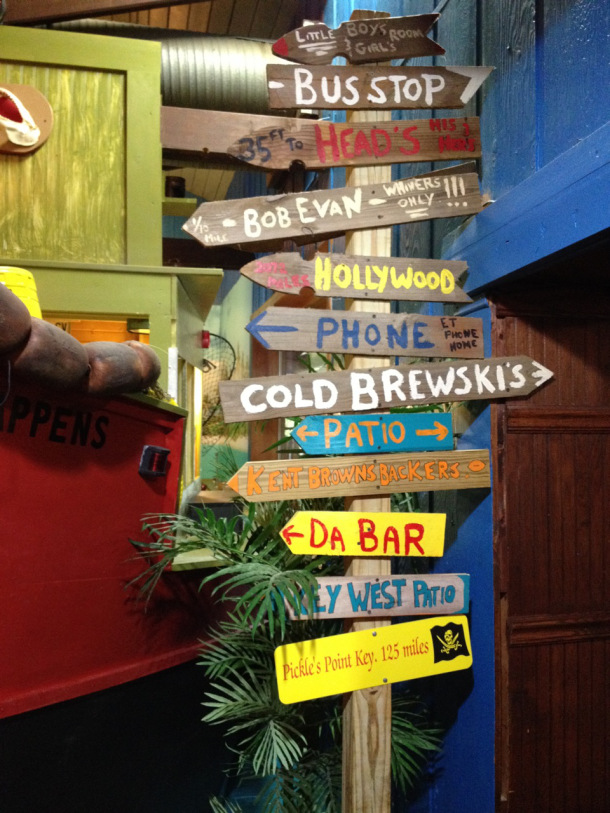 Near the entryway is a post full of signs that (for the most part) point you in the direction of bathrooms, themed seating areas, and the Bob Evans down the street (for whiners, it says). 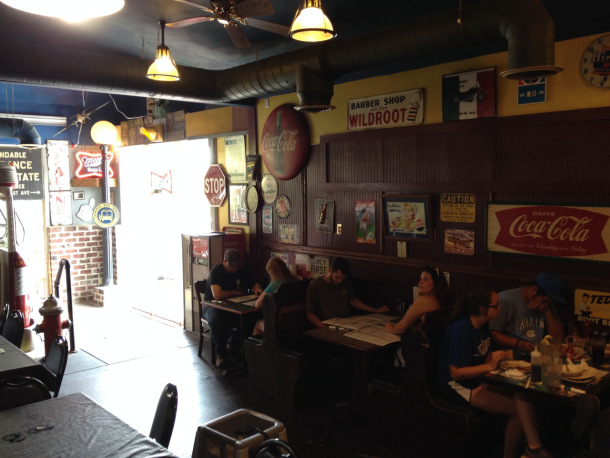 Pictures can hardly capture the feel of the place; the lighting and close quarters make taking proper photos too difficult (at least with an iPhone). Just imagine a colorful maze of rooms. If you’re a first-time visitor, your only hope is to follow your server to your table, and then hope you can find your way out. 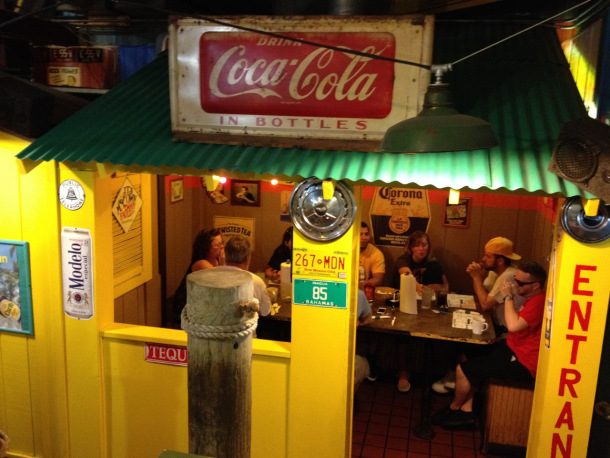 Many of the seating areas are separated into different rooms, like in a modified bus or a shack. 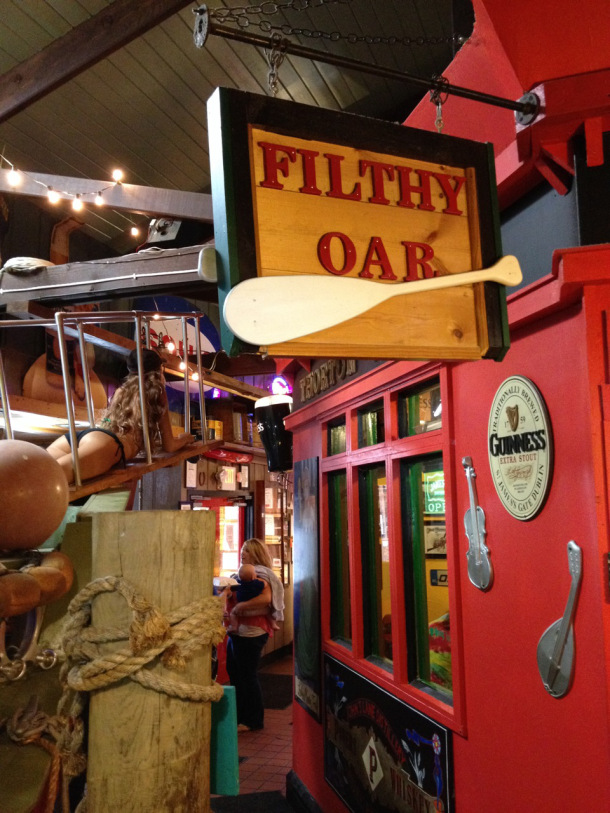 And many of them are named. We were seated in a boat referred to as “Ship Happens,” with a sign saying “The Filthy Oar.” 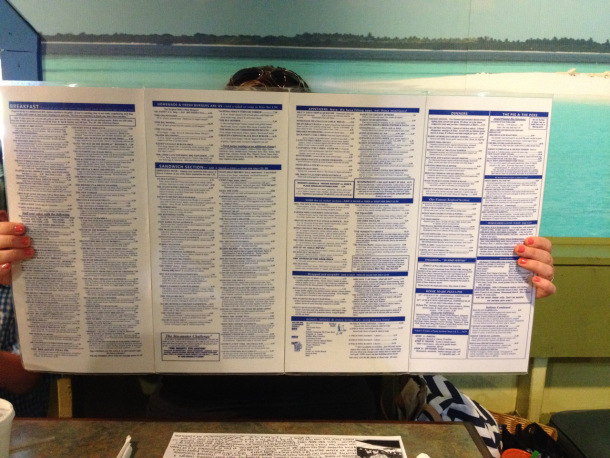 Remember I mentioned the crazy signage? The trend continues with the menu. It’s ridiculously huge – one of the biggest I’ve ever seen. If you can’t find at least one item to appeal to you, then you’re in the wrong place. Mike will probably tell you to go to Bob Evans. 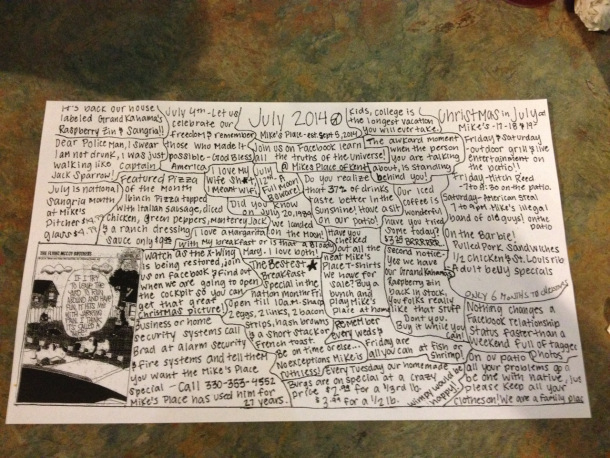 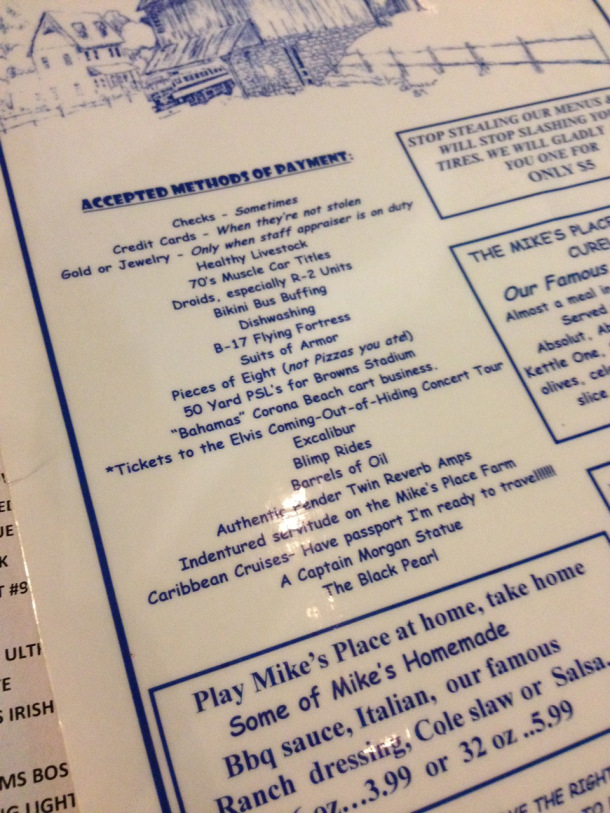 The menu (which is on the website) provides enough entertaining reading to keep you occupied through any wait. You can tell that Mike is a talker with a big sense of humor. Case in point: the accepted forms of payment. There’s also a Rules of Dining at Mike’s Place, plus lots of colorful commentary spread throughout the menu. 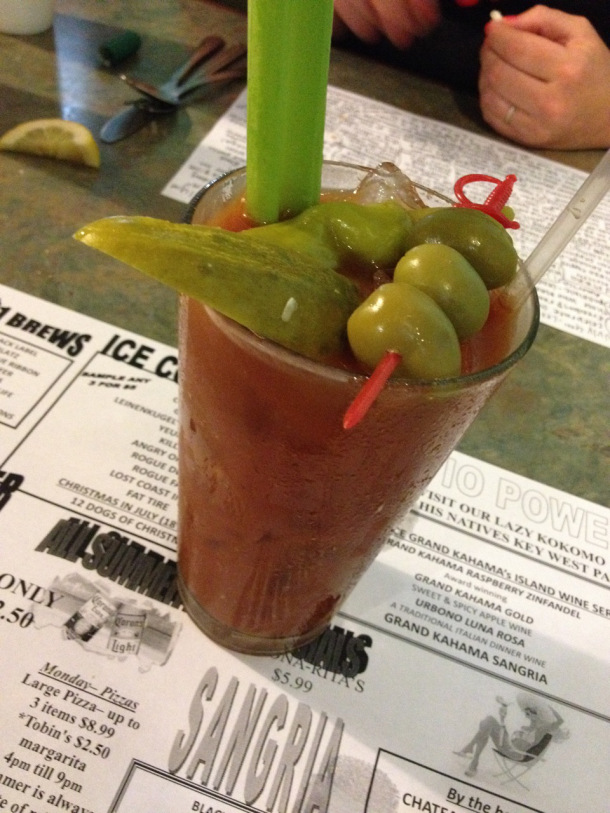 Somehow we managed to choose something from the menu. We started brunch with a smooth and spicy Bloody Mary. 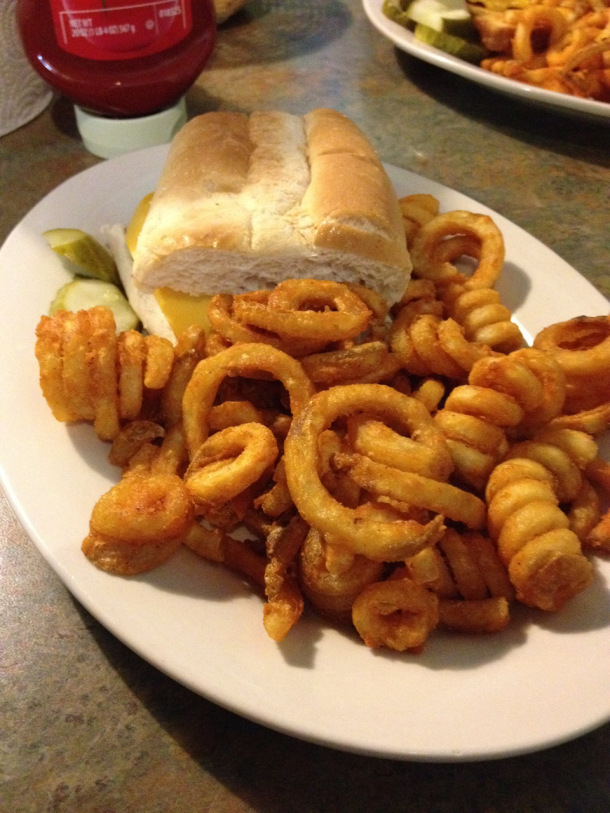 The kid’s menu is pretty sizable, too; a note on it jokes that they check IDs and will feed over-age kids to their pet dragon. Here’s a cheeseburger with curly fries. 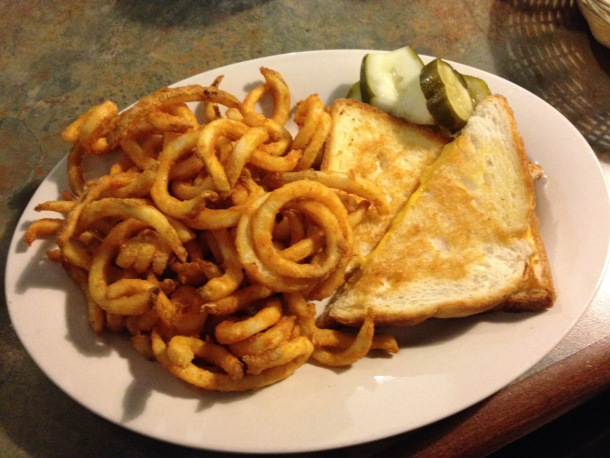 And a grilled cheese with curly fries. Why do curly fries always taste better than regular fries? 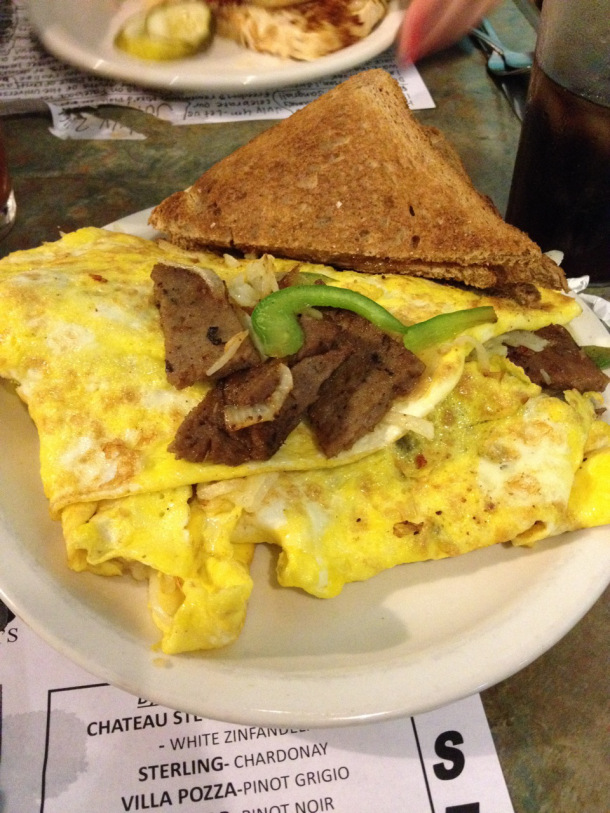 We had a recommendation for the omelets, so we tried the Pat O’Brian Omelette. It’s a giant beast of an omelet, loaded with gyro meat, hash browns, and sauteed onions and peppers. It’s enough for three people. 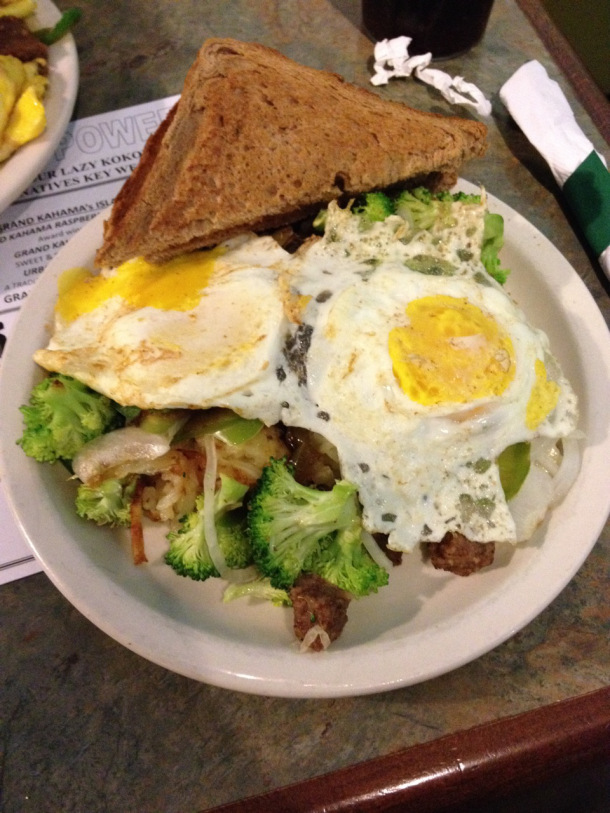 We also tried the Buckaroo Bonzai Bomber, a stir-fry or hash of eggs and meat on a bed of broccoli, onions, peppers, mushrooms, and potatoes. The eggs were a little over-done, but we really liked the stir-fried veggies. More places need to serve this, or we need to make it more at home. 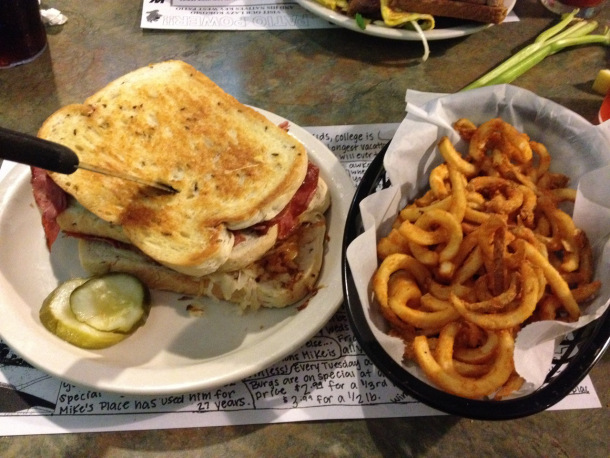 And finally we had the Reuben-Reuben, a tall stack of the usual suspects in a reuben sandwich. Very nicely done. Served with curly fries.

It’s clear that you go to Mike’s Place for the experience. The food is certainly good, but it’s not truly the focus. You really go there for the eclectic seating or the crazy decorations or rambling menu. Honestly, Mike’s is an example of what TGI Fridays is trying to be, with the colorful kitsch scattered around the walls.

I can see why it’s a classic stop for Kent State students and alumni, and for travelers in northeast Ohio. Given that there’s so much more to see and try, we’ll be making it a regular stop in the area.