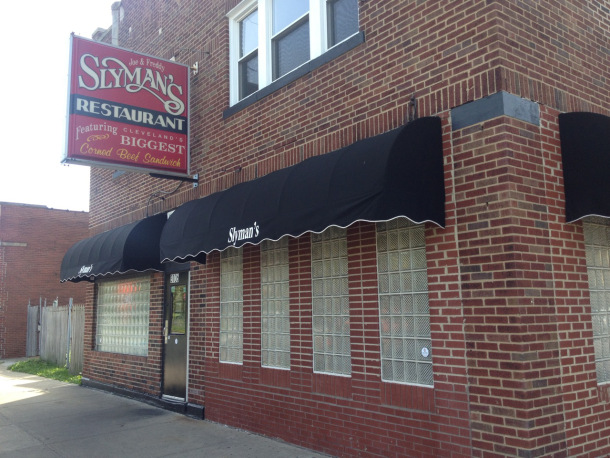 Following a stellar weekend trip to Cleveland last year, we’ve been itching for the opportunity to return. Through last year’s trip, we experienced a memorable round of bars, restaurants, breakfast spots, and markets, but like any good city visit we left with an even larger list of places still to try. At the top of that list: Slyman’s. So on a return trip this past weekend, we sought out this Cleveland favorite, and it took only a few minutes to see why so many people recommend it. 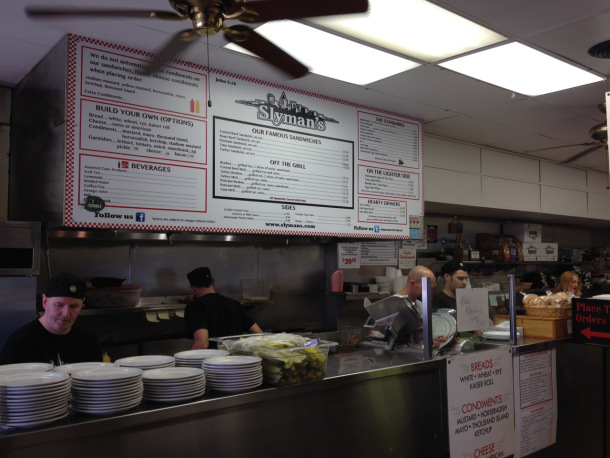 Busy breakfast places are easily recognized by their noise. The moment you step into the neighborhood you can identify the hub of activity, from busy customers waiting inside and out, servers dashing to and fro, and the kitchen clattering. What’s surprising about Slyman’s is the silence outside. We pulled up and parked on the street out front, and from there you wouldn’t know what a busy place it was inside. 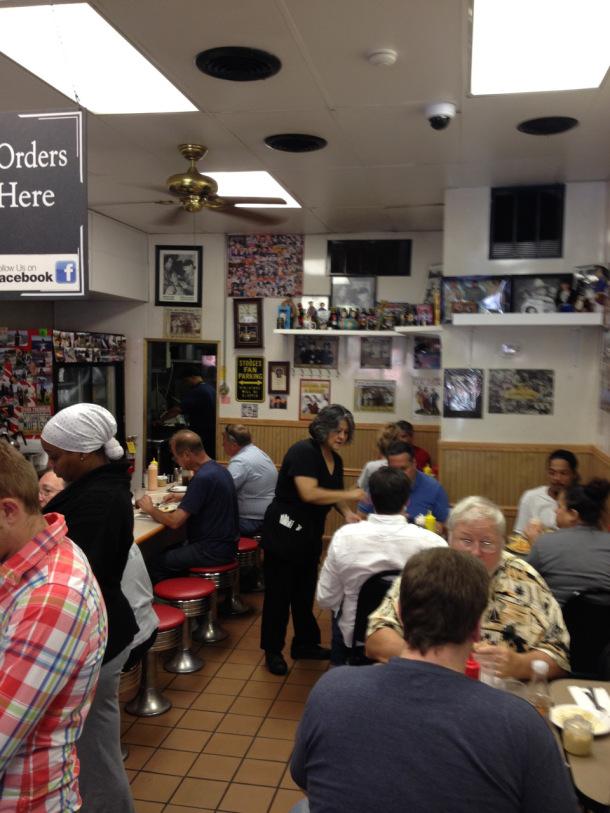 Once we stepped in the doors, though, it was clear that Clevelanders breakfast here. We found a table quickly, but the restaurant was busy busy busy. Nearly every table was full, and while we certainly didn’t feel out of place, we were clearly tourists. 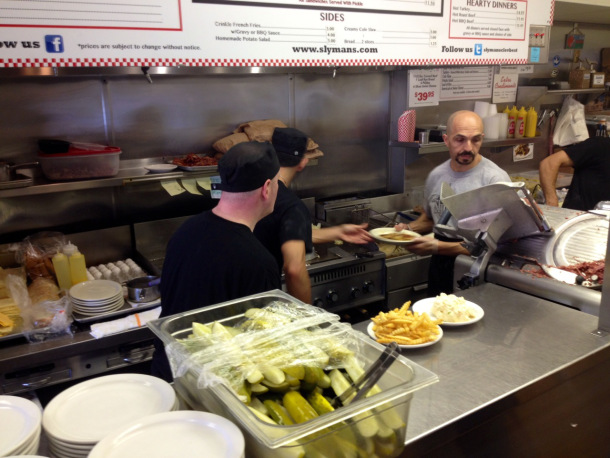 There’s a familiar look to delis. Usually they have a big, long counter and an equally long menu hanging over it. I’ve seen it everywhere: Katz’s in New York, Katzinger’s in Columbus. It’s the signature deli look. Also, there’s a big tub of pickles. 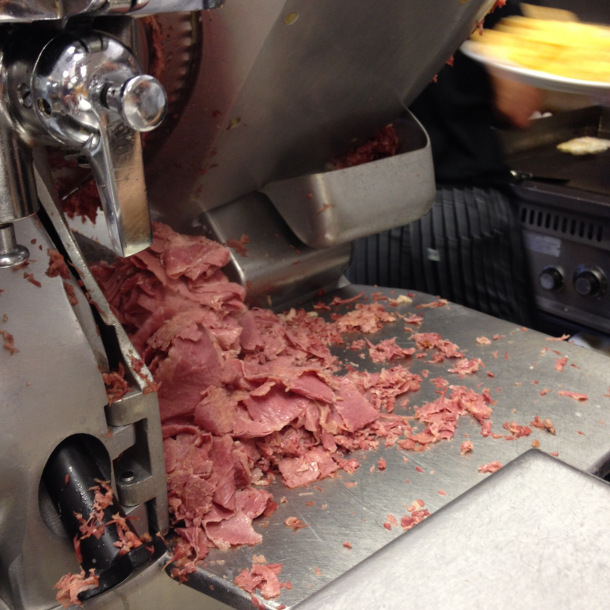 And then there’s the shaved meats. The delicious, delicious shaved meats. Slyman’s boasts the best corned beef in town. Obviously this takes center stage in their reubens, but they give it a chance to shine at breakfast, too. 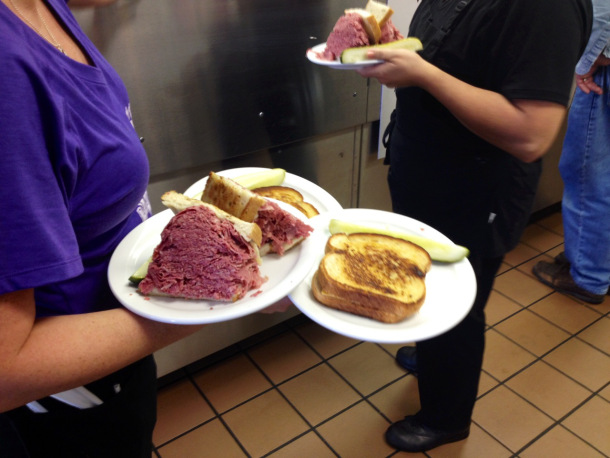 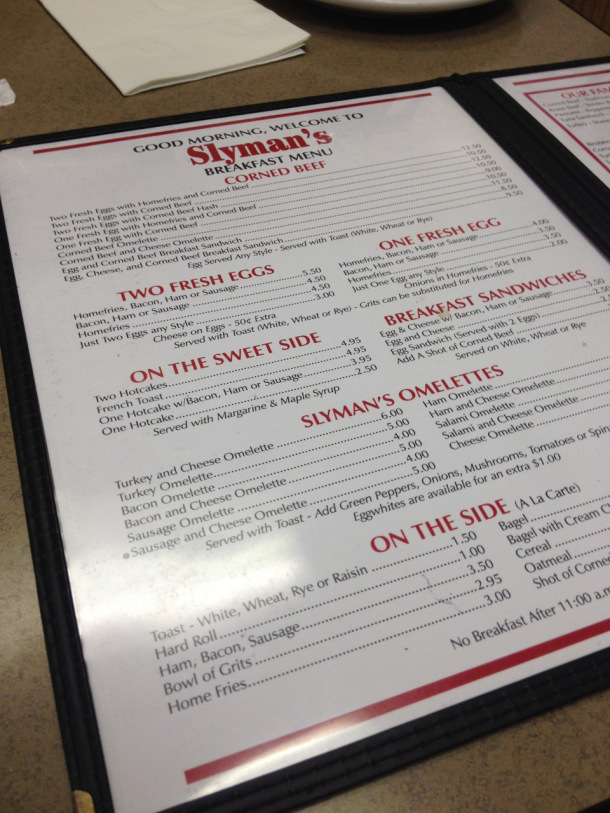 Slyman’s breakfast menu is straightforward – no real surprises – but obviously the corned beef is prominently featured on eggs, in omelets, in sandwiches, or as a hash. 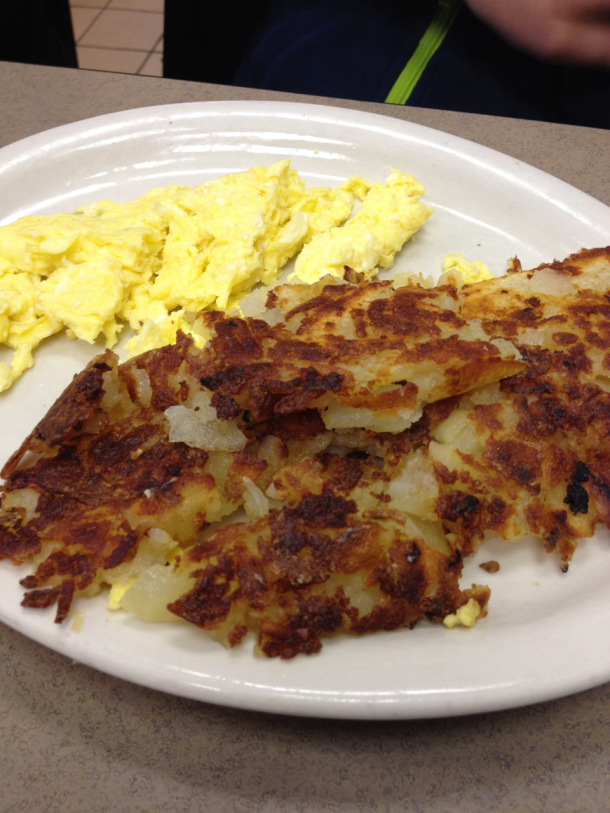 Both of our boys were very hungry that morning (even more so than usual), so they absolutely devoured their breakfasts. First off: a plate of scrambled eggs and home fries. The eggs were well done with being dried out and the potatoes had a nice, crispy brown to them. 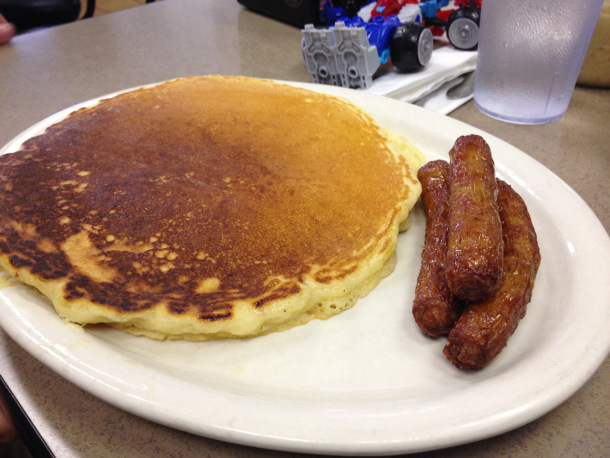 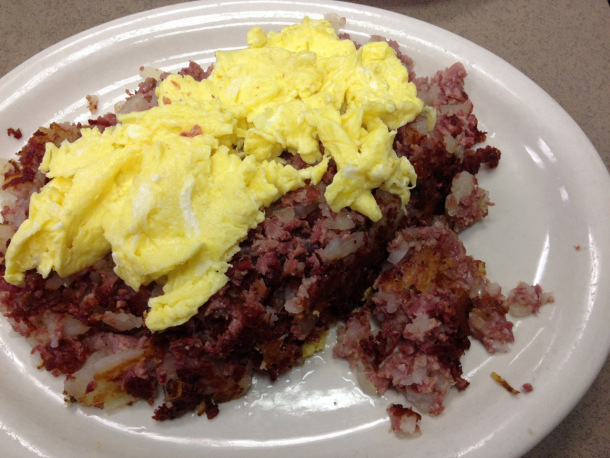 I’m a fan of corned beef hash but I tend to shy away from it. Too many canned versions that are mealy and taste like metal. But when I see big tubs of corned beef freshly brined, and I see the slicer working away, I know it’s a safe place for some real hash. So that’s how I ended up with a monster plate of corned beef hash. This is honestly some of the best corned beef hash I’ve ever had. The beef is finely chopped and mixed thoroughly with the potatoes, which are the right balance of soft with crispy edges. The whole thing is grilled with a fine crust, then topped with eggs of your choice. In retrospect I should have ordered the eggs over medium instead of scrambled, but it ultimately didn’t matter. 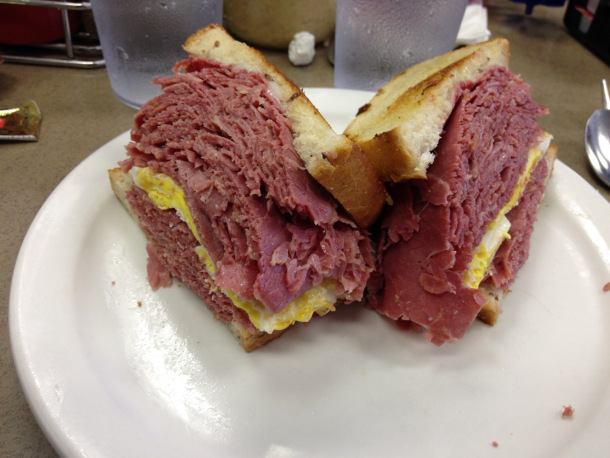 As if that wasn’t enough, the egg and corned beef breakfast sandwich arrived stacked high on rye. The beef is nice and lean, ideal for a sandwich. Our server allowed  us to order the egg scrambled or over hard, so there’s no runny yolk. Between the hash and the sandwich, Slyman’s is a shrine to corned beef at breakfast. 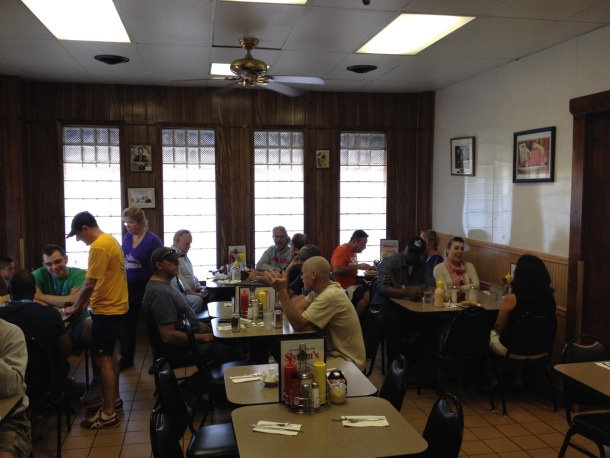 Slyman’s exudes an old school vibe. It’s clearly a restaurant that has earned its accolades and its regulars over the years. It’s not fancy, and while the servers don’t take time to chat, they’re still welcoming. So even as an outsider, it’s easy to feel included, and sitting there with a big plate of corned beef hash on a bustling Saturday morning, it’s easy to see why Slyman’s tops a lot of people’s lists for Cleveland breakfasts.