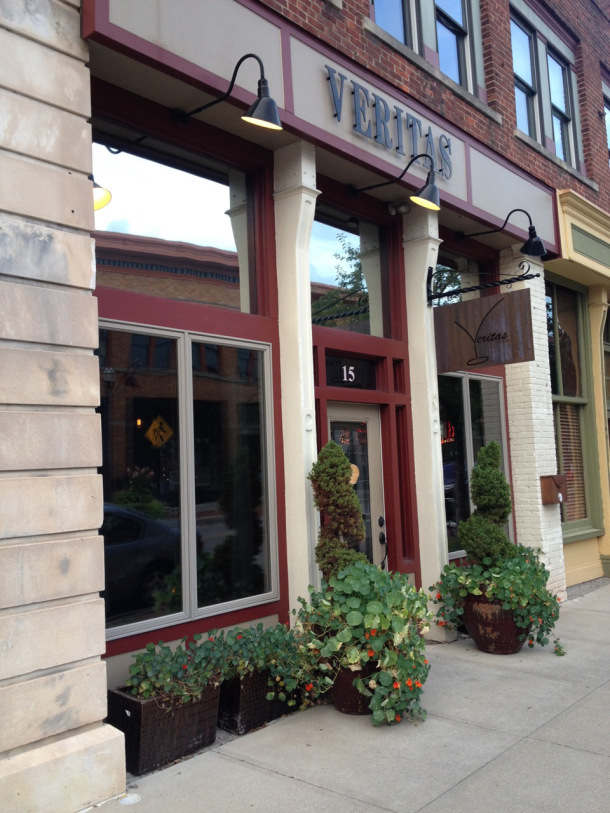 If you’ve kept up with central Ohio restaurant news over the past year, you’ve certainly heard of Veritas Tavern. Its culinary team, its bartenders, and its menu have garnered a lot of attention for many reasons, not the least of which is their forays into molecular gastronomy. It isn’t often that I run into this type of food a.) in writing about breakfast, and b.) really anywhere in our area, so there was that simultaneous apprehension and excitement about finally making it up to Veritas.

Maybe for you, the phrase “molecular gastronomy” is intimidating or confusing. It might connote expensive and unidentifiable dishes, small portions, and snobby service. But don’t be fooled: Veritas and its staff are incredibly warm and welcoming, and the meal was one of the best we’ve ever had, an incredible dose of creative comfort food. Like all good things, it was about process over product. 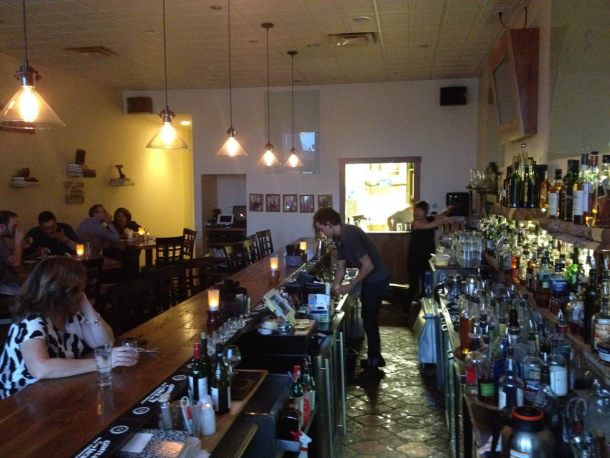 Mrs. Bfast w/Nick and I made our trek to Delaware for an early anniversary dinner. Veritas is located in the heart of Delaware on Winter Street. The space is intimate: five tables and maybe a dozen seats around the bar. 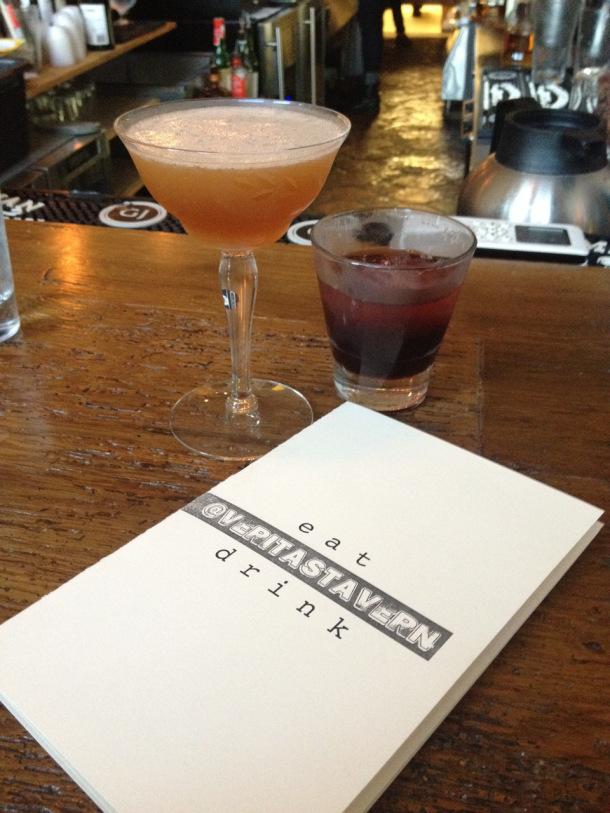 Veritas has not just made a name for itself with creative food, but with the cocktail menu, too. We sampled a couple things both on and off the menu. Pictured above are two menu items: the Bourbon Snap (bourbon + bitters + simply syrup + Snap, a gingerbread liqueur) and the Blackberry Rye Shrub (shrub, a vinegar syrup + a rye syrup). I’m no expert on cocktails – you won’t be seeing Cocktails With Nick anytime soon – but both of these were simply delicious. Rich, not overly sweet, balanced, perfect for sipping with your food. 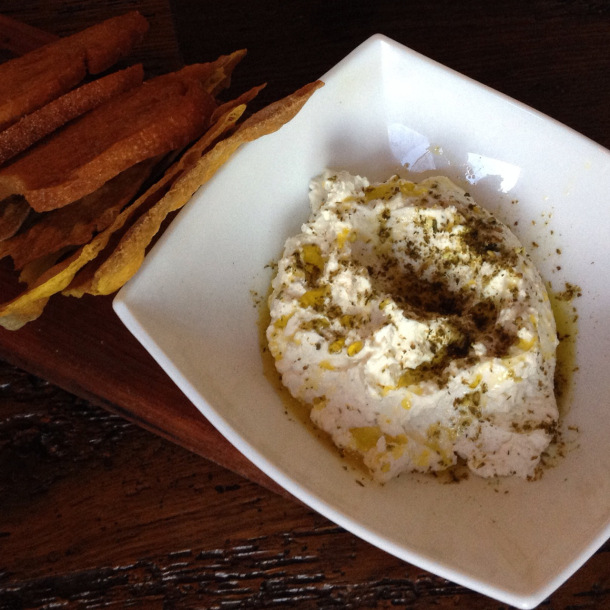 The menu is divided into Before, Small Plates, and After. “Before” refers essentially to appetizers, and we tried two. First, the feta dip with cucumbers and flat bread. The generous portion of dip was dense and creamy, with ample seasoning and olive oil. 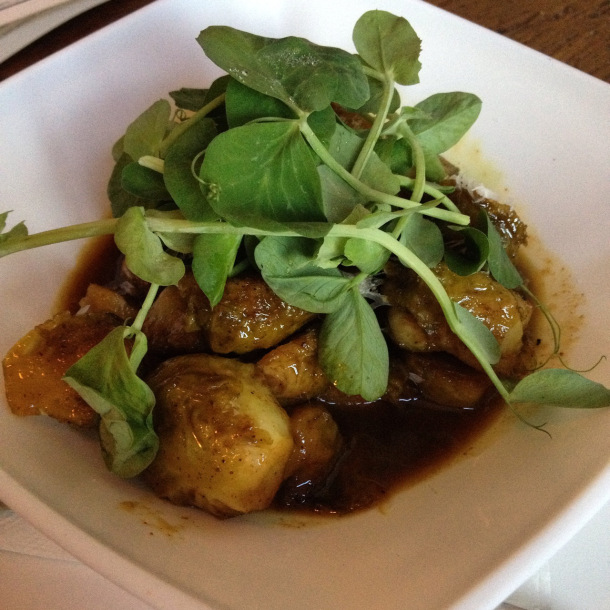 Next up: Brussels sprouts. I’ve always loved Brussels sprouts – I never understand why they’re treated like a default dislike for children. But these completely redefined the vegetable for me. They were sous-vide (a cooking technique in which the food is sealed in a plastic bag and immersed in warm water) in a rich array of spices. The sprouts were tender, and I couldn’t even tell you half the spices in it, but it was so rich we ordered bread to mop it all up. 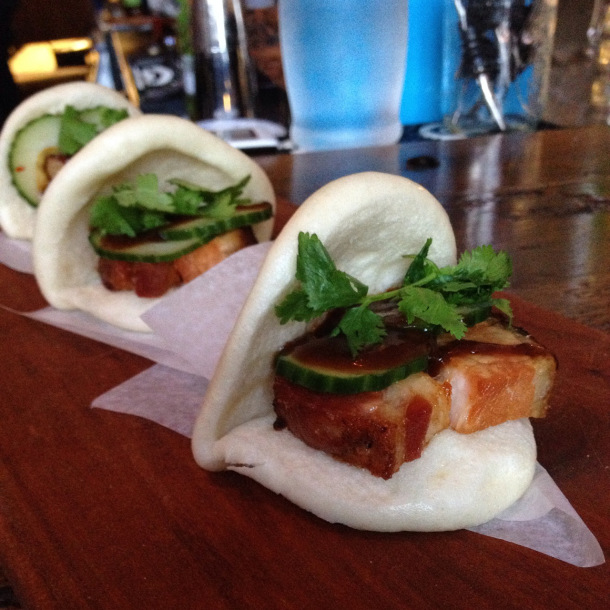 We then moved onto the small plates. This menu features salads, fish, beef, pork, risotto. Small plates, yes, but they’re excellent for sharing, which focuses you on the communal experience of dining. We started with the pork belly: three steamed buns with crispy chunks of pork belly, cucumber, a sprig of cilantro, and a sweet hoisin sauce. They were as good as we’ve ever had. 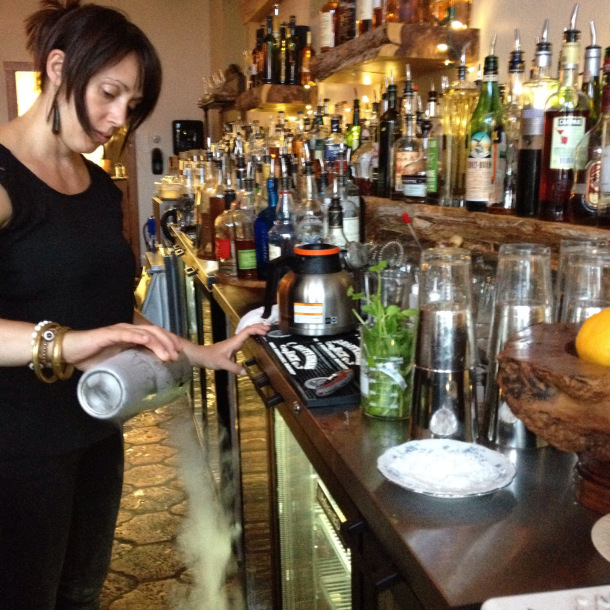 Don’t forget the cocktails! After our first round, we let our bartender lead the way with some suggestions. Mrs. Bfast w/Nick loves a good mojito, and the bartender Nicole Hollerman crafted an amazing one. Before muddling the mint, she shook it in a glass with liquid nitrogen. The nitrogen froze the mint leaves, so we she muddled them, they essentially shattered into a fine powder. 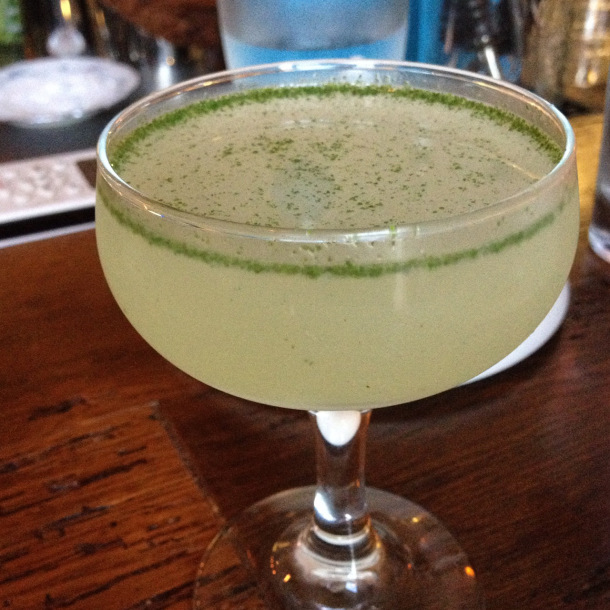 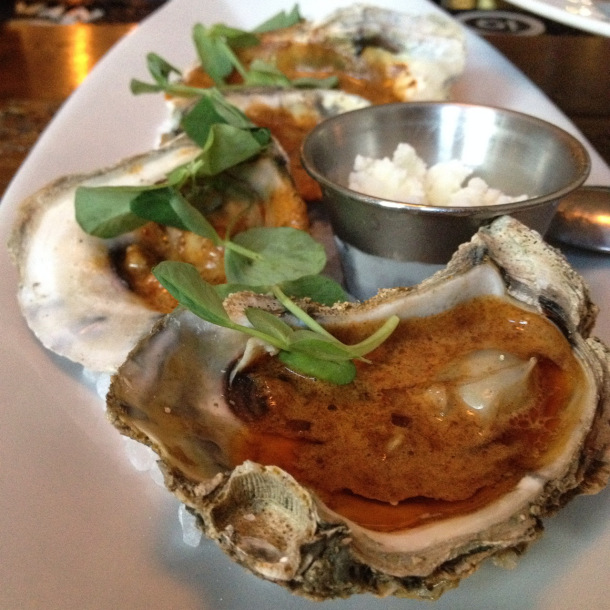 Next up: roasted oysters. Served on the half shell with a spicy chili butter. The lemon juice is frozen into tiny cubes, so we sprinkled them like a course salt over the oysters. Simply delicious. 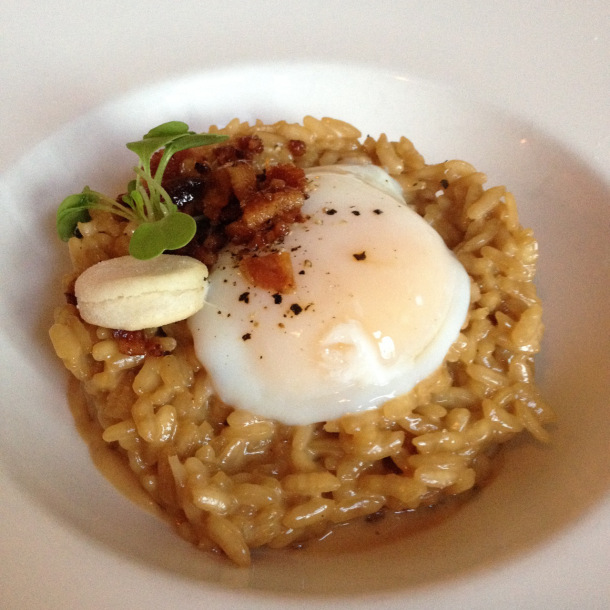 And then the piece de resistance: the bacon risotto. The name is fitting, but it makes it sound more simple than it really is. I know what you’re thinking: bacon risotto means just a salty risotto. But this is so, so much more than that. The base is a perfectly cooked risotto mixed with a white cheddar. There’s a small crumbling of bacon – just the right amount to impart flavor without overwhelming – and a tiny, tiny biscuit. 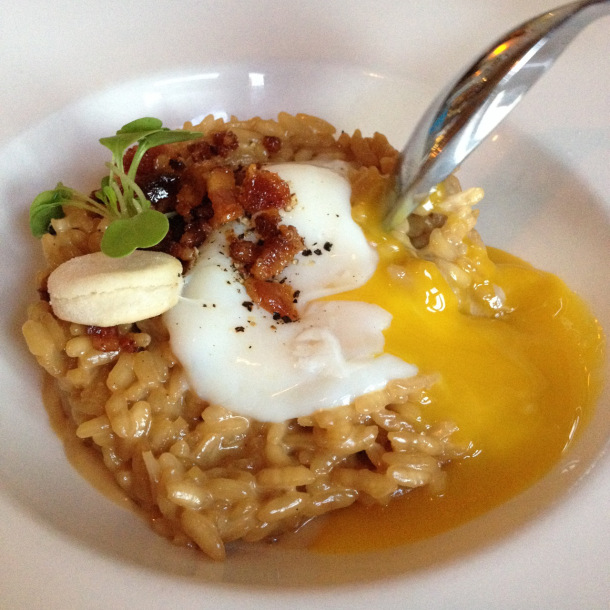 But the really remarkable thing is the 62.5 degree egg. The egg is sous-vide at 62.5 degrees Celsius for about 45 minutes. Why such a specific temperature? It’s the temperature at which the egg white and yolk are the same texture. And that texture is wonderfully, wonderfully creamy. When we broke it over the risotto, it spread through the dish and created this amazingly creamy texture. I just can’t quite describe it, but it’s perfectly balanced and flavorful. This is easily up there with one of the best things I’ve ever eaten. It’s one of those dishes that makes you slow down to scoop every bite and savor it. 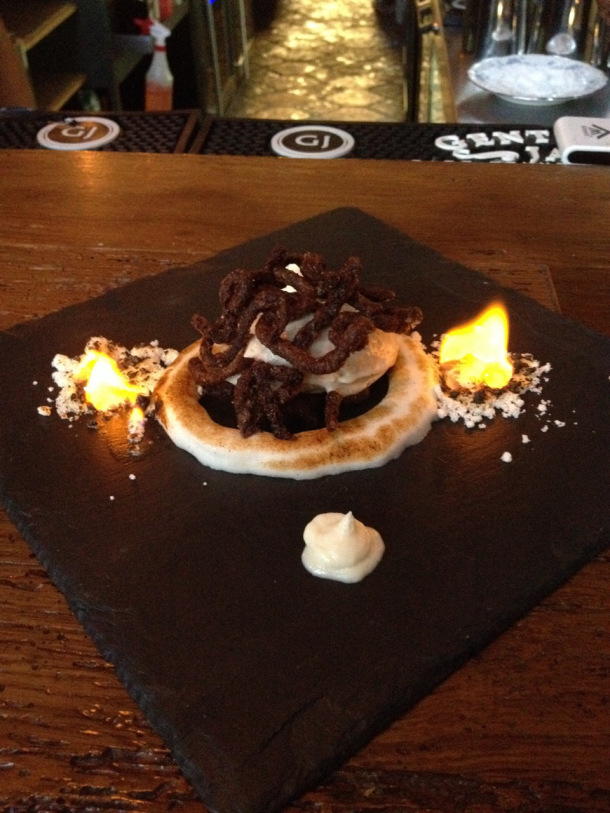 We finished the meal with a choice from the After menu: the Campfire, a deconstructed take on s’mores. Graham cracker ice cream, chocolate, marshmallow, and a flaming bacon powder (yes, bacon powder). The charred powder recreates the flavor of a marshmallow charred over a campfire. 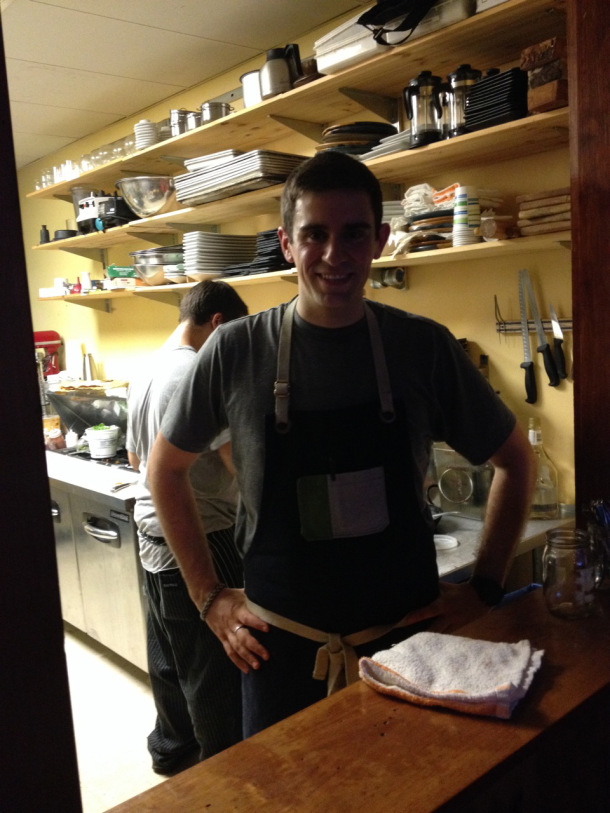 Our visit to Veritas coincided with the last week of Chef Silas Caeton. He was since moved on from Veritas for other pursuits, but the kitchen team at Veritas is as strong as ever, with owner Josh Dalton in the lead.

Well, what an incredible experience. Welcoming, creative, comfortable, exciting. Easily, easily worth the drive to Delaware up from central Columbus. Veritas certainly seems worthy of being called one of the best restaurants in the area.

Filed Under: Beyond
Tagged With: beyond breakfast, Delaware, gluten free, Ohio