Travel: A Day in Cincinnati 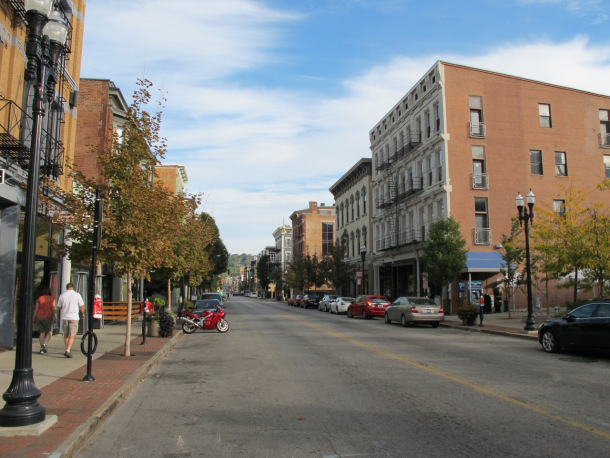 My brothers and I gather together whenever one of us turns thirty. For my birthday, we ended up in Cleveland doing a brewery tour. For another, we visited a bourbon distillery in Frankfort, Kentucky (I’m starting to see a theme here). So for our youngest brother’s birthday this year, we spent the day in Cincinnati, mostly in Over-the-Rhine. After breakfast at Taste of Belgium and second breakfast at Holtman’s Donuts, we headed out on the Ultimate Underground tour through American Legacy Tours. 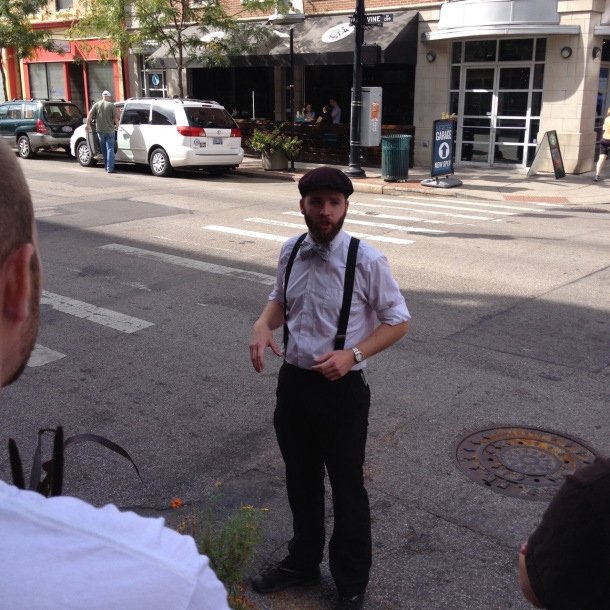 Our tour guide John led us around the heart of Over-the-Rhine. He was incredibly knowledgeable, having led the tour upwards of 1300 times. He also seemed to know EVERYONE in the neighborhood. He’d shout a hello whenever someone would ride by on a bike, or high-five passersby. 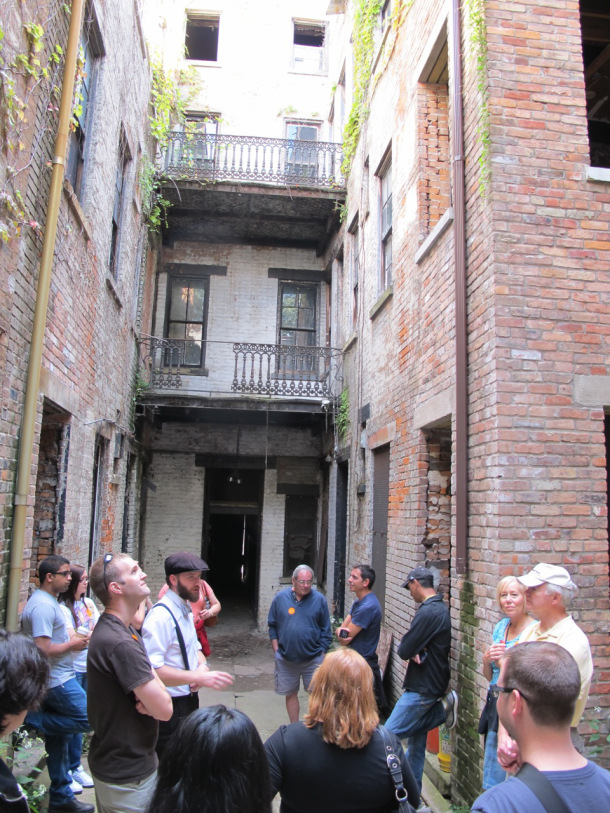 Over-the-Rhine is fascinating from many perspectives. It’s one of the largest historic districts in the U.S., and is a great example of urban renewal. John discussed the history of the neighborhood and pointed out the stories behind particular buildings. He took us into a few buildings – all of which were locked up from public view – that used to be important restaurants, theatres, and homes. In the building pictured above, he walked us through the structure to the courtyard in the middle, and explained how the neighborhood is being renovated without displacing current residents. 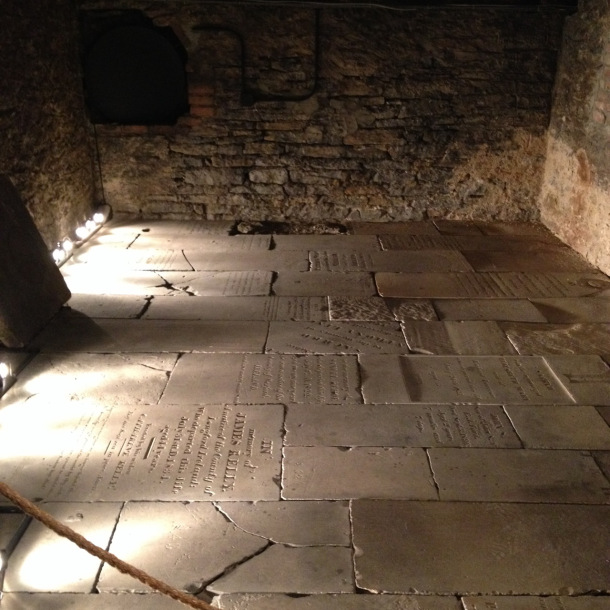 He took us further north to St. Francis Church, all the way to underground crypts where past parishioners are buried. As the church was renovated over the years, some of the oldest parishioners were reburied in the crypts, and their gravestones used to create the floor. 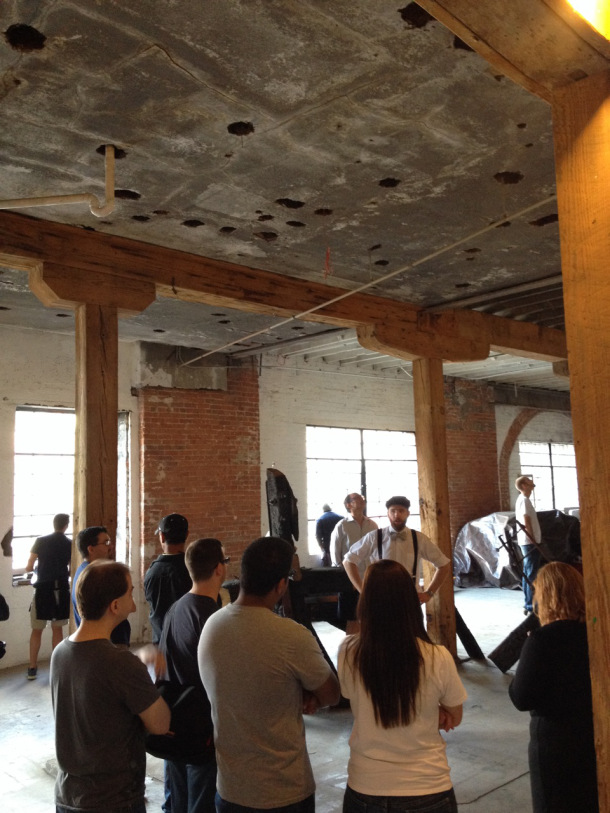 One of the key pieces of the tour was one of many buildings that once functioned as a brewery. The upper levels are now apartments, but on the main floor John pointed out the old cork wood ceilings and floors, used as insulation for the brewery’s icehouses. 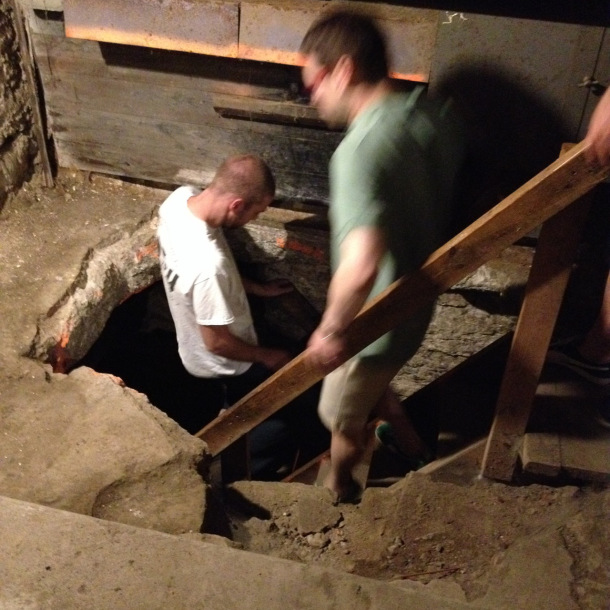 And then the piece de resistance of the tour. First John took us down to the basement of the building. And then he took us through this hole jack-hammered in the ground. Apparently the building’s owner knew the old brewery had had underground storage (this is all pre-refridgeration, when underground spaces were necessary for storing and fermenting beer). Once proper refridgeration came along, these storage tunnels were unnecessary, so they were filled in with garbage: dirt, rock, metal, glass, you name it. The building’s current owner found old blueprints, which showed him where to find an access point. So he cracked open the floor and discovered… 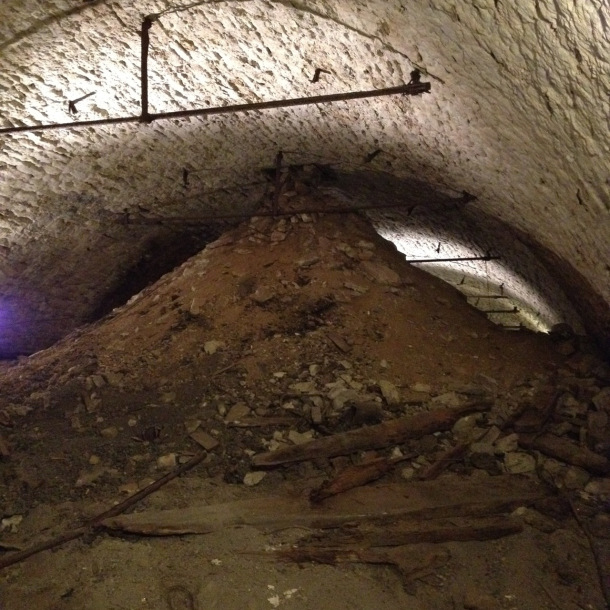 …this. Room after room and tunnel after tunnel. Over the years they’ve dug out some of the tunnels, but many of them still remain closed up.

The tunnels were previously cooled further by running chilled water through copper pipes that hung along the ceiling. Many of Over-the-Rhine’s previous inhabitants were German, and so they produced a lot of lagers (‘lager’ is German for “to store,” essentially) which need much cooler temperatures than the consistent 58 degrees underground. Here’s a panoramic of the group gathered in one tunnel. 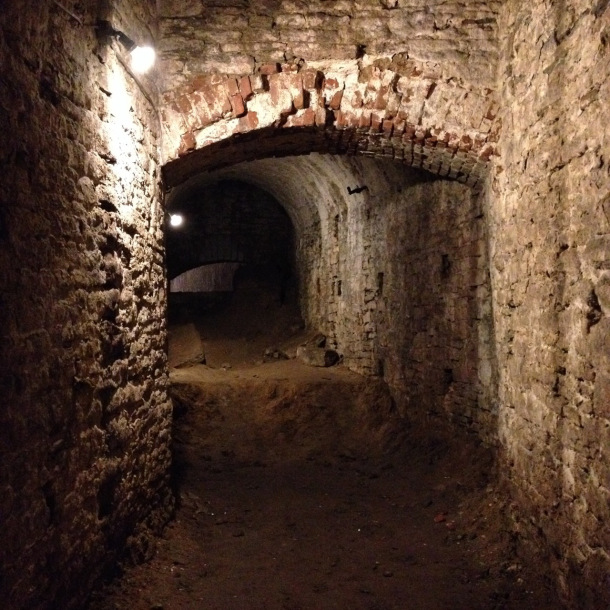 There’s a creepy and delightful sense of history in these tunnels. 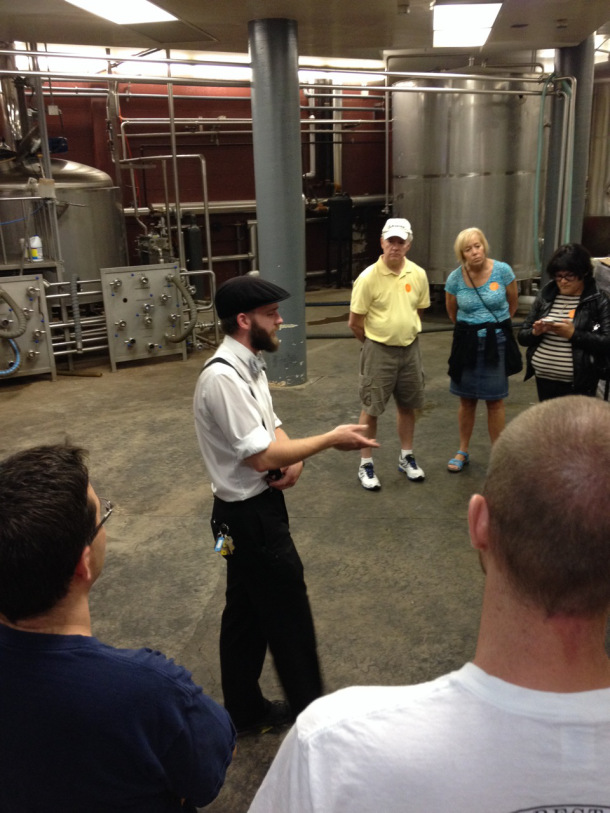 We finished the tour with a stop at Christian Moerlein brewery, where we discussed the brewing process and the history of brewing in Over-the-Rhine. 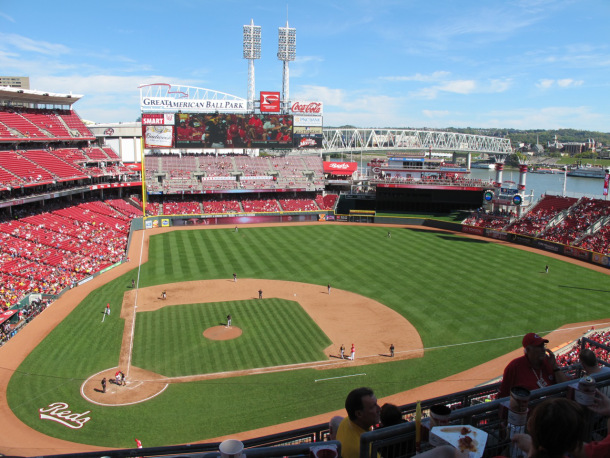 When the tour wrapped up, we hopped a bus down to Great American Ballpark to catch the Reds playing the Pirates. Our seats in the upper deck only cost $7.50 each, plus they were shaded and you couldn’t beat the view. Highlights included seeing a few home runs, watching three quick strikeouts from Aroldis Chapman, fastest pitcher in Major League Baseball, and then finishing off the game with a walk-off grand slam in the 10th inning (the Reds won 10-6). 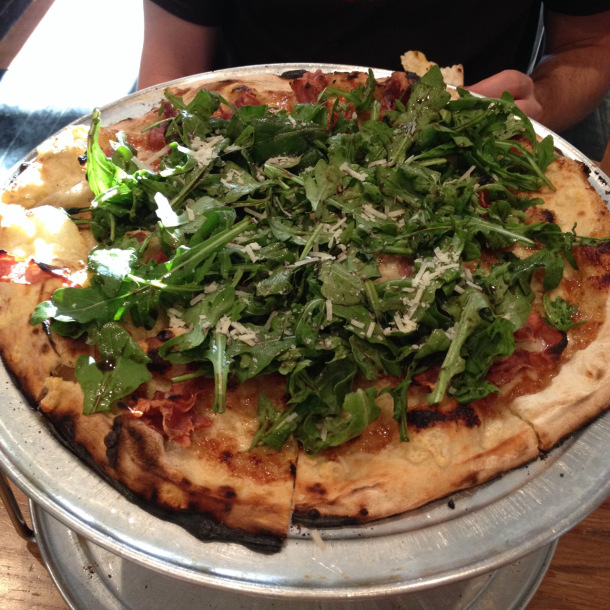 Post-game we strolled back up to Over-the-Rhine. Initially we were going to get hot dogs at Senate, but with a long wait there, we opted for A Tavola instead. It proved to be a very wise decision. We split two crispy, thin-crusted pizza – both were excellent. First, there was the fig & prosciutto, with fig jam, prosciutto, fontina cheese, and arugula tossed with balsamic vinegar. 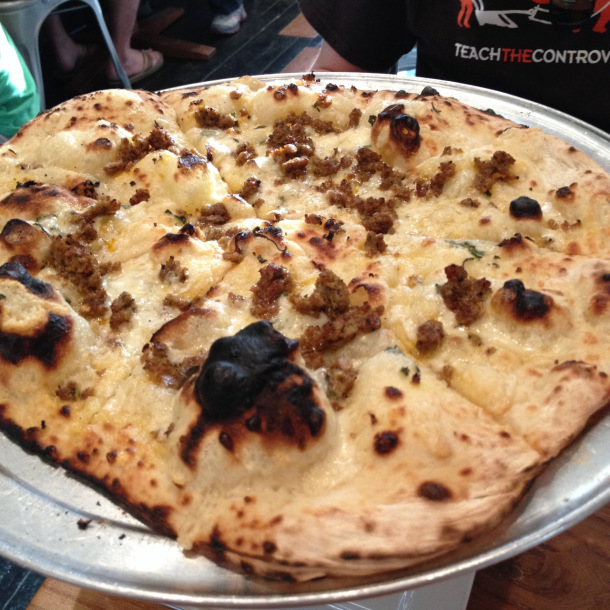 Then there was the sausage and sage, with – you guessed it – sausage, sage, and fontina. (I also enjoyed a pint of Mad Tree Brewing’s Lift, a deliciously sweet kolsch.)

Our final stop of the day – and one I’ve been waiting to visit for quite some time – was Rhinegeist Brewery. I’ve sampled their beers in Columbus, but seeing their brewery is something else altogether. The entryway is a small door off Elm Street. You feel like you’re climbing a back stairway to nowhere, when suddenly the door opens into a giant warehouse space. 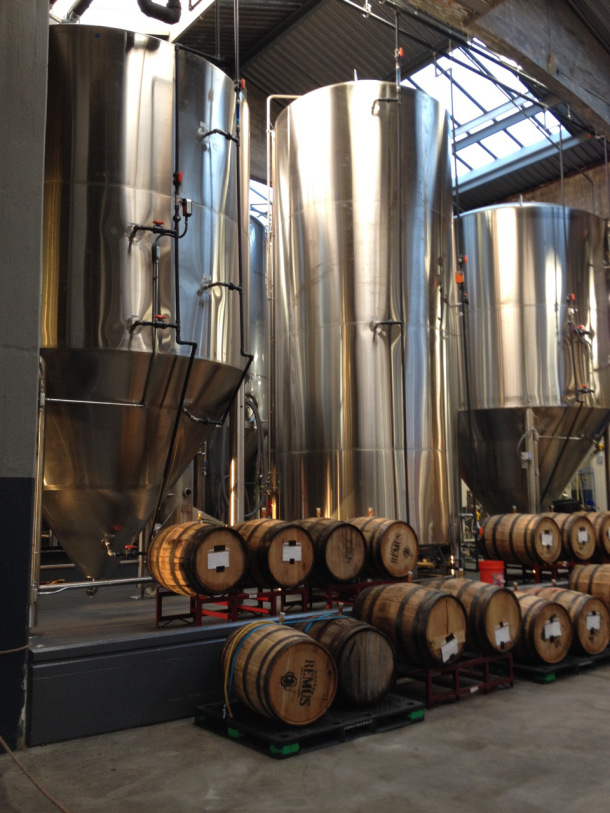 At one end, under the tall ceilings, is the brewing facility itself. 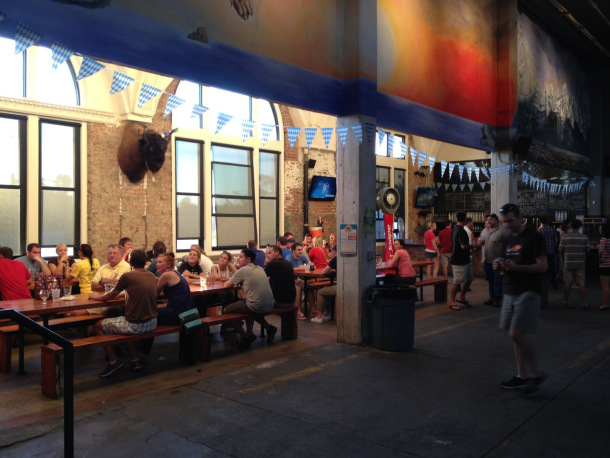 Near the brewery itself, in a large alcove, is the bar and rows of tables. 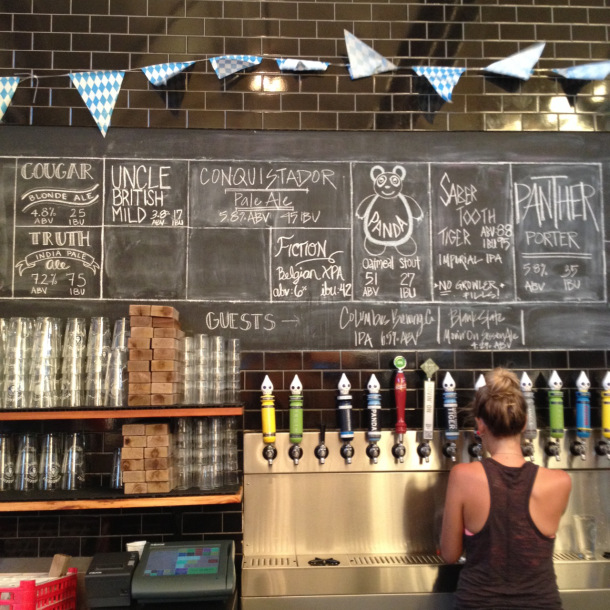 They’ve got a pretty wide selection of beers. 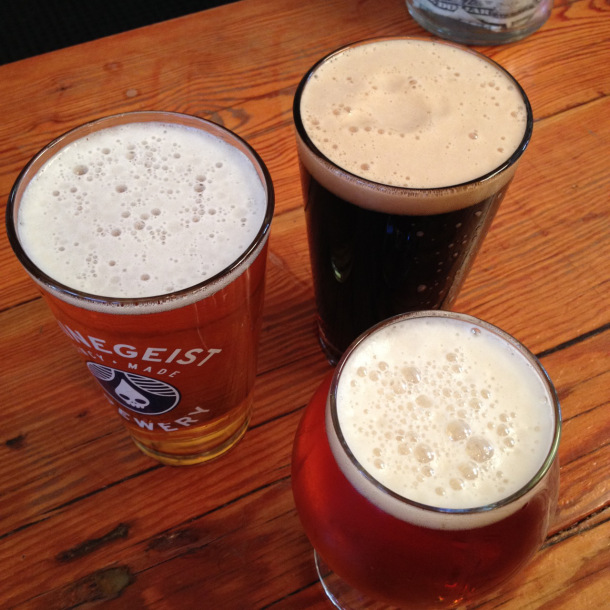 I haven’t had a bad beer from Rhinegeist, but I’m partial to their Panther Porter and Saber Tooth Tiger imperial IPA. 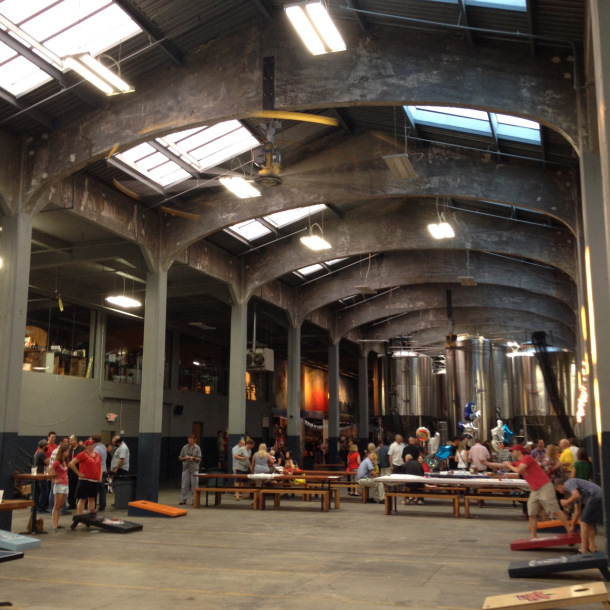 The rest of Rhinegeist’s massive space is open for more tables and rows of corn hole and ping pong tables. I’m sure they’ll fill this in with brewing equipment soon enough, but for now they’re certainly not wasting it.

Rhinegeist was a very fitting end to a great day in Cincinnati. Even just staying in Over-the-Rhine gave us more than enough to do, and a large list of places to try when we next return.