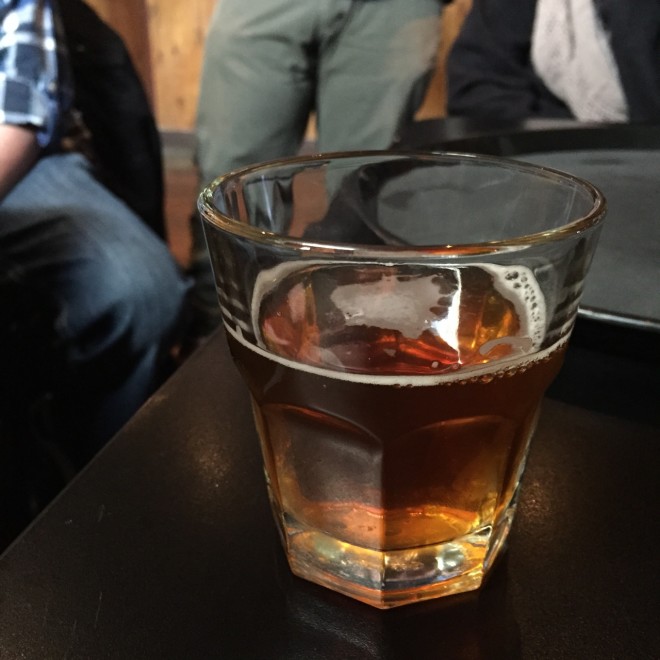 Fair warning: this post is mostly pictures of beer and pizza. If that’s your thing, then you need join up with the Columbus Brew Adventures Pitchers & Pizza tour soon. I’ve been leading tours off and on for CBA over the past year, but this tour was brand new to me. Mrs. Bfast w/Nick and I had the opportunity to tag along on the latest tour.

The title of the tour says it all: Jim takes you around to four pizza places to sample pies paired with beers. He’s a leading expert in both areas, so with him as your guide you get extensive history about Columbus pizza styles and local brews. 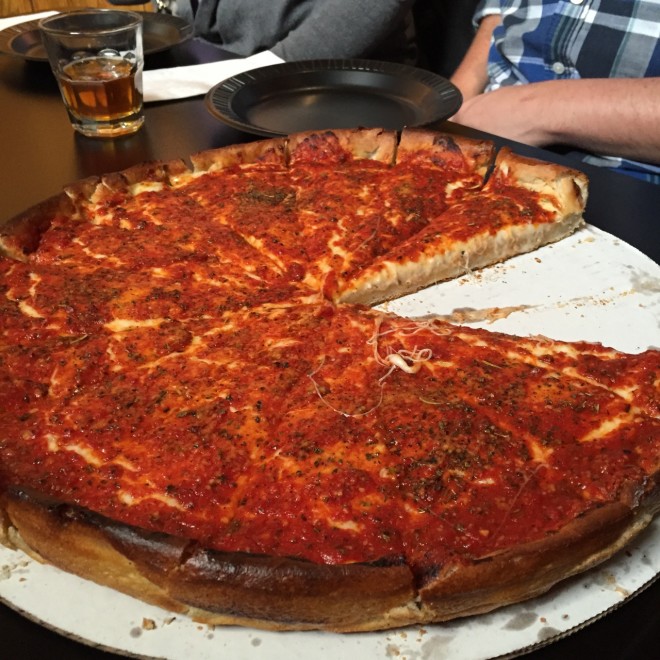 The trip began at Meister’s Bar in Grandview. Meister’s itself is fairly new, although the building has been a bar for years. Being on Chambers Road brought back memories of The Rose & Thistle, a now-gone basement pub where Mrs. Bfast w/Nick and I spent many a night in grad school avoiding work over pints of cider.

But on to Meister’s… The bar has been reborn in recent years. It still retains its dive bar status, but the food and beer have been elevated slightly. Most notably, they’re serving Chicago-style pizza. Maybe its my midwest upbringing, but I’ve always been partial to Chicago-style over New York-style. I’ve never turned down a good pizza, mind you, but I love the thick crust and dense layering of Chicago-style. We sipped Four String’s Brass Knuckle pale ale while we dined. 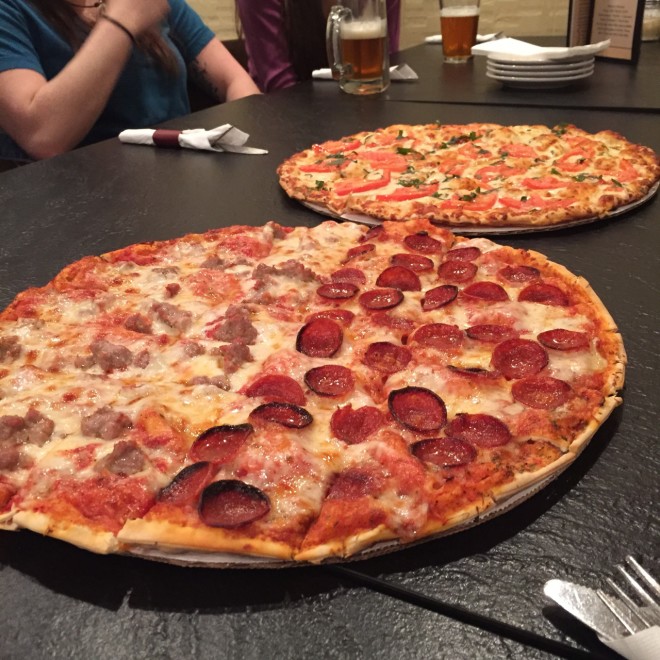 The next stop took us to Iacono’s, a family-owned joint that’s been around for decades. We’ve clearly been giving ourselves short shrift by ignoring this spot for years. They serve what’s known as Columbus-style pizza (edge-to-edge toppings, thin crust, cut into squares). They serve a pizza buffet during weekday lunches and Tuesday nights, and a pasta buffet Monday nights. 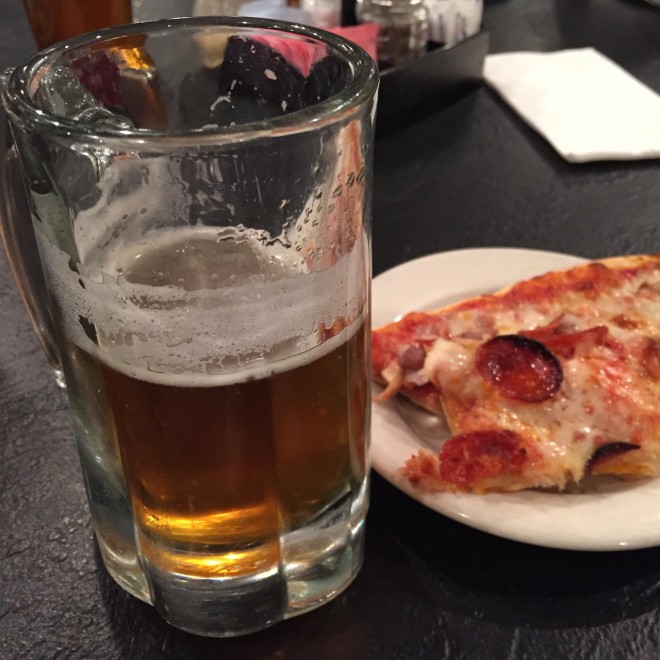 I can attest their pizza goes well with Columbus Brewing Company’s IPA. 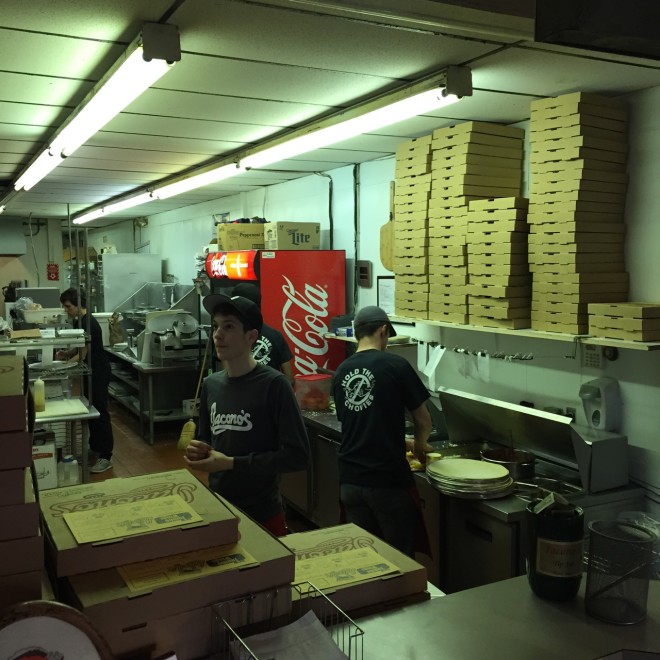 There’s a lovely and inviting smell to classic pizzerias. And the signature look of pizza boxes piled high. 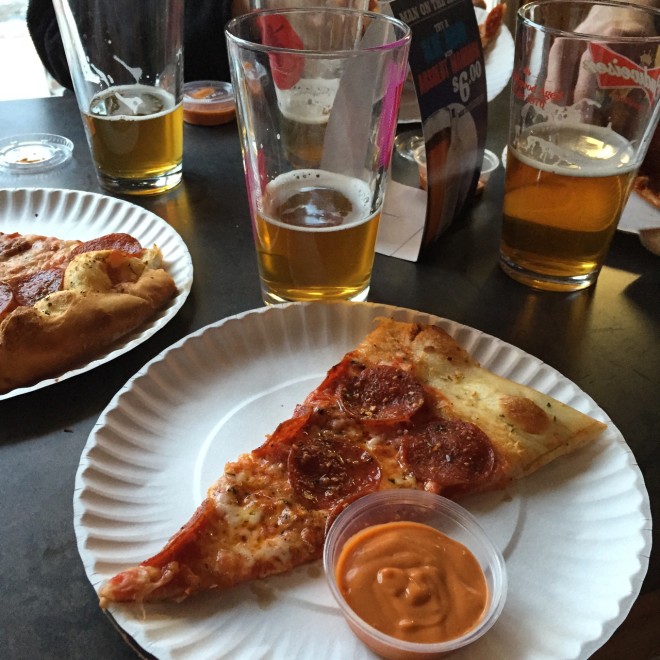 Our trip then took us to Clintonville, where we headed to Ledo’s bar to enjoy wedges of Mikey’s Late Night Slice, Slut Sauce (now going under the more family-friendly moniker “Infamous Sauce”), and North High Brewing’s pale ale. 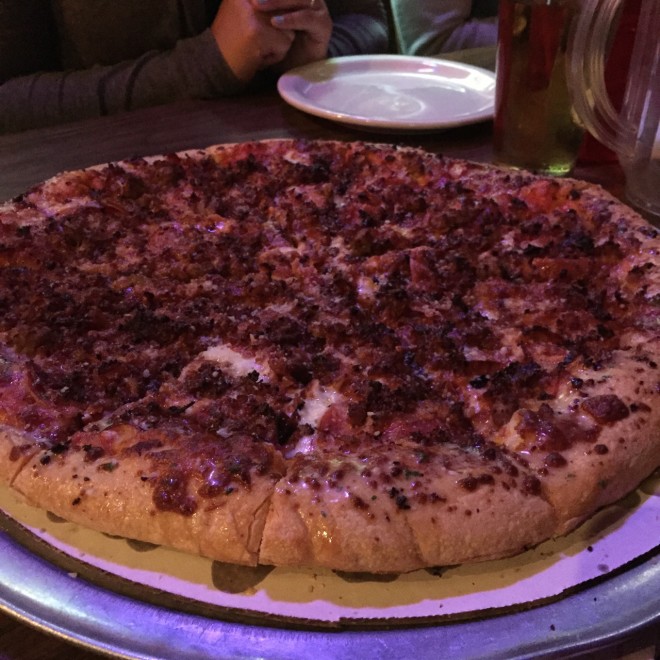 We ended the night across the street at Hounddog’s. I’ll be honest here: even after eight years living in Clintonville, we had never been IN Hounddog’s. Delivery, yes, but never a sit-down experience. I think years of horror stories about poor service have kept us away, but clearly we’ve been missing out. Jim was full of stories about the pizzeria, its history, and even the crazy decor. The pizzas were great – Jim gave us the option to try some vegetarian pies here – and they went well with Great Lakes’ High Striker Belgian pale ale.

Interested in the tour? Visit columbusbrewadventures.com for tickets and info. There are open seats on the Pitchers & Pizza tour for April, May, and June!

(Full disclosure, in case you missed it: I lead tours for CBA, and we were invited on this trip.)