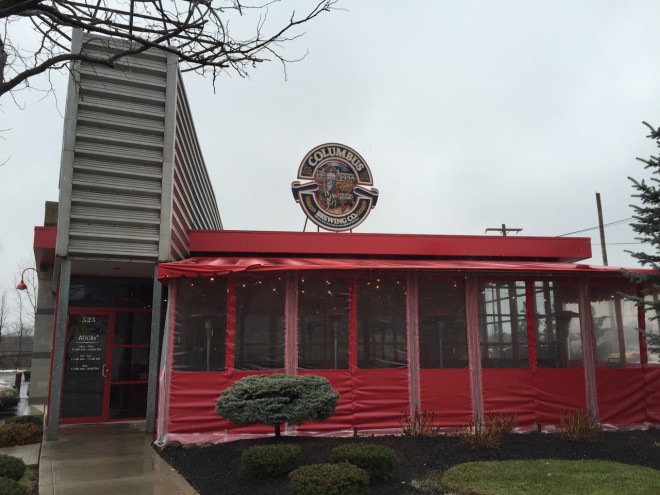 This past February I reviewed CBC’s brunch for the Columbus Dispatch. You can read my review of it here. While there, we took our own photos and wanted to share some of our thoughts. So read on and enjoy! 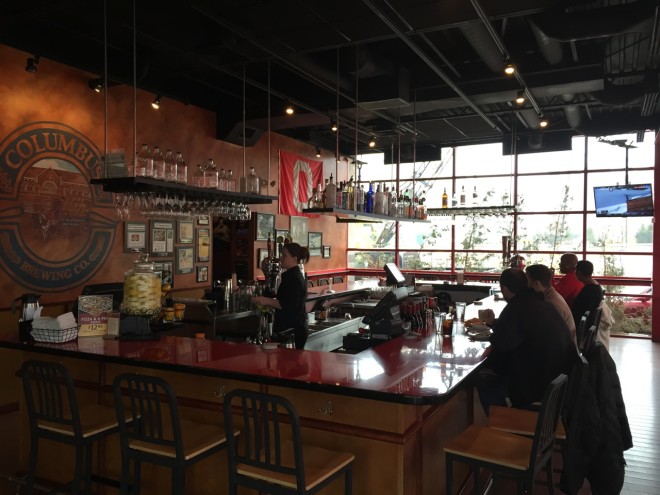 As time goes on, I’m finding that brunch and beer are synonymous. This is probably just me, because I’m a big fan of both and am looking for any excuse to combine the two. But I think it’s also because a.) more beer-centric restaurants are getting into the brunch game, and b.) because more restaurants in general are serving good beer. 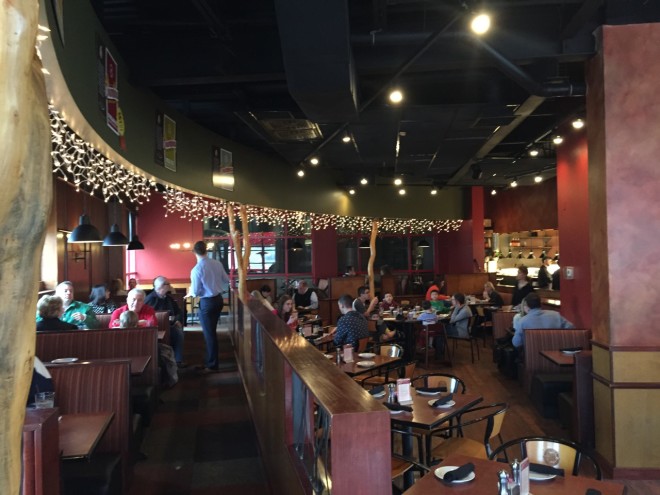 And Columbus Brewing Company Restaurant is a prime example of this. The brewpub serves good beer, and they’ve been managing a solid menu of comfortable pub classics. 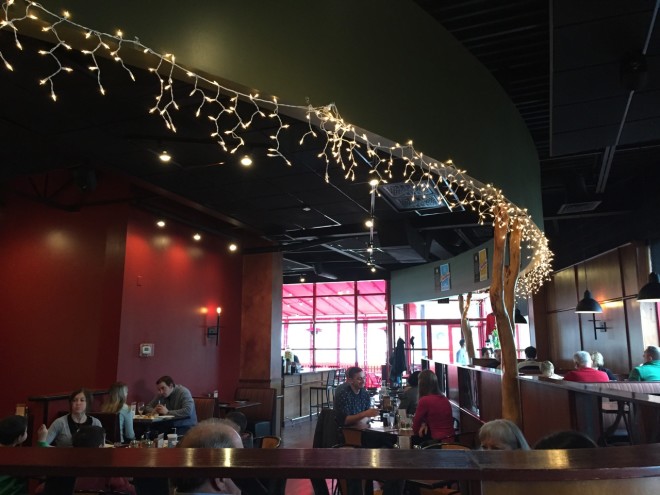 If you’ve never been to the Columbus Brewing Company Restaurant, you need to get yourself there. The location is a bit odd, down Short Street in the Brewery District behind Kroger, although it’s becoming less odd as the District is getting revitalized around it. And currently it’s the only brewery operating in the Brewery District. 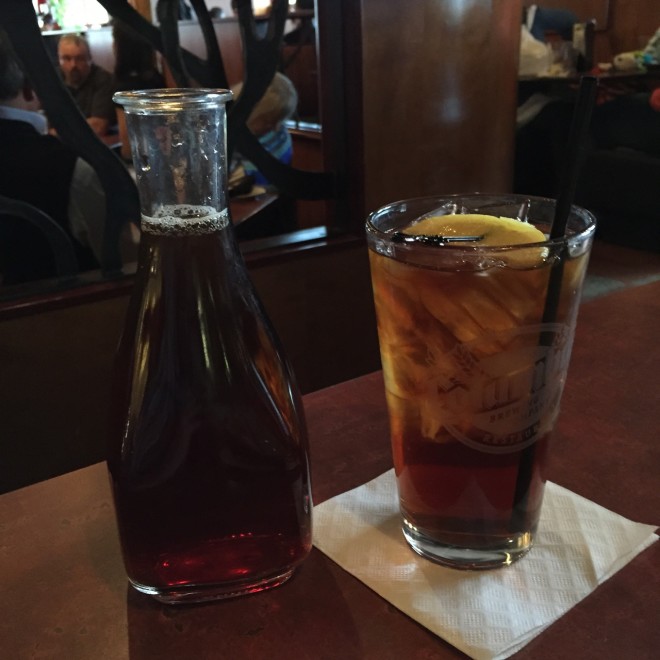 Brunch started with beverages, of course. They serve an excellent iced tea, presented in your own little carafe. 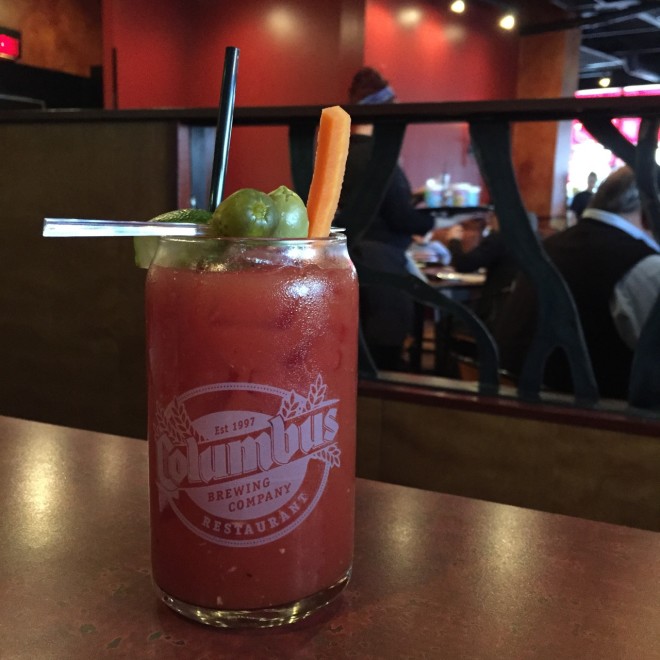 The brunch menu features a small list of Bloody Marys of varying spice and heat levels. This is their standard CBC Mary, which is on point. Love the serving glass, too. 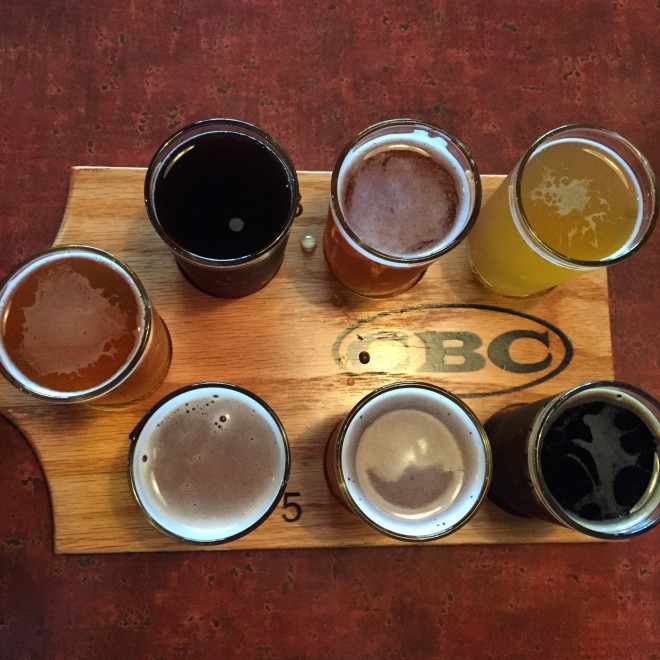 You can order pints of beer, of course, with house and guests taps featured. Or if you’re like me, you want to try a bit of everything. It’s really hard to beat their beer sampler: seven generous pours for $10. 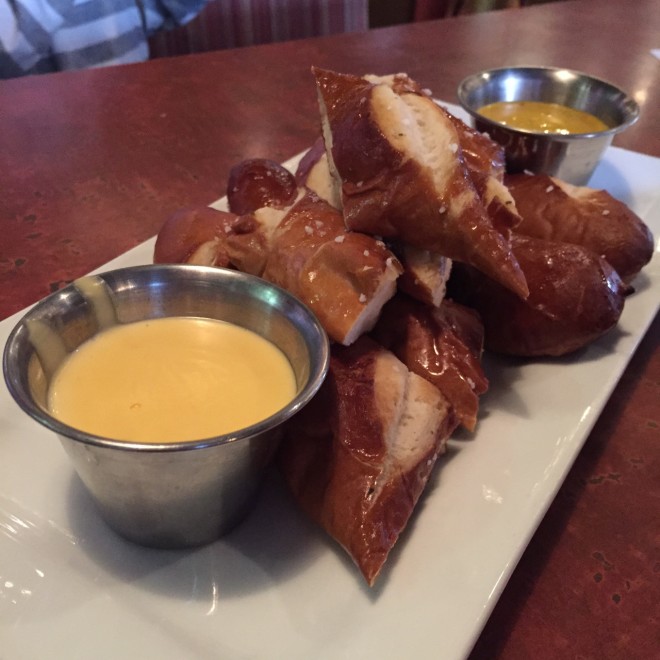 The menu features some great shareable appetizers; our favorite are the pretzel bread. They’re made in-house, come out soft and piping hot, and are served with mustard (made with house beer) and beer cheese. 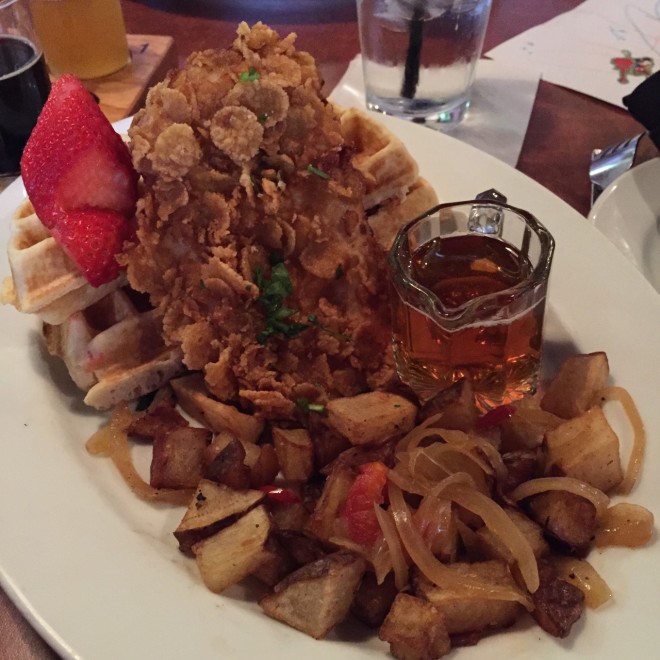 The chicken and waffles were not the best I’ve ever had, but they were still very enjoyable. The chicken is given a cornflake breading, which is crispy but needed a little more seasoning. Still: very nice waffles, good side of potatoes. 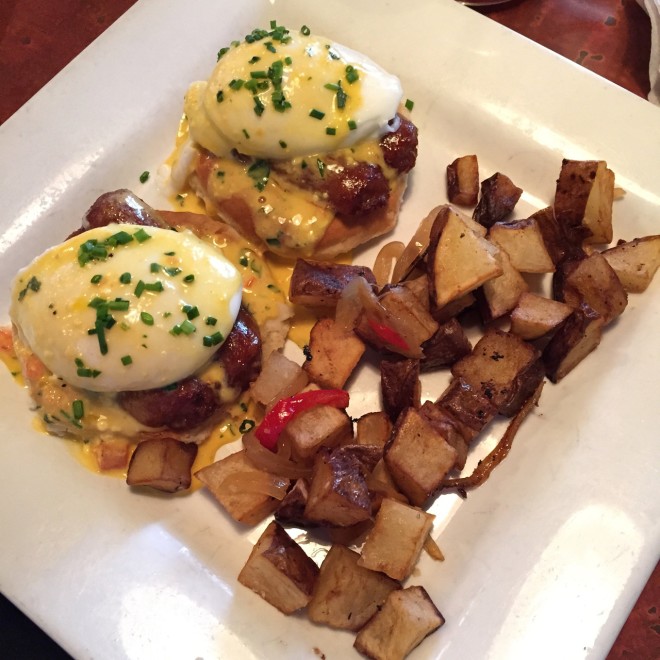 The Brewer’s Benedict is a solid dish: served on a biscuit with house-made sausage and a tomato hollandaise. There’s a good amount of hollandaise, the eggs were poached nicely, and there’s a side of the house potatoes again. 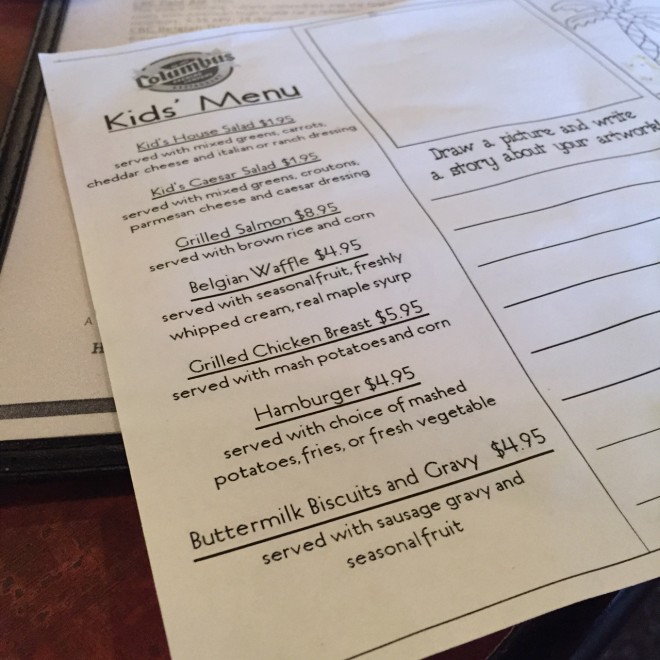 Restaurants have really stepped up their game when it comes to kid’s menus. There’s no reason kids shouldn’t be able to experience the same quality dishes as the adults. It doesn’t all have to be chicken fingers and fries. CBC scores with their menu, from real brunch items like waffles or biscuits and gravy, to healthy choices like salads, grilled chicken, and grilled salmon! You don’t always see that on menus that can be colored with crayon. 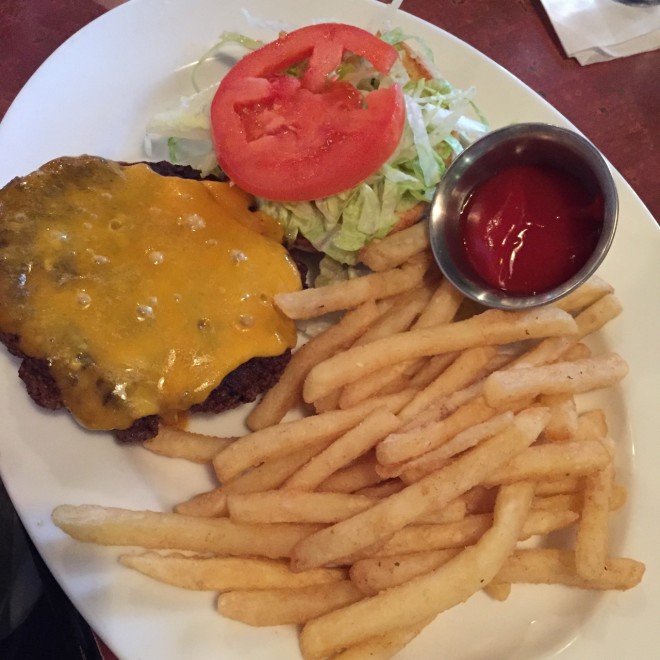 Our boys chose a cheeseburger and fries. 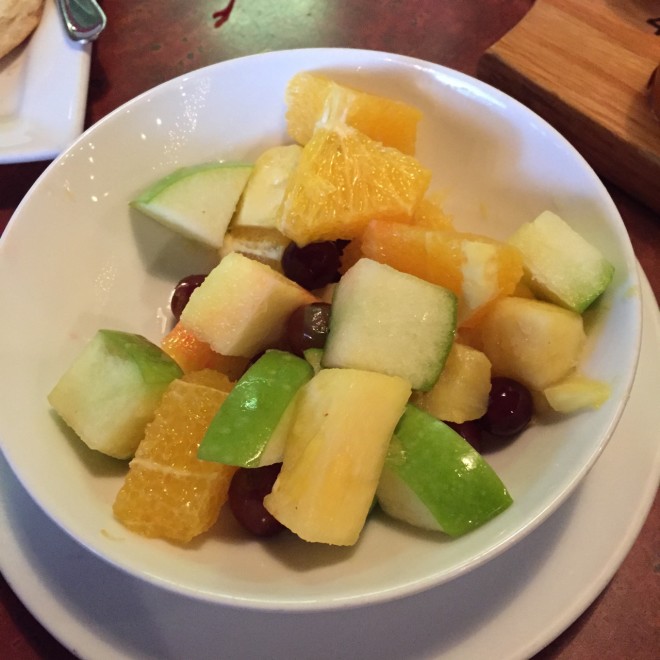 Big side of fruit! 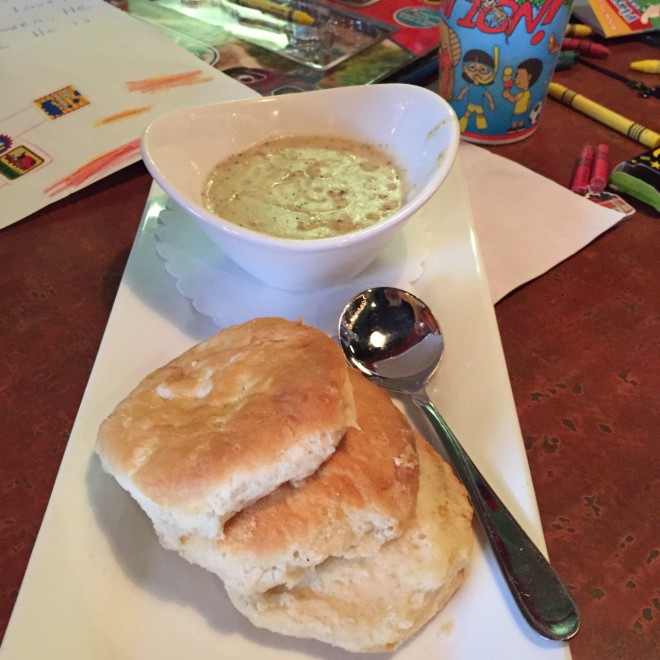 And the biscuits and gravy. Good sized portions – we had leftovers – and all nicely presented.

If you’re busy making a brunch tour of Columbus, I’d add the CBC Restaurant to your list. We’ve barely scratched the surface of the menu, which goes on to include jambalaya, waffles with Nutella, breakfast sliders – lots of fun stuff.

This meal was covered by the Dispatch as part of a review. Photos and opinions here are my own.