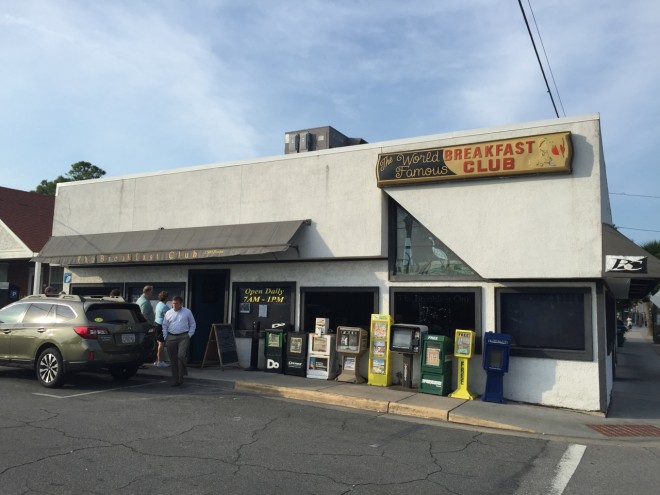 Even though I haven’t been to The Breakfast Club in about 18 years, visiting there again feels like a bit of a homecoming. Why? Well, two reasons:

1. The Breakfast Club was one of the places I learned to love breakfast. I can count it amongst a handful of restaurants that offered memorable experiences of going to breakfast. I remember – even from decades ago – the anticipation of going to breakfast when vacationing on Tybee Island. What stands out especially is my love for the waffles and hash browns.

2. Breakfast Club was also featured in the Breakfast Special documentary on PBS. I didn’t know that Rick Sebak was going to shoot there (he went to Tybee after he filmed in Columbus), but it was a delight to see an old favorite featured in the same program. 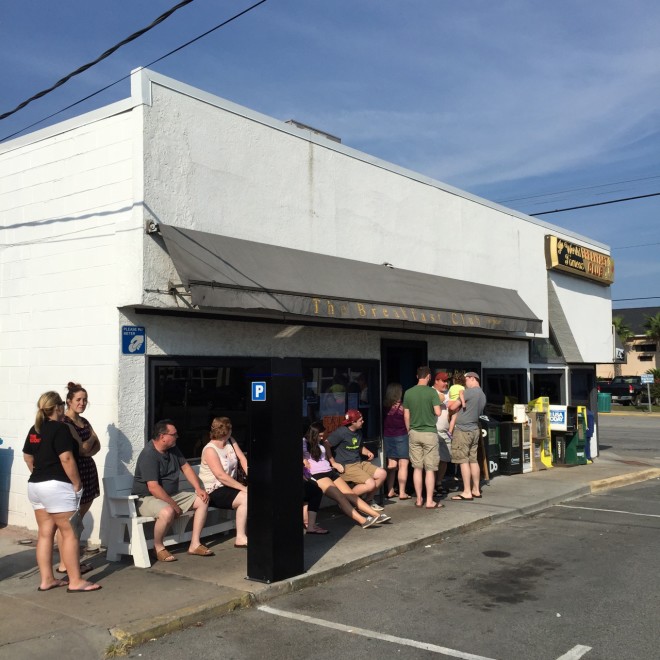 So in planning a family trip to Tybee Island, Breakfast Club was automatically included in the itinerary… at least twice.

Breakfast Club is that type of place that always has a following. Locals gather regularly, vacationers seek it out as a feature of their trips. The place runs like a well-oiled machine, so you need to know how the process works. First, expect a line. Things move quickly at Breakfast Club (don’t hang around when you’re done eating), but waiting is often part of the game. Line up outside, and server will poke his/her head out once in a while to check on your group size (your whole group needs to be present to get seated). 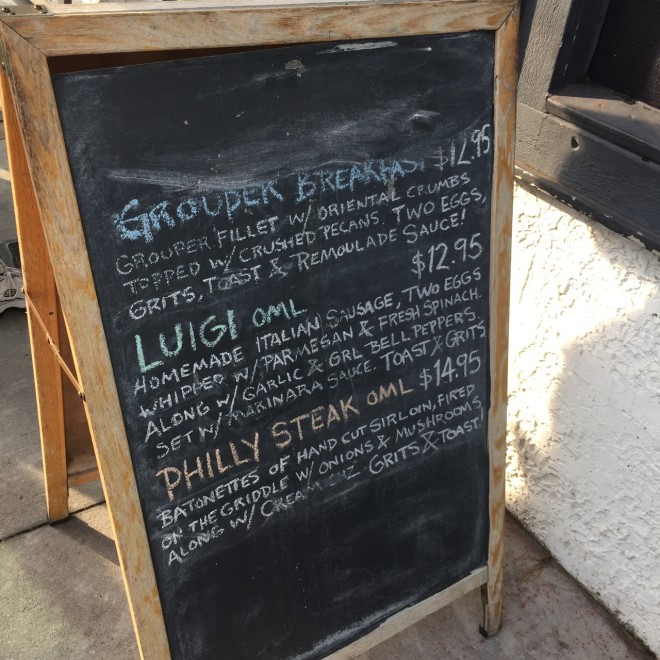 While you wait, you can eye the specials on the board. 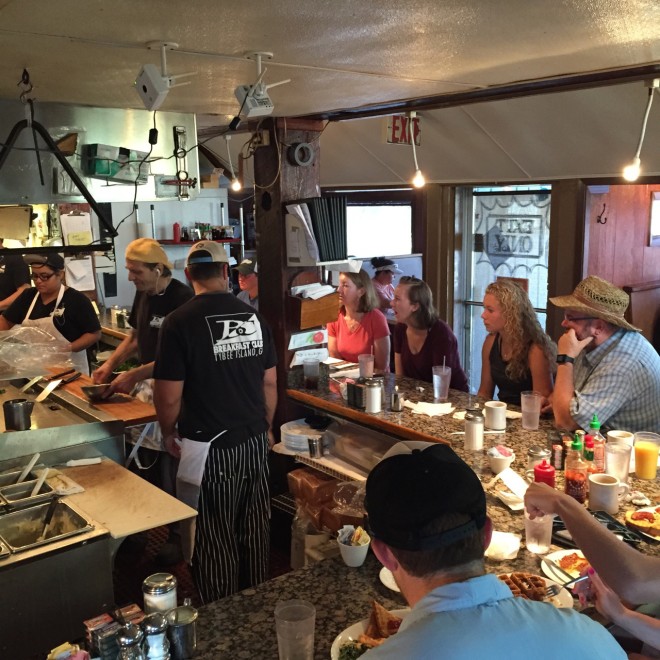 Once you’re inside, you’ll be directed to one of two rooms. The front room is my preferred seating. That’s where you’ll find the counter, booths, and kitchen. Half the fun is watching the kitchen at work. 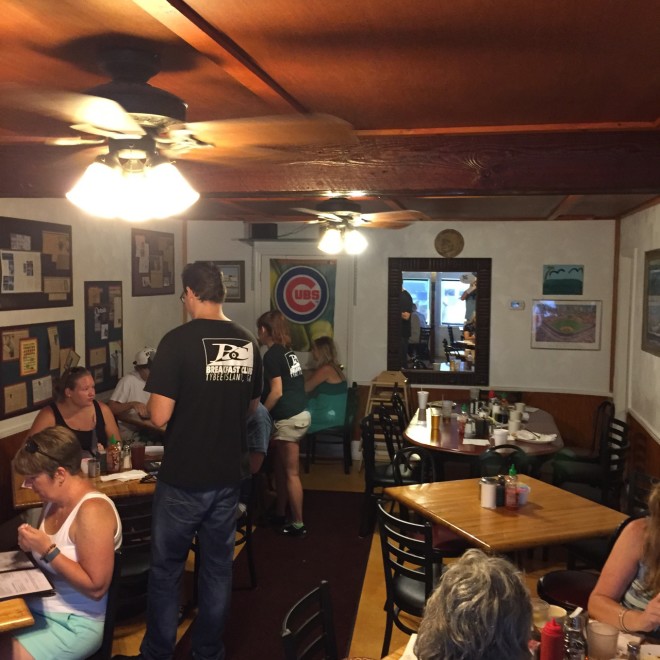 The other room is just as fun, though. It’s a back dining room with tables. 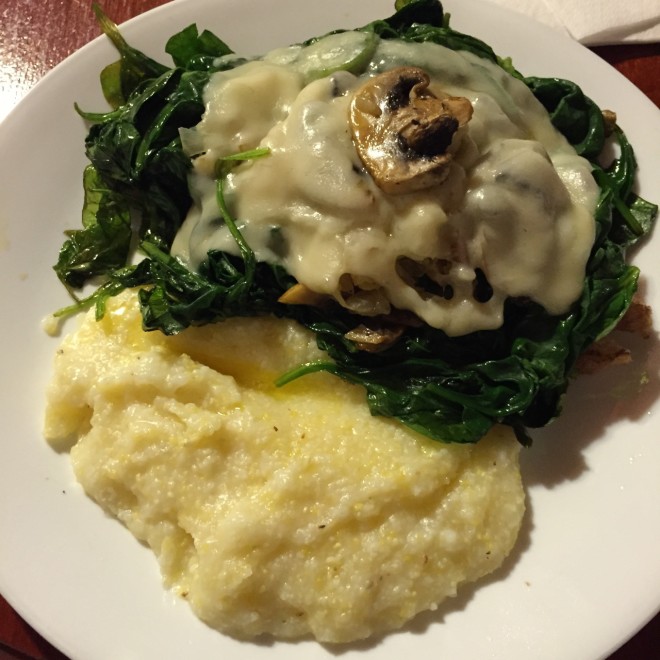 The Breakfast Club serves what I’d call upscale diner fare. It can be simple and filling, but the owner Jodee Sadowsky and his crew know how to ramp things up a notch. This is one of their regular features, the eggs florentine. Sauteed spinach, mushrooms, cheese, and a poached egg buried somewhere in there. Like many dishes, it’s served on a bed of grits. 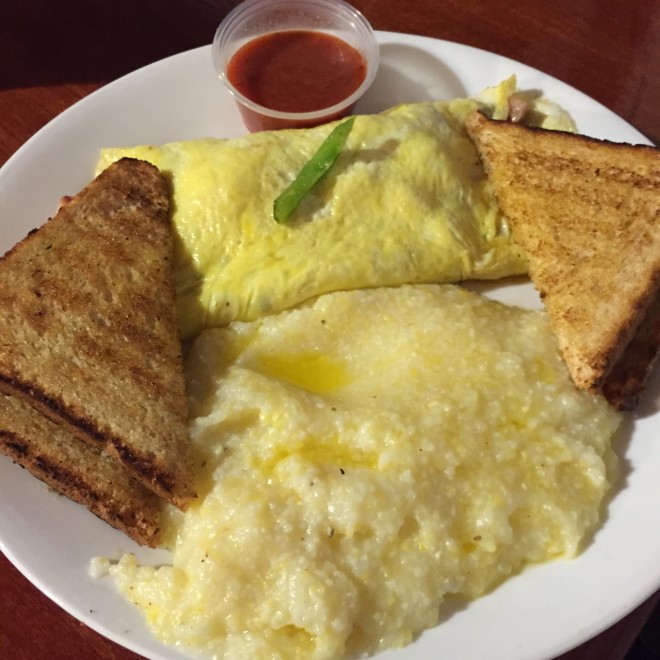 They’ve got a page of omelets on the menu, too. You can also build your own, and by default they come with buttery grits. 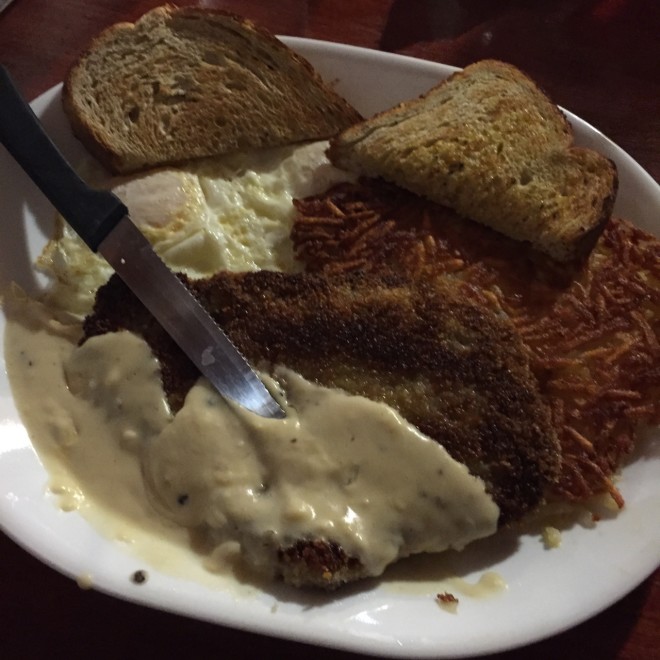 On our first visit we dug into a country fried steak, which was up there with one of the best I’ve had. The bread and gravy were nice and peppery, the steak itself was very tender. You can’t beat it when paired with hash browns. 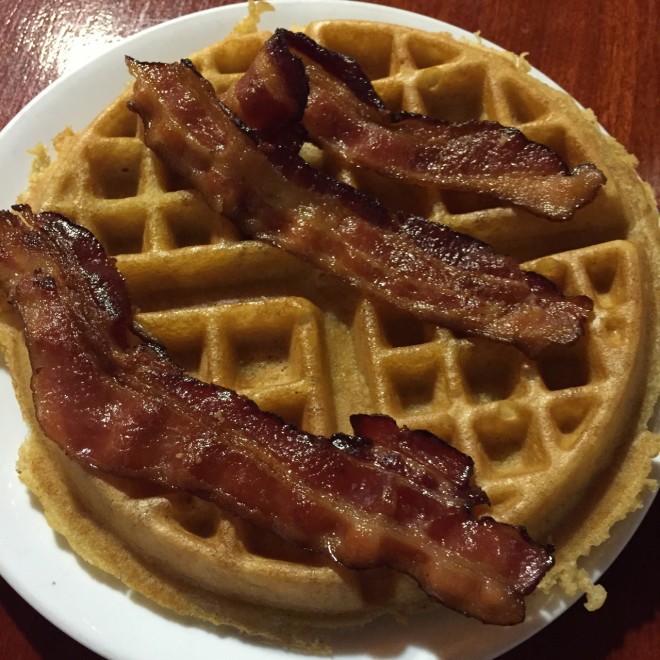 The other thing I remember loving were the waffles. Breakfast Club’s are perhaps the best I’ve had. They’re perfectly crispy, a little sweet, and strong enough to carry toppings. For the real waffle feature, see below. 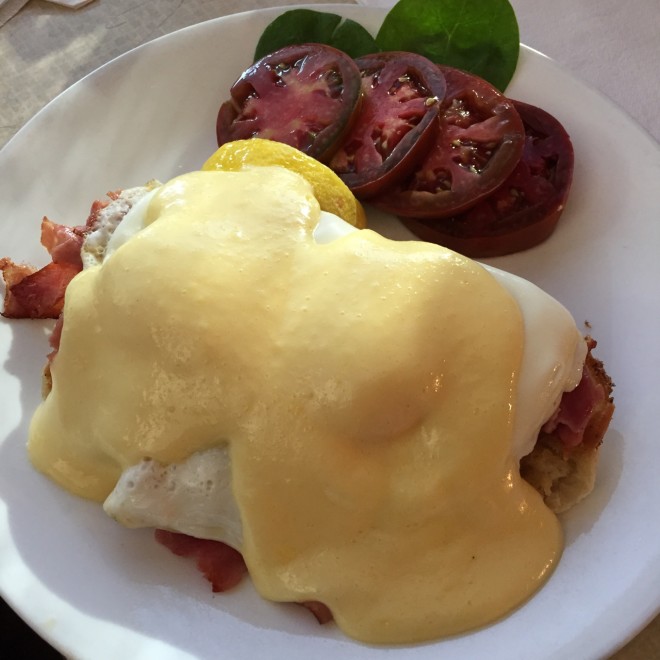 If you go on Sundays, or are lucky enough to catch the feature, you can get their house-made hollandaise, too. On Sundays they serve the Eggs Florentine with hollandaise. One of the mornings we caught a special benedict with a side of heirloom hydroponic tomatoes grown by the owner. 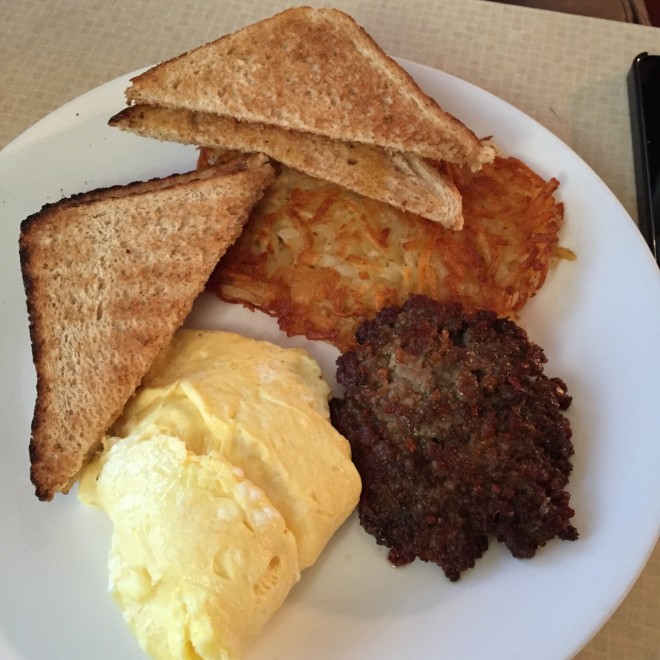 Even the simplest plates are top notch. They make all their sausages in house. 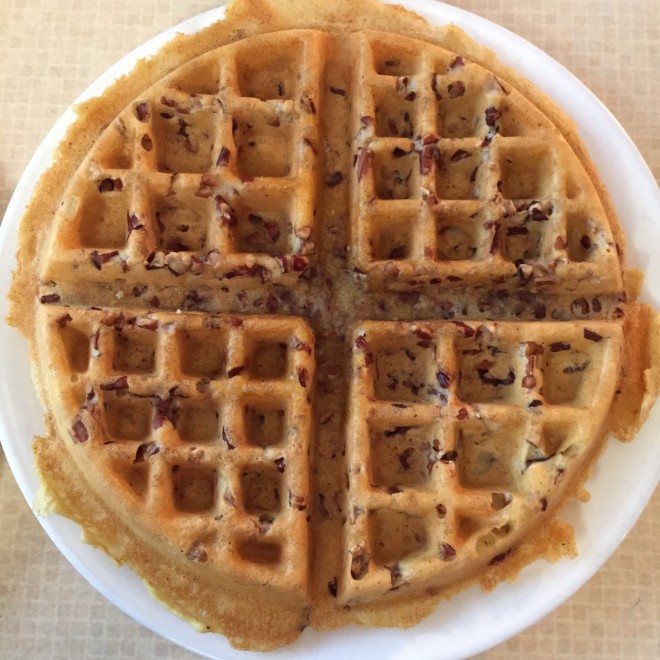 And the real feature of the waffles: the pecan waffle. This isn’t just a waffle sprinkled with pecans; they’re finely crushed and worked into the batter. Simply marvelous. The server may make fun of how you pronounce “pecan” if you’re obviously from up north. 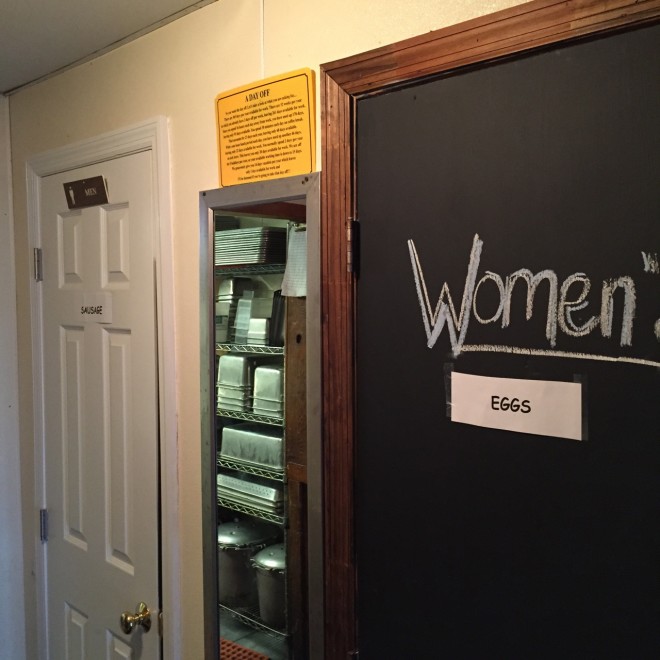 Expect a little sassy humor at the restaurant, too. Like the bathroom labels. There’s also a PMS Omelet on the menu, which is described as “emotionally satisfying.” When you pay at the cashier, you can tip the kitchen staff with “beer money” and they’ll ring a bell and hoot and holler. Jodee will grab a slide whistle and play it. 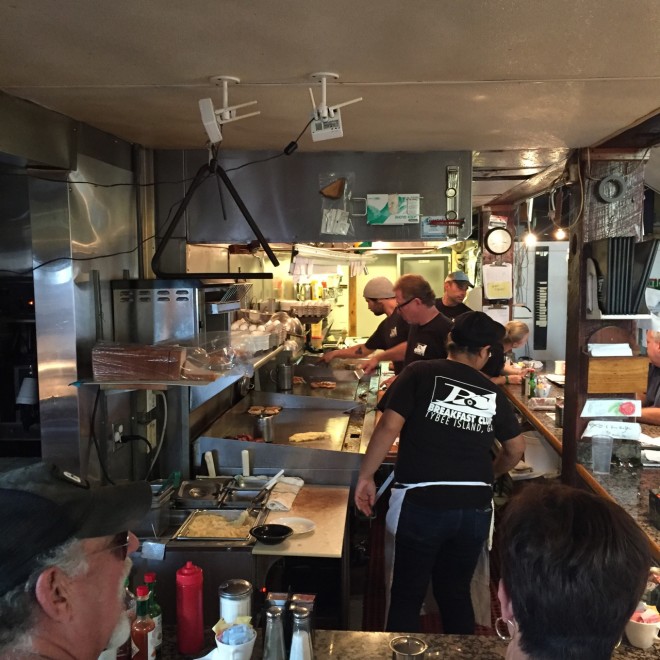 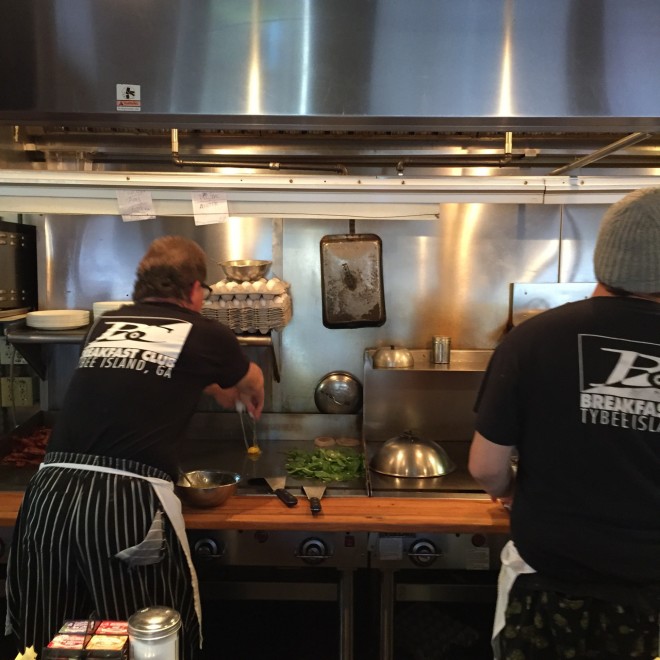 In short, the place is so good because it has personality. 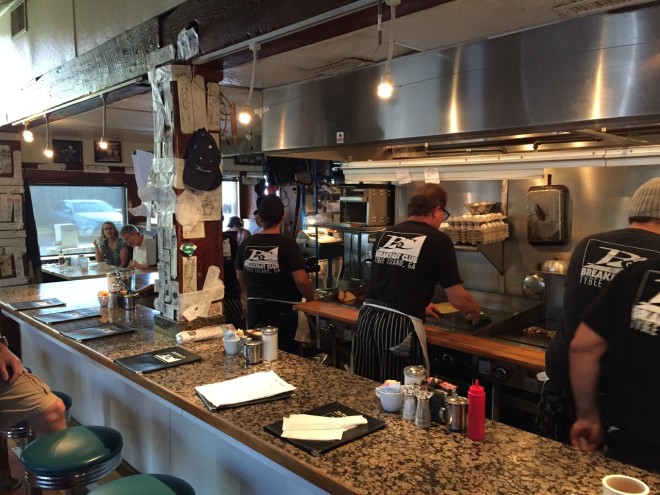 That stems from owner Jodee Sadowsky. He’s made the place a favorite of locals and visitors alike, serving up a fun and filling menu, in an energetic atmosphere that makes you wish you could sit there and watch them all day. 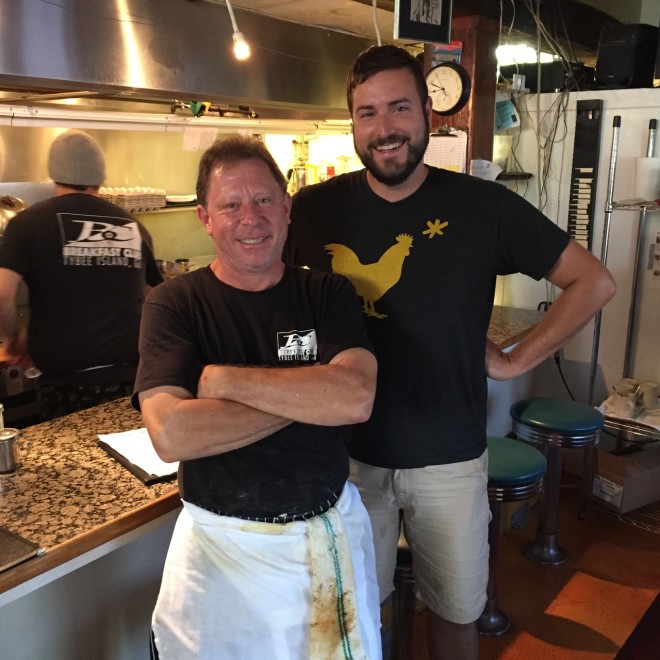 Jodee was working the line during one of our visits, so I took the opportunity to say hello and connect over our shared PBS appearance (his was much more significant, of course). If you’re traveling to Tybee Island or near Savannah, the Breakfast Club is an absolute must. It’s one of the reasons I fell in love with breakfast.