Watershed Dinner at The Kitchen 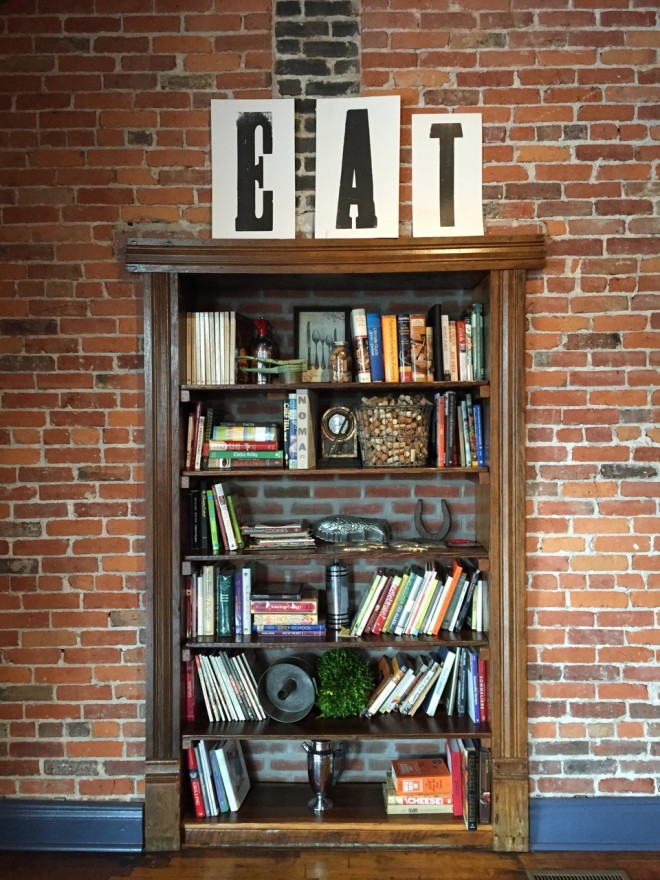 Great stuff is cooking at The Kitchen! A couple weeks ago, Mrs. Breakfast w/Nick and I were invited to their collaboration dinner with Watershed Distillery. Jen and Anne from The Kitchen created a four-course meal, and Grant from Watershed crafted four matching cocktails.

Never been to The Kitchen? It’s a beautiful space at the top of German Village, focusing on participatory dining experiences. It’s rentable for private parties, but they also host open nights like Taco Tuesdays. 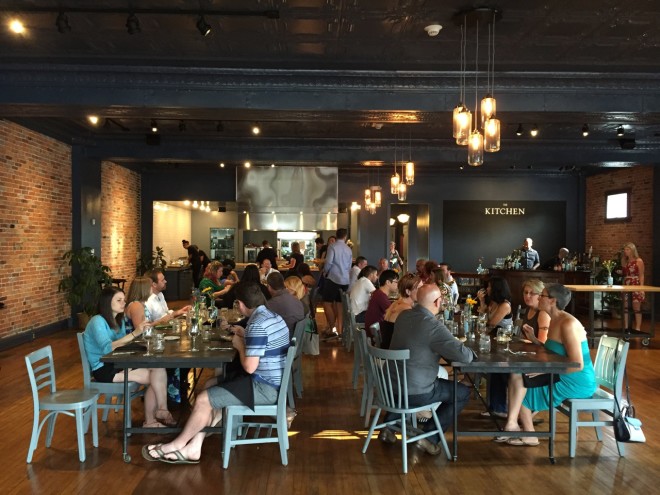 The Watershed dinner wasn’t participatory – we just got to show up and eat! 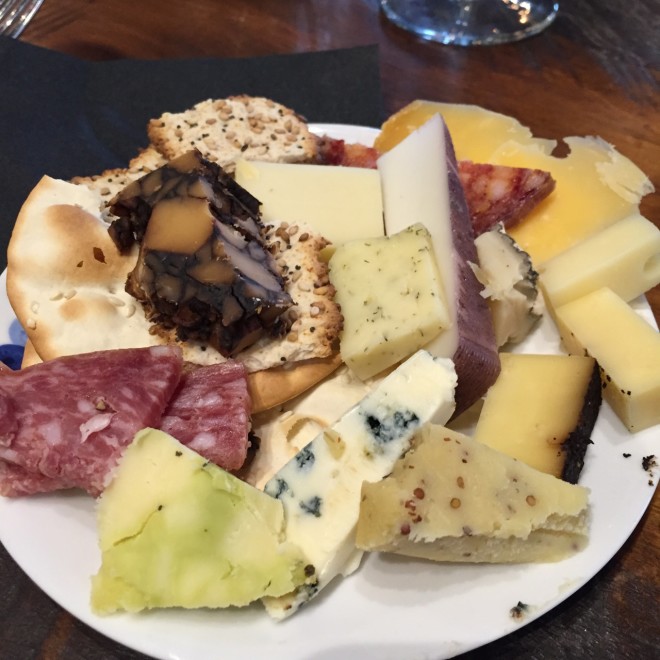 While Anne, Jen, and their team prepared the meal, we enjoyed a sip of champagne and a cheese and charcuterie plate. 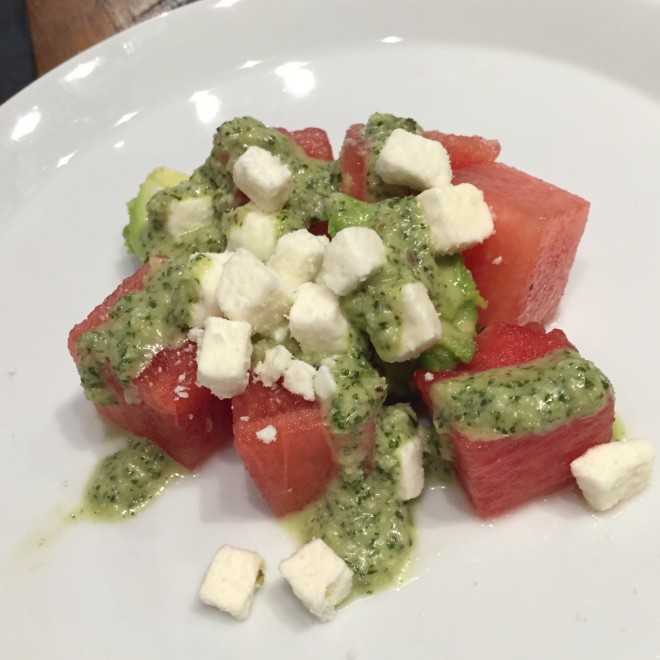 The meal began with a simple but colorful watermelon and avocado salad with feta cheese. Two nice details about the dinner overall: 1.) the meal featured lots of fruits and veggies, so it wasn’t too heavy, and 2.) each course built nicely on the previous one. 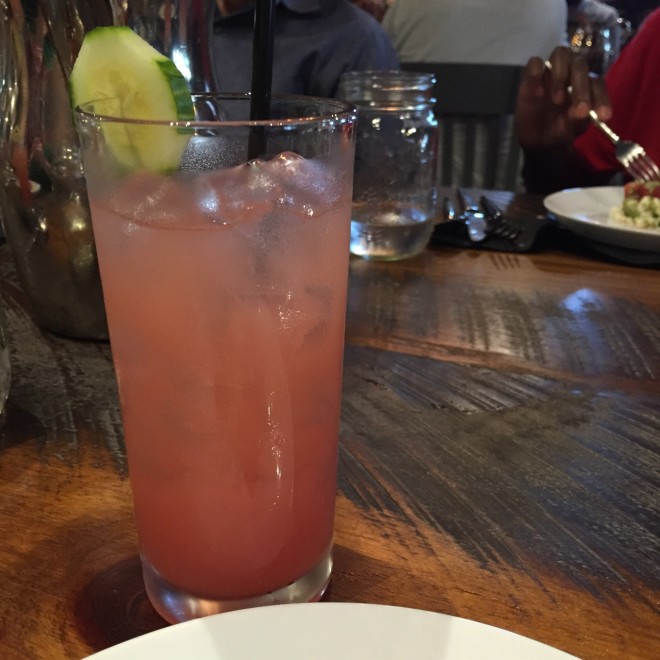 To go with the watermelon salad, we sipped a cocktail made with watermelon, salted honey, lime, cucumber, and Watershed’s Four-Peel Gin. Light and refreshing, just like the salad. 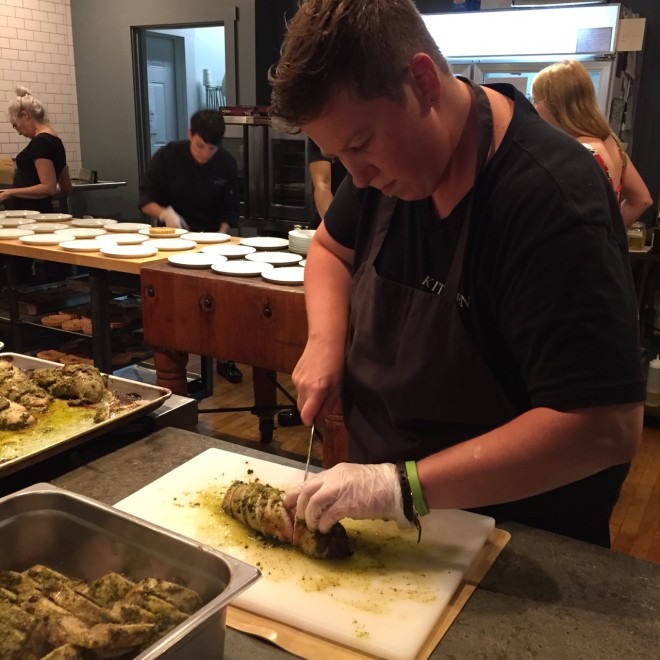 In between courses we had the chance to chat with our tablemates and to watch the culinary team in action. The kitchen at The Kitchen, appropriately, is open to the rest of the space, so we could spy on them as they worked. 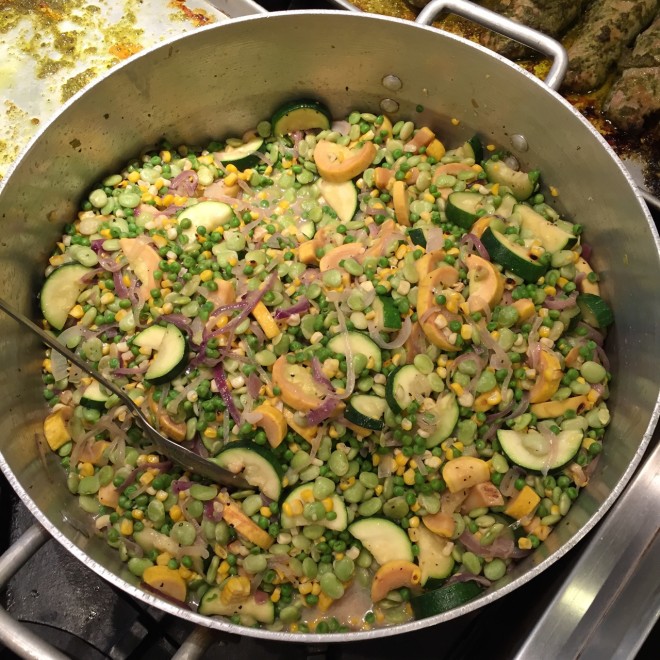 And perhaps sniff at the pot of summer succotash. 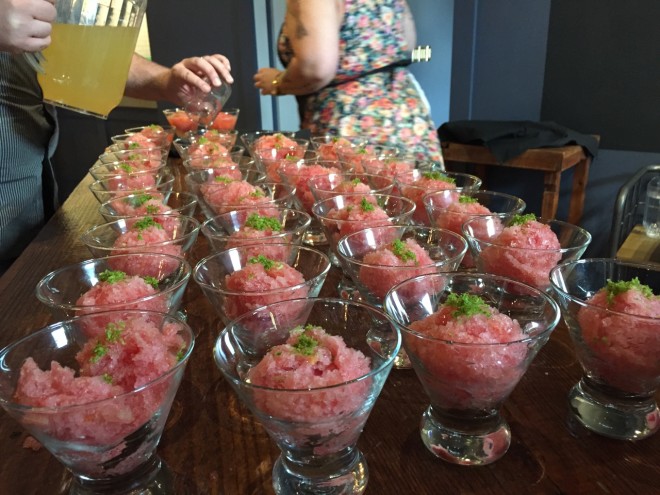 We could also observe the bar assembling cocktails. The second cocktail was a tomato and plum granita with Watershed’s vodka and a green tea syrup. 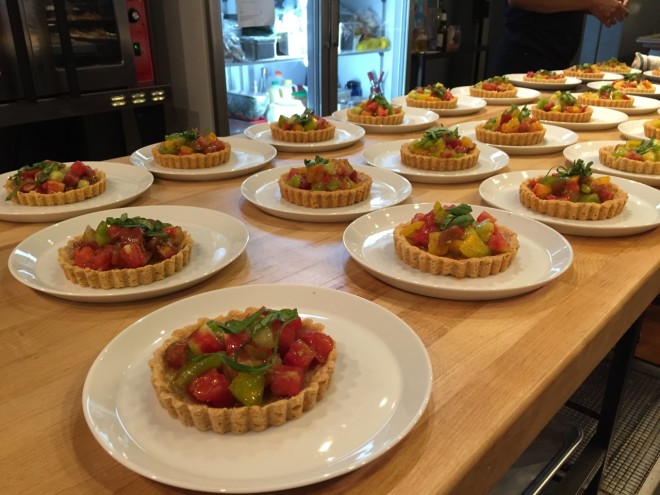 It was paired with an heirloom tomato tart with a savory crust. I love tomato season. At home we’re slicing our abundant garden tomatoes onto sandwiches or chopping them into salsa, so it’s fun to see what they could do with seasonal tomatoes at The Kitchen. 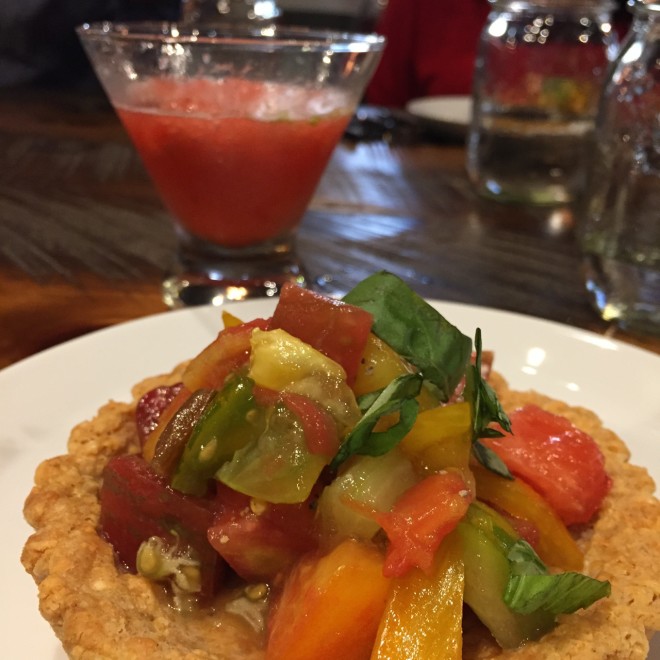 A winner on both counts. 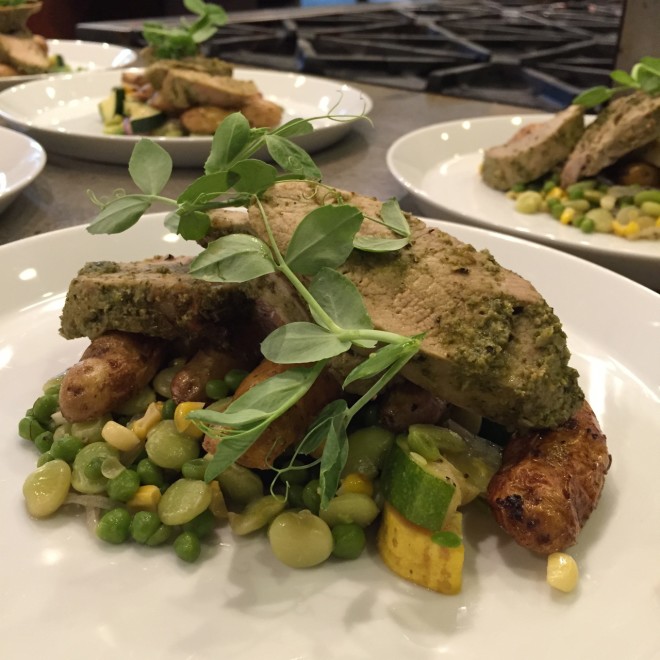 The third course, the biggest of the bunch, took that summer succotash and added a roasted pork tenderloin. 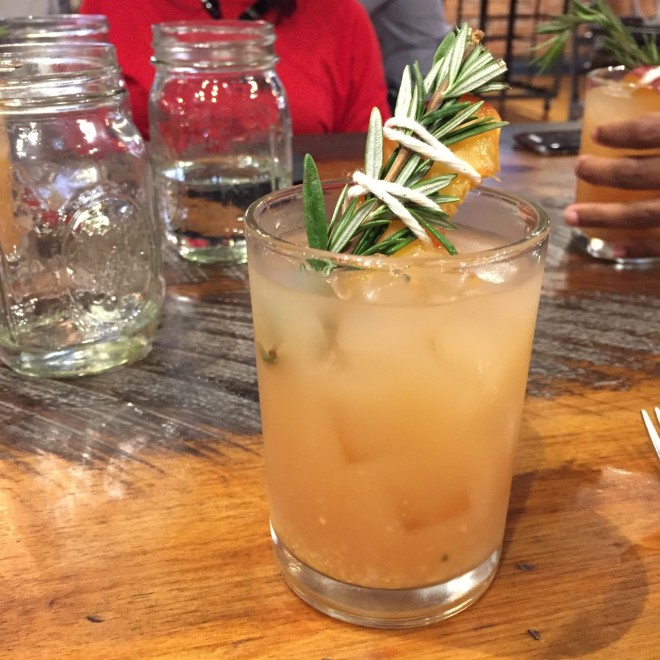 The pork played well with a bourbon-based drink that introduced some savory notes. It was built on sweet corn and peaches (think of cornbread with peach jam, Grant said) and garnished with a sprig of rosemary. 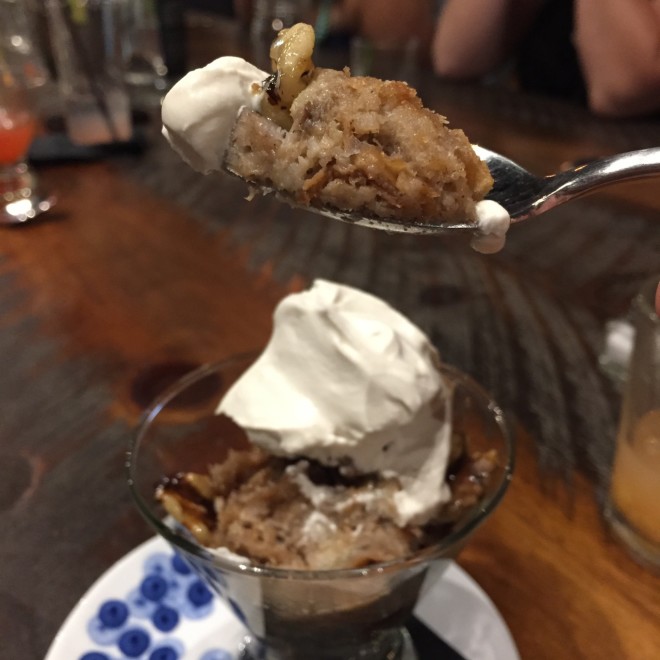 Dessert was a banana bread pudding made with Watershed’s Nocino, a dark liqueur made with macerated walnuts. 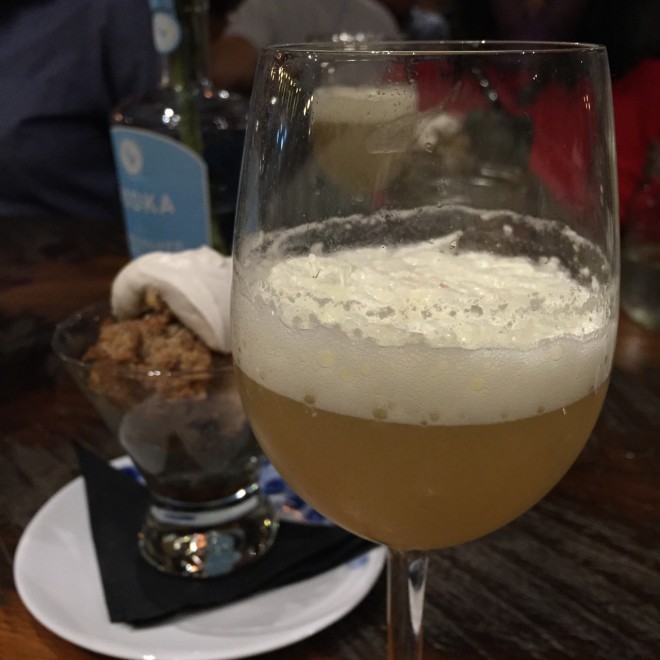 The dessert went with a lemon cocktail made with whipped egg white and Watershed’s bourbon-barrel gin. 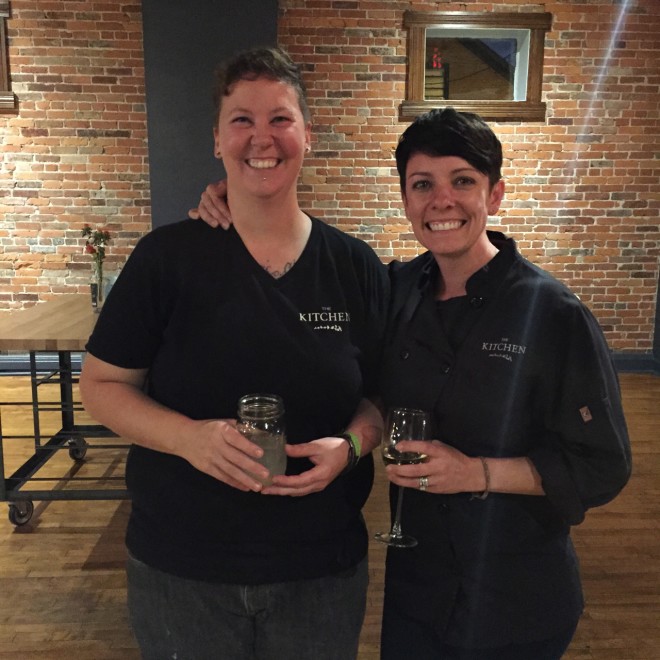 A special thanks to Jen, Anne, and their crew for inviting us and sharing a wonderful dinner with us!

If you’ve never hit up The Kitchen, take a look at their calendar for upcoming events. They do yoga brunches with Native Cold Pressed, taco Tuesdays, and there are more special dinners coming this fall.