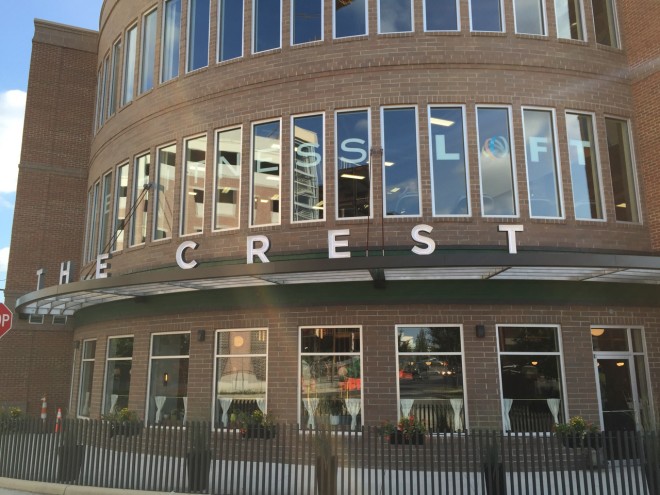 The new Crest location opened a couple weeks ago on Parsons Avenue, and we got to try it! Mrs. Breakfast w/Nick and stopped by there for drinks and appetizers the weekend it first opened, and then the whole family got to stop in for dinner.

The new Crest is twice the size as the original in Clintonville. It’s situated right at the corner of a new build on Parsons, across from Nationwide Children’s Hospital and next door to Alchemy Juice Bar & Cafe (also within the A&R Creative Group, which owns The Crest). 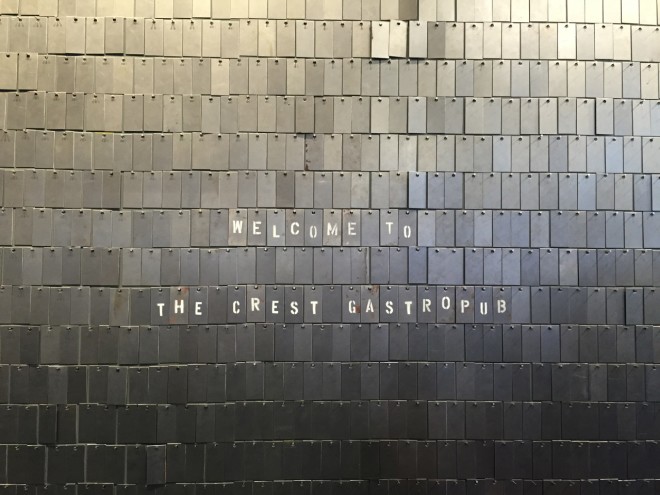 When you enter the restaurant, you’re faced with an interior wall that’s completely covered in hanging metal tiles. They can be arranged to spell out anything, like hours and menu specials. 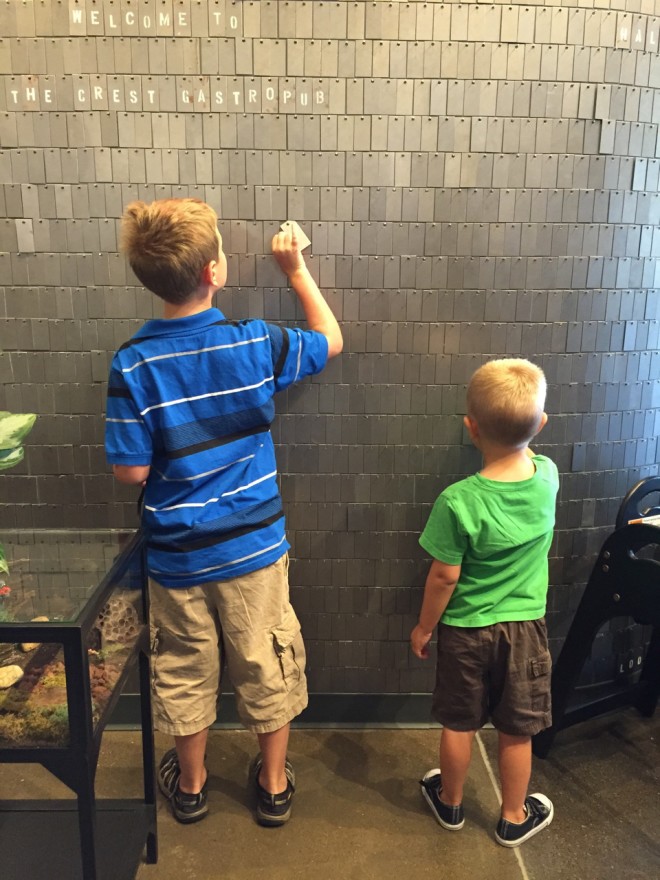 It’s fascinating for all ages. 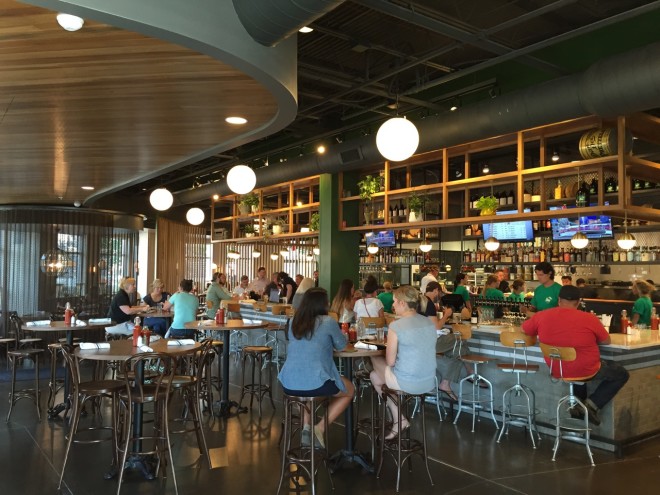 The dining areas feature a big bar, cab tables, booths, and a patio that curves around the exterior corner. 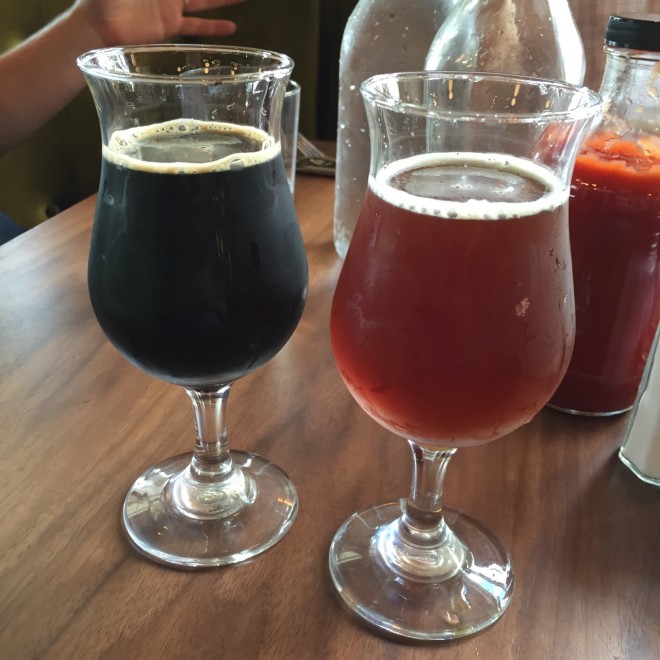 I’ve always liked A&R restaurants for their beer selection, and so far the new Crest has lived up to expectations. When we visited on opening weekend, we discovered Founders’ Kentucky Breakfast Stout (my all-time favorite beer) and Devil Dancer triple IPA on tap. 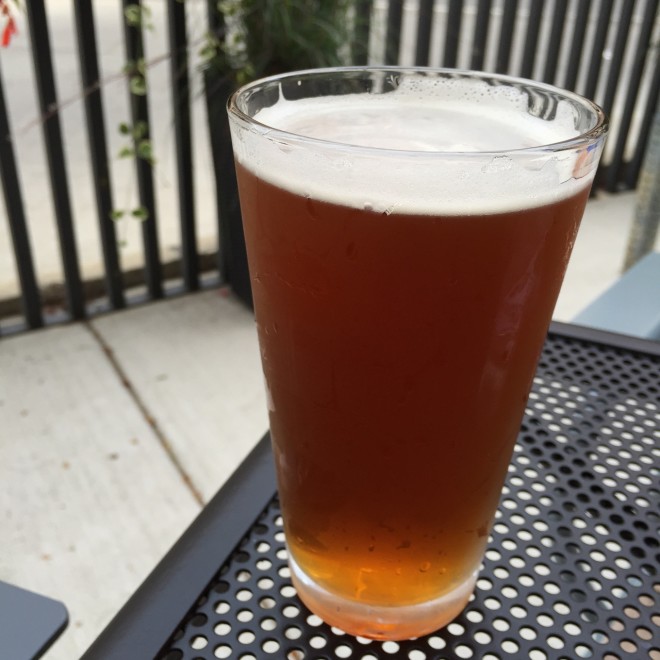 On our most recent visit I went local with Land-Grant Brewing’s new 42-1 Imperial IPA. 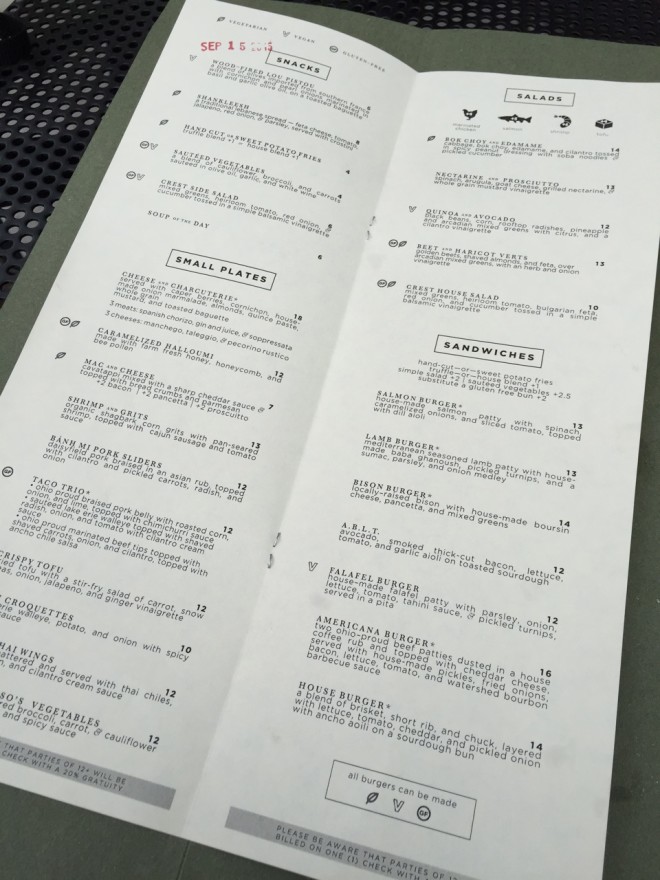 There’s some overlap between the menus at Clintonville and Parsons, although the Parsons location has a little more emphasis on Mediterranean and French specialties. Notice how the menus are stamped with the day’s date, and that many items can be adapted for vegetarian, vegan, and gluten free tastes. 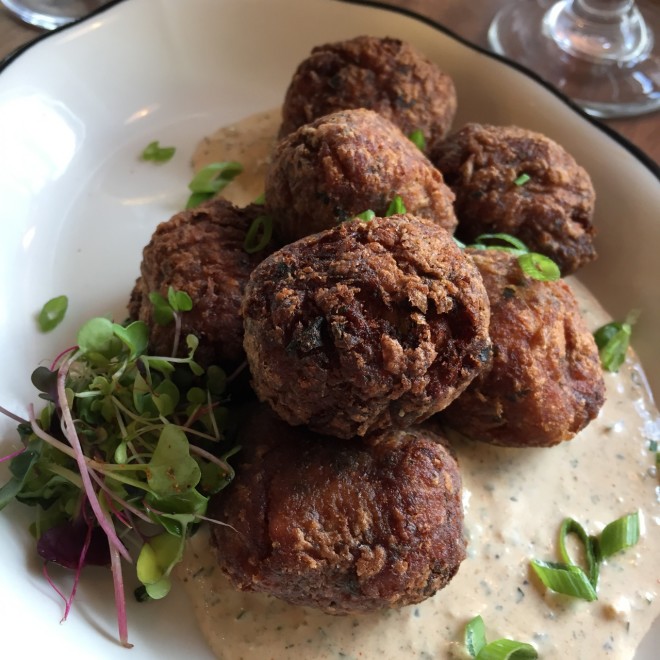 On our first visit we sampled the fish croquettes, made with Lake Erie walleye and a spicy tartar sauce. They were dense and delicious. 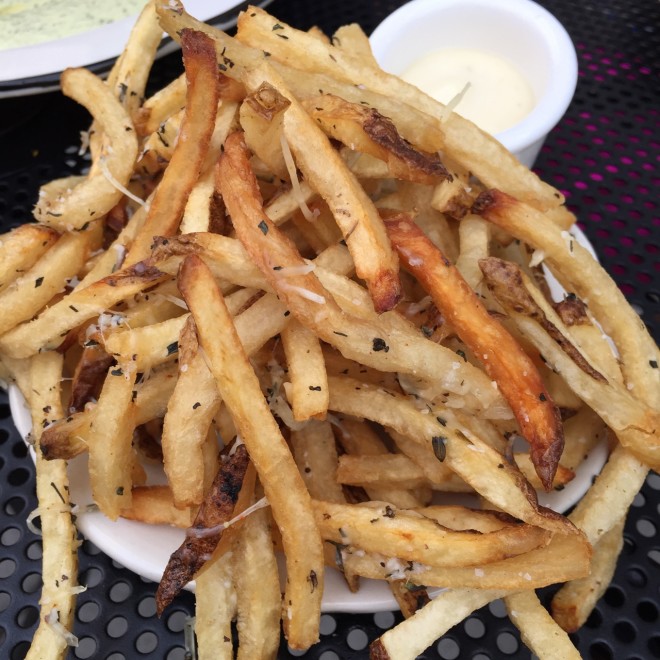 And on our most recent visit we started with a plate of house fries with the truffle blend. 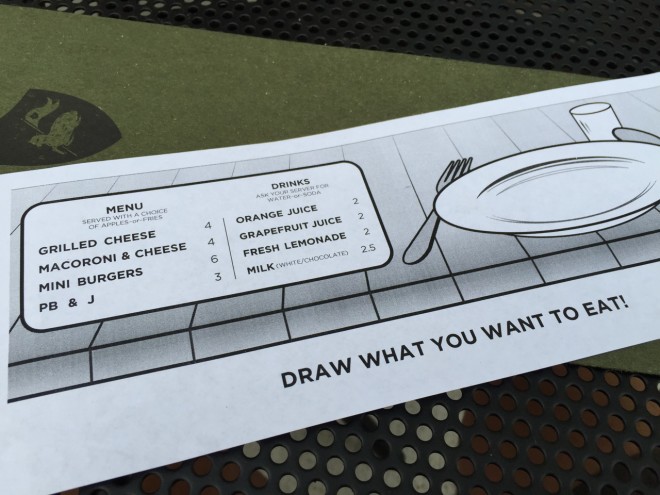 The Crest manages to cater to the kiddos as well, with a simple kid’s menu that encourages them to draw out what they want to order. 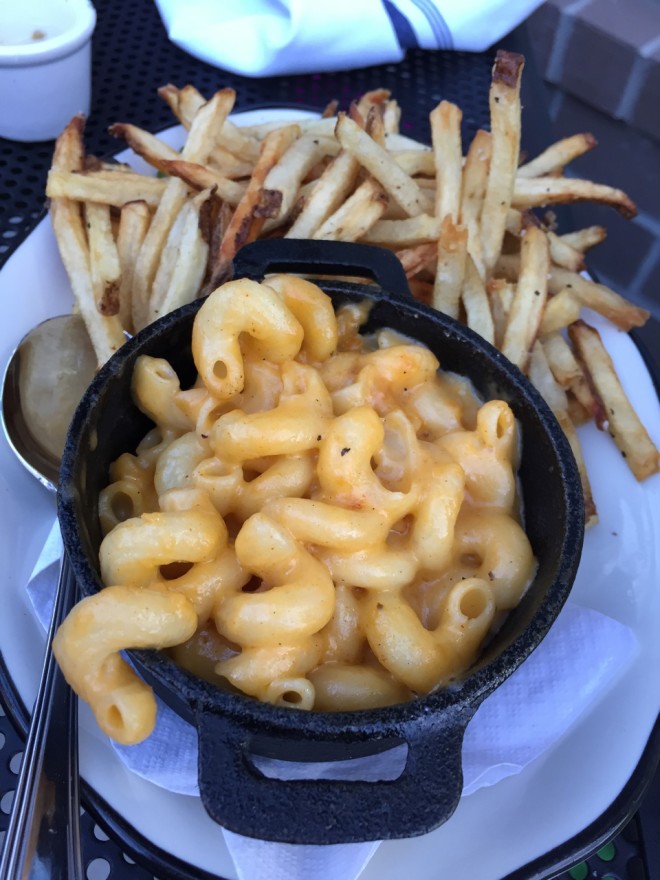 Both of our boys chose the mac and cheese (I mean, who can resist?), which comes in a small cast iron pot. 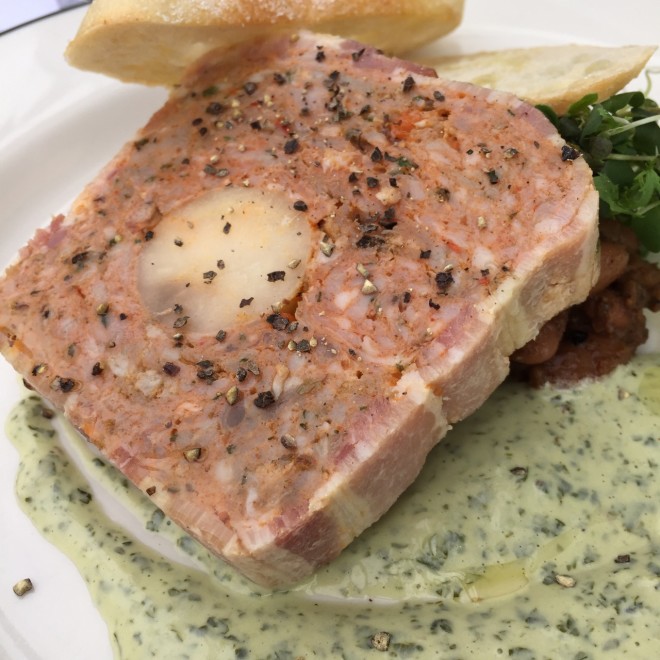 At the encouragement of our server, we started with a terrine made with potato, chorizo, and bacon. I don’t have much experience with terrines, honestly, but this was a good introduction. Think of terrines like a sophisticated meatloaf (good band name). They’re made with a combination of meats, vegetables, and spices, prepared in advance, then sliced and served cold. If you’re a meat-lover: try the terrine. 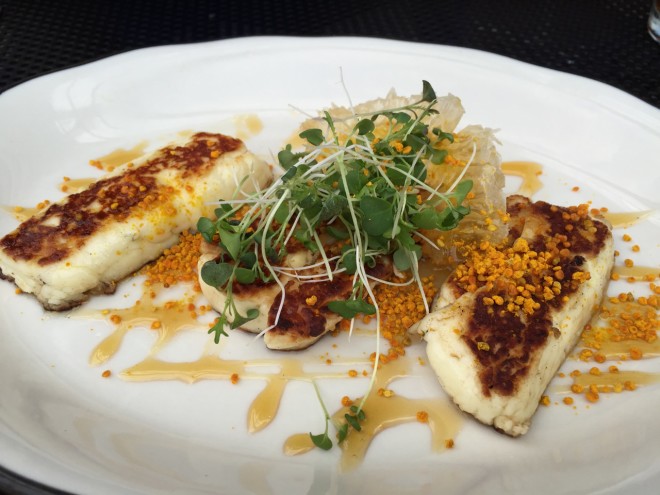 Our server also wouldn’t let us leave with trying the halloumi, and he was right to do so. It’s a hard, white cheese originally made in Cyprus that’s hard enough to be fried without melting. The Crest’s version caps off the very salty cheese with honey, honeycomb, and bee pollen. 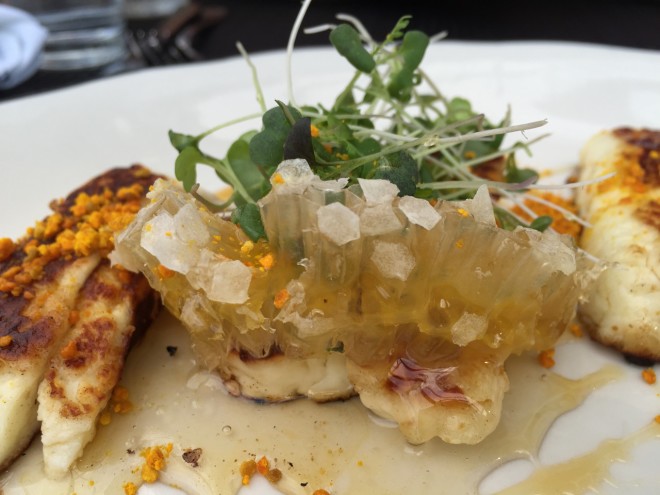 It was one of the stand-outs from the night, a really wonderful blend of salty and sweet. The cheese is hard, but softened just enough that you can cut it with the side of your fork. 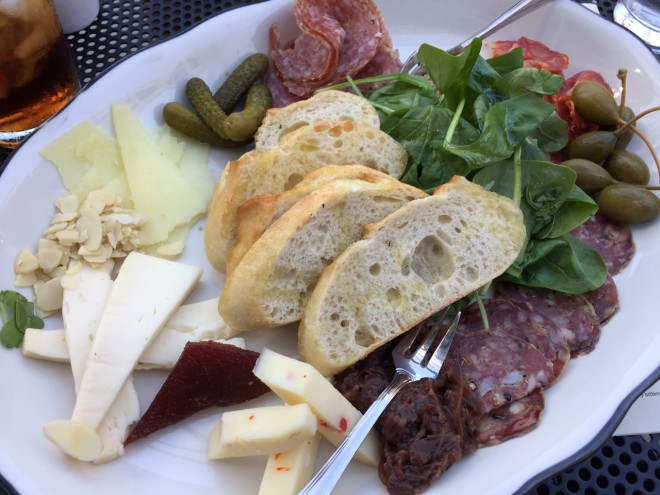 Another menu signature is the cheese and charcuterie plate, loaded with all sorts of goodness, including one meat referred to as “gin and juice” (the deep red one, on the lower right corner) that tasted very much of gin. 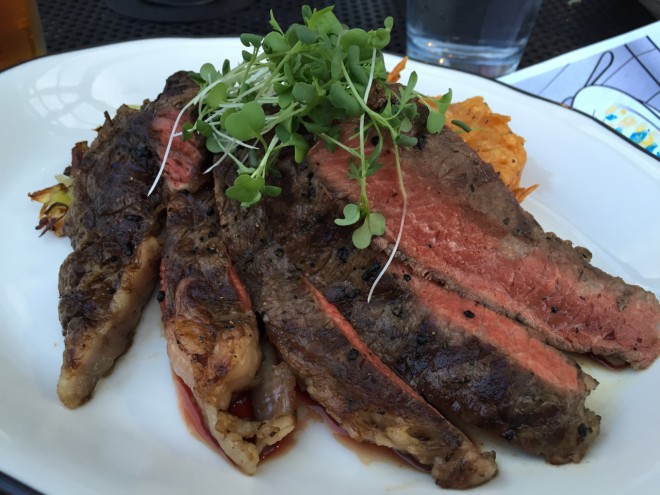 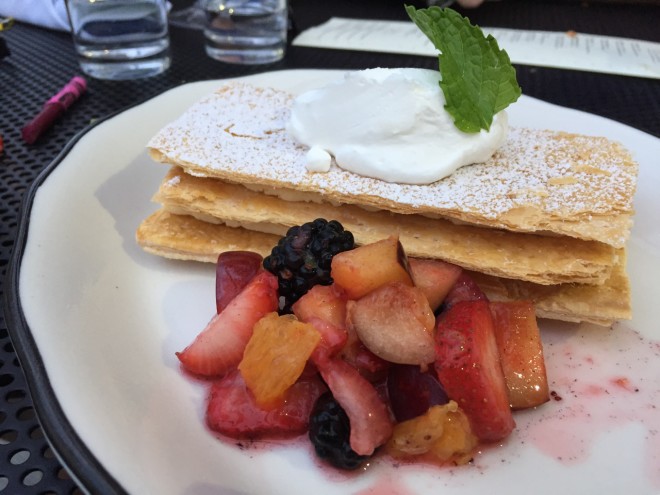 And we finished with mille-feuille, a French dessert made of pastry dough layered with a rosewater pastry cream. 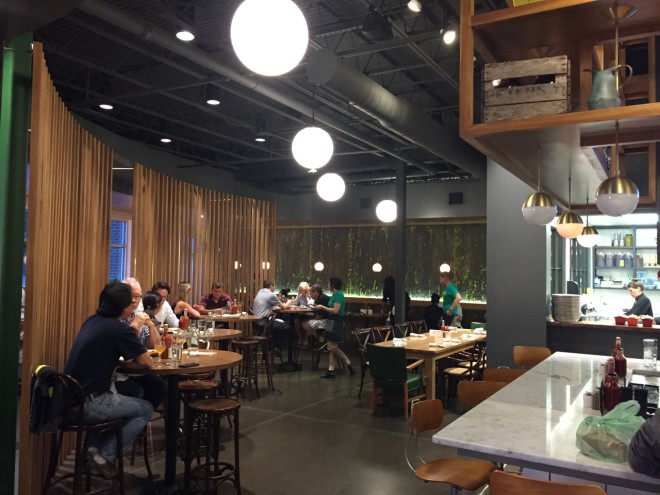 Overall, lots of things to like, especially the beautiful new space. At double the size of the original Crest (and with a parking lot out back!), it’s much easier to find a table. 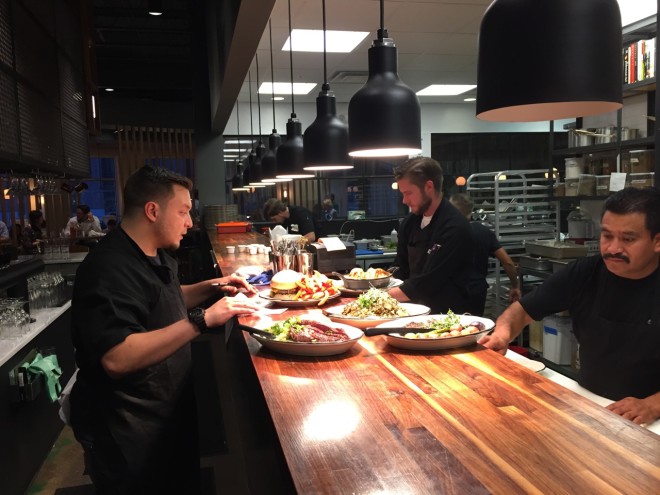 As we finished up dinner, we watched Chef Julian Menaged expediting. The open kitchen is visible behind the bar, and already the crew is keeping busy!

(Disclaimer: we were invited to dinner by the kind folks at The Crest. Opinions are my own.)