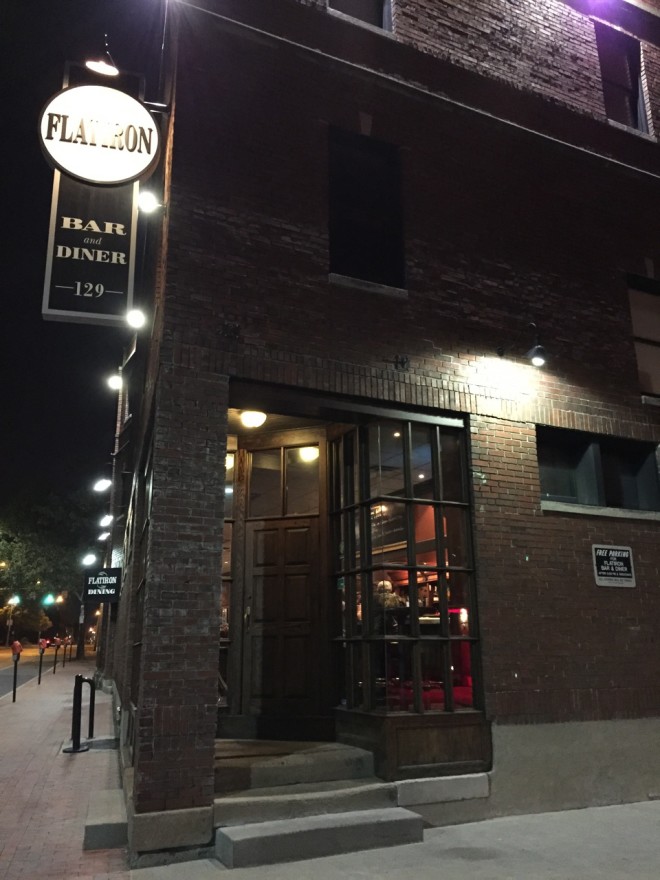 [UPDATE: The Flatiron Bar & Diner has closed and is now the Flatiron Tavern.

In our thirteen years living in Columbus, we’ve never once been to the Flatiron. From what I’ve heard, that’s a common chorus amongst Columbus diners.  The Flatiron is one of those many restaurants that’s just… there. You’re used to driving past it, you noticed its interesting shape, you know people who have been, but you yourself… just never made it. Between you and me, it wasn’t until only recently that I fully understood Flatiron is known for southern specialties. I thought it was a steakhouse.

I’m happy to say that a.) now we’ve finally been to the Flatiron, b.) we’ve been missing out all these years, but even so, there are new reasons to visit the restaurant. Recently, Chef Matthew Heaggans, formerly of the Swoop food truck and various pop-ups, joined the kitchen. If you know Matt’s cooking at all, you know he nails creative comfort foods, and it seems like he (and some other additions in the kitchen) provided a much-needed update to revitalize the Flatiron. 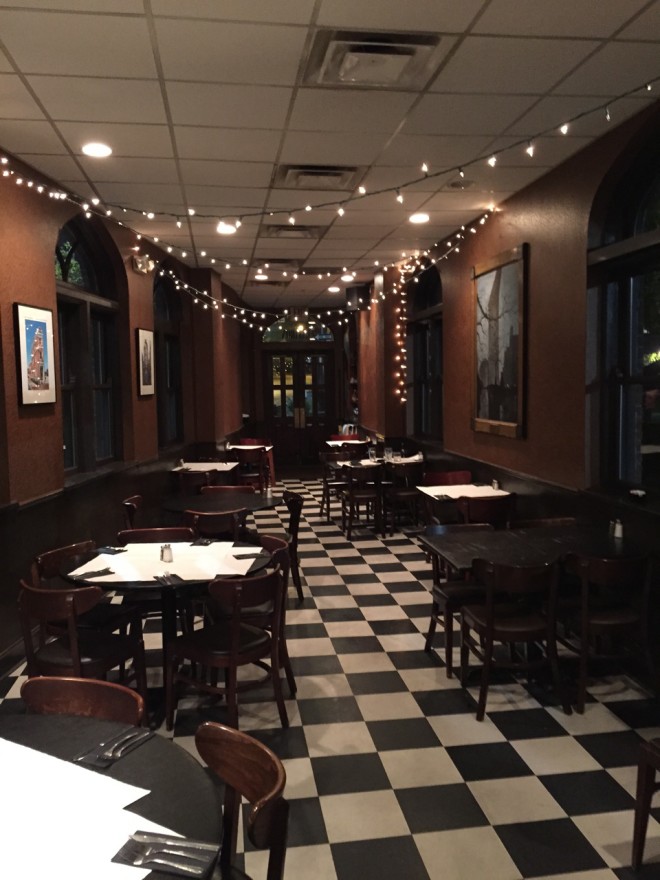 As you can guess from the shape of the building, the Flatiron space starts wide at the main door and the bar, then tapers toward the far end. Out of the back end is a small patio, too. 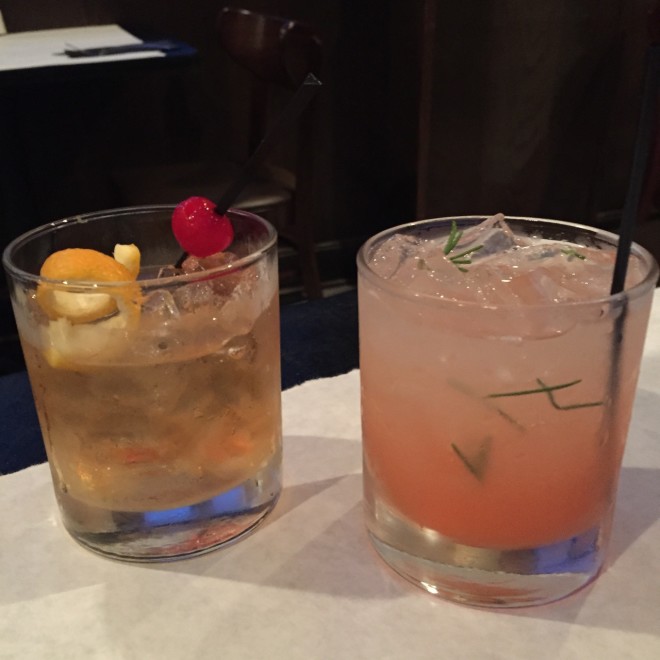 The bar side of Flatiron has a respectable list of beer, wine, and cocktails – not to mention scotch and bourbon.

We celebrated with an Older Fashioned made with Old Overholt rye whiskey, and the Garden Party based on Watershed’s Four-Peel gin. 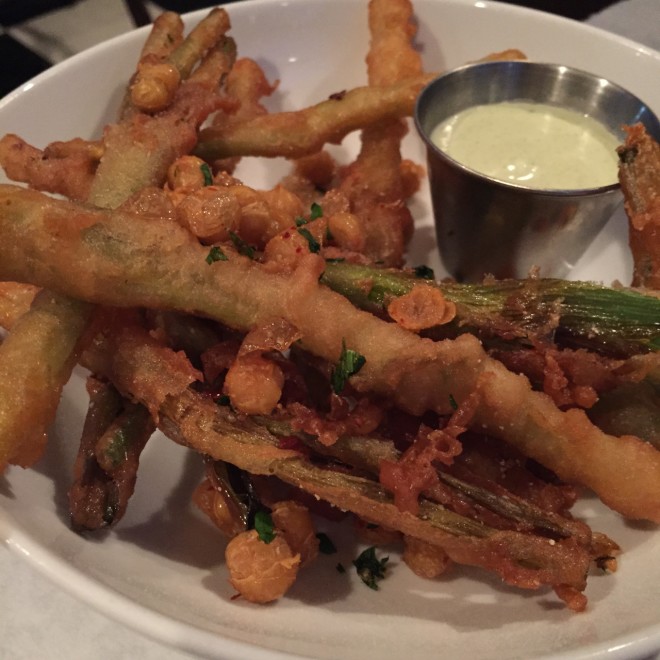 The menu starts on a creative note with appetizers like the House Funyon. Think of these like the best onion rings you’ve ever had: long pieces of green onion fried just right. They’re super crispy, not greasy, seasoned just so, and served with a house ranch. I could have just eaten plate after plate of that. 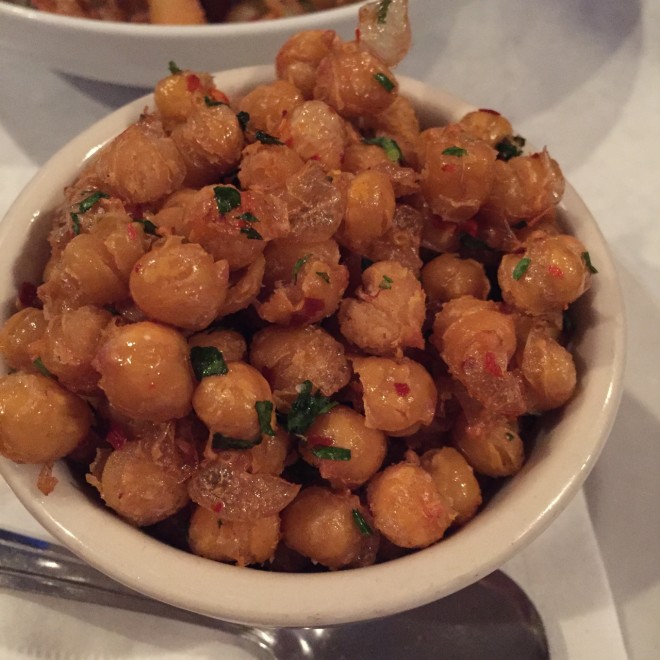 Also on the appetizer list are the chickpeas nicoise. They’re barely fried with olive oil and lemon zest, with a tiny little kick of heat. Mrs. Bfast w/Nick said this is how she’d love to eat chickpeas now and always. 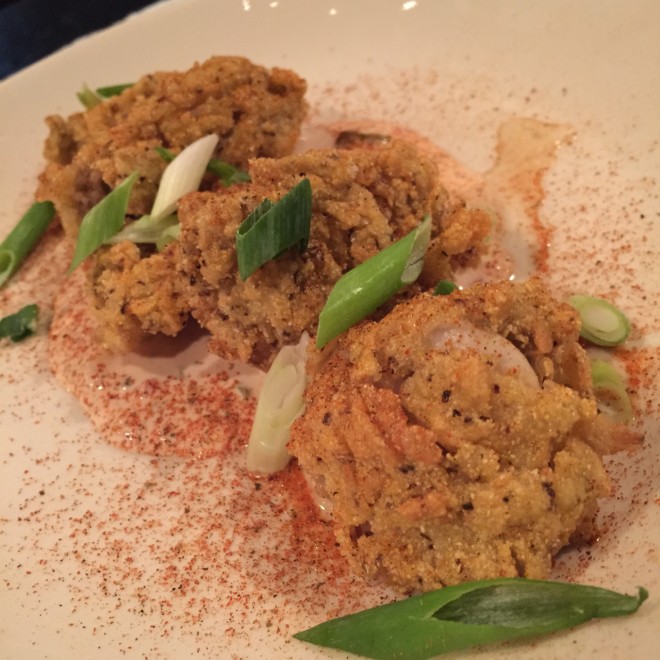 There are still holdovers from the southern menu. We couldn’t resist a plate of the Cajun fried oysters. The oysters are gigantic, breaded and fried, and served over a remoulade. 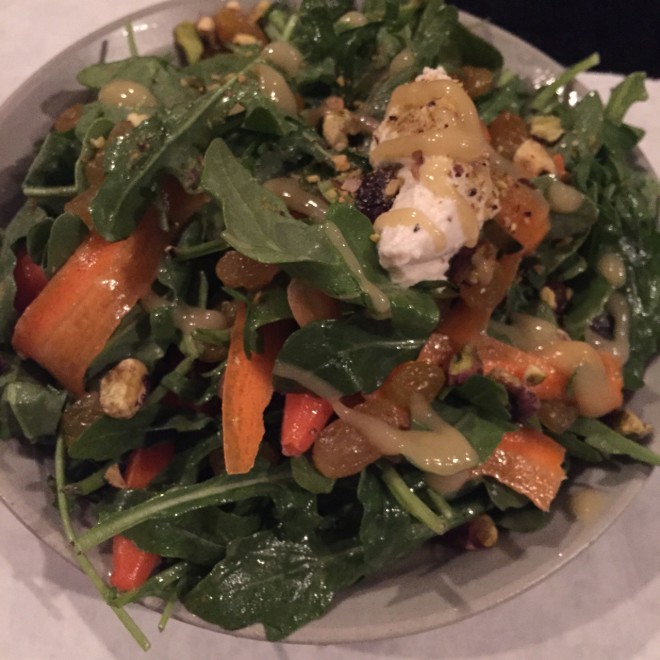 The one thing everyone said we should try is the smoked carrot salad, and indeed that’s what it is: a salad focused around tender smoked carrots. The smoke gets overwhelming in some bites, but it’s balanced out with arugula, ricotta, golden raisins, and vinaigrette. 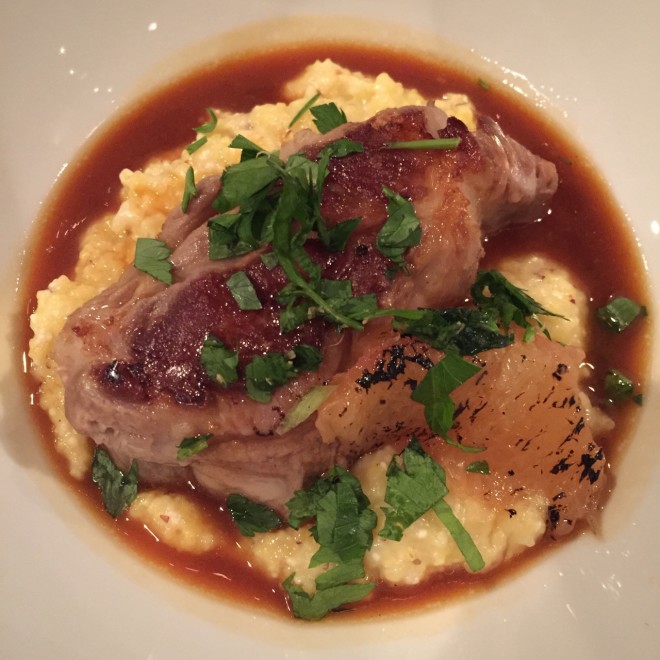 On Matt’s suggestion we ordered the roasted pork coppa. It’s a really fascinating mix of savory, sweet, and sour. The super tender pork shoulder is paired with coconut polenta, roasted grapefruit, and a grapefruit au jus. It sounds surprising, but it really works. 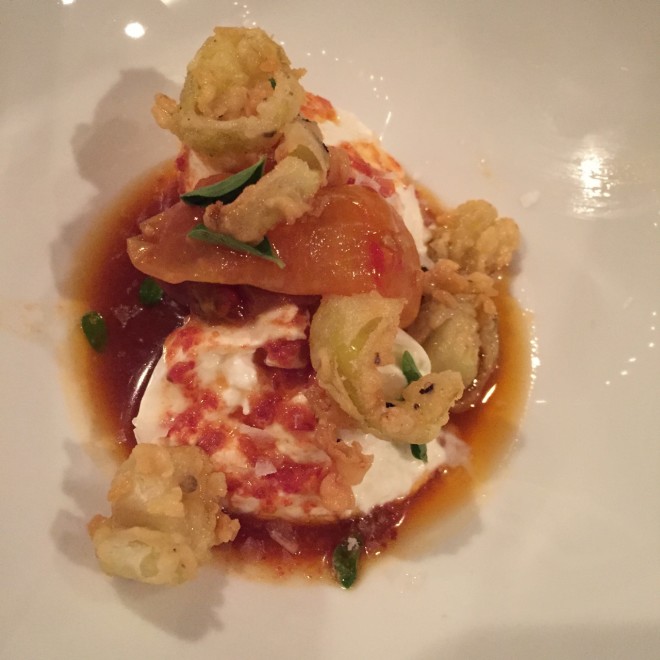 Matt also shared the burrata with us, a zesty combination of confit tomatoes and fried pepperoncini. It’s oily and herbal, with a nice acidic bite from the tomatoes, the peppers, and oregano. 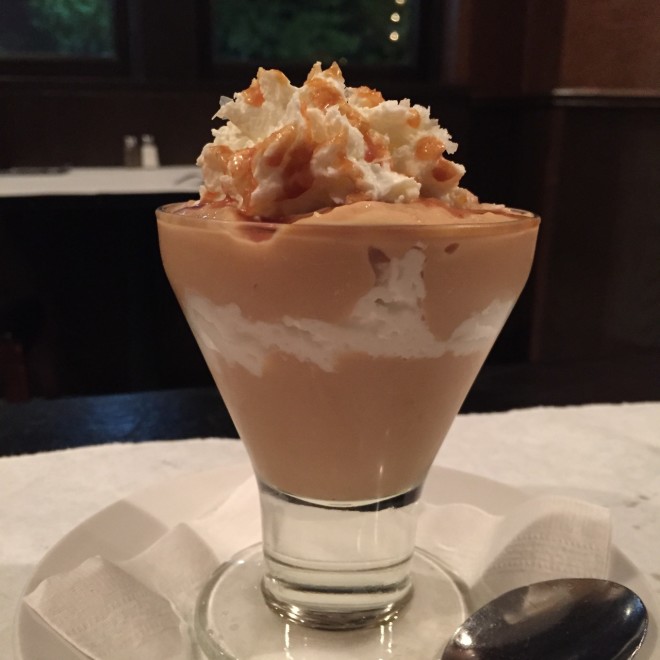 To cap off an already wonderful meal, Matt shared two desserts with us. It was our anniversary, and Matt said, “People should eat food on their anniversary!” Chef’s orders.

First was a salted butterscotch pudding. It’s the perfect demonstration of how salty and sweet enhance each other. It’s a rich, creamy pudding, with those touches of salty bringing out the sweet, caramelized character. If there was a bottomless version of this, we’d never stop eating it. 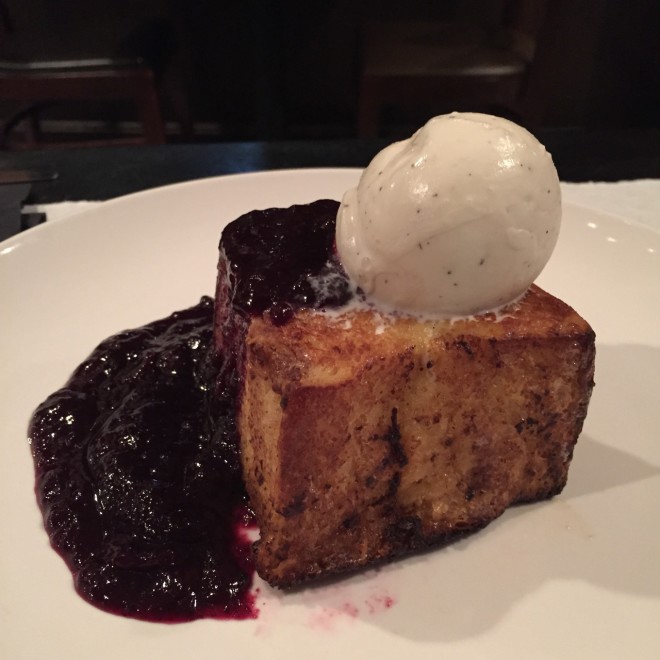 Second up – and just as amazing – was the custard-injected French toast with ice cream and blueberry jam. Up there with some of the best French toast I’ve tasted. It’s sweet but not overwhelming, both fruity and creamy. The toast itself is caramelized around the edges while the inside is cut-with-your-fork soft. 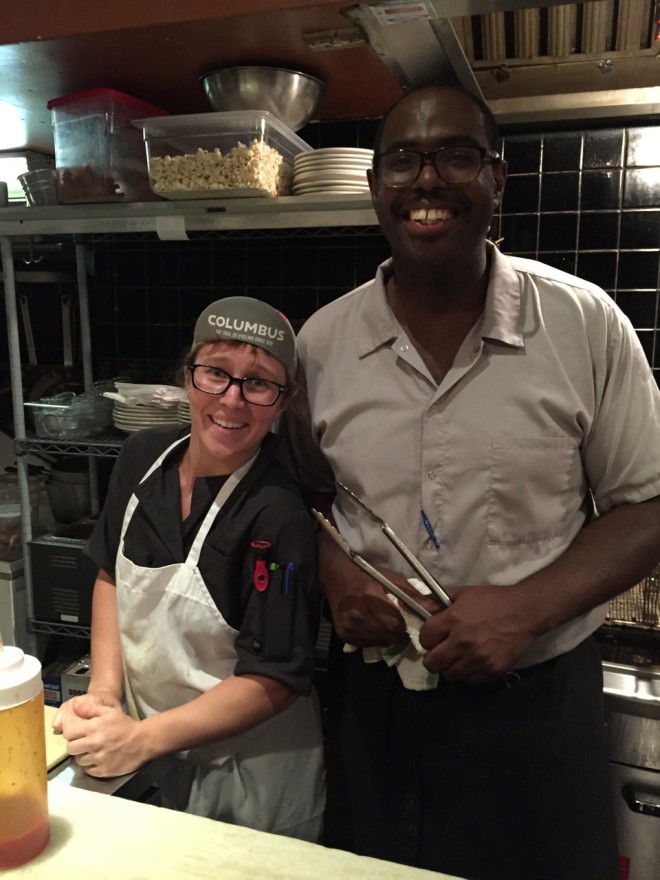 Thanks to Matt and Larissa and the whole team for an amazing dinner! The best part about it is that this isn’t a one-and-done visit. There’s much more to explore: the house-made pastarami board, charcuterie, the Flatiron burger, the fried chicken, the gumbo, on and on.

So, yes, we’ve been missing out by skipping the Flatiron, but hopefully the new team and their menu will encourage more diners to make the visit.