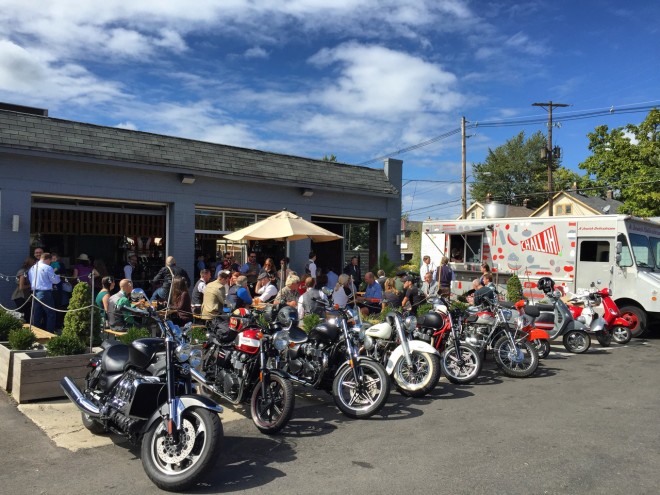 UPDATE: The Challah truck has closed and been converted into a Preston’s Burgers truck. You can still find it for Wednesday dinner and Sunday brunch at Seventh Son!

I love all my blog posts equally, but there are some that I just really look forward to writing and posting. There’s no rhyme or reason to it. I just love posting some of these. The food is great, the pictures turned out well, it’s a fun place to recommend. 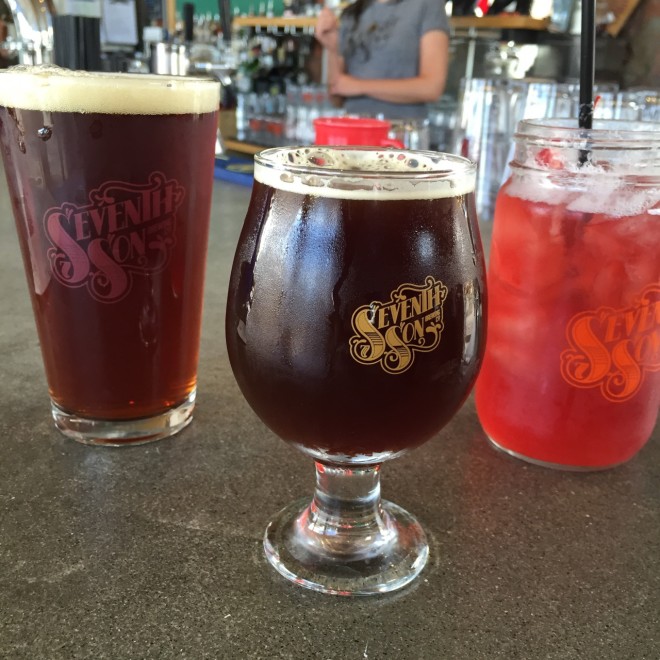 Maybe I’m excited to tell you about Challah and Seventh Son because it involves brunch AND beer. Yeah, that must be it. 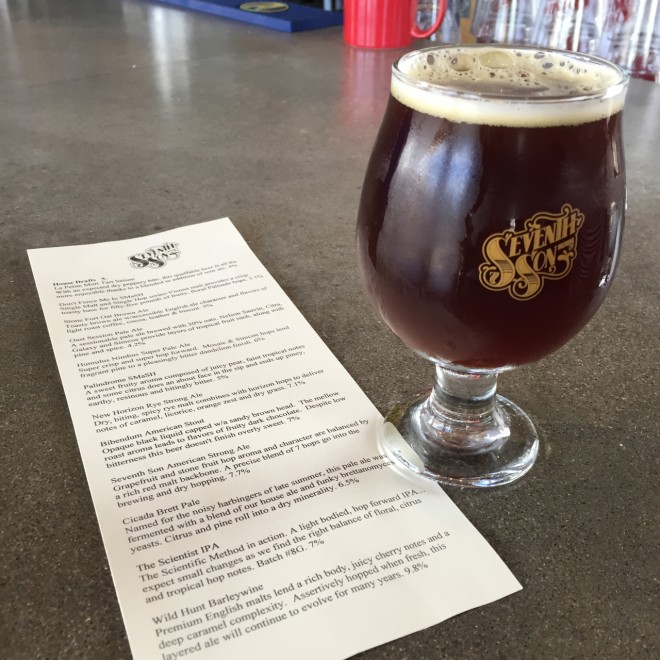 First things first. Let’s talk about the brewery. Seventh Son is one of the old guard of the new guard of breweries. It’s not as old as Barley’s, Smokehouse, Elevator, CBC, but it’s also got a few years under its belt. Along with North High, Zauber, Four String, and others, Seventh Son was one of the first of the new wave of microbreweries. So while it continues to grow and change, it’s got the feeling of an established spot. 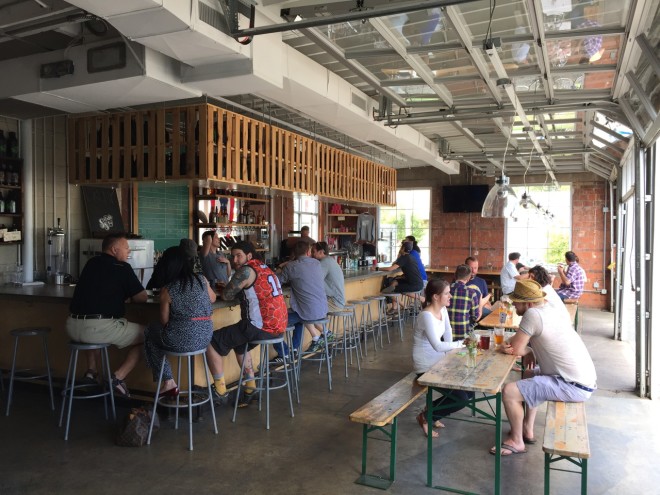 Their Italian Village brewery and taproom is in a renovated garage; the brewery itself was the garage spaces. The space is sizable, with a front patio, a back beer garden, and a private room. There’s good parking and a steady rotation of food trucks. And the brewers have had time to settle into old favorites while experimenting with new beers regularly. 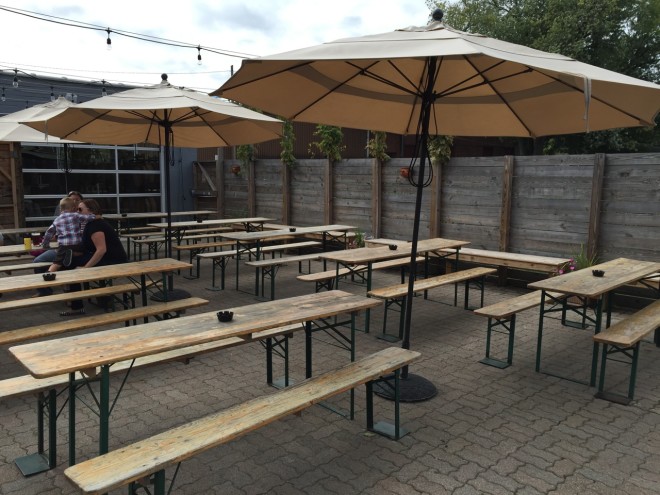 When the weather’s beautiful, this is the place to be. They often build a little fire out front in the cooler months, and the enclosed beer garden out back is a comfy place to sit. 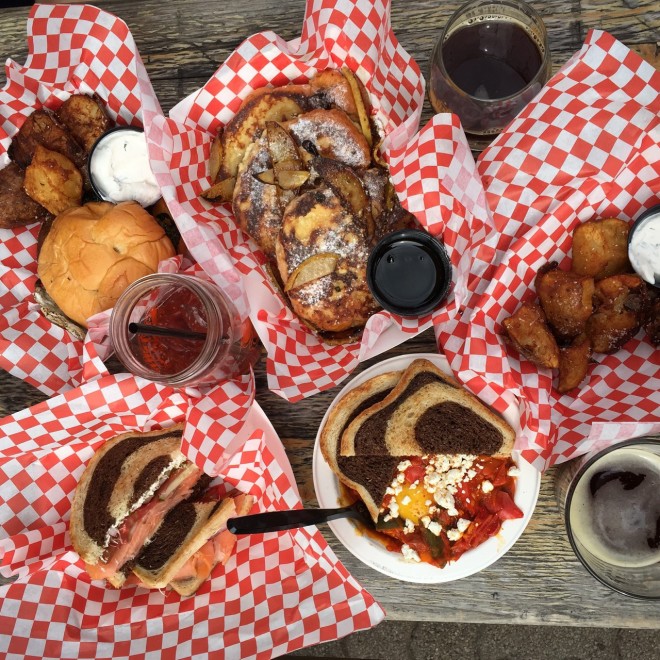 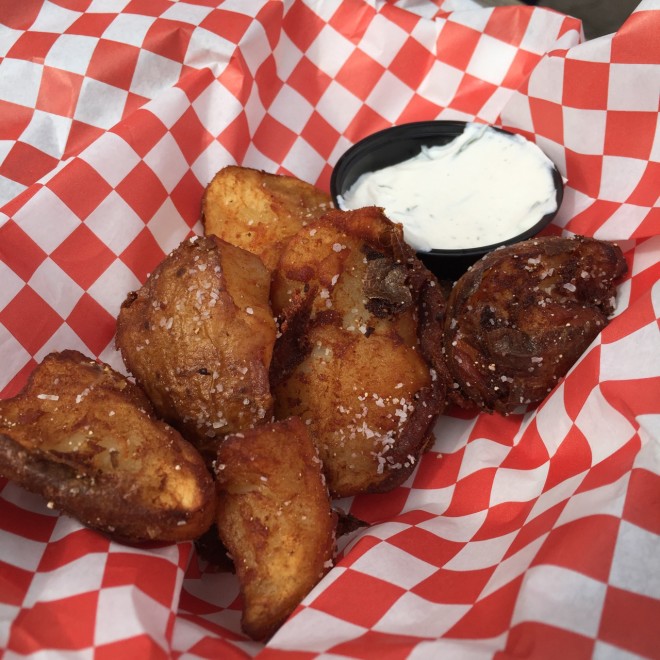 Where do I even begin with Challah’s food? Catie Randazzo, the owner and chef behind Challah, crafts funky Jewish-style deli food. It’s fun, a touch over-the-top, full of flavor, and super rich. She makes her own lamb bacon. She  makes latkes. She plays around with desserts. Earlier this year she did a one-night pop-up at Land-Grant Brewing with Kenny from Kenny’s Meat Wagon. They made these ridiculous breakfast fries topped with gravy and eggs. All these big, salty, simple-but-kinda-complicated foods were perfect for enjoying with a beer or two. 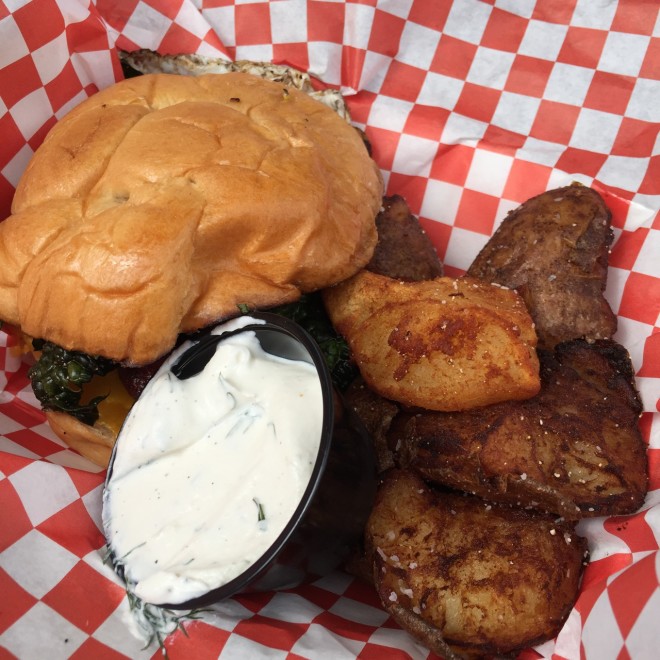 She rotates through specials, so keep an eye on social media and be prepared to be adventurous.

The starting point for our brunch: a breakfast sandwich with a side of chunky and salty fried potatoes. 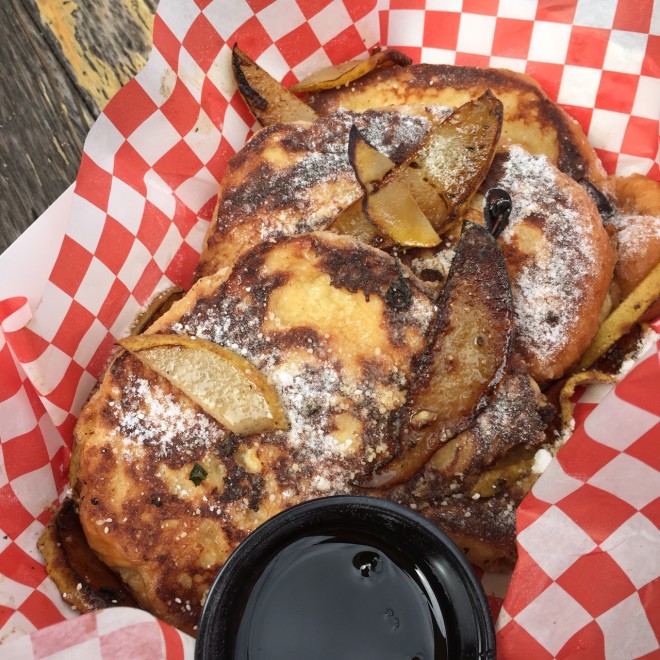 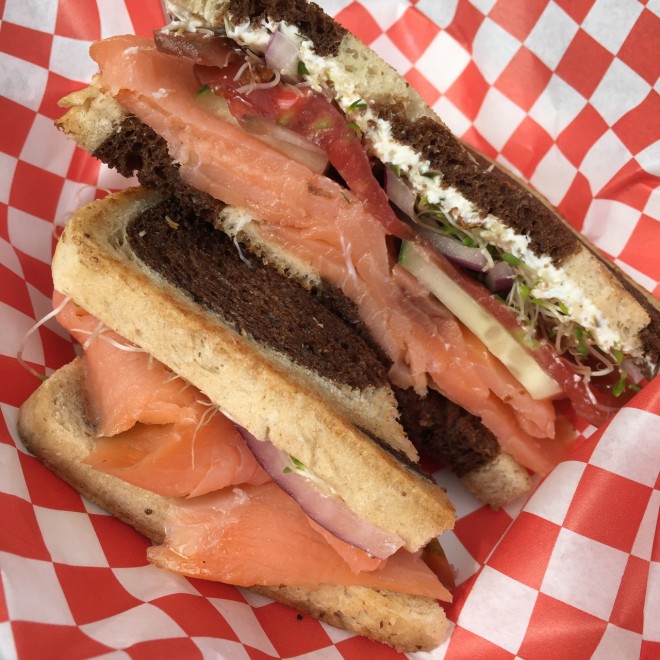 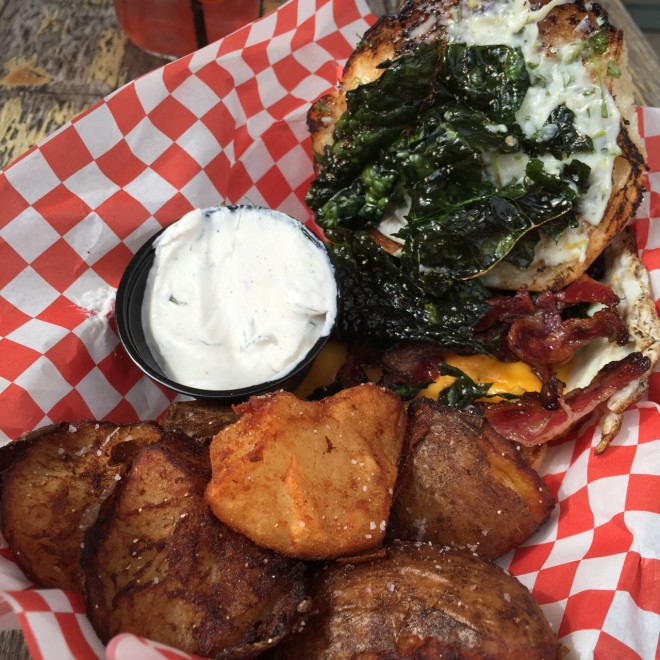 A better look at that breakfast sandwich with bacon and cheese. 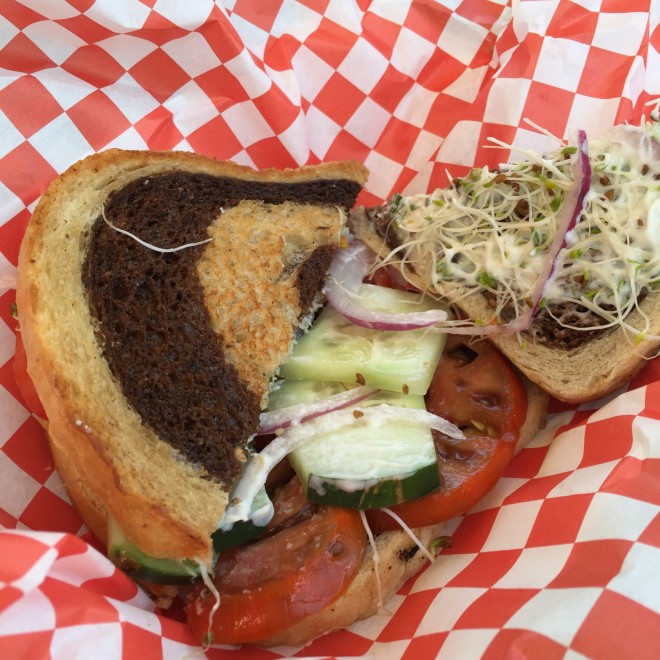 And another of that smoked salmon. 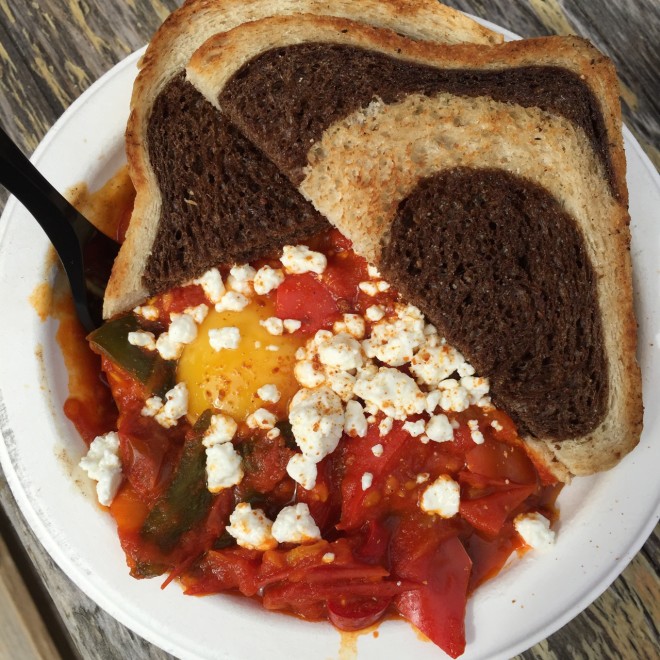 Also, shakshuka! It’s a Mediterranean/North African dish of eggs sauteed in a bed of tomatoes, onions, and peppers. Catie serves hers with rye toast. As you can see, the tomatoes are very prominent in the dish. 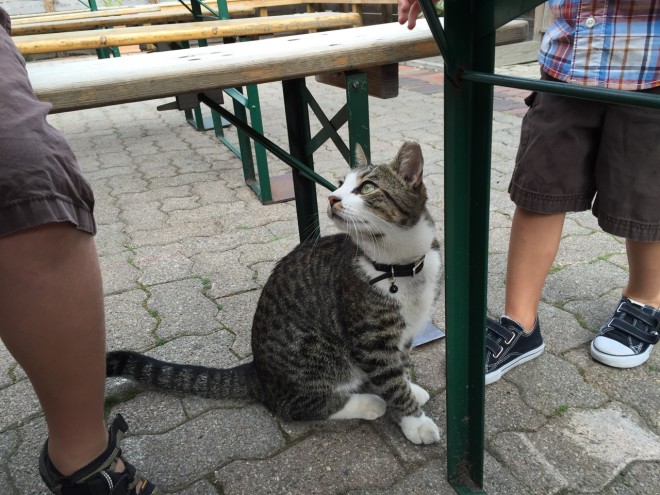 If you’re lucky, you may spot Assistant Manager Old Horatio at the brewery. He’s even got his own Instagram account. 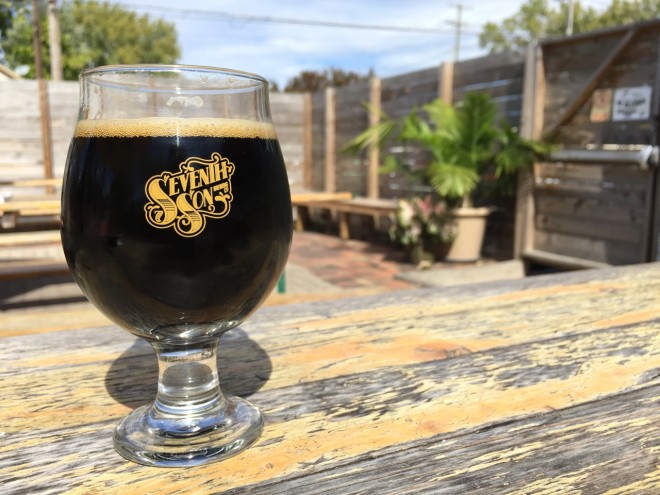 Of course, we sampled our way through Seventh Son beers, too. The Bibendum stout was a perfect dessert. Earlier we had their Wild Hunt barleywine and New Horizon rye strong ale. 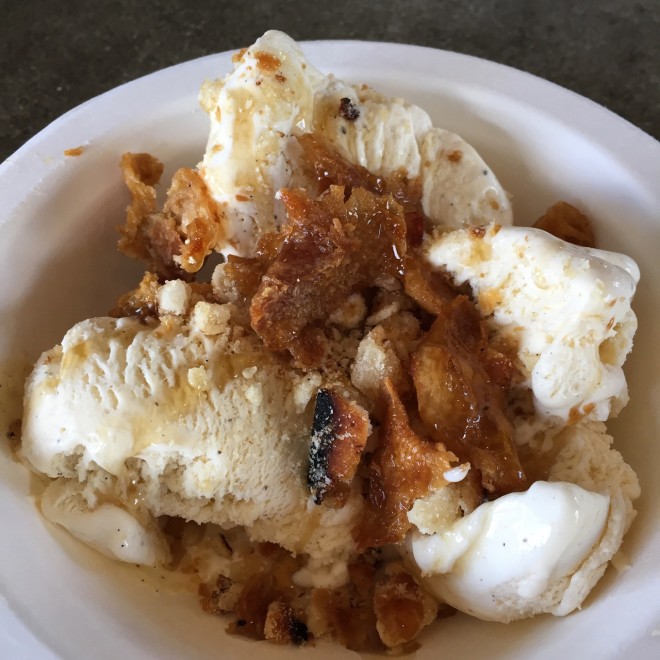 Also, you can supplement your liquid dessert with some honest-to-goodness ice cream. What flavor, you ask? Oh, how about CHICKEN AND WAFFLES ICE CREAM?!

You really have to taste it to believe it, but I think Catie nails it. It’s salty, it’s sweet, it’s pretty awesome. 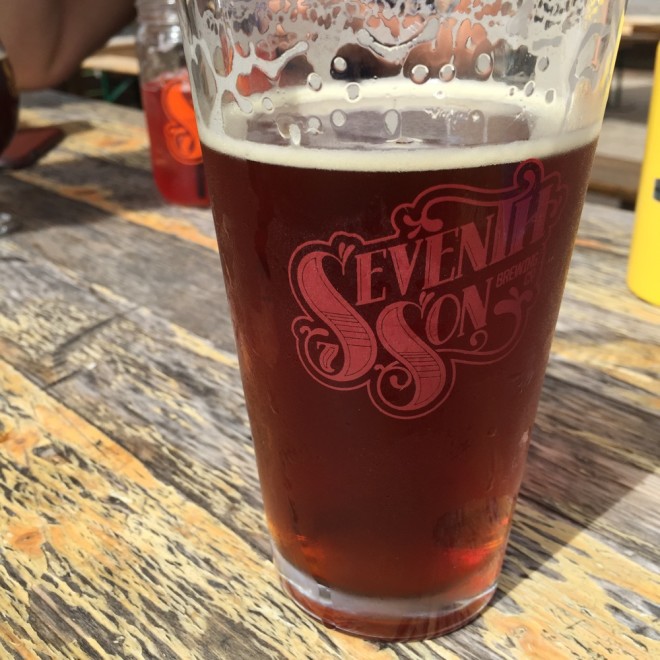 So now you’ve got multiple reasons to catch Challah at Seventh Son. They set up regularly for Sunday brunch, although you can often find them on Wednesday nights, too. (Make sure you check them on social media first, to confirm they’re there.) 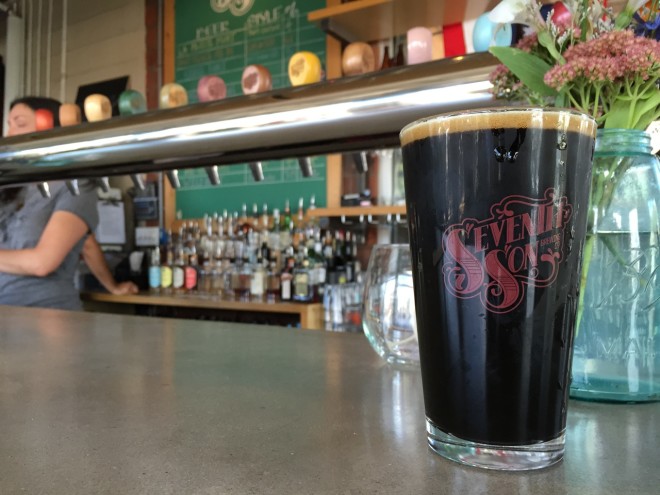 Even if you can’t make it for brunch, make sure you stop by Seventh Son for a pint or two. They feature other food trucks as well, and their beer list is always worth sampling. 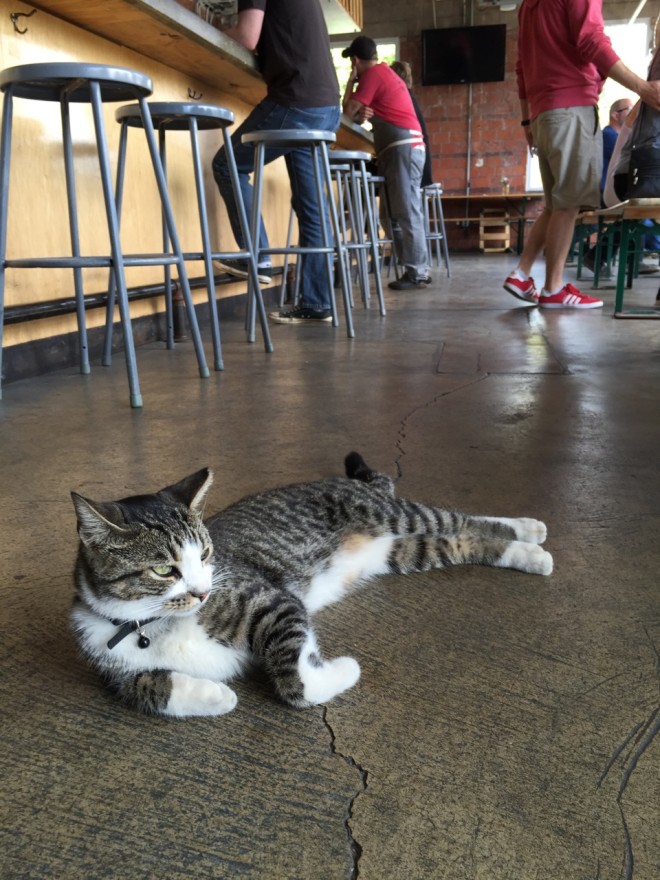 Now get there and get brunching, lazybones!

The 12 Best, Most Glorious Breakfast Sandwiches in Columbus