A Staycation at the Hilton Downtown Columbus 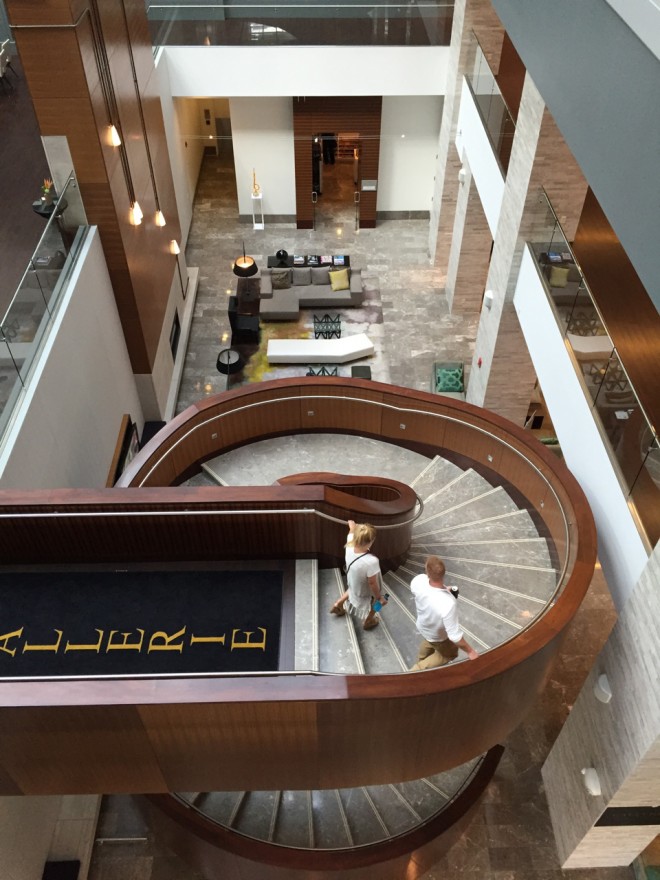 The Hilton Downtown Columbus has been a lovely addition to Short North, downtown, and the Convention Center area, creating a building that’s connected to the Convention Center by the elevated walkway over High Street, as well as hosting the Gallerie Bar & Bistro and a range of local, national, and international artists. While we’ve dined at the Gallerie before, and have enjoyed many culinary events there (most recently a fantastic James Beard dinner), we were offered our first chance to stay in the hotel. 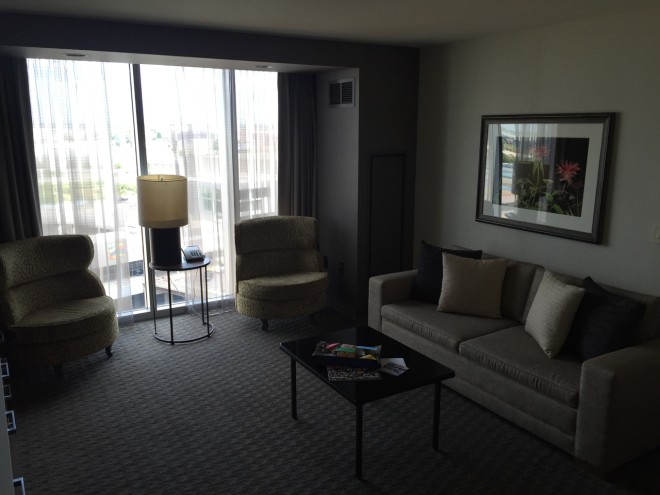 As you’d expect from a new hotel, the rooms are comfortable and beautifully appointed. 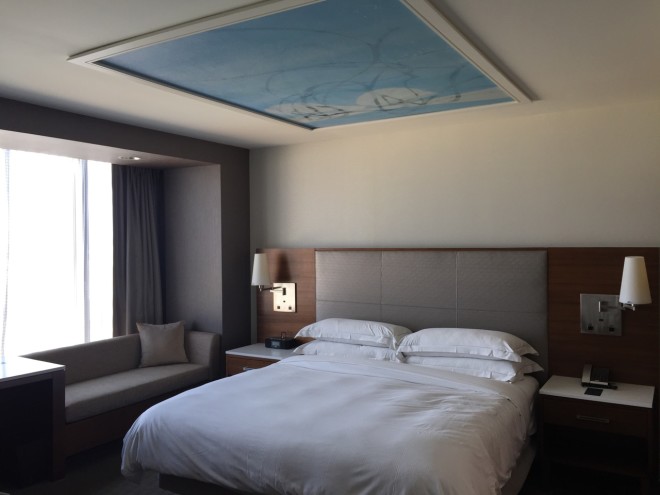 The emphasis on artwork is present everywhere in the hotel, from the meeting rooms to the restaurant to the lobby and common areas to the rooms. 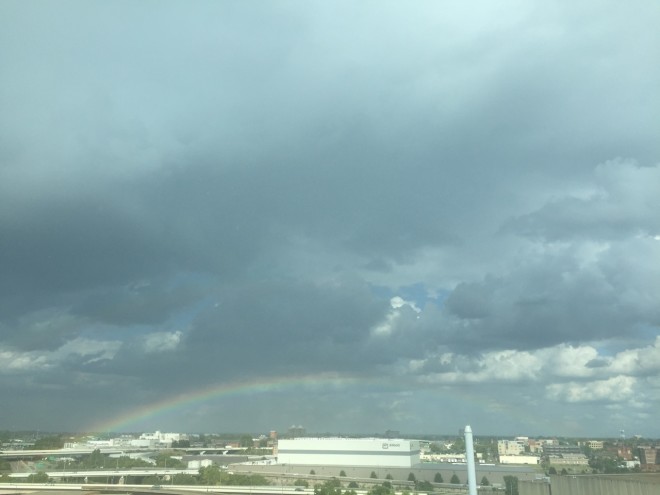 As luck would have it, a brief rainstorm rolled through just after we checked in, and a double rainbow (all the way across the sky) appeared over the city. 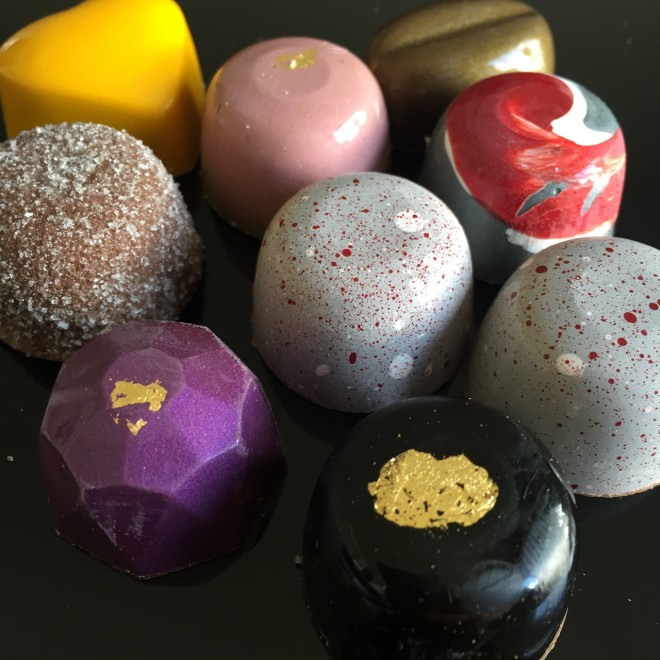 We were welcomed with a selection of chocolates from Le Chocoholique in Short North. Just look at the details on those. 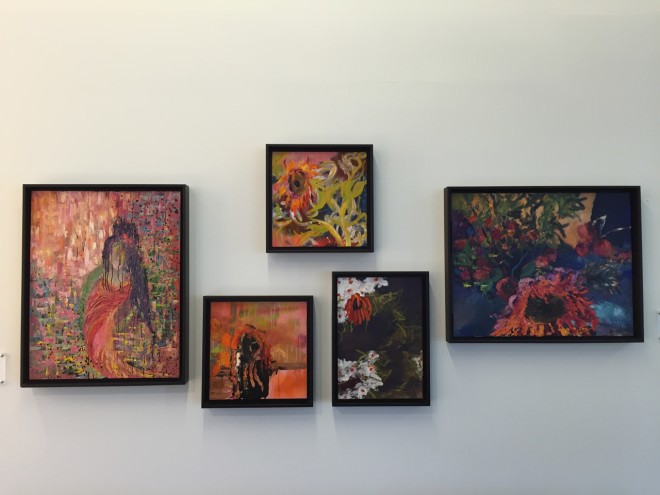 The entire hotel serves as a gallery, with a rotating selection of artists featured throughout the building. 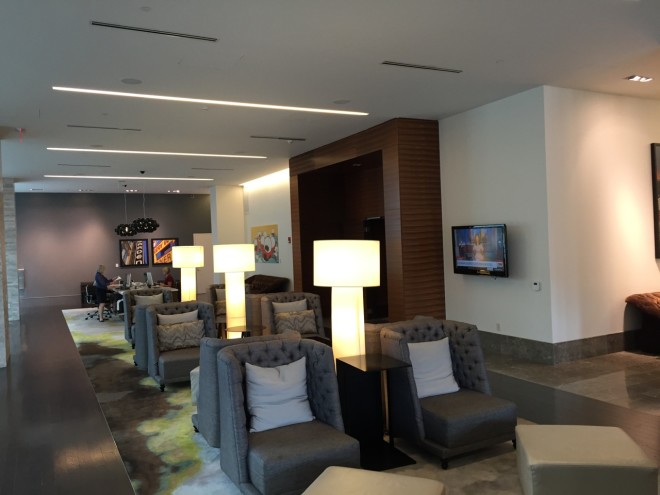 The second floor above the lobby features an open lounge and work area, complete with desk space for the business traveler (and more artwork, including a couple pieces we spied from Adam Brouillette). 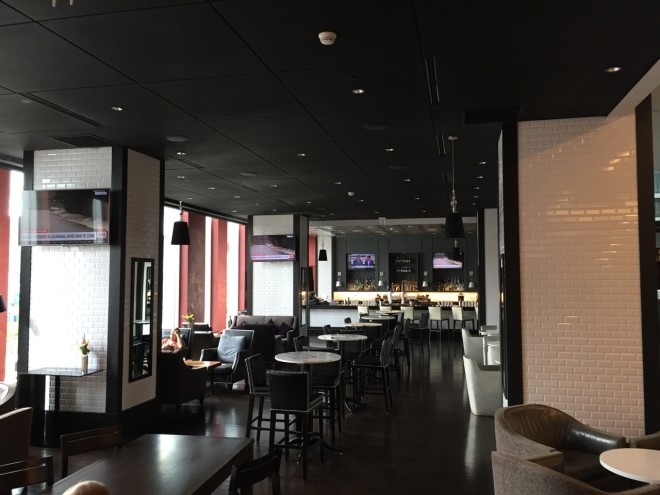 The Gallerie Bar & Bistro is located on the second floor of the building as well, with a bar featuring plenty of open space and views of High Street. 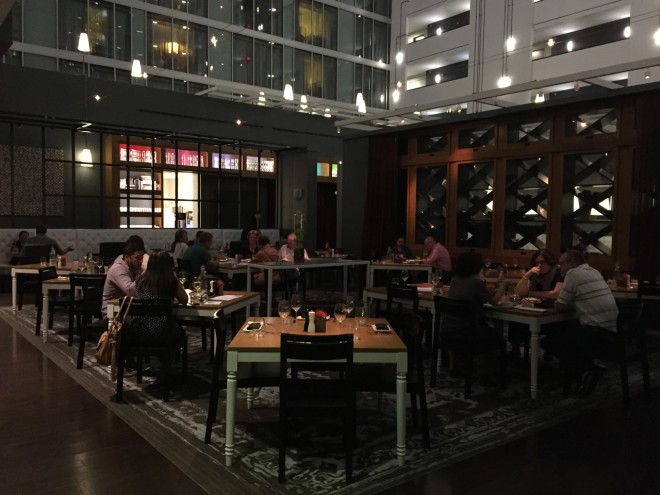 That evening we enjoyed dinner at the Gallerie. The restaurant sits at the bottom of open courtyard of the hotel; while you dine you have a full view of hotel interior, up to the skylights stories above you. 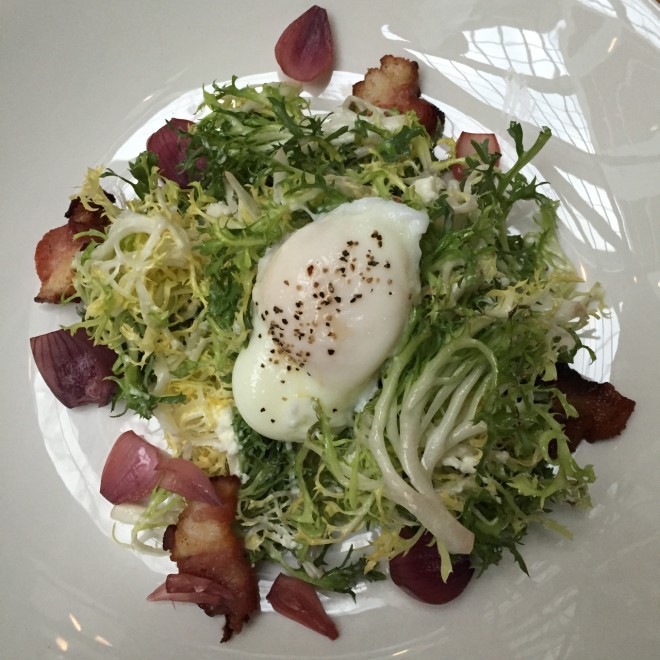 If you’ve never been to the Gallerie, it’s one to put on your list for date night, dinner with friends, or to impress out-of-town visitors. Or just for a lovely dinner out. We started with the Bistro Salad, a holdover from Chef Bill Glover’s days owning Sage American Bistro in Old North. The salad mixes frisee, red onion, goat cheese, a light vinaigrette, crispy lardon (pork fat!), and a poached egg. You poke that egg and mix the warm yolk with the salad, and it’s top notch. 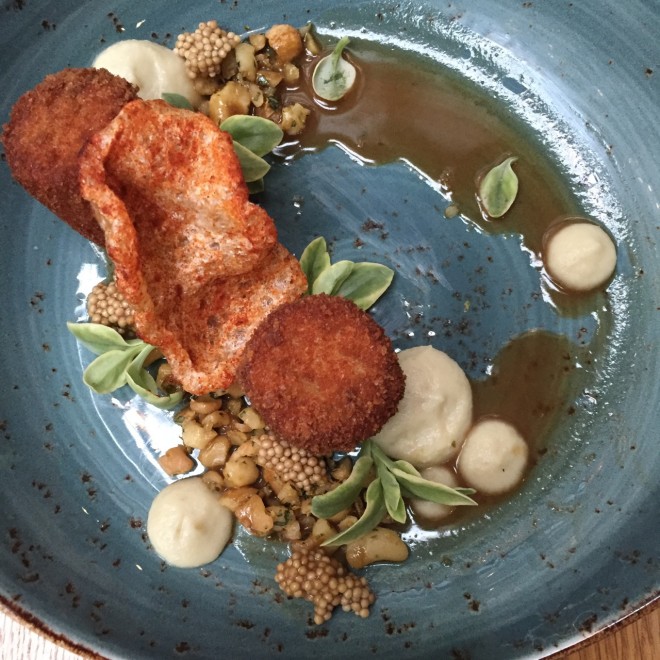 We also sampled a newer item, the croquettes made with Anderson Farms pork. Anderson Farms is owned by Jamie Anderson of Ray Ray’s Hog Pit. The croquettes feature shredded pork and are adorned by pickled mustard seeds, a sweet apple puree, a cashew gremolata (a mixture with herbs and a touch of citrus), and a jus. The croquettes were best when split open and dipped into the accompanying elements, so you’re getting pork swirled with apple, cashew, mustard seeds, etc. And it’s all supplemented with a crispy pork skin. 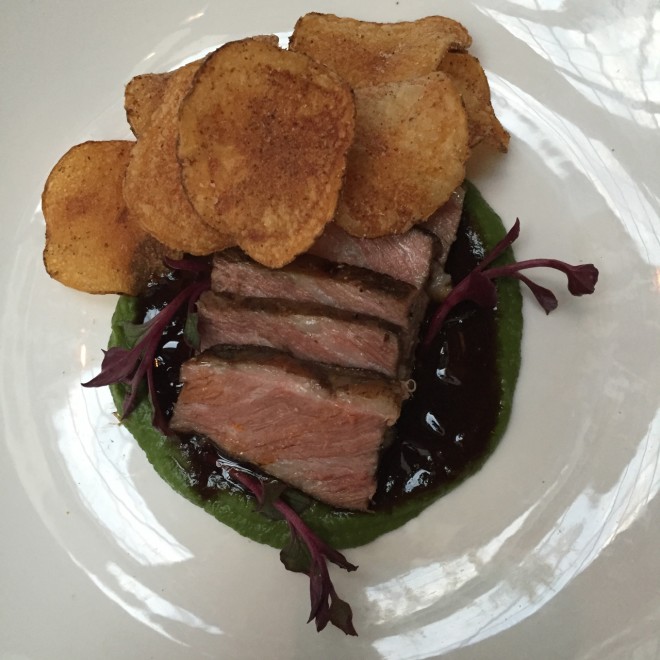 The 72-Hour Short Rib sat on a bed of pea puree and a caramelized onion jus. The short rib was so tender it simply melted in your mouth. There’s the interesting addition of smoke and vinegar chips, which provided a little zesty bite if eaten with the short rib, although they were stellar on their own. 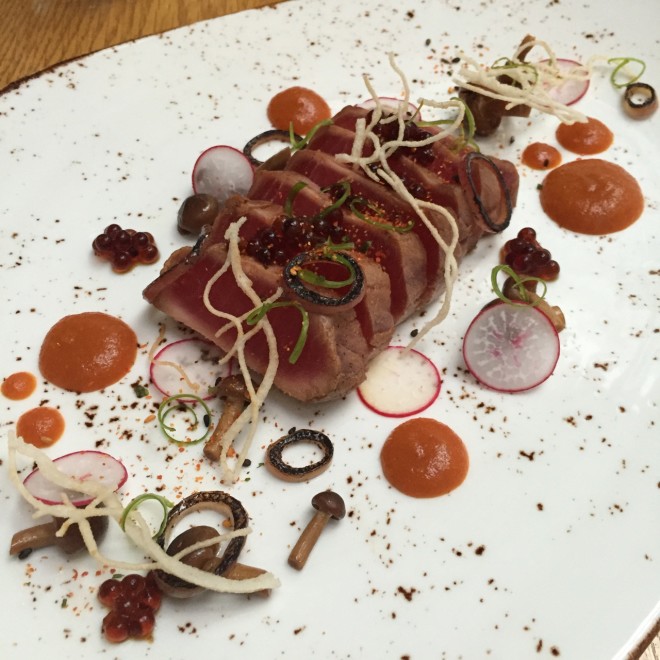 The Rare Tuna was the most beautifully presented dish of the night. The slices of tuna were decorated with rice noodles, a kimchi puree, pickled beech mushrooms, radish, soy pearls, bruleed onion, and dashes of togarashi, a Japanese chili pepper. 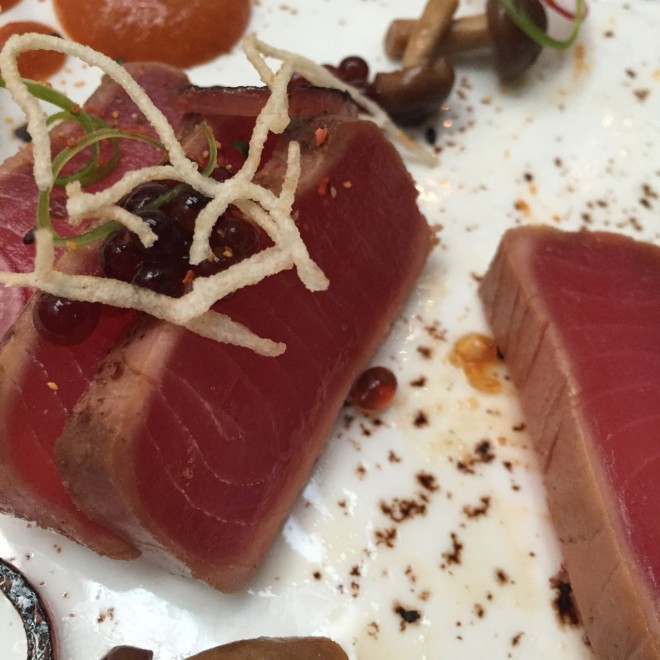 I mean, look at that tuna! Each bite was something different, from the earthy mushrooms to the sharp kimchi puree to the soy pearls that burst in your mouth. 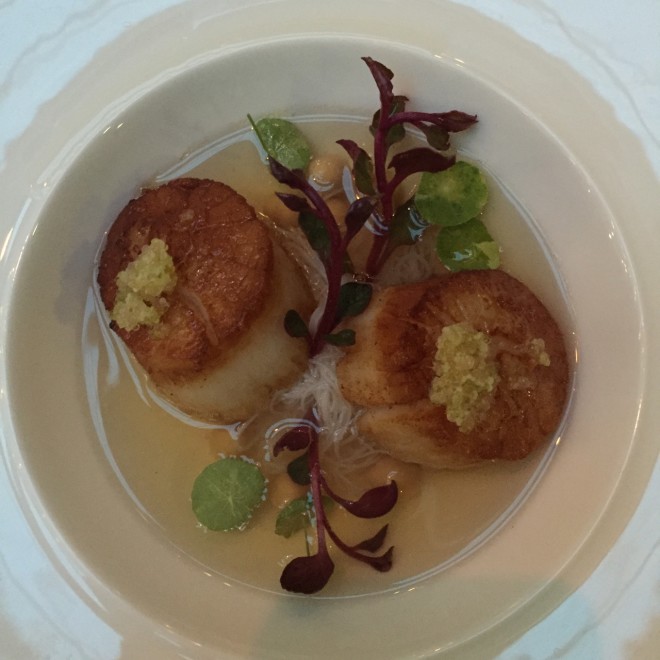 Our final course were the seared scallops in a bowl of sea truffle broth with vermicelli, chickpeas, a little mixture of finger limes and caviar, plus nasturtium and spinach (the greens). The scallops were perfect, and we found ourselves sipping every ounce of that broth. 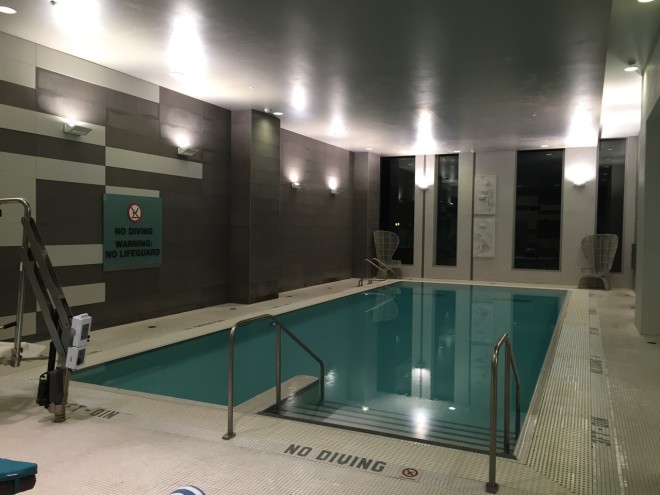 We decided to save dessert for later, so after dinner we took a swim in the hotel pool. 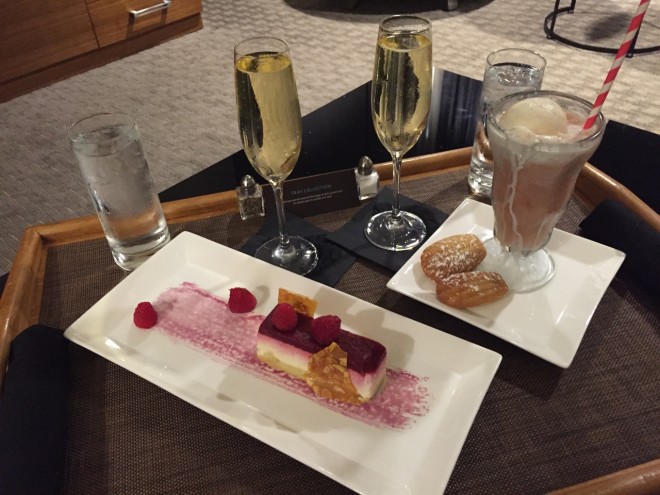 And then ordered room service, complete with champagne. 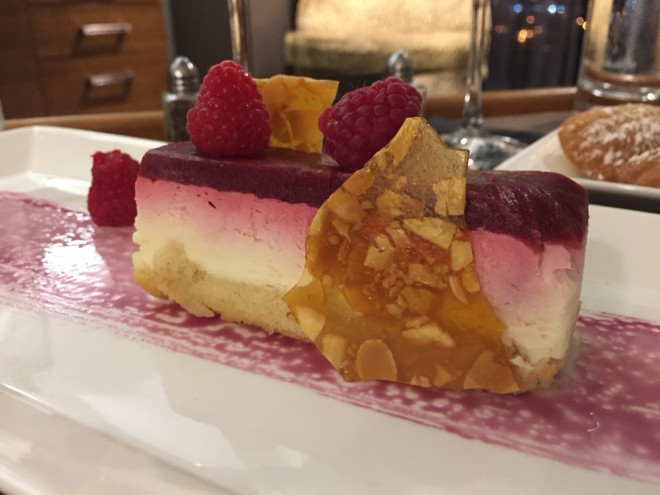 We sampled a toasted almond cake with rose-scented Bavarian cream and raspberry gelee with almond glass. 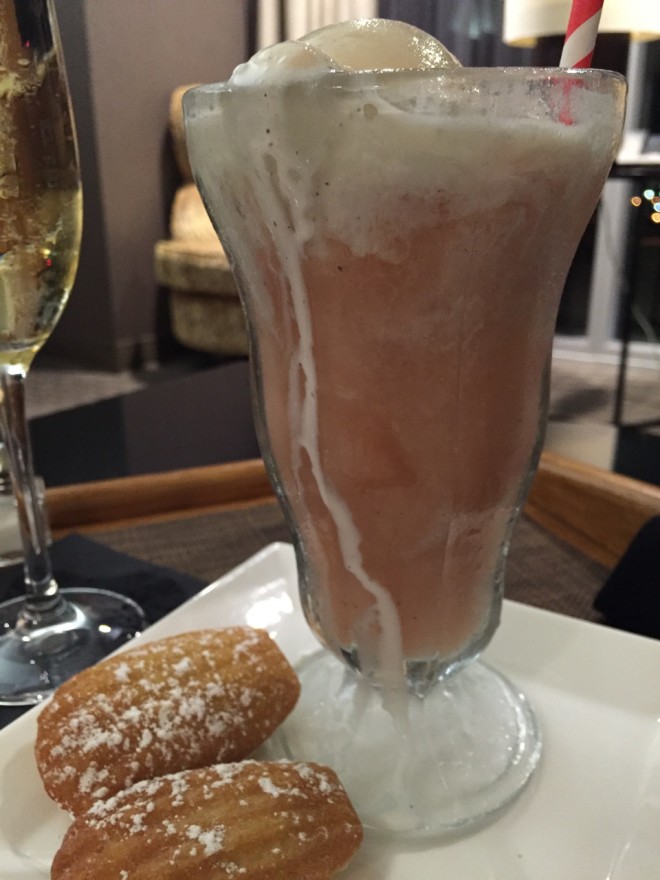 We also enjoyed a strawberry rhubarb float (seriously, what else goes with rhubarb?!) with ginger beer and vanilla ice cream, plus brown butter madeleines. 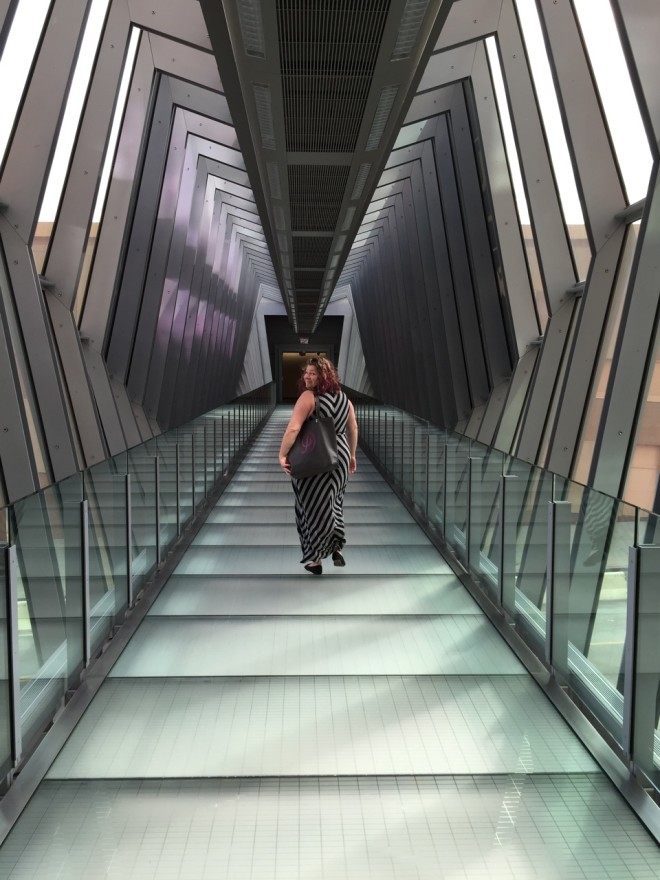 The next morning we enjoyed a delightful brunch at the Gallerie Bar & Bistro.

Thanks to everyone at the Hilton for a lovely experience! We look forward to coming back soon.

Full Disclosure: our hotel stay and dinner was provided by the Hilton Downtown Columbus.