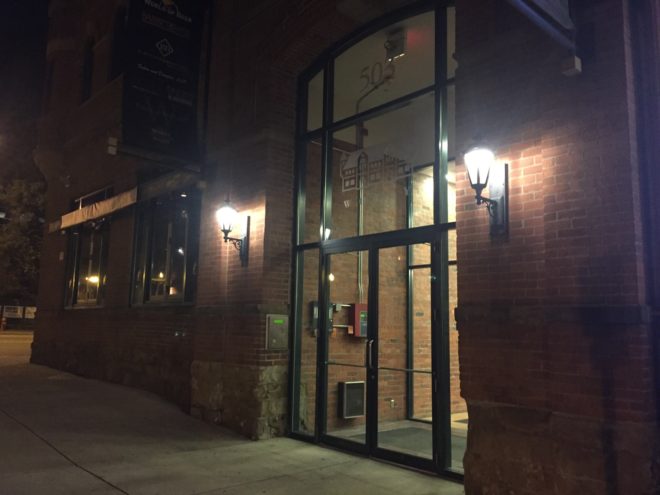 We’ve long viewed Rockmill Brewery as one of our favorite escapes from the city. The brewery is situated on an old horse farm in Lancaster, with rolling hills, a pond, a small chapel, firepits, patios, and a renovated barn as a taproom. Their new tavern in the Brewery District may not include those same rolling hills, but we’re happy they’ve brought that same vibe to the city. 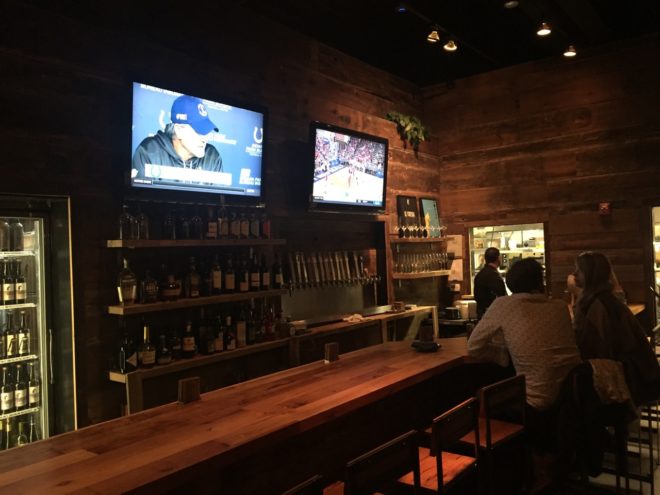 Like many people, we were first introduced to the Worley Building – once the stables for the old Hoster brewery a century ago – when it was the first World of Beer to open in Columbus. After World of Beer pulled out, Rockmill stepped in and renovated the two-level space, adding a kitchen. 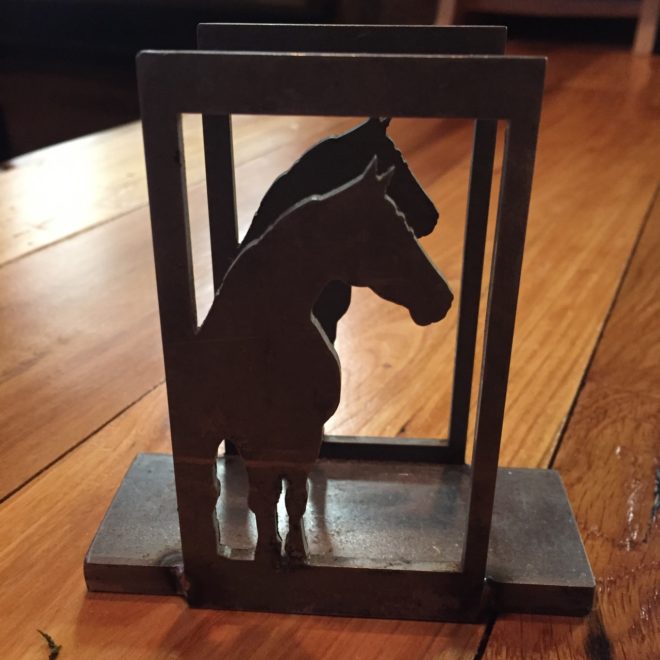 If you’re familiar with Rockmill’s brewery, you’ll see familiar themes throughout the space. 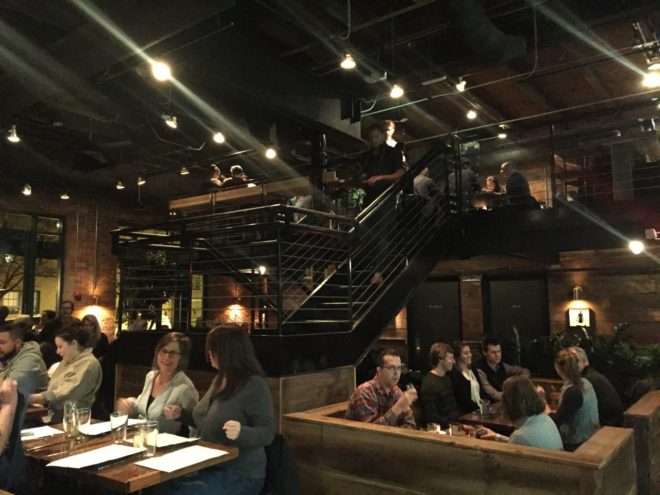 They’ve retained the overall shape of the space, although more seating areas are sectioned off and there’s an appropriately heavy natural wood theme, calling back to the Lancaster farm. 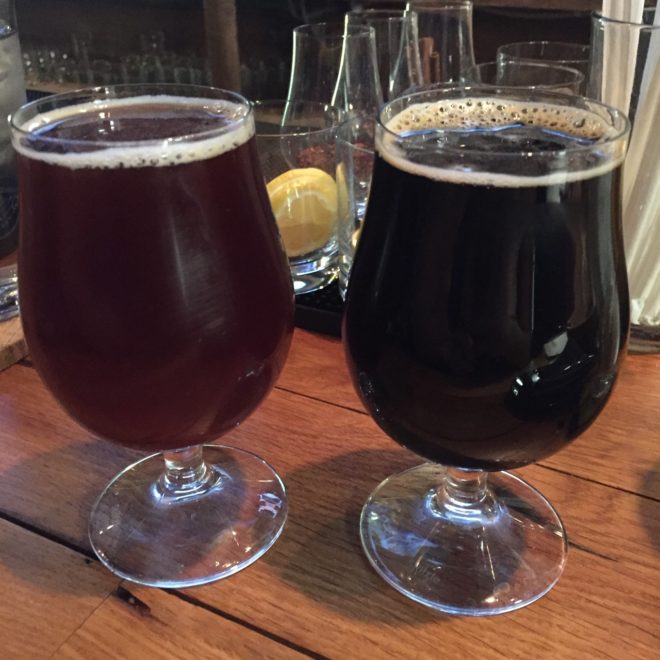 The full selection of Rockmill beers are on tap, from witbiers to saisons to stouts to cask specialties. We started with the Dubbel and the Cask Aged Noir (some of our favorites) while we waited at the bar. I will say this: Rockmill specializes in Belgian-style beers, so their creations are distinctive. If Belgians and farmhouse ales aren’t your beer of choice, you should still give them a chance. They’ve branched out a bit, adding things like the Rugged Expanse stout or the War on Wheat gluten free beer to the portfolio. 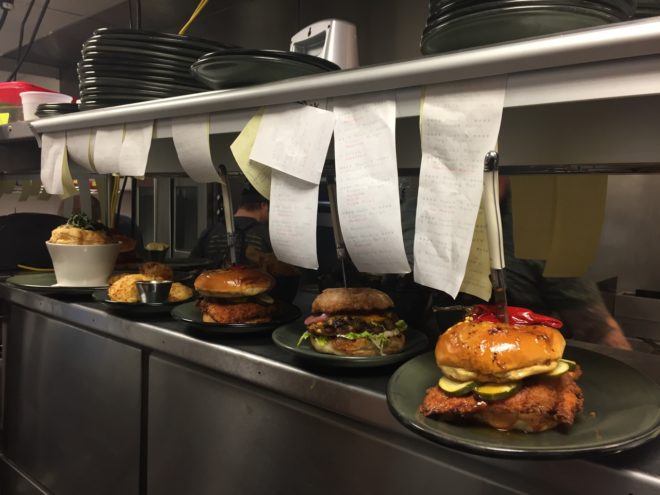 For a Tuesday night, the tavern was surprisingly busy. We didn’t make a reservation for the four of us, so we had to wait briefly at the bar (aw, shucks). We were seated within view of the kitchen, so we saw a continuous line of tavern burgers and spicy chicken sandwiches run through the pass. 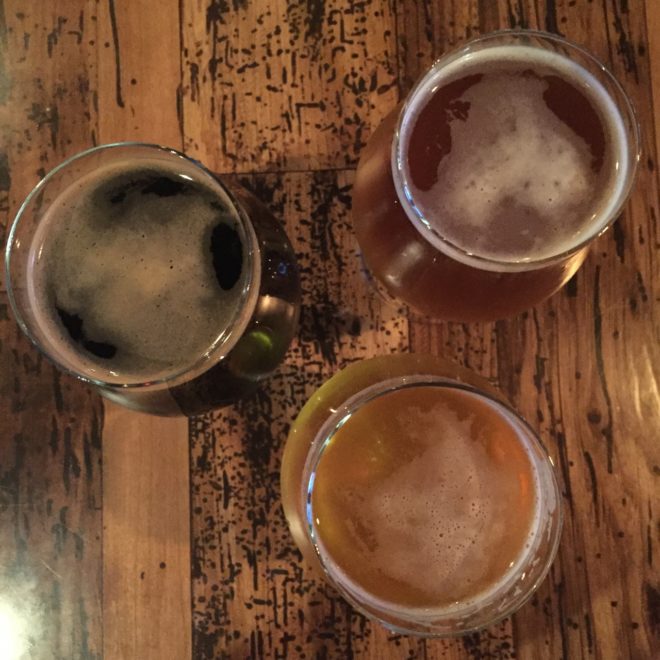 First order of business at the table: more beer. I moved on to the Saison Super, a maltier and slightly hoppier version of the saison. 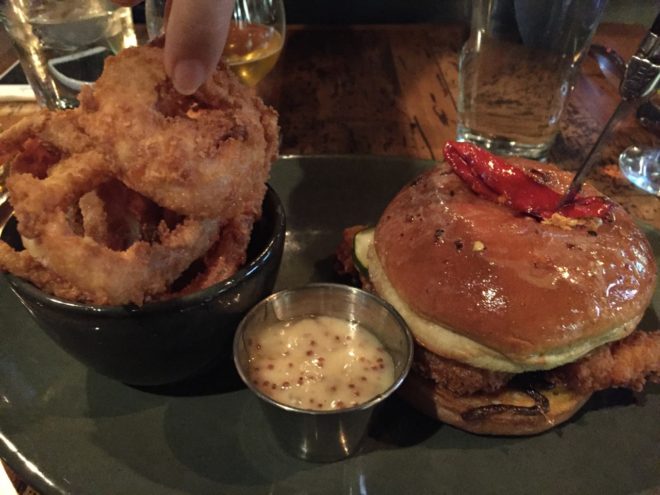 The menu is ordered quite simply as First & Main Dishes, Sides, and Desserts. While complex, it leans toward big, savory tavern foods: cheese and charcuterie, burgers, chicken sandwiches, pot pie, ribeye. The kitchen is headed up by Chef Andrew Smith, whose work we’ve gotten to know most recently at The Rossi and then Salt & Pine. 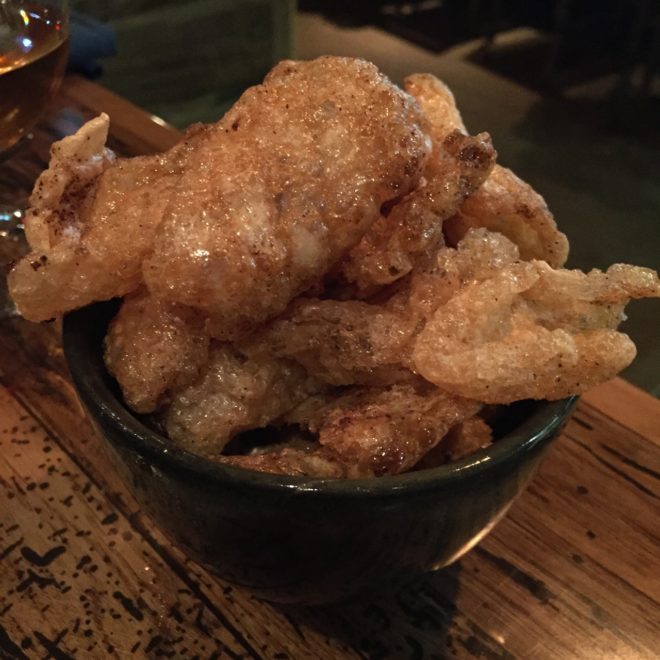 Our server accidentally brought me onion rings (which were delicious crispy) as a side with my sandwich, but she quickly remedied it and brought out the pork rinds I ordered. Now, I’ve never really been a pork rind guy, but pork rinds like these could convert me. It helped that they came almost straight out of the fryer to our table, so they were hot, crispy, and salty. They’re flavored with espresso, cinnamon, and cayenne. It’s the perfect snack for beer, of course, because you take a bite of pork rinds, then want a sip of beer, then want another bite of pork rinds, then a sip, then another bite, ad infinitum. 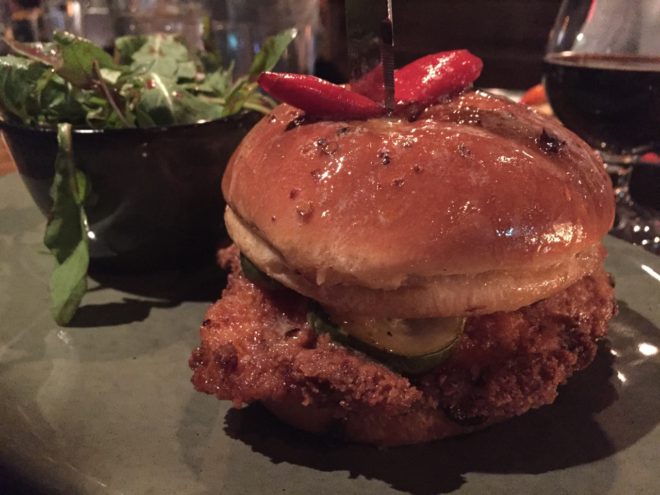 The spicy chicken sandwich is topped with bread and butter zucchini (in place of the expected pickles) and urfa mayo (urfa being Turkish red pepper flakes). The chicken was tender and crispy, and the bun slathered in a spicy honey butter, which means you’ll make a glorious mess of yourself while you eat it. The most important part: the spicy sandwich was a perfect counterpoint to the Saison Super. 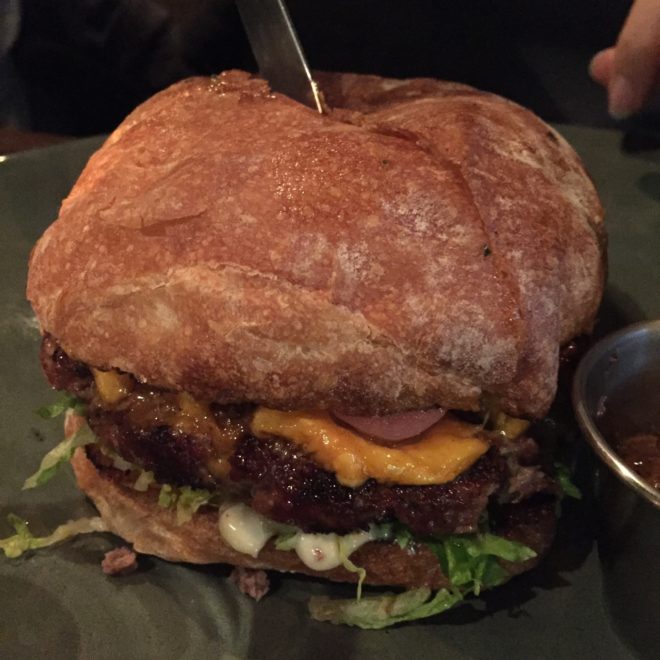 Same with the tavern burger. It was cooked just right, and balanced a sweet bacon jam with the zing of pickled onion and a sharp cheddar. 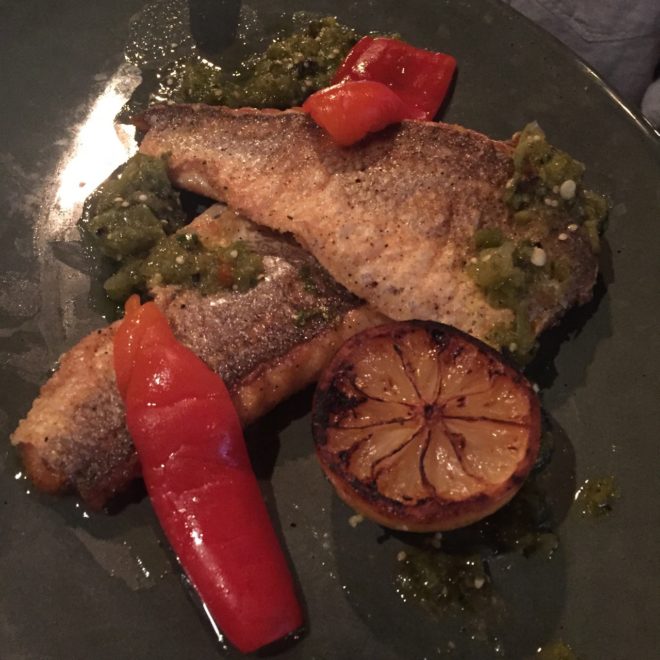 The fried branzino got a thumbs-up, too. Very tender fish paired with sweet chilis and a salsa verde with a tiny kick. 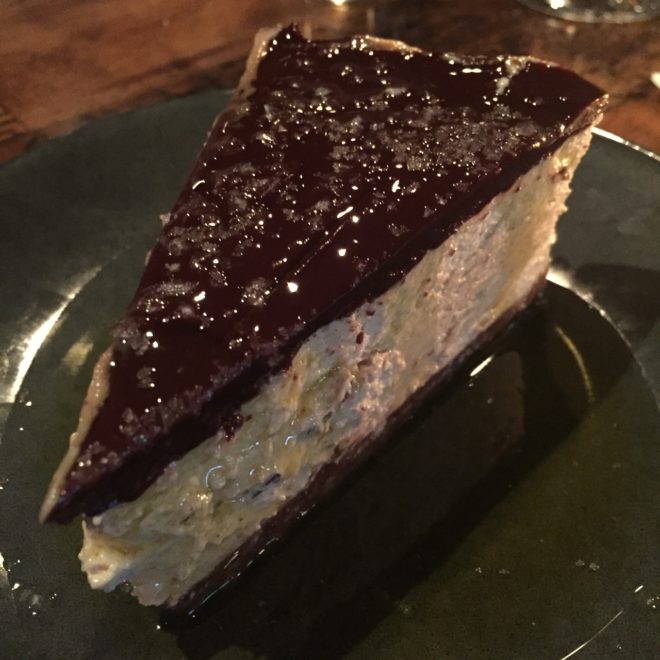 We finished off with a dessert of peanut butter pie, on the suggestion of our server. It marries a rich peanut butter with dark chocolate, sea salt, and – yes – olive oil. I love the sweet and salty, and liked the olive oil, too, but it is a particular flavor. Our table was divided on it.

All I can say at this point is that you should make Rockmill Tavern your next dining destination. As I’m sure they intended, Chef Smith’s menu is an ideal counterpart to the brews. I also love what they’ve done with the space, and that we have a place to easily sample the full range of Rockmill beers here in town.